About half of Americans think former President Donald Trump should face criminal charges for his role in the deadly insurrection that took place at the U.S. Capitol on Jan. 6, 2021, according to the latest PBS NewsHour/NPR/Marist poll. But far fewer – roughly a quarter – think Trump will actually be prosecuted.

Since hearings by the House committee investigating the attack began in June, new evidence and testimony have revealed how much Trump and members of his administration knew about the potential for violence, as well as the former president’s embrace of his armed supporters and his unwillingness to intervene when chaos overwhelmed the Capitol.

While a majority of Americans overall blame Trump for what happened that day, public opinion remains divided down party lines, according to this last poll. Nearly all Democrats – 92 percent – and a majority of independents but only about one in five Republicans agree. 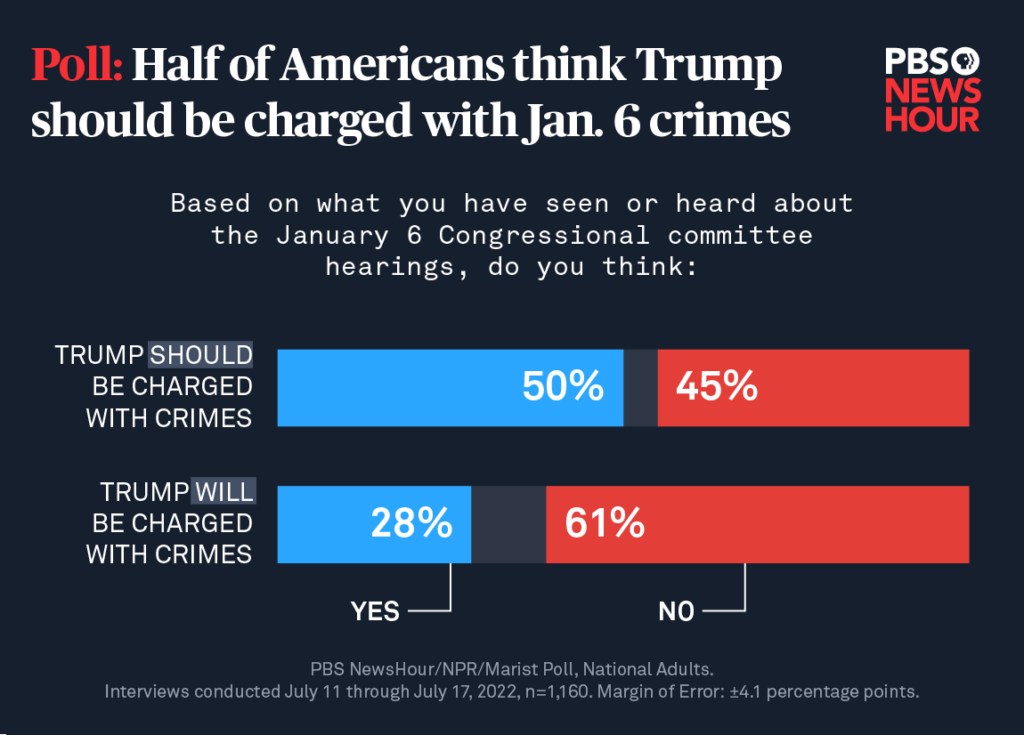 The final scheduled Jan. 6 hearing is slated to start Thursday at 8 p.m. ET and is expected to offer a minute-by-minute account of what Trump did and didn’t do as the Capitol was overrun. In September, the committee is scheduled to release a report of its findings.

Meanwhile, federal prosecutors responsible for charging suspects related to the attack have also been watching the hearings. Unlike Congress, “We do not do our investigations in public,” Attorney General Merrick Garland said at the Justice Department Wednesday.

Garland’s staff is engaged in “the most wide-ranging investigation and the most important investigation that the Justice Department has ever entered into,” he said during a briefing, vowing to “hold accountable every person who is criminally responsible for trying to overturn a legitimate election, and we must do it in a way filled with integrity and professionalism.” So far, close to 900 people have been arrested in connection to the attack, according to Politico. Garland also said that they had to get it right because the probe “cuts at the fundamental of American democracy.”

Half of Americans say the events of Jan. 6, 2021 at the U.S. Capitol amounted to an insurrection and a threat to democracy. That includes 86 percent of Democrats, 52 percent of independents and 12 percent of Republicans.

In contrast, Republicans are more likely than any other group – at 40 percent – to view that day as an act of political speech protected by the First Amendment, along with 19 percent of Americans overall. Forty percent of Republicans also said it was an unfortunate event that should reside in the past, as did a quarter of all U.S. adults.

More than a year and a half since Trump left office, 58 percent of Americans hold an unfavorable view of him, according to this latest poll. That includes 89 percent of Democrats and 63 percent of independents. But 83 percent of Republicans say they still favor Trump, along with roughly a third of all Americans.

Trump’s favorability among the GOP outpaces that of a handful of other Republicans who are considered potential rivals for a White House bid in 2024:

According to GOP strategist and conservative pollster Whit Ayres, most Republicans are “also open to having a new candidate who carries less baggage than they believe Trump carries as their nominee in 2024.”

Trump’s political resilience is unlike anything else in U.S. presidential history, said Jeffrey Engel, who directs the Center for Presidential History at Southern Methodist University in Dallas.

“As with everything with Donald Trump, history gives us no guide,” Engel said.

“As with everything with Donald Trump, history gives us no guide.”

One comparison is tough to ignore, though today’s political dynamics are nearly opposite. In 1974, after an investigation uncovered that President Richard Nixon’s reelection campaign had bugged the phones at the Democratic National Committee headquarters, Nixon resigned in disgrace before he could be impeached. He retreated from public life and partially rebuilt his reputation in foreign policy during the decades that followed, Engel said.

From the Reagan administration onward, presidents sought Nixon’s advice on different policy matters, but they avoided sharing the limelight with him. If political campaign websites had existed, Engel said, no one would have promoted splashy photos of Nixon posing with their candidate. In today’s political environment, the same is not true for Trump and GOP hopefuls.

Following Nixon’s fall from power, Engel said, “There was no one in the Republican Party who said, ‘You know what would be good? Let’s make Nixon our standard bearer.’”

To understand Trump’s hold among Republicans, Ayres said the Jan. 6 hearings are “the wrong place to look,” and that a majority of Republicans would vote for Trump again if that meant getting rid of President Joe Biden.

Who is following the Jan. 6 hearings?

The hearings are unlikely to be a factor in shaping Republican views because most say they are paying little to no attention to the investigation. According to this latest poll, 58 percent of Americans said they were paying at least some attention to the hearings, while another 41 percent said they were paying little to no attention, including 56 percent of Republicans. Democrats are the most reliable audience for the Jan. 6 hearings, with 80 percent following along.

“​​It’s almost an article of faith for a Republican to say, ‘I’m not paying attention to this stuff,’” Ayres said.

For Democrats, abortion ranked as the top concern. Following the Supreme Court’s overturning of Roe v. Wade and the loss of federal protections for the medical procedure in June, 29 percent of Democrats and 18 percent of Americans overall picked abortion as what matters most to them. 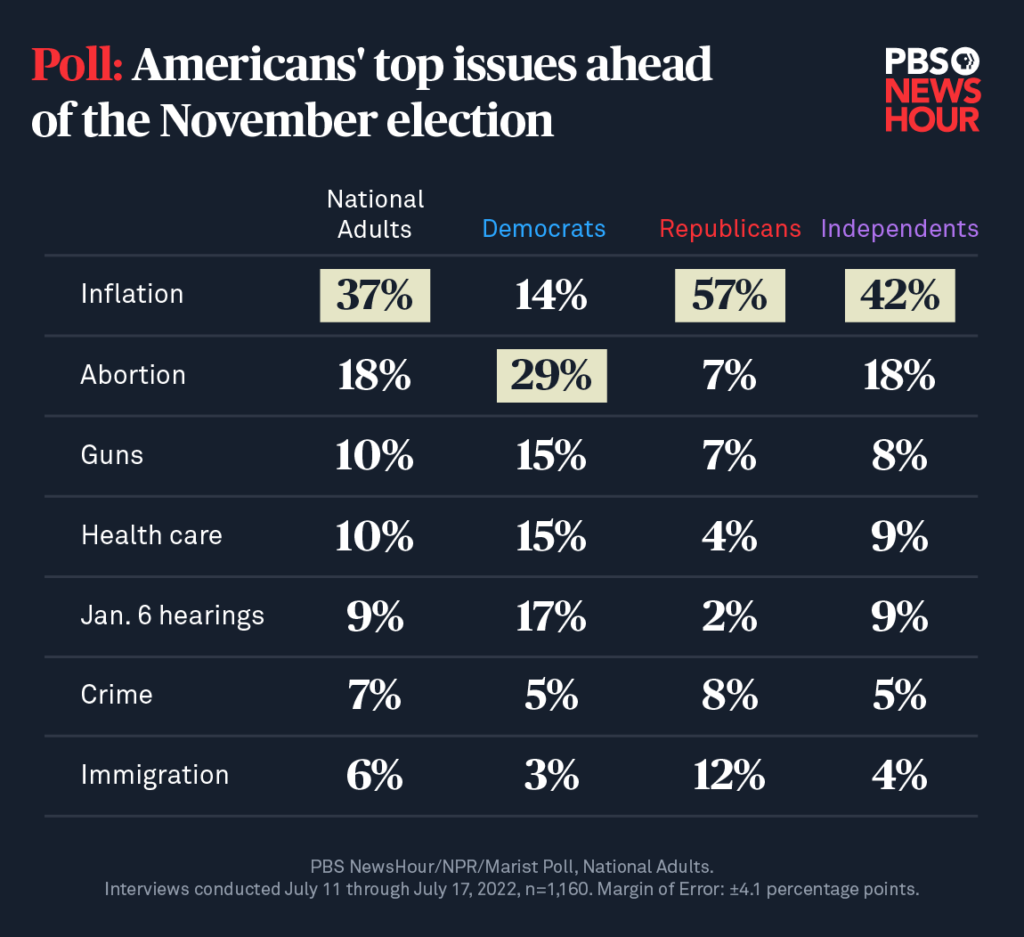 So much can change between summer and November, but Neil Malhotra, a political economist at Stanford University, said people will vote for candidates who champion policies that make their “lives tangibly better.” The threat of American democracy unraveling is harder to grasp.

“People are struggling in this economy. They’re struggling with prices. It’s nice to care about democracy, but for most people, it’s these tangible issues” that matter most, Malhotra said. “It’s not that people have short memories — life gets in the way.”

At the same time, American confidence in the fate of democracy amid division and sedition remains about as fragile today as it was in the days after the insurrection, with 77 percent of U.S. adults saying they are concerned about the future.

Left: So far, the Jan. 6 hearings have revealed new facts about Trump’s role, but 41 percent of Americans say they aren’t really paying attention, according to the latest PBS NewsHour/NPR/Marist poll. Photo by Drew Angerer/Getty Images