The race factor in this year’s elections

The race factor: Last week, we noted the importance of women in elections and why Democrats were targeting them. Today, we look at the race factor and the importance of minority voters. The man in charge of trying to get Democrats elected to the House, Steve Israel, chairman of the Democratic Congressional Campaign Committee, was asked on CNN how much race motivates the Republican base. “Not all of them, no, of course not, but to a significant extent, the Republican base does have elements that are animated by racism,” he said. “And that’s unfortunate.” Greg Walden, head of the National Republican Congressional Committee, called the comments “wrong and unfortunate,” citing instead “executive overreach” for the virulent opposition from the conservative base to the Obama administration.

Speaking out: President Barack Obama’s attorney general, Eric Holder — the nation’s first black attorney general — in a speech before Al Sharpton’s National Action Network last week said he and the president had faced “unprecedented, unwarranted, ugly and divisive adversity.” Mr. Obama, for his part, speaking before the same group Friday, said voting rights had become more “threatened” today than at any time “since the Voting Rights Act became law nearly five decades ago.” Even former President Bill Clinton, aka Bubba himself, called out the Supreme Court for its ruling rolling back parts of the Voting Rights Act. “We all know what this is about,” Clinton said, adding, “Is this what Martin Luther King gave his life for?”

Factor those numbers out to what they mean to some key Senate races this fall: 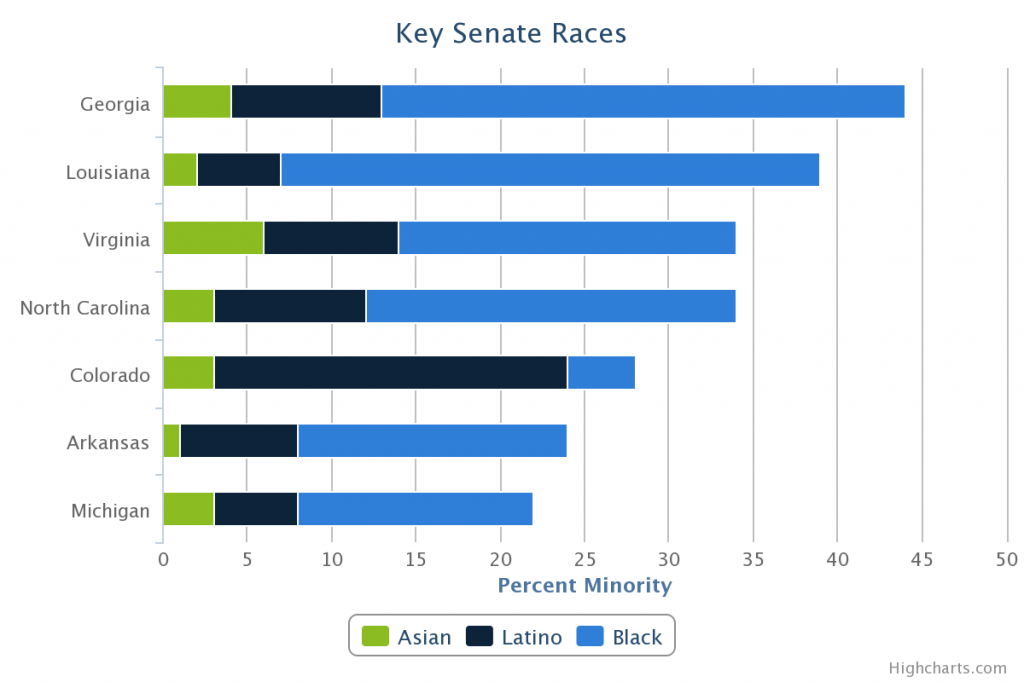 Us vs. Them: Speaking of changing demographics, a new study by researchers at Northwestern University finds that when whites are told about racial minority groups potentially becoming a majority of the population in coming years, they are more likely to vote Republican. Chew on that… By the way, with Congress out on recess for the next two weeks, Democrats will be working to paint themselves as the “fair shot” party.

2016 – Rand Paul going Sister Souljah: GOP hopefuls got an early chance to test their messages for retaking the White House this weekend in New Hampshire. The Freedom Summit, sponsored by the Americans for Prosperity Foundation and Citizens United, drew a wide swath of today’s conservatives, from former Arkansas Gov. Mike Huckabee to Donald Trump. But Sen. Ted Cruz, R-Texas, and Sen. Rand Paul, R-Ky., stole the show. Paul tapped into one of the party’s most deep-seated problems: expanding their tent. “The door’s not going to open up to the African-American community, to the Hispanic community, until we have something to offer,” he said. He urged the party to take note that minorities are overrepresented in American prisons. But mention of the more establishment-backed Jeb Bush’s line last week that illegal immigration comes from “an act of love” generated boos from the crowd. In Iowa, Rep. Paul Ryan, R-Wis., spoke Friday night at the GOP spring fundraising dinner about uniting the party, but notably, he did not meet with any state activists during his trip. … In the week ahead, former Sen. Rick Santorum is addressing two Charleston GOP groups in South Carolina Monday, while Cruz heads to The Citadel Tuesday for a Free Enterprise Foundation dinner. Former Secretary of State Condoleezza Rice speaks about the legacy of the Civil Rights Act Thursday at the University of Minnesota.

2016 – That’s why they’re here: On the Clinton beat, Rosalind Helderman examines Hillary Clinton’s mutually beneficial relationship with Boeing. It’s the kind of vetting story that reads more like April of 2015, not 2014. … Maryland Gov. Martin O’Malley is earning his fundraising chops traversing the country — speaking in Wisconsin on Saturday and headed to Kentucky for Secretary of State Alison Lundergan Grimes on Thursday. He’ll also soon be in Florida, Michigan, Maine and Pennsylvania.

Daily Presidential Trivia: On this day in 1865, John Wilkes Booth assassinated President Abraham Lincoln at Ford’s Theatre in Washington, D.C. Trivia Question: Who else did Booth and his co-conspirators plan on killing that night? Be the first to Tweet us the correct answer @NewsHour, @rachelwellford, @DomenicoPBS, and you’ll get a Morning Line shout-out.

To wrap up this jam sesh, one of my personal favorites: Tubthumping by Chumbawamba https://t.co/c5t0QLtR0C #DJRandPaul over & out.

Left: Attorney General Eric Holder told the audience at the annual National Action Network convention in New York April 9 that he and the president had faced "ugly and divisive adversity." Photo by J. Countess/Getty Images