WASHINGTON (AP) — The phone call State Department official David Holmes overheard between President Donald Trump and Ambassador Gordon Sondland during a lunch in Ukraine was so distinctive — even extraordinary — that no one needed to refresh his memory, according to testimony released late Monday in the impeachment inquiry.

“I’ve never seen anything like this,” Holmes told House investigators, “someone calling the President from a mobile phone at a restaurant, and then having a conversation of this level of candor, colorful language. There’s just so much about the call that was so remarkable that I remember it vividly.”

Holmes’ account of the conversation in Kyiv is the first with Trump personally calling about the investigations into Democrats and Joe Biden that are central to the impeachment inquiry.

A transcript of Holmes’ closed-door testimony was released Monday. Holmes, a political counselor at the U.S. Embassy in Ukraine, is scheduled to testify publicly Thursday. 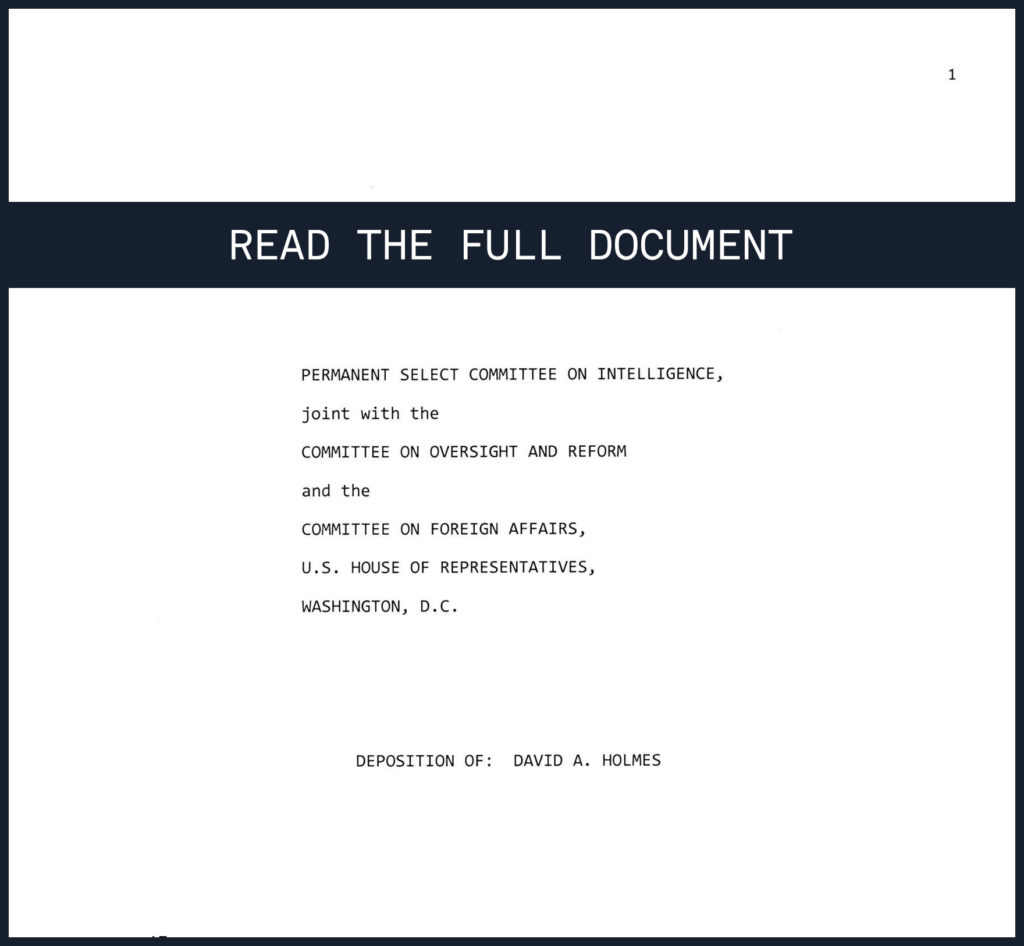 The conversation between the president and the ambassador July 26 came one day after the call between Trump and Ukraine President Volodymyr Zelenskiy that led to the impeachment inquiry.

Holmes, who joined Sondland and others during the lunch meeting, told investigators Trump was talking so loudly he could hear the president clearly on the ambassador’s phone.

“I then heard President Trump ask, quote, ‘So he’s going to do the investigation?’” Holmes testified. “Ambassador Sondland replied that ‘He’s going to do it,’ adding that President Zelensky will, quote, ‘do anything you ask him to.’”

Holmes said he didn’t take notes of the conversation he overheard between Trump and Sondland but remembers it “vividly.”

Pressed during the interview if anyone helped him recall the details, Holmes said, “that wouldn’t have been needed, sir, because, as I said, the event itself was so distinctive that I remember it very clearly.”

A transcript was also released late Monday from an interview with David Hale, the State Department’s No. 3 official.

Hale is scheduled to testify publicly Wednesday. He was questioned earlier this month about the removal of the U.S. ambassador to Ukraine, Marie Yovanovitch.

Left: David Holmes, the counselor for Political Affairs at the U.S. embassy in Ukraine, arrives to appear for a closed-door deposition as part of the impeachment inquiry into U.S. President Donald Trump on Capitol Hill in Washington, U.S., November 15, 2019. REUTERS/Yara Nardi