Laura Cooper, the deputy assistant secretary of defense for Russia, Ukraine and Eurasia, said the Ukrainian embassy was asking questions about U.S. aid as early as July 25–the same day as a phone call in which President Donald Trump asked Ukraine’s president to investigate the Bidens.

Cooper provided the new information Wednesday in an addendum to her prepared opening statement during a public hearing before the House Intelligence Committee as part of the impeachment probe into Trump.

Cooper also said she attempted to get the delay on U.S. aid to Ukraine lifted after she learned that it was being put on hold. She said she never talked to Trump about the delay in funding, but advocated for a meeting of Cabinet-level officials with Trump.

Cooper is testifying on Wednesday afternoon alongside David Hale, the undersecretary of state for political affairs.

READ AND WATCH MORE: Guide to the impeachment hearings

Their testimony comes on the same day as Gordon Sondland, the U.S. ambassador to the European Union. Sondland testified that there was a “quid pro quo” with Ukraine. Specifically, Ukraine needed to investigate the 2016 presidential election and the Ukrainian energy company, Burisma, in exchange for a meeting with Trump and U.S. aid. 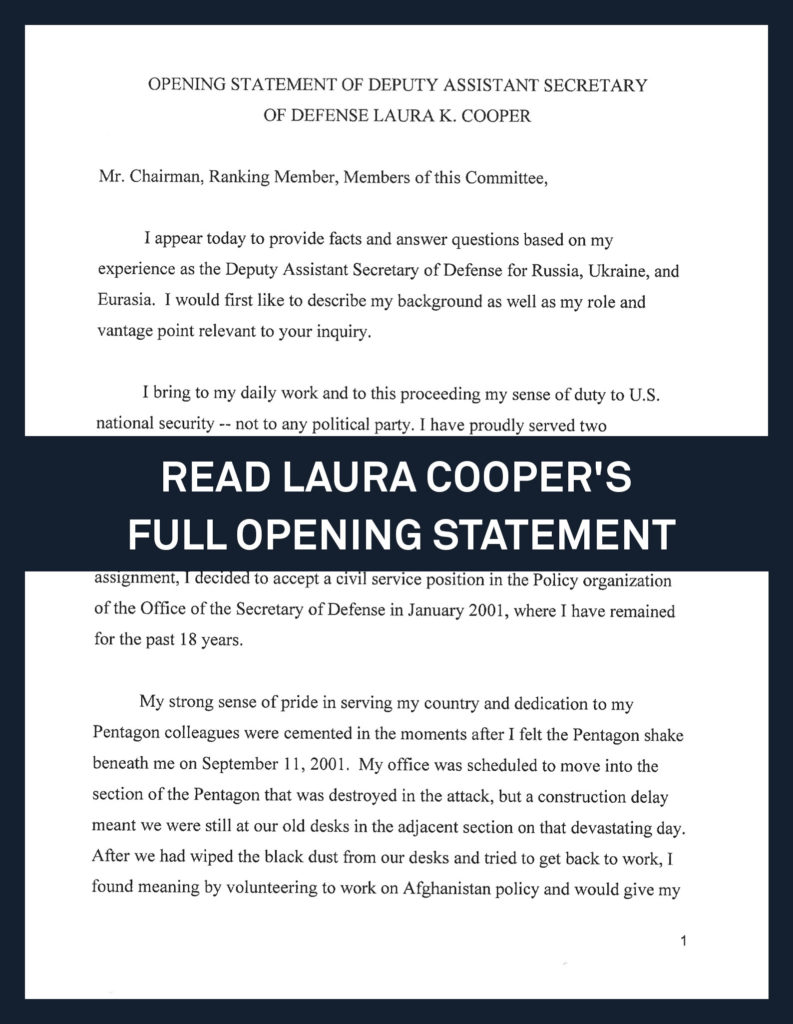 That concludes my opening statement. But before answering your questions, there is one other matter that I would like to address.

I testified in a deposition before this Committee and other Committees on October 23rd, 2019. At that time, I was asked questions about what I knew about when the Ukrainian government may have learned about any hold on security assistance funds.

I answered those questions based on my knowledge at that time. Since my deposition, I have again reviewed my calendar, and the only meeting where I recall a Ukrainian official raising the issue with me is on September 5th at the Ukrainian Independence Day celebration.

I have however since learned some additional information about this subject from my staff.

Specifically, on the issue of Ukraine’s knowledge of the hold, or of Ukraine asking questions about possible issues with the flow of assistance, my staff showed me two unclassified emails that they received from the State Department.

My staff also advised me in the last few days of the following additional facts that may be relevant to this inquiry. (Again, my staff does not recall informing me about them, and I do not recall being made aware of this.)

On July 3rd, at 4:23 p.m., they received an email from the State Department, stating that they had heard that the CN is currently being blocked by OMB. This apparently refers to the congressional notification State would send for Ukraine FMF. I have no further information on this.

On July 25th, a member of my staff got a question from a Ukraine embassy contact asking, What was going on with Ukraine’s security assistance? Because at that time, we did not know what the guidance was on the USAI, the OMB notice of apportionment arrived that day, but the staff member did not find out about it until later, I was informed that the staff member told the Ukrainian official that we were moving forward on the USAI but recommended that the Ukraine embassy check in with State regarding the FMF.

Sometime during the week of August 6 to 10, a Ukraine embassy officer told a member of my staff that a Ukrainian official might raise concerns about security assistance in an upcoming meeting. My understanding was that the issue was not, in fact, raised. Again, I have no further information about what concerns about the security assistance Ukraine may have had at that time.

My staff also recalled thinking that Ukrainians were aware of the hold on security assistance during August, but they cannot pinpoint any specific conversations where it came up. My staff told me they’re aware of additional meetings where they saw officials from the Ukrainian embassy in August, and they believe that the question of the hold came up at some point. But they told me they did not find any corresponding email or other records of those meetings.

Consequently, neither they nor I know precisely when or what additional discussions may have occurred with the Ukrainians in the month of August. If I had more details on these matters, I would offer them to the Committee. But this is the extent of the additional information I have received since my deposition.

Mr. Chairman, I welcome your questions. I will answer them to the best of my ability. Thank you.