What are these documents exactly?

These are the affidavits and search warrants which gave officers the legal authority to search Cohen’s homes and offices in 2018. In them, officials in the Southern District of New York laid out their suspicions about Cohen, how they planned to investigate and why those warrants were needed.

Read the original documents below.

Released months after they were first requested by news organizations, the documents are an early outline of the cases against Cohen, which played out in two separate investigations, one by Mueller’s team and another by federal prosecutors in New York. They also point to the cache of evidence the special counsel’s office has from Cohen and raise questions about who else may be tainted by it.

Was there any new information in the documents?

The filings reveal that in July 2017, when Cohen was still referring to himself as the “personal attorney to President Donald J. Trump,” the FBI obtained search warrants for Cohen’s email. Investigators specifically gained permission to search emails dating back to January 2016.

That period included the first few months of Trump’s presidency, as well as much of the 2016 campaign. Those are also key, disputed months in terms of Trump’s personal interest in Russia.

Michael Cohen recently testified before Congress that Trump continued discussing a possible hotel deal in Russia through the first half of 2016. Cohen had previously testified that the discussions had stopped in early 2016, but later said that was a lie. The White House has repeatedly claimed that Cohen is now an unreliable witness who is inventing stories about Trump in order to gain sympathy in court and reduce his prison time. Cohen was sentenced to three years in prison after pleading guilty to lying to Congress and to several counts of campaign and finance violations.

Also of interest in the documents: nearly 20 pages devoted to Cohen’s “illegal campaign contribution scheme,” which were entirely redacted by the judge. That is likely a reference to the case in which Cohen pleaded guilty to paying off two women to keep their alleged affairs with Trump silent during Trump’s presidential campaign. Cohen has said Trump personally approved of and repaid him as part of that scheme, including making some payments as president in 2017. The White House has repeatedly said Cohen’s account is untrue.

What did the early stages of the investigation look like?

According to the court papers, authorities were eyeing Cohen for multiple crimes, including bank fraud and making illegal campaign contributions in the 2016 cycle.

A judge approved searches of Cohen’s Park Avenue apartment, downtown Manhattan office, a safe deposit box, hotel room and two Apple iPhones — leading to FBI raids that received significant media coverage last year. But the documents include some interesting details about the searches, such as a note that specifically gave investigators permission to “depress the fingerprints and/or thumbprints of Michael Cohen onto [his iPhone] or hold [the iPhone] in front of Cohen’s face … in order to gain access”.

What’s not in the documents?

While these are high-profile court papers, they do not substantially add to what we already know about the actions of Cohen or anyone else in the Trump campaign or Trump Organization.

But the court filings underline one key aspect of Mueller’s investigation: The special counsel appears to have far more documents than the public knows about — and his team has had those documents for a significant amount of time. 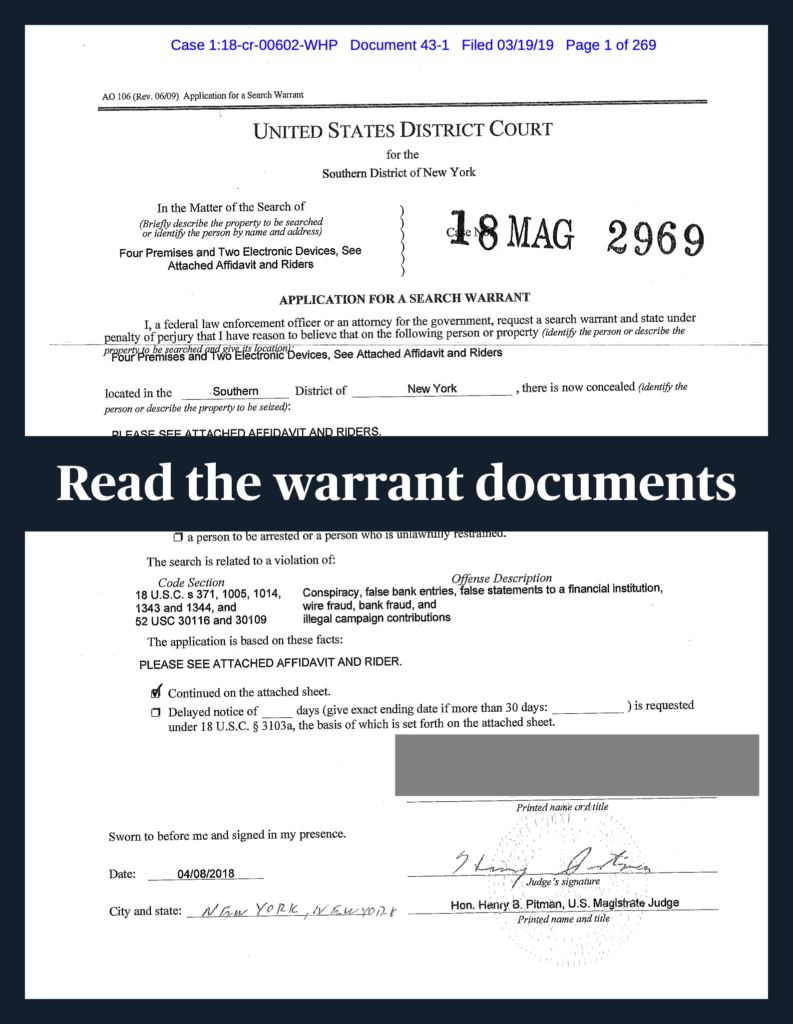