Deputy Attorney General Rod Rosenstein, a Trump administration appointee who oversaw special counsel Robert Mueller’s Russia probe at the Justice Department, will step down from his role May 11, according to a resignation letter he submitted Monday.

Rosenstein’s resignation has been expected since Attorney General William Barr was confirmed earlier this year. He delayed his resignation until Barr released a redacted version of Mueller’s report to Congress and the American public.

Rosenstein was a pivotal figure in the events that led to the investigation, which has been a consistent source of tension between the Department of Justice and the president. And after former Attorney General Jeff Sessions recused himself from the investigation, Rosenstein was responsible for appointing Mueller as the special counsel, initiating the nearly two-year probe. Rosenstein oversaw the probe until Barr took office earlier this year.

In his letter, Rosenstein thanked the president “for the opportunity to serve; for the courtesy and humor you often display” and his national goals like patriotism and prosperity.

“We enforce the law without fear or favor because credible evidence is not partisan, and truth is not determined by opinion polls,” he wrote.

Click on the image below to read the full letter. 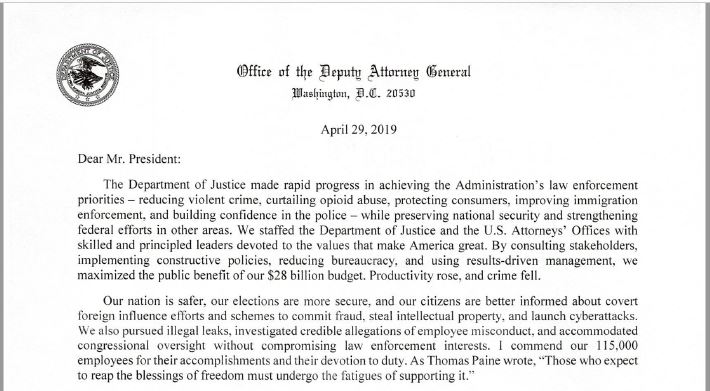 The giant timeline of everything Russia, Trump and the investigations