Republicans had made taking back the once reliably conservative seat a priority in 2020. Tuberville, who has never held public office and last coached four years ago, aligned himself closely with President Donald Trump and declared in the primary campaign: “God sent us Donald Trump.”

“Alabama, welcome back to the Republican U.S. Senate,” Tuberville shouted after taking the stage to loud cheers at his election night party in downtown Montgomery. He said his victory shows that the seat can’t be bought by donors from other states. 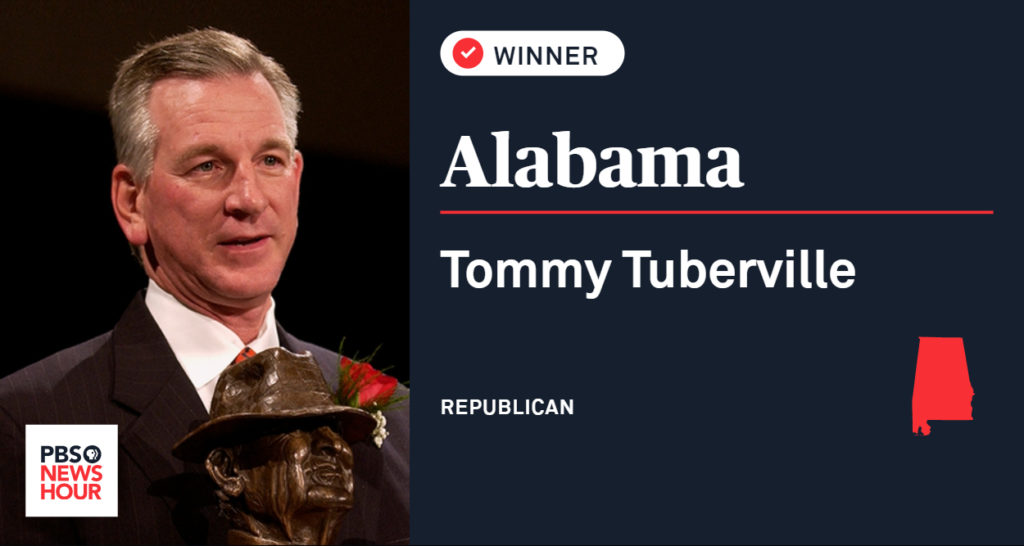 Tuberville took a congratulatory call from Vice President Mike Pence on stage after his victory was declared. “Thank you for delivering a great victory for President Donald Trump and thank you for sending a great new senator to the United States Senate,” Pence told the crowd after Tuberville put him on speakerphone.

Jones had won the seat during a 2017 special election in which GOP Senate candidate Roy Moore was publicly accused of sexual misconduct involving young women decades ago.

The GOP hammered Jones over his vote to convict Trump in the Senate impeachment trial earlier this year.

Judy Harrison, a retired educator in Montgomery who described herself as “very conservative,” said she voted for Tuberville.

“He’s a fine Christian man, I do know that,” said Harrison, 80. “And I know that he will work hard and do the best that he can. And I think his values are similar to mine.”

However, Glenn Crowell, a 63-year-old retired restaurateur and Republican, voted for Jones.

“I would have voted for Tuberville, but I couldn’t find out some stuff about him because he didn’t give any interviews and didn’t debate or anything like that,” said Crowell, who is Black.

Three years ago, Jones became the first Alabama Democrat elected to the U.S. Senate in a quarter-century. His victory, blasted as a fluke by some, was aided by scandal after Republican nominee Roy Moore, already a controversial figure in the state, faced allegations of sexual misconduct from decades earlier.

Jones won the special election to fill the seat that belonged to former U.S. Sen. Jeff Sessions. He resigned to become Trump’s first attorney general, a position he was later forced to resign after Trump became unhappy from Sessions’ decision to recuse himself from the Russia investigation.

Tuberville, armed with outsider appeal and fame from his time as Auburn University’s football coach, won the GOP primary over Sessions, who tried to win back his old seat but was wounded by his falling out with Trump. Trump won Alabama with 62% of the vote in 2016 and endorsed Tuberville over Sessions in the 2020 Republican primary runoff.

In trying to recapture the seat for the GOP, Tuberville and Republicans pointed to some of Jones’ votes to argue his views were out of step with Alabama’s conservative voters.

Jones, a former U.S. attorney best known for prosecuting two Ku Klux Klansmen responsible for Birmingham’s infamous 1963 church bombing, positioned himself as a moderate who supported gun rights and would cross party lines when it benefited the state.

On the campaign trail, he referred to Tuberville as “Coach Clueless” because of his verbal fumbles on policy questions and past financial dealings.

What Trump and Biden are telling supporters as campaigns wind down