Attorney General William Barr’s congressional testimony Wednesday delivered on expectations of a high-stakes clash with Senate Democrats, providing the sharpest public debate yet over his role in overseeing the conclusion of Robert Mueller’s investigation into Russian interference in the 2016 election.

Sen. Patrick Leahy, D-Vt., accused Barr of giving false testimony to Congress earlier this month about his knowledge of Mueller’s concerns with the attorney general’s four-page summary of the report. Other Democrats accused Barr of evading their questions about his rollout of the report, demanded that Mueller testify before Congress to give his version of events, and called on the attorney general to recuse himself from overseeing ongoing federal investigations into President Donald Trump’s business and political activities.

And Sen. Mazie Hirono, D-Hawaii, flatly called on Barr to resign as attorney general, arguing that he was protecting Trump instead of acting as the nation’s top law enforcement official.

Throughout the tense, roughly five-hour hearing, Barr defended his handling of the report, including his decision on two occasions in March to reject Mueller’s request that he make more of the findings public. At other times in the hearing the attorney general struggled to recall his decision-making process and conversations with the White House. Barr’s performance raised new questions about his actions, and Democrats’ concerns about his independence from Trump.

The hearing made clear that Democrats believe Barr lied to Congress earlier this month when he told lawmakers he was not aware of any concerns Mueller may have had with Barr’s summary of the special counsel’s conclusions about obstruction of justice.

Barr’s performance raised new questions about his actions, as well as Democrats’ concerns about his independence from Trump.

Barr told House and Senate Democrats in hearings on April 9 and 10 that he did not know if the special counsel had taken issue with his presentation of the conclusions from the report. In his four-page summary, released March 24, Barr wrote that Mueller had not drawn a conclusion on whether Trump obstructed the investigation, leaving the attorney general to decide if there was enough evidence that the president committed an obstruction offense. Barr concluded there was not, and Trump has used the decision to claim a complete exoneration of any obstruction of justice charges.

But Tuesday night, less than 24 hours before Barr’s appearance before the Senate, a letter surfaced from Mueller to Barr in which the special counsel expressed concerns with the attorney general’s interpretation of his conclusions. It was dated March 27, about two weeks before Barr’s April testimony. 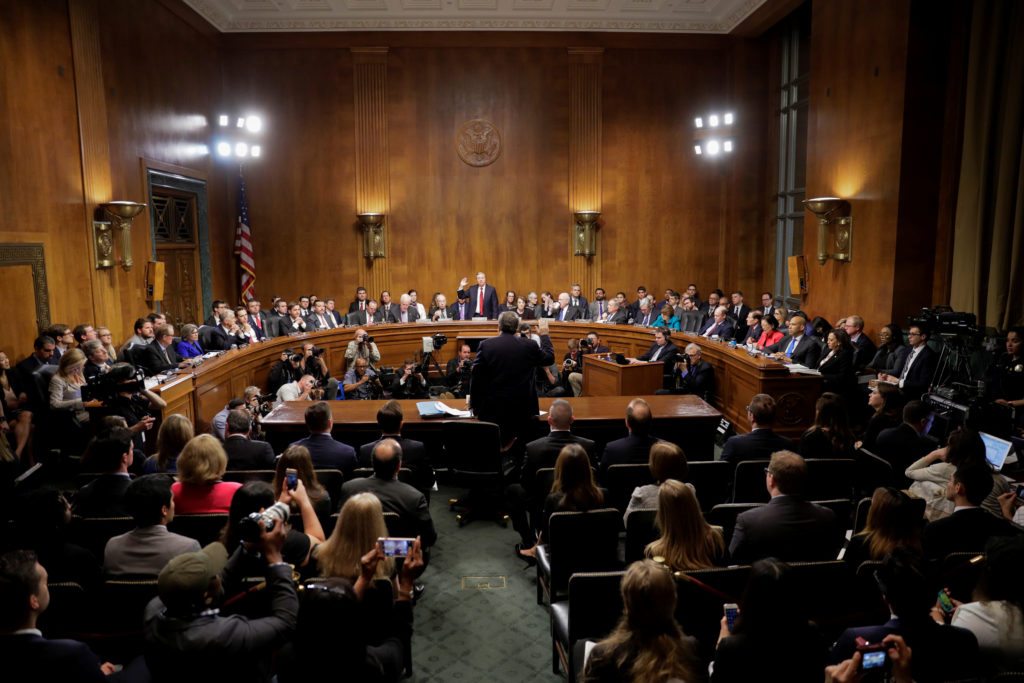 The hearing Wednesday offered the sharpest debate yet between Attorney General William Barr and Democrats over his handling of the Mueller report. Photo by REUTERS/Jim Bourg

At the hearing Wednesday, several Democrats offered Barr an opportunity to explain himself. Barr denied he lied in his previous appearances before Congress in early April. But he largely avoided giving a straight explanation, often relying on convoluted legal jargon to make the case that he had never shifted positions. Democrats did not buy the performance.

Barr didn’t help his case when he detailed a conversation he had with Mueller on March 28, the day after he had received a formal complaint from the special counsel. In that conversation, according to Barr, Mueller urged him for a second time to release a more detailed summary of his findings. Barr said he turned the special counsel down because he wanted to release the entire report at one time, instead of in “piecemeal” fashion with dribs and drabs of information.

The reasoning made sense. Nevertheless, for Democrats, it reinforced claims that Barr rushed to issue a judgement exonerating Trump and then tried to hide Mueller’s concerns from the public.

At least one Senate Democrat wants Barr to resign. More may follow.

It was no secret heading into Wednesday’s hearing that Democrats were unhappy with Barr’s handling of the Mueller report. Still, many Democratic lawmakers, especially in the Senate, had stopped short of calling for him to resign, or to recuse himself from any current or future federal investigations involving the president.

That changed Wednesday, when Hirono leveled the most withering criticism of Barr from any Democrat on the committee.

“You used every advantage of your office to create the impression that the president was cleared of misconduct,” Hirono said. She went on to accuse Barr of acting as Trump’s lawyer, and covering up for the president, before concluding: “Being attorney general of the United States is a sacred trust. You have betrayed that trust. America deserves better. You should resign.”

Barr did not respond, leaving it to Sen. Lindsey Graham, R-S.C., the committee chairman, to offer a defense. Graham immediately did so, saying that Hirono “slandered this man from top to bottom.”

Hirono was the only Democrat who explicitly called for Barr to step down. Others, among them several 2020 presidential candidates, did not chime in. But in Washington it often only takes one lawmaker to go out on a limb for others to feel they have enough political cover to follow suit. 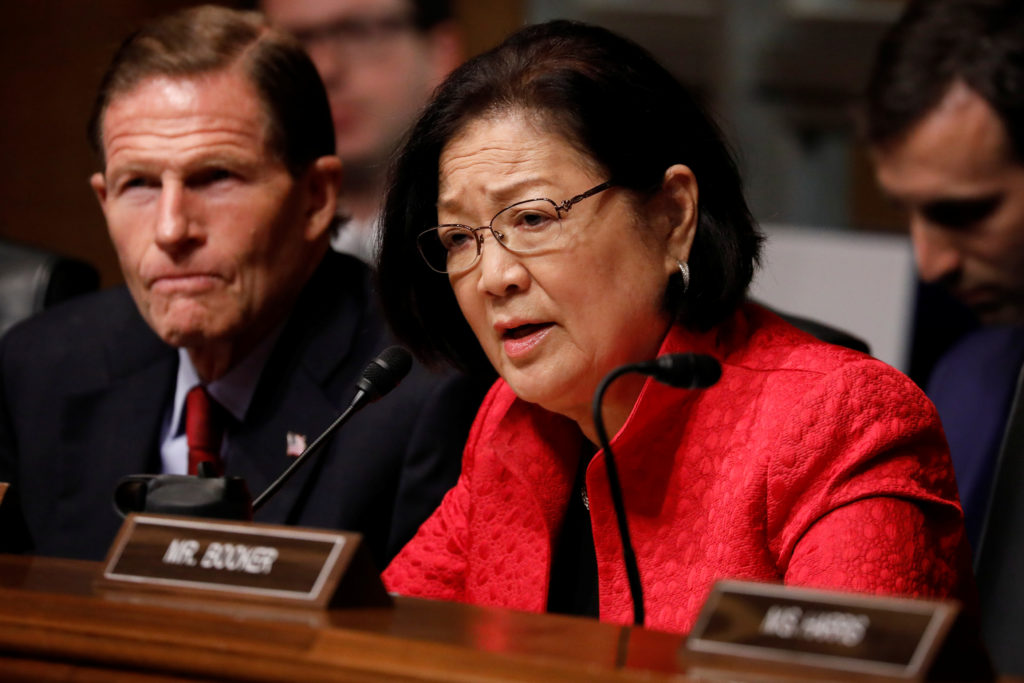 Sen. Mazie Hirono, D-Hawaii, was the only Democrat at Wednesday’s hearing to call on Attorney General William Barr to resign. Photo by REUTERS/Aaron P. Bernstein

As the fallout from Mueller’s report continues, other Democrats may join Hirono in calling for Barr to resign. But the chances of him stepping down are slim to none. Trump has praised Barr’s oversight of the Mueller investigation and his conclusions about the special counsel report. And other Republicans, including the Republican members of the Judiciary Committee, have showed no signs of abandoning their support for the attorney general.

Before the hearing, Barr was also holding onto public support. Thirty-eight percent of Americans approved of Barr’s performance as attorney general, according to a PBS NewsHour, NPR and Marist poll released Wednesday. But more people — 44 percent — said they believed the attorney general was serving in the best interest of Trump, rather than in the best interest of the American public.

Republicans tried to steer away from Mueller’s findings on obstruction

At the hearing Wednesday, Republicans focused on the FBI’s investigation into Hillary Clinton’s use of a private email server as secretary of state. They focused on the bureau’s handling of its counterintelligence probe of Trump’s campaign. And they criticized the Obama administration for not doing more to stop Russia from meddling in the 2016 election.

But most Republicans, with the exception of Sen. Ben Sasse of Nebraska, did not dwell on Mueller’s conclusion in his report that the Russian government engaged in a “systematic and sweeping” effort to disrupt the election, and that Trump’s campaign expected to benefit from the interference.

The partisan response to the Mueller report isn’t surprising. But it does reveal the challenges Democrats face in building a case against Trump.

Likewise, Republicans did not signal any discomfort with the 10 instances Mueller identified in his report in which Trump attempted to interfere in the investigation. The obstruction section of the report painted a damaging picture of a president who made misleading statements to the public, ordered his top aides to lie, and pressured key witnesses not to cooperate with the investigation. Republicans had virtually nothing to say Wednesday about Trump’s actions, and avoided asking Barr substantive questions about the obstruction findings in Mueller’s report.

The partisan response to the Mueller report isn’t surprising. But it does reveal the challenges Democrats face in building a case against Trump. The Senate GOP’s support for Trump is a principal reason why House Speaker Nancy Pelosi has so far resisted calls from some in her party to launch impeachment proceedings. Without enough votes in the Senate, impeachment would be dead on arrival if it cleared the House. Pelosi knows this, and Wednesday’s hearing did nothing to change that calculus.

Republicans want to move on from the Mueller report. That’s not going to happen.

Graham echoed other Republicans in saying Wednesday that it was time to move on from the special counsel investigation. “For me, it is over,” Graham said. Barr tried to give the hearing an air of finality as well. He said he fulfilled his vow, in his confirmation hearing, to allow Mueller to conclude his investigation, and to make as much of the report public as possible.

Mueller’s “work concluded when he sent the report to the attorney general. At that point, it was my baby,” Barr said, adding that he made every effort to be as transparent as possible about his final determination of the evidence in the report.

“The report is now in the hands of the American people. Everyone can decide for themselves. There’s an election in 18 months, that’s [a] very democratic process. But we’re out of it. And we have to stop using the criminal justice process as a political weapon,” Barr added later.

But as much as Barr and Republicans may want to move on, the special counsel investigation is not going anywhere. If anything, Wednesday’s hearing gave Democrats new avenues to pursue. These include whether or not Barr spoke with the White House about ongoing federal investigations into Trump, and his March 28 phone conversation with Mueller.

Barr is also in a fight with House Democrats, who are considering holding him in contempt of Congress for refusing their demand that he answer questions from a staff attorney at a public hearing. Barr said Wednesday evening he would not appear before a scheduled House committee hearing Thursday.

Senate Democrats have also asked for the Department of Justice’s inspector general to look into Barr’s handling of the special counsel investigation, and whether he should recuse himself from overseeing the other investigations of the president. Barr refused to do so on Wednesday. It was another indication that the battle, at this point, has no end in sight.