Most Democratic voters haven’t picked their 2020 candidate for president

Days before the final Democratic presidential debate of 2019, a majority of Democratic voters has not decided who they want to see as their party’s 2020 nominee, and no one candidate has wooed enough voters to meaningfully distinguish themselves as the frontrunner, according to the latest PBS NewsHour/NPR/Marist poll.

More than three-quarters of Democrats and Democratic-leaning independent voters — 76 percent — said they have not made up their minds about which candidate they will pick. Less than a year away from election day, the poll numbers suggest that people are slowly homing in on their candidate of choice. In June, 84 percent of these voters had not yet decided for whom they would cast their ballot.

Seventy-six percent of Democrats and Democratic-leaning independent voters said they have not made up their minds about which candidate they will pick.

The debate will come a day after the House of Representatives plans to hold a floor vote on whether or not to impeach President Donald Trump, and Americans remain split over what should ultimately happen. Forty-four percent of U.S. adults say Trump should be impeached and removed, but another 47 percent of Americans say they oppose or are unsure if Trump should be impeached and ousted from office. 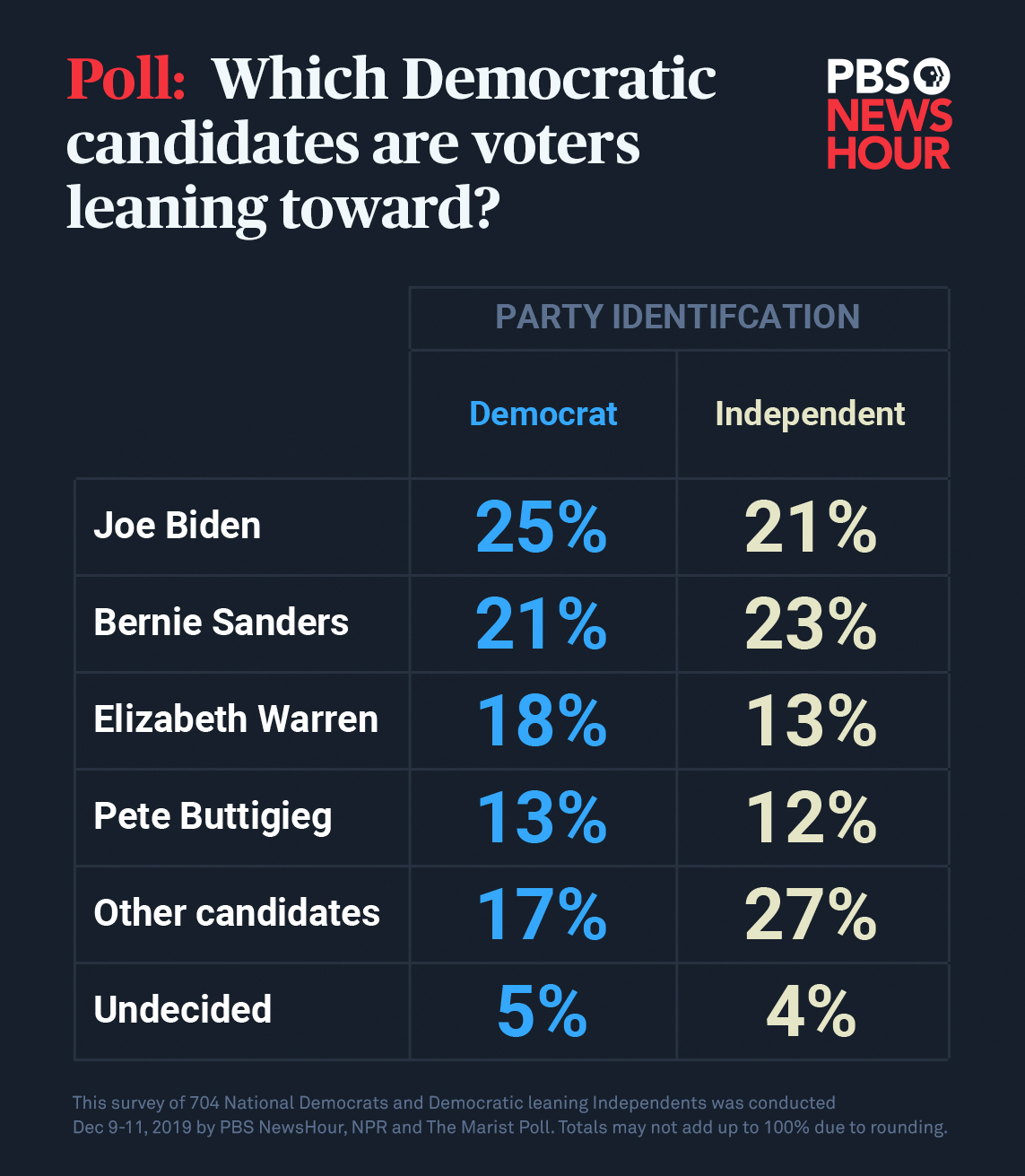 Since November, when public hearings began as part of the House impeachment inquiry, support for impeaching Trump has remained statistically frozen, and through it all, Trump’s job approval rating sits virtually unchanged– at 42 percent of Americans.

How Democratic voters are leaning

While most left-leaning voters in the U.S. do not know yet which candidate they want to lead the country, two-thirds of Democrats and Democratic-leaning independents said they are satisfied with the variety of candidates still in the running for the party’s presidential nomination.

When asked which Democratic candidate they most preferred, 24 percent of left-leaning voters, including those who remain undecided, picked Biden, followed closely by 22 percent in support of Sanders. Another 17 percent backed Warren, and 13 percent said they were behind Buttigieg. Respondents offered other candidates 5 percent of support or less.

While waves of support have emerged among Democratic voters, no candidate has harnessed that energy and converted it into real momentum yet, said Lee Miringoff, who directs the Marist Institute for Public Opinion.

“Clearly, there’s not a lot of persuasion going on” between the public and the presidential candidates.

“Clearly, there’s not a lot of persuasion going on” between the public and the presidential candidates, he said.

Democratic voters may also be waiting to see which candidate gains traction amid the divisive impeachment process. About half of left-leaning voters — 54 percent — said it is most important for their candidate to beat Trump, compared to 44 percent who said they need a Democrat who best represents their values. 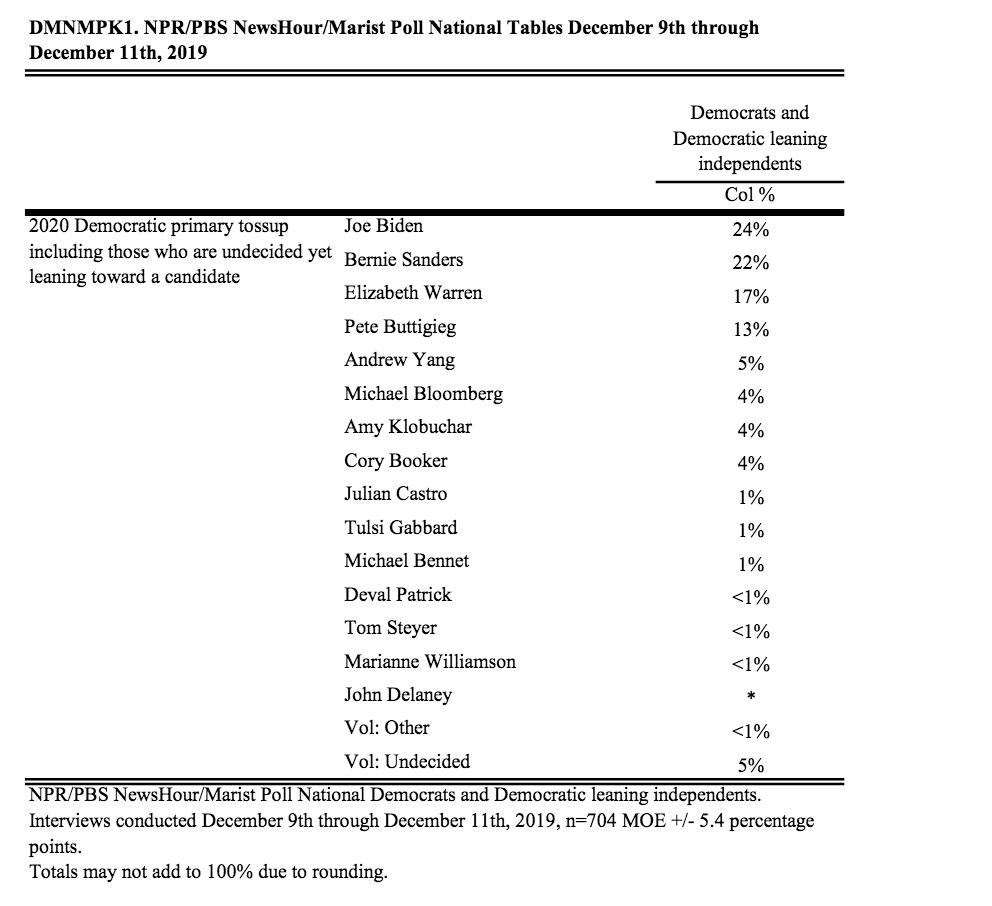 Americans overall are split across political lines about whether the candidates vying to be the next president would move the country in the right direction. When asked, 45 percent of U.S. adults said they thought the current field of Democratic presidential candidates would move the country in the wrong direction, while 51 percent said they felt that Trump would do the same.

How does Trump’s impeachment influence the Democratic race?

Senate Republicans, led by Majority Leader Mitch McConnell, R-Ky., have signaled they are “not even going to have a trial in the Senate effectively,” said Republican strategist Rick Wilson. But he cautioned that “if more comes out” detailing the specifics behind the impeachment allegations, the percent of Americans who support Trump’s impeachment and removal from office “will go up.”

History offers a cautionary tale for Republicans, says presidential historian Jeffrey Engel. Impeachment is rare in American politics, and having an impeached candidate gain their party’s presidential nomination is even rarer (President Andrew Johnson was not a politically viable candidate after his impeachment), Engel said, adding that in the end, no one can know for sure what will come of the impeachment proceedings.

But Republican leaders’ strategy is different today during Trump’s impeachment proceedings than how the party acted under President Richard Nixon, Engel said. In 1974, he said, Senate Republicans carefully considered evidence for and against the president. When the Supreme Court released the “smoking gun” tapes that revealed Nixon’s knowledge of the break-in of the Democratic National Committee’s headquarters at the Watergate, Engel said Nixon’s support among Senate Republicans and the public at large evaporated in less than a week.

“Neither side should be confident of victory at this point.”

House Republicans have argued that testimony and evidence presented during the impeachment hearings does not show that Trump tried to leverage military aid to coerce Ukraine into announcing an investigation that would benefit Trump politically and hurt Biden, a key 2020 presidential rival.

The GOP’s approach to the impeachment hearings is a dangerous gamble that could potentially crater the party’s legacy, Engel said. The GOP is “likely to live or die literally based upon whether Trump gets reelected or not,” raising the stakes even higher for the 2020 race, he said.

It is too soon to know who has an edge to win the presidency, this far out from November, said political historian Allan Lichtman, who made a name for himself by accurately calling such results ahead of time. Since 1984, Lichtman has used a system of 13 “keys,” or true/false statements about politics, performance and personality that he dubbed the “Keys to the White House.” Over the course of eight presidential elections, he has successfully predicted every race, including 2016.

“Neither side should be confident of victory at this point,” said Lichtman, a professor at American University. Things can change overnight, especially in the age of Trump, Lichtman explained. Based on his “key” system, Lichtman explains that this week’s impeachment vote turns the “scandal key.” Given the vote’s seriousness, it could unlock potential social unrest and economic decline, or even usher a third-party candidate into the race.

What issues matter most to voters?

When Americans looked at all the issues they face, 27 percent of U.S. adults said they considered the economy to be most important to them, especially among Republicans. That was followed by health care, a top concern for 23 percent of Americans, and climate change. Independents were about as concerned with climate change (14 percent) as they were with education (13 percent).

Another 10 percent said immigration was their biggest issue, while 9 percent of U.S. voters said gun policy was the most important.

When asked specific policy questions that have come up frequently during the 2020 presidential race, a majority of U.S. adults across political affiliations said background checks for gun purchases and stricter government regulations to prescription drug prices are good ideas.

Impeachment is “not affecting a lot of people’s day-to-day life. This is a Washington story.”

A partisan divide surfaced on support for Green New Deal policies designed to combat the effects of climate change through green jobs and energy efficient infrastructures, with 91 percent of Democrats and 61 percent of independents in support, versus just 28 percent of Republicans. Legalizing marijuana nationwide showed a similar pattern (76 percent of Democrats, 62 percent of independents, and 38 percent of Republicans). A handful of policies, such as Universal Basic Income of $1,000 — the centerpiece of Yang’s platform — or placing an age limit on U.S. presidents, found little support among Americans polled, no matter where they stood on the political spectrum.

Among Democrats, where a candidate stands on issues matters less than that contender’s potential to unseat Trump on Election Day. But don’t expect Democratic candidates to be talking much about Trump’s impeachment proceedings and the House’s historic vote on the campaign trail, Democratic strategist Jennifer Holdsworth said in November.

Impeachment is a “wild process,” she said, but “it’s not affecting a lot of people’s day-to-day life. This is a Washington story.”

Left: More than three-quarters of Democrats and Democratic-leaning independent voters -- 76 percent -- said they have not made up their minds about which candidate they will pick. Photo by Ryan M. Kelly/REUTERS