Split power is the new normal in American politics

The new normal: Out with the Democrats and in with the Republicans. For the first time in his six years in the White House, President Barack Obama will not enjoy a majority in either house of Congress. The Republican Party, after walloping Democrats back in November’s midterm elections, will hold 54 seats in the Senate and 246 in the House of Representatives. The GOP hasn’t held that many seats in Congress since 1929, the first year of Herbert Hoover’s presidency.

President Obama is not alone. Every president in the last 50 years, save Jimmy Carter and Lyndon Johnson, has experienced at least one session of Congress in which the opposing party controlled both chambers of Congress. In total, 16 presidents have been in this position. 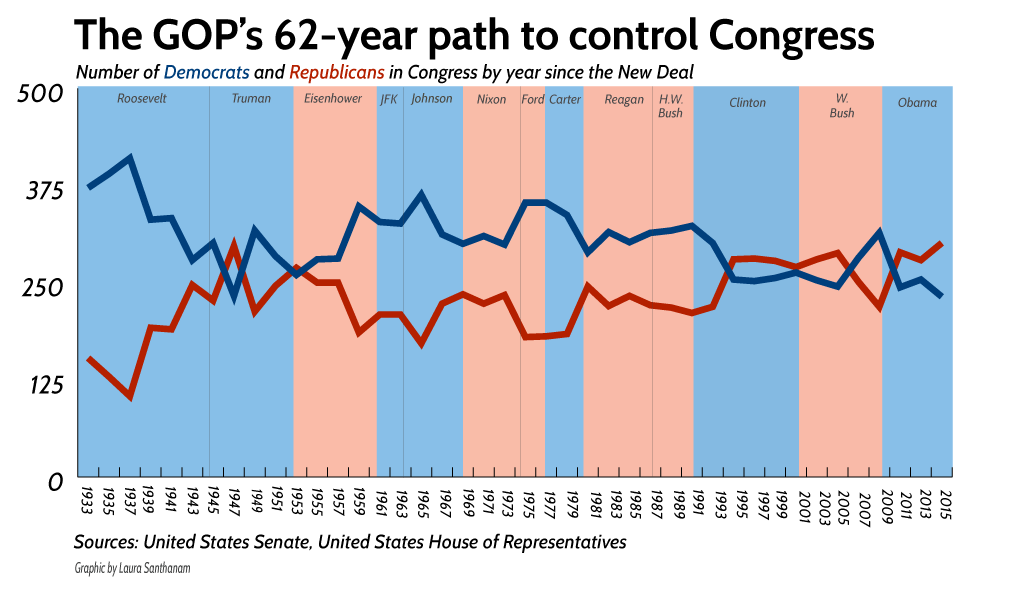 In U.S. history, the president’s party has been in the minority in both houses during only 24 of the 114 sessions of Congress. But 16 of those sessions came in the last 70 years, after the death of President Franklin Roosevelt. In other words, it is now par for the course for a modern-day president to have to compromise with the other party to get much of anything done in Washington.

The change is significant. At the beginning of FDR’s second term, Democrats held 410 seats, meaning more than 75 percent of Congress. That was the high point for the Democratic Party, but over the next 70 years, there was a steady decline in the size of majorities for both parties. On average, over the past 20 years, the party in charge of a chamber in Congress has only controlled around 50 to 55 percent of the seats in Congress, making the likelihood of legislation passing slimmer and slimmer.

Some presidents have have handled this power split better than others. President Bill Clinton took office in 1993, when both the Senate and the House of Representatives were controlled by Democrats. But he quickly had to readjust his strategy two years later when the GOP took control of both chambers in what is known as the Republican Revolution. Clinton worked with the Republican Congress over the next six years and, according to the Pew Research Center, was able to sign more “substantive” pieces of legislation into law than Obama achieved during his first six years. Of course, with huge majorities in his first two years, Obama passed healthcare reform, something Clinton was never able to do. 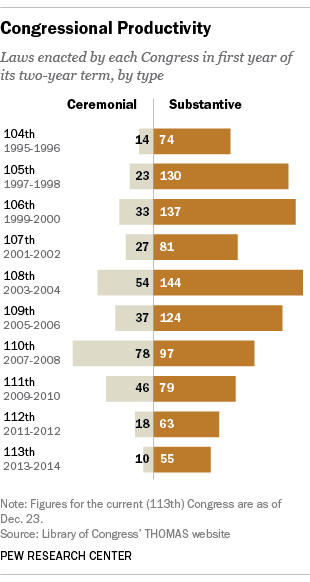 But even those presidents like George W. Bush and Obama, whose party controlled at least one chamber of Congress for their first six years, struggled to play well with Capitol Hill and cut deals. LBJ is held up as a great legislative president, but he was also fortunate to have his party in control of both the Senate and House throughout his entire presidency, and by wide margins. The bottom line is that absent huge majorities, compromise is necessary to overcome gridlock.

McConnell — Bipartisanship is up to Obama: By the way, newly minted Majority Leader Mitch McConnell, R-Ky., agrees. But in an op-ed Wednesday, he puts the ball in President Obama’s court, saying he’s the one who needs to compromise. “[B]oth parties need to make divided government work. This is where President Obama really comes in. His recent actions, including threatening to veto a bipartisan jobs project like the Keystone XL pipeline within minutes of the new Congress being sworn in, have been anything but productive. The President himself has noted that the American people are counting on him to work with the Congress they elected to get things accomplished. … [B]ipartisan progress can only be achieved if President Obama is interested in it. … The president’s supporters are pressing for militancy, not compromise. But they need to understand that democracy isn’t about what you can get away with, it’s about what you can achieve together.”

Daily Presidential Trivia: On this day in 1800, future President Millard Fillmore was born. Fillmore is one of the few presidents who was never elected to the office. Who were the others? Be the first to tweet us the correct answer using #PoliticsTrivia and you’ll get a Morning Line shout-out. Congratulations to KG (@SoIrrelevant) for guessing Monday’s trivia: Teddy Roosevelt was the first president to be awarded the Nobel Peace Prize for brokering a peace deal between Japan and Russia. Which presidents have also earned this prize? The answer: 3- Barack Obama, Jimmy Carter, Woodrow Wilson.

A test for John Boehner http://t.co/mIq4iwJGSa… but first, let him get into his office w/o slipping cc @lbentzterp pic.twitter.com/rtp8wxJK5p

Boehner begins his 3rd term, naturally, by crying and being extremely tan.

Shaheen brought the family dog for her swearing in pic.twitter.com/HYBENJkTCb

Seventy years ago this very day, Barbara Pierce of Rye, NY made me the happiest, and luckiest, man on earth. pic.twitter.com/rgZqpL9XfE

Left: Sen. Cory Gardner (R-CO) watches as Vice President Joe Biden talks to Gardner’s grandmother, Betty Pagel of Yuma, Colorado, on the phone after his ceremonial swearing in at the U.S. Capitol January 6, 2015 in Washington, DC. The 114th Congress convened Tuesday, restoring control of both the House and Senate to the Republicans for the first time in eight years. Photo by Chip Somodevilla/Getty Images