Support for gun rights has eroded after nearly a decade of mass shootings, poll shows

Six out of 10 Americans think it is more important to control gun violence than protect gun rights, a significant rise over the last decade evident in the latest PBS NewsHour/NPR/Marist poll, as mass shootings continue to erupt across the U.S. And as midterm elections approach, seven of 10 people say they’re more likely to vote in November after last month’s mass shootings at a school in Uvalde, Texas, and a grocery store in Buffalo, New York.

Nearly a decade ago, four months after the shooting at Sandy Hook Elementary School in Newtown, Connecticut, 49 percent of Americans said they prioritized controlling gun violence. In the latest poll, conducted in the wake of the school shooting in Uvalde, Texas, that number rose to 59 percent, including 92 percent of Democrats and 54 percent of independents. Support for prioritizing gun rights dropped to 35 percent, but remained high among Republicans — 70 percent — and 56 percent of gun owners.

“Without question, we’re seeing more focused attention on the possibility that we can actually do something about firearm violence than we’ve seen in a long time,” said Dr. Garen Wintemute, who directs a violence prevention research program at the University of California, Davis. 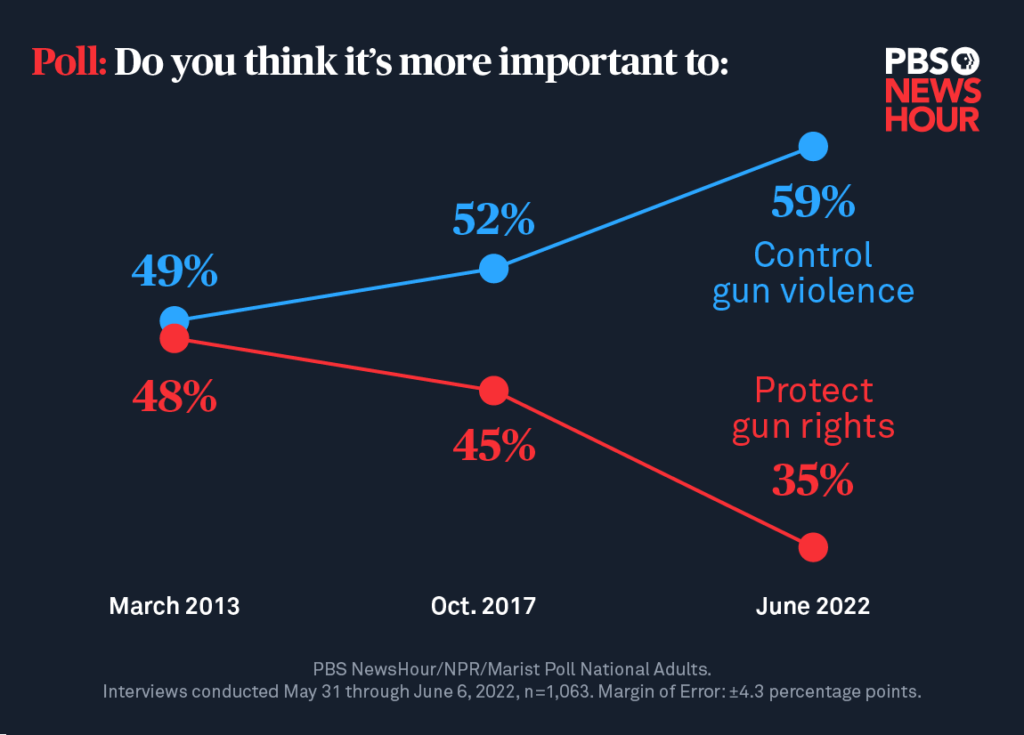 Those political divisions may be eroding under the cruel repetition of gun violence in this country. During the coronavirus pandemic, firearm deaths — which include homicides, suicides, and accidental deaths — have surged to historic levels. According to federal data that the Centers for Disease Control and Prevention released in May, firearm deaths rose 35 percent from 2019 to 2020, and firearms contributed to roughly eight out of 10 homicides nationwide. So far this year, there have been more than 250 mass shootings, defined as incidents in which four or more people are injured or killed, according to the Gun Violence Archive — on average, more than one per day. Over the two decades since the 1999 Columbine school massacre, this uniquely American tragedy has created its own political theater. Initial shock and grief give way to angry calls for action on guns, mental health support or securing public spaces that typically fizzle out in Congress, if they manage to reach those hallowed halls.

This happened after the 2012 mass shooting at Sandy Hook Elementary School in Newtown, Connecticut, where a lone gunman killed 20 children and six teachers and staff. Congress initially rallied behind proposals on strengthening background checks, but ultimately did nothing.

After each of the many high-profile shootings that have transpired since, efforts to get legislation through Congress have failed. But solutions exist, said Cassandra Crifasi, who directs research and policy at the Center for Gun Violence Solutions at Johns Hopkins University. States including California and Florida have taken action to restrict guns to boost public safety, passing hundreds of laws in the last decade. That includes so-called “red flag laws” that allow law enforcement or family members to ask a judge to temporarily remove guns from a person who may pose a danger to themselves or others. Nineteen states, along with the District of Columbia, have versions of this law in place.

In this latest poll, roughly three quarters of voters would throw their support behind a candidate for Congress who would work to enact red flag laws. That includes six out of 10 Republicans and gun owners, as well as about half of all Trump’s 2020 voters, nearly all Democrats and most independents. Research shows this measure makes a difference, Crifasi said.

Nearly all registered voters – 86 percent – said they would back a congressional candidate who supports more funding for mental health screenings and treatment. That support remained regardless of politics, age, race, income, education, geography or gun ownership. 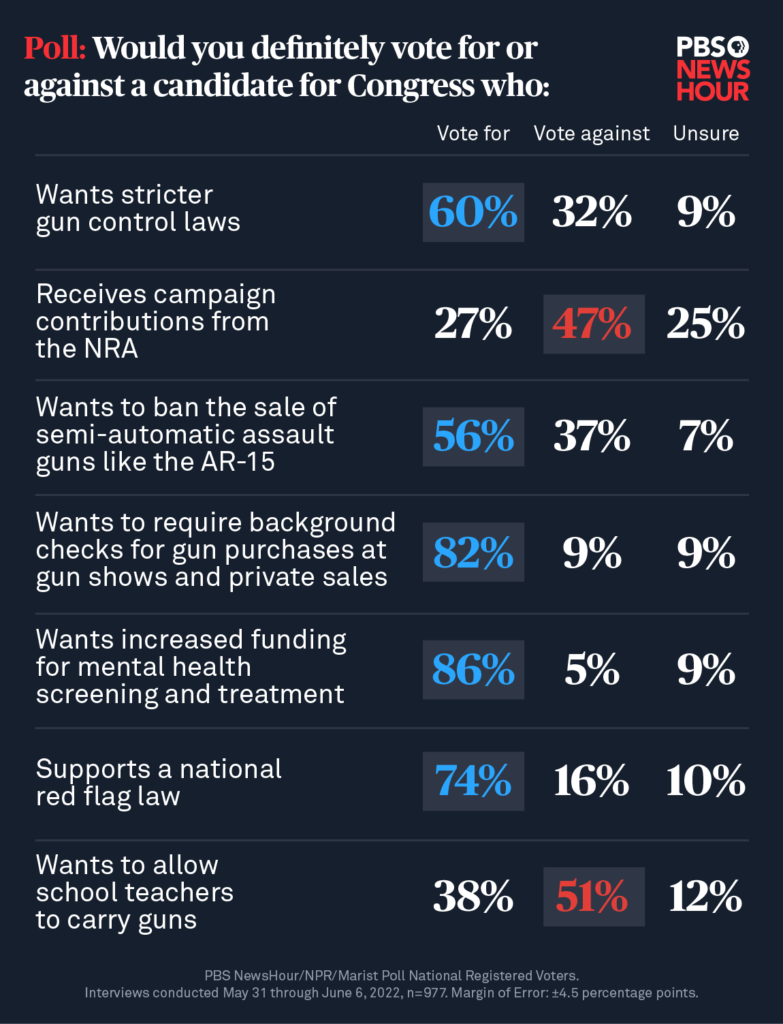 Fifty-six percent of registered voters said they want to ban the sale of semi-automatic assault guns, including the AR-15, which was the style of weapon used in both Uvalde and Buffalo. While nearly all Democrats supported such a move, independents were split while a third of Republicans backed the measure.

After the May 24 mass shooting at Robb Elementary School in Uvalde, Texas, more than 250 gun enthusiasts, including some GOP donors, signed an open letter urging elected officials in Congress to pass red flag laws and enhanced background checks for gun purchases, the Texas Tribune reported. In this latest poll, 81 percent of U.S. registered voters, including nearly all Democrats and about three-quarters of Republicans, independents and gun owners, said they would vote for a candidate for Congress who wants to require background checks for gun purchases at gun shows or other private sales.

With five months to go before this year’s midterm elections, voters say they are more likely to cast a ballot following last month’s mass shootings.

Overall, roughly seven out of 10 Americans said the mass shootings in Uvalde, Texas, and Buffalo, New York, made them more likely to vote. Some of the greatest enthusiasm appeared among Gen Z and millennial voters, non-white voters, white men who graduated from college, residents of small cities and Democrats. Another two out of 10 said those shootings made no difference in how likely they might be to vote. White men who didn’t graduate from college and people in rural communities were more likely to say the shootings would not influence their voting behavior. 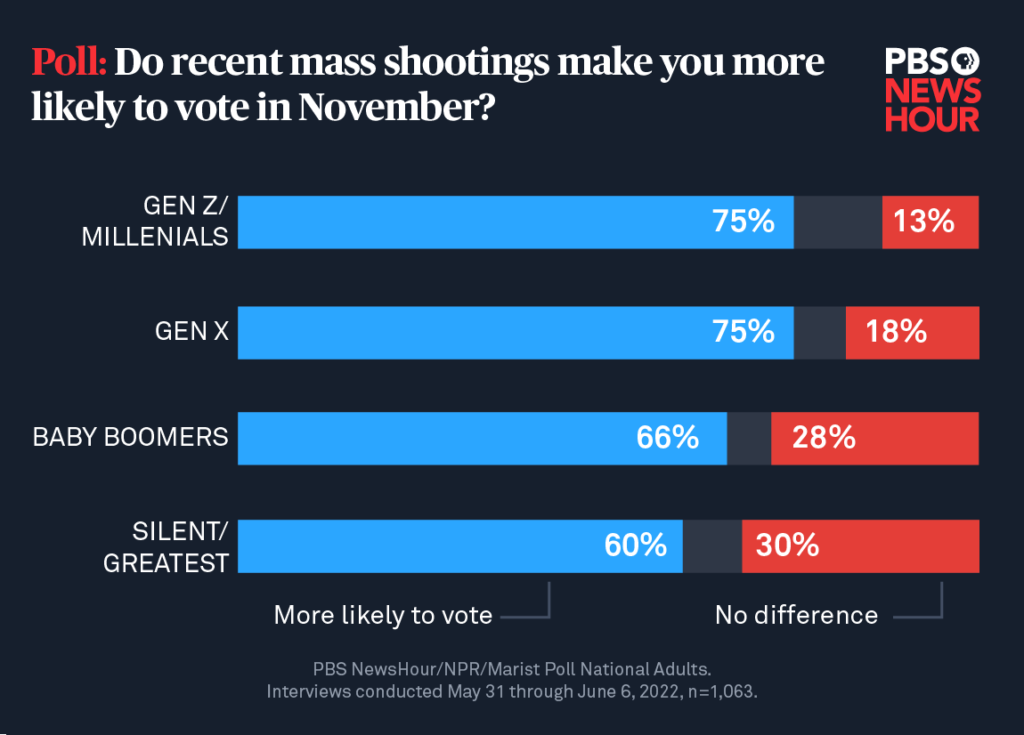 Nearly two-thirds of Gen Z and millennial voters, many of whom have participated in active shooter drills in their classrooms or gone to school under the threat of mass shootings for all or most of their educational careers, say they want to control gun violence. The youth movement that emerged after Parkland, particularly March for Our Lives and Students Demand Action, as well as growing research and political interest in reducing mass shootings, suicides, homicides and domestic violence, have culminated in a new type of single-issue voter engaged on controlling gun violence, Crifasi said.

Lawmakers appear to be listening, engaging in multiple sets of bipartisan talks since the Uvalde shooting to craft legislation that will draw enough support from both sides of the aisle. The House on Wednesday passed the “Protecting Our Kids Act” on a mostly partly line vote of 223-204, a sweeping series of reforms that includes, raising the age to buy semi-automatic weapons (some research suggests that states that required someone to be 21 or older to buy a gun saw a 8-percent decline in suicides among young people) and banning high-capacity magazines, among other measures. It is not expected to pass the Senate, where lawmakers are trying to develop their own more narrow gun violence package focused on enhancing background checks, mental health programs and school security by the end of the week.

Looking to the midterms, timing and urgency will play a bigger role in determining how much gun reform influences people’s votes, said Robert Blizzard, a Republican pollster with Public Opinion Strategies. The constant churn of politics and news can mean that what feels urgent now will swiftly be replaced by the next great tragedy or scandal.

“In this current political climate, five months is a lifetime,” Blizzard said. “The challenge here is that this doesn’t happen in a vacuum.”

While voters may be unified on these issues, especially after a mass shooting, they are also compelled by a lot of issues – the economy, inflation and continued concerns over COVID – when they are asked to choose which candidate to support, said Amy Walter of the Cook Political Report.

“If your choice is to vote for a candidate you agree with on guns but then disagree with on a whole host of other issues, you have to make a choice.”

“If your choice is to vote for a candidate you agree with on guns but then disagree with on a whole host of other issues, you have to make a choice,” Walter said.

People whose communities are mourning lives lost to the most recent rounds of gun violence told lawmakers this week that action – not words – are what’s needed now.

“Your thoughts and prayers are not enough,” said Zeneta Everhart, who testified Wednesday before the House Oversight Committee about her son, Zaire Goodman, who was shot during the mass shooting inside Tops Grocery store in Buffalo, New York. Goodman survived the shooting but was hospitalized. “We need you to stand with us in the days, weeks, months and years to come and be ready to go to work and help us to create the change that this country so desperately needs.”

Left: Wooden crosses are placed at a memorial dedicated to the victims of the mass shooting at Robb Elementary School on June 3, 2022, in Uvalde, Texas. Support for protecting gun rights is waning in the wake of recent mass shootings, the latest polling from PBS NewsHour/NPR/Marist suggests. Photo by Alex Wong/Getty Images.