Americans are split over whether they support an impeachment inquiry against President Donald Trump, according to the latest poll from the PBS NewsHour, NPR and Marist.

Forty-nine percent of U.S. adults said they supported the House of Representatives launching an impeachment inquiry into the president, while 46 percent of Americans said they disapproved, and 5 percent remained unsure, according to the poll. Support of the inquiry fell along party lines. Eighty-eight percent of Democrats agreed with the inquiry, along with 44 percent of independent voters, but among Republicans, support was drastically lower, at 6 percent. 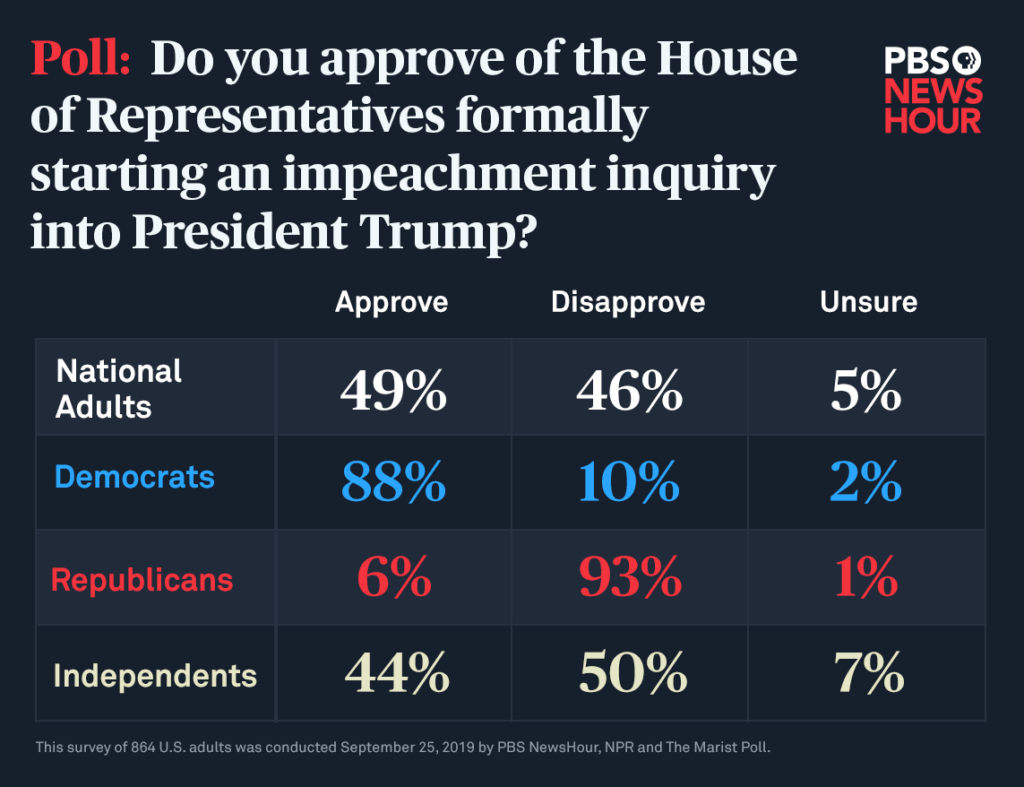 In May, 53 percent of Americans said they did not want Trump to be impeached following the release of special counsel Robert Mueller’s report about the relationship between the Trump administration and Russia leading up to the 2016 election, according to a May 1 poll from the PBS NewsHour, NPR and Marist.

This latest poll was conducted the day after Speaker Nancy Pelosi called for the House of Representatives to begin an impeachment inquiry into Trump’s behavior, following an intelligence community whistleblower complaint that Trump sought foreign assistance from Ukrainian President Volodomyr Zelensky on investigating former President Joe Biden, who is currently a frontrunner and would-be Trump opponent in the 2020 Democratic race for the presidency. The White House provided some details of that call in a memo released Wednesday.

In testimony before the House Intelligence Committee on Thursday, Acting Director of National Intelligence Joseph Maguire said the whistleblower “did the right thing” by lodging his or her complaint about the nature of Trump’s phone call with Zelensky. In the complaint, released publicly ahead of Maguire’s appearance, the whistleblower wrote that Trump was abusing his power and suggested the White House had tried to cover up details of the phone call. 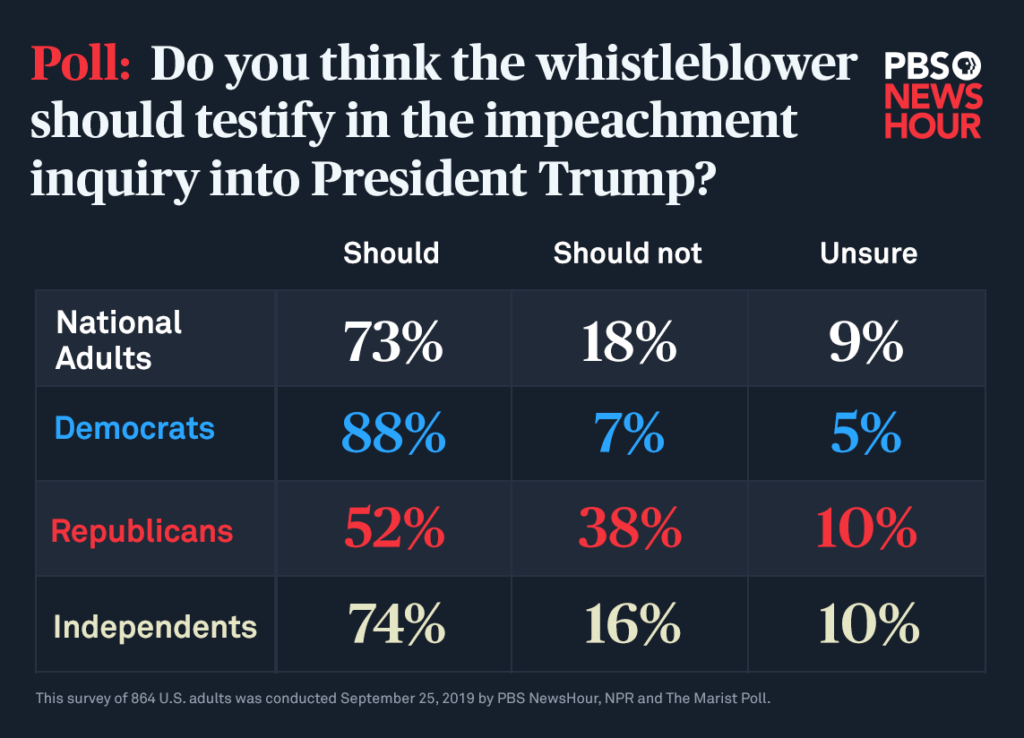 The Trump administration has denied any wrongdoing. During a press conference on the sidelines of the U.N. General Assembly on Wednesday, the president defended his call with the Ukrainian president, asking “Impeachment? For that? When you have a wonderful meeting, or you have a wonderful phone conversation?”

And more than half of Americans — 55 percent — think the call at the center of the whistleblower’s complaint — during which Trump asked Zelensky to investigate a potential political opponent — is a serious matter that deserves to be probed more thoroughly. Another 43 percent said it is just politics.

As presidential historian Jeffrey Engel watched Maguire’s televised testimony in his office at Southern Methodist University in Dallas, he said his heart raced “at the magnitude of this moment.”

When the Founding Fathers discussed what warranted immediate impeachment in July 1787, Engel said, the terms they agreed upon are “reading like a resume of Donald Trump’s actions in this case.”

If a president were to work with a foreign entity to influence an election, or to use the power of his office to cover up wrongdoing, Engel said, the nation’s early leaders would find those to be impeachable offenses. Engel, who founded and directs the Center for Presidential History, said he has studied declassified presidential phone records for 20 years. Engel found President Nixon’s case to be particularly “instructive” for what’s happening with Trump.

The Watergate break-in happened in 1972, and as news dribbled out, Americans were reluctant to support impeachment, and Republican members of Congress staunchly defended the president. Then, the Supreme Court ordered the release of audio tapes, later known as the “Smoking Gun,” which revealed that Nixon asked the FBI to drop its investigation of the break-in of the Democratic National Committee headquarters at the Watergate. When people heard those tapes, Engel said “everything changed literally overnight.”

“The evidence we have, to be perfectly honest, would be more than enough to damn any previous president.”

Support for Nixon evaporated and “he was gone within a week,” Engel said.

In the case of Trump and the events encircling his phone call with Ukraine’s president, Engel said: “The evidence we have, to be perfectly honest, would be more than enough to damn any previous president.”

When the PBS NewsHour asked Facebook followers if they supported an impeachment inquiry into Trump, user Victoria Renehan said “the layers of corruption are so great in numbers that there wouldn’t be any real truths revealed.”

She suggested many officials are “corrupted,” and that “this will be a fabricated witch hunt.”

Republican lawmakers have largely avoided weighing in on Trump’s part of the conversation with the Ukrainian leader. During Thursday’s hearing, many focused on the leak of the whistleblower complaint itself.

Striking parallels emerge if you compare this moment to previous impeachments, Engel said.

The poll suggests that most Americans are paying attention; 68 percent said they were following the impeachment proceedings “very” or “fairly” closely. Divisions among Americans may cloud perceptions of this impeachment and the validity of its findings, no matter the outcomes, Engel said. People aren’t likely to stray from what they already believe, he said.

“We’re living in a different truth environment now,” he said. “It’s possible that an entire segment of the population won’t believe” the inquiry or its findings.

“It’s possible that an entire segment of the population won’t believe” the inquiry or its findings.

Democrats have called for Trump’s impeachment since he took office, and this latest round could sound like “crying wolf,” said Alison Henry, a 52-year-old elementary school teacher, wife and mother of two who listened to live radio coverage of Maguire’s testimony Thursday from her office in Keene, New Hampshire.

While Henry doesn’t describe herself as a Trump supporter, she said the president “has been hassled around the question of impeachment” since he entered the White House. More recently, some Democrats on Capitol Hill demanded his impeachment after Trump tweeted racist remarks about four non-white members of Congress, telling them to go back where they came from. All four are American citizens.

Trump asking Zelensky to help look for incriminating information on the Biden family in exchange for military aid is “a whole new level” of behavior that must be investigated, Henry said.“Now that he’s crossed the line, I think it’s going to be easier for Trump to dismiss this as noise.”

At this point, the impeachment inquiry has no impact on the decision of a majority of U.S. registered voters as they contemplate the 2020 presidential election. When asked, 58 percent of U.S. voters said the proceedings did not factor at all in how they plan to cast their ballot, and 14 percent said the inquiry served only as a minor consideration. For a quarter of registered voters, Trump’s impeachment inquiry will be a major factor in helping them decide who to support as the next president. 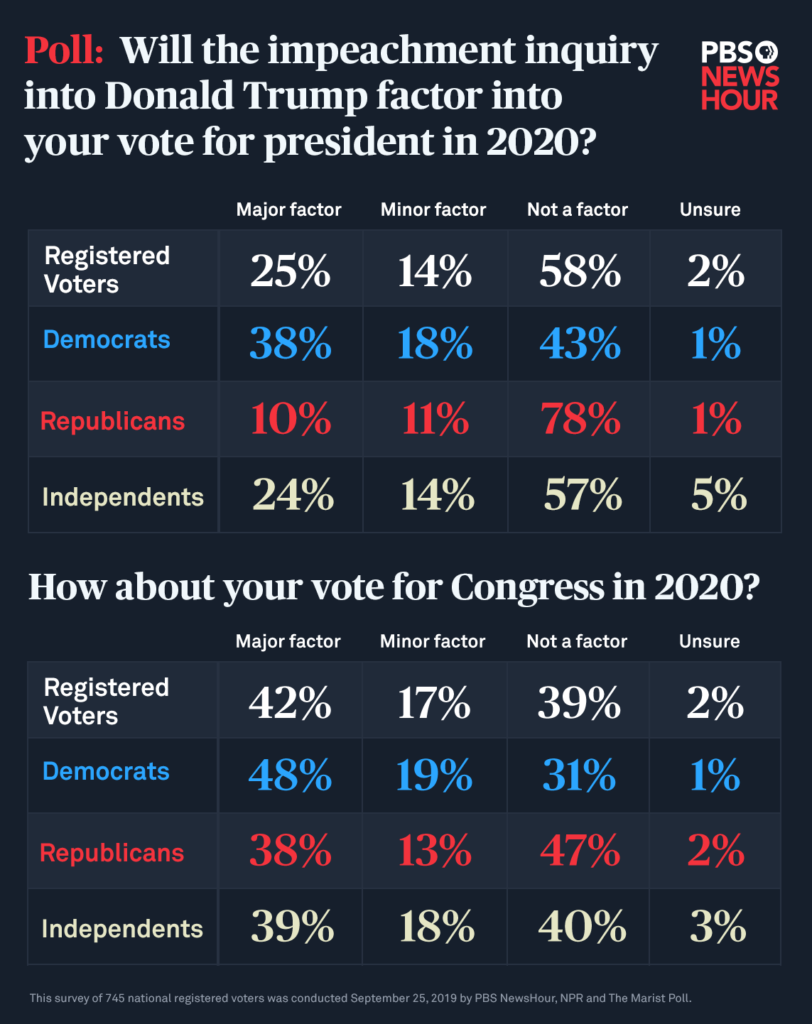 Left: President Donald Trump sits next to Ukrainian President Volodomyr Zelensky during a bilateral meeting at the United Nations General Assembly. Support for an impeachment inquiry into a July phone call between Trump and Zelensky fell along party lines, according to the latest PBS NewsHour/NPR/Marist poll.