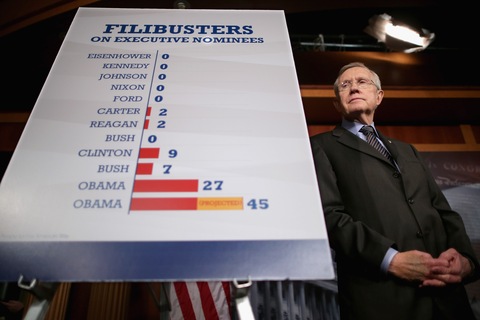 Senate Majority Leader Harry Reid talks to reporters about the use of the ‘nuclear option’ at the U.S. Capitol Thursday. Photo by Chip Somodevilla/Getty Images

No, Senate Democrats aren’t glowing green, but Thursday they voted to implement historic rule changes that could dramatically reshape the remaining years of President Barack Obama’s second term in office.

It’s easy to get bogged down in the parliamentary procedural particulars, but the short version is this: It will take just 50 Democrats and Vice President Joe Biden as the tiebreaker to confirm Mr. Obama’s judicial and top administration nominees.

The lower threshold for clearing Mr. Obama’s nominations means Rep. Mel Watt, the first sitting member of the House to be denied approval in 170 years, and three of the president’s nominees to serve on the D.C. Circuit Court, could be approved when the Senate returns from recess in early December. It also clears the way for some of the president’s more senior Cabinet members to step aside, given their replacements could face swifter confirmation. (Or, as Ezra Klein points out, the president could fire people because he knows they’d be replaced quickly.) Finally, the nominees could become more partisan in nature because mathematically Mr. Obama would no longer need to win any GOP votes. There are currently 53 Democrats, two independents who caucus with the Democrats and 45 Republicans.

Senate Majority Leader Harry Reid made the change, dubbed the “nuclear option” on Capitol Hill, so nominees no longer face a 60-vote threshold for approval. He argued Senate Republicans have dangerously delayed Mr. Obama’s picks for years, and that the unprecedented move could ease government gridlock.

The Senate GOP counters that Democrats have taken advantage of their majority and will regret it. For years, some lawmakers have worked to avoid such a change, with senators in both parties warning others that they won’t like the new rules if the majority shifts.

Three Democrats joined with all of the chamber’s Republicans to oppose the move: Sens. Carl Levin of Michigan, Mark Pryor of Arkansas and Joe Manchin of West Virginia.

The new precedent represents what’s likely to prove the most significant change in Senate rules since 1975, when the cloture threshold was reduced to 60 votes in most cases (from two-thirds of senators present and voting).

“The Senate is a living thing. And to survive, it must change. To the average American, adapting the rules to make Congress work again is just common sense. This is not about Democrats versus Republicans,” Reid said opening the Senate. “This is about making Washington work — regardless of who’s in the White House or who controls the Senate. To remain relevant and effective as an institution, the Senate must evolve to meet the challenges of a modern era.”

On the Senate floor, retiring Democrat Iowa Sen. Tom Harkin applauded Reid for “leading the Senate into the 21st Century.”

“I’ve waited 18 years for this moment. The sky will not fall, the oceans will not dry up, a plague of locusts will not cover the earth,” he said. He also wants to see broader changes. (Right now, the rule change does not apply to legislation or to Supreme Court nominees.)

But Sen. Lamar Alexander, R-Tenn., complained: “It’s another raw exercise of political power to permit the majority to do whatever it wants whenever it wants to do it.”

Politico’s Manu Raju deconstructs how Reid managed to make the change happen, given the leader for months had threatened to do so but ultimately backed down.

Both parties spent the day reminding the others of what they have said previously on the topic. Senate Minority Leader Mitch McConnell once liked the idea, and then-Senator Barack Obama hated it.

“Anything less than 100 percent is obstructionism to them,” the Kentucky Republican said on the floor.

McConnell also penned an op-ed in Friday’s USA Today reminding Democrats that they once opposed the idea. It concludes:

This “naked power grab,” as Biden put it, is dangerous for our democracy. Rather than learn from past precedents, Democrats have set yet another one; they will one day regret this one, too, when the Senate majority inevitably changes — as it always does.

Mr. Obama delivered a statement to reporters hailing the move to end what he dubbed “unprecedented” obstruction.

“Public service is not a game. It is a privilege. And the consequences of action or inaction are very real. The American people deserve better than politicians who run for election telling them how terrible government is, and then devoting their time in elected office to trying to make government not work as often as possible,” Mr. Obama said.

No matter how things move forward, this will certainly be an issue for Senate hopefuls and incumbents during next year’s midterm elections.

The NewsHour examined the change, then Gwen Ifill fielded a debate between Sens. Ron Johnson, R-Wis., and Jeff Merkley, D-Ore.

The late Sen. Robert Byrd “has got to be rolling over in his grave,” Johnson said. Merkley countered it’s the GOP’s own fault. “What brought this to a head today was a decision by the minority that they were going to block any nominee, no matter their qualifications, no matter their high character, if the president — if they were nominated by President Obama. And that type of approach is just completely unacceptable,” he said.

With Congress on a break next week, the Morning Line will take a brief holiday. Hope everyone has a happy Thanksgiving. We’ll return Dec. 2. Keep an eye on the Rundown blog for breaking news throughout the day, our home page for show segments, and follow @NewsHour for the latest.

There will be a lot of remembrances and tributes paid to our nation’s 35th president Friday, on the 50th anniversary of his assassination. The NewsHour Friday night will examine Kennedy’s legacy in a detailed discussion with historians, and we have 10 reflections from a Secret Service agent, an ambassador, historians and bloggers about how Kennedy changed the world.

But we also offered a unique examination of how the dark day on Nov. 22, 1963 influenced two journalists for a lifetime. Robert MacNeil and Jim Lehrer were young reporters both covering Kennedy’s visit to Dallas. The NewsHour’s founders sat down with Judy Woodruff to share their indelible memories of JFK’s assassination and recounted their feelings of disbelief and grief.

Unfortunately, our #MJIA amendment crashed into the wall of obstructionism we have seen all too often in this broken Congress.

Funny. I just referred to it as “Nielsmas.” RT @nielslesniewski RT @bindersab This is my Superbowl.

Obama had another off the record sesh with journalists this morning at the White House, according to Fox News’s Juan Williams.

Some guy at PuffHo takes me on concerning the faked Obama unemployment report. So I had to explain it to him http://t.co/jA3tyINgYO

.@SenJohnMcCain just gave me incredibly detailed recipe/instructions for fried turkey. Must try it this thanksgiving!

Aileen Graef and Bridget Bowman contributed to this report.