This ex-CIA officer is making her first run for Congress. Can she push out a tea party star?

SPOTSYLVANIA, Va. — On a picturesque late October afternoon, Abigail Spanberger stood outside a winery in traditionally conservative Spotsylvania County, making the case for why voters should send a Democrat to Congress.

She honed in on health care, something many voters say is a very important factor in how they’ll vote in the 2018 midterm elections, pledging to increase access to affordable health care and keep protections for people with pre-existing conditions.

It’s a message that’s resonated among Democrats in other House districts across the country this year, but among Republicans, who dominate Virginia’s 7th Congressional District, the issue is a harder sell.

On this day, though, the crowd seemed to embrace the strategy; the former CIA operative was mobbed by supporters angling for a picture. Spanberger obliged, flashing a practiced smiled that belied her inexperience in politics.

Ever since winning the Democratic primary in June, Spanberger has drawn attention, not only for taking on two-term Republican Rep. Dave Brat, best known for upsetting then-House Majority Leader Eric Cantor in the 2014 Republican primary, but also because of what she brings to the race as a first-time candidate who has helped force the district into toss-up territory.

Virginia’s 7th Congressional District is the type of mixed suburban and rural House seat that Republicans cannot afford to lose.

She’s one of a record number of female candidates seeking office nationwide, in this case inspired to run because of the GOP’s failed effort last year to repeal the Affordable Care Act. And though Spanberger is not a veteran, her CIA career makes her part of a wave of Democratic candidates this cycle who served in the military or have intelligence or national security experience — a background more often seen among Republican candidates in recent cycles.

Virginia’s 7th Congressional District, which stretches across parts of the north-central exurbs of Washington, D.C., to the northern and western suburbs of Richmond, is the type of mixed suburban and rural House seat that Republicans cannot afford to lose. Democrats started the 2018 midterms by targeting the country’s divided 25 House seats: districts that voted for a a Republican House lawmaker in 2016 but also voted for Hillary Clinton for president.

Trump won Brat’s district by six points two years ago, and Brat carried it by a 15-point margin. But in the final weeks of the midterms, the party’s map has expanded, as Democrats have gained ground competing in districts like Brat’s.

Brat, a hardline conservative who has become one of the leading anti-immigration, anti-Obamacare voices in the conservative House Freedom Caucus, now finds himself fighting to win over voters in the district’s left-leaning suburbs, which have grown and become an increasingly important voting bloc since he was elected four years ago.

Spanberger, who was working in the private sector when she decided to run for office, has centered her campaign on local issues in an effort to avoid turning the race into a referendum on Brat or President Donald Trump — a strategy aimed at appealing to the district’s moderate voters without alienating its Democratic base. 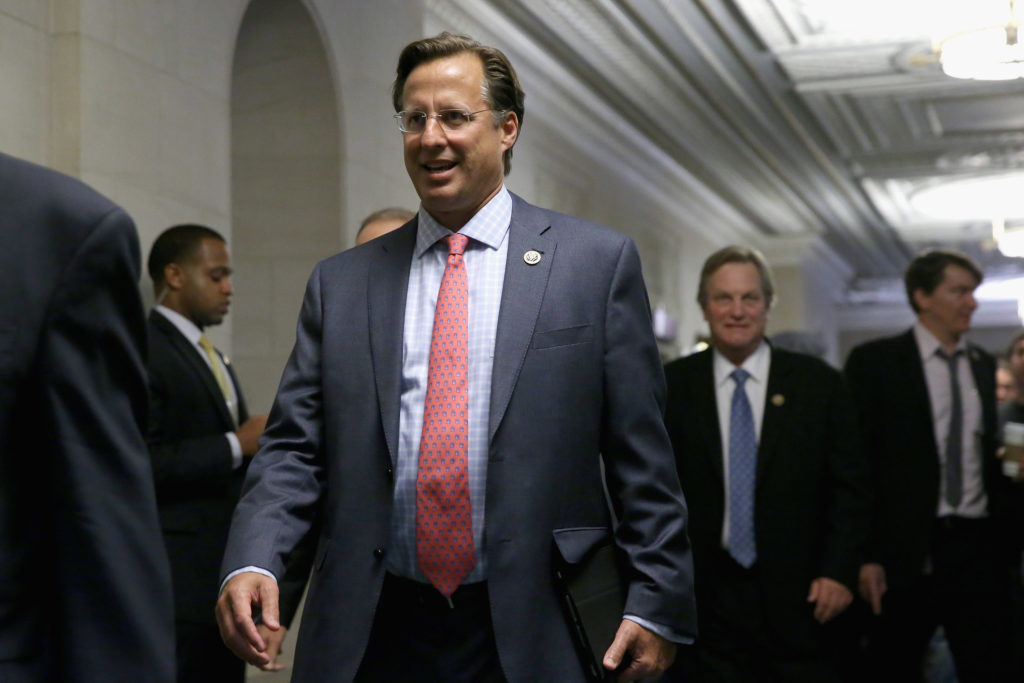 Since joining Congress in 2015, Rep. Dave Brat, R-Va., has emerged as an outspoken member of the conservative House Freedom Caucus. (File photo by Chip Somodevilla/Getty Images)

A spokesperson for the Brat campaign declined to answer questions about the race, or make the candidate available for an interview. Republicans acknowledged the challenges of a GOP lawmaker running in moderate district in a state Clinton won in 2016.

“Obviously, the state didn’t vote for Donald Trump,” said Jon Russell, the chair of the Culpeper County Republican Party. “Virginia Republicans are not getting an opportunity to introduce themselves on their own merits and on their personalities. Voters are just saying, ‘Hey, you with them [or] are you against them?”

But some Brat supporters, like Brett Duckworth of Culpeper, believe Spanberger’s bipartisan message is just her in “campaign mode.”

“You’re going to say what people want to hear,” he said. “And then when you actually get into Washington, things are completely different.”

Spanberger doesn’t see it that way. “There may be issues where you cannot find agreement, but working across party lines” is still important, Spanberger said in an interview with PBS NewsHour at her campaign stop in Spotsylvania. She added that voters want lawmakers whose goal is “understanding why people disagree with you in the first place, and then trying to find compromise.”

The party’s map has since expanded and in the final weeks of the election Democrats like Spanberger are competing hard in districts like Brat’s. Trump won it by six points two years ago, and Brat carried it by a 15-point margin.

Spanberger said she believed the district could flip blue if voters latch onto her moderate message. She pointed to immigration as one area where she would be willing to work across party lines, noting her support for a bipartisan House bill that would increase border security but also protect young undocumented immigrants known as “Dreamers.”

She also touched on rural access to broadband internet, an issue in several counties in the district. “Many rural communities are represented by more conservative members of Congress” who oppose policies that could improve voters’ lives, Spanberger said. Expanding internet access is “not a partisan issue, it’s an economic development issue, and it’s an infrastructure issue.”

Spanberger’s message seems to be resonating with some voters in the district. Her focus on pragmatism and accountability is an antidote to the vitriol and divisiness coming out of Washington, said Aleta Strickland, a Democrat and Spanberger volunteer from Louisa.

One high-profile example came after the House Republican-aligned Congressional Leadership Fund ran a television ad accusing Spanberger of teaching at a school that trained al-Qaida militants. Spanberger worked as a substitute teacher at the Saudi-funded Virginia school in 2006, while waiting for her background check for the CIA to be completed. 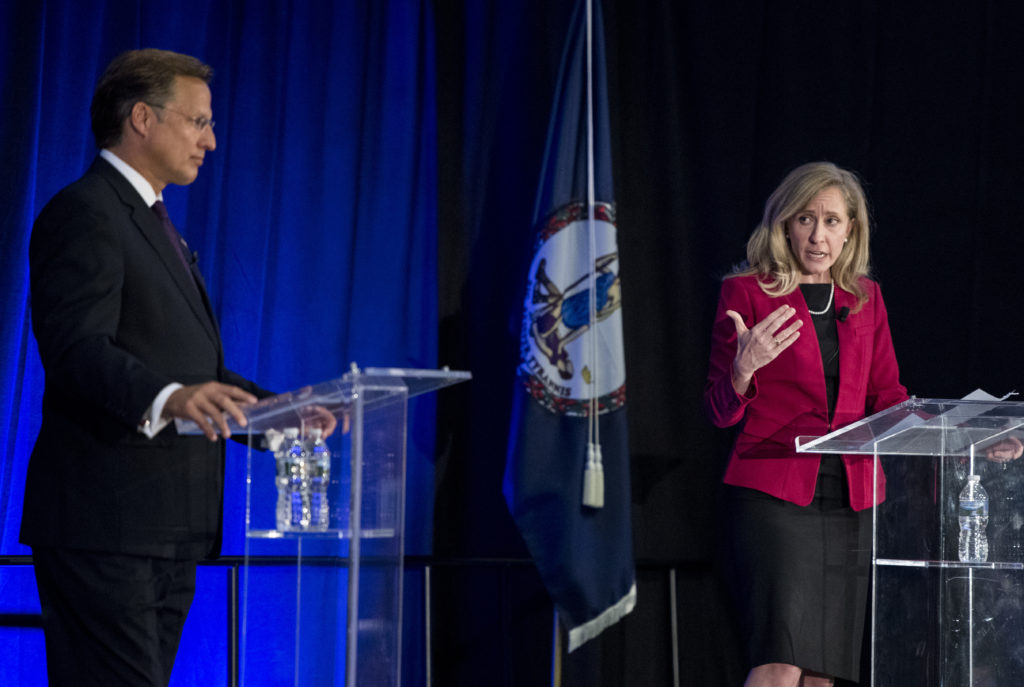 “I understand the theories of mudslinging,” Strickland said in an interview after canvassing for Spanberger in rural Louisa County Saturday afternoon. “I just don’t think it’s a good thing to do.”

Before 2016, Strickland’s political activism started and stopped at the ballot box. But after Trump’s victory, Strickland said she was angry and looking for anyone who felt the same way in her conservative rural community.

When Tammy Purcell started a local chapter of the liberal group Indivisible, Strickland quickly joined. Now, they’re part of a 30-plus person group knocking on doors for Democratic candidates.

“People will say ‘nobody has ever come to my door,’” when they show up, Strickland said. “In Louisa, in Culpeper, in Amelia, in Powhatan — in all those tiny little rural counties [Spanberger’s] gotta have some showing.”

Some voters said they weren’t convinced by Spanberger’s outreach. “She seems to be more geared toward the urban populace” in the district, said Susan Gugino, a poultry and cattle farmer who lives near Culpeper.

While Spanberger, like other Democrats, is hoping to drive up turnout in rural areas, she’ll also need to make big gains in the suburbs to win on Nov. 6. In that way, her campaign is relying at least in part on the standard Democratic calculus that there are enough liberal and left-leaning independent voters in the suburbs to offset turnout from traditionally conservative voters in rural areas.

Democratic Gov. Ralph Northam offered a road map last year, when he won the governor’s race. Though he lost Brat’s congressional district by four points, he carried Henrico County, which includes the suburbs around Richmond, and nearby Chesterfield County — two traditionally red parts of the state.

This year, polling in the Spanberger-Brat race has been consistently close. An October poll from Christopher Newport University shows Spanberger up one point among likely voters, and Democrats held a 16-point lead among voters who said they were very enthusiastic about the election. She has also consistently outraised and outspent Brat, earning endorsements from former President Barack Obama and former Vice President Joe Biden and raising more than $3 million for her campaign in its final months. 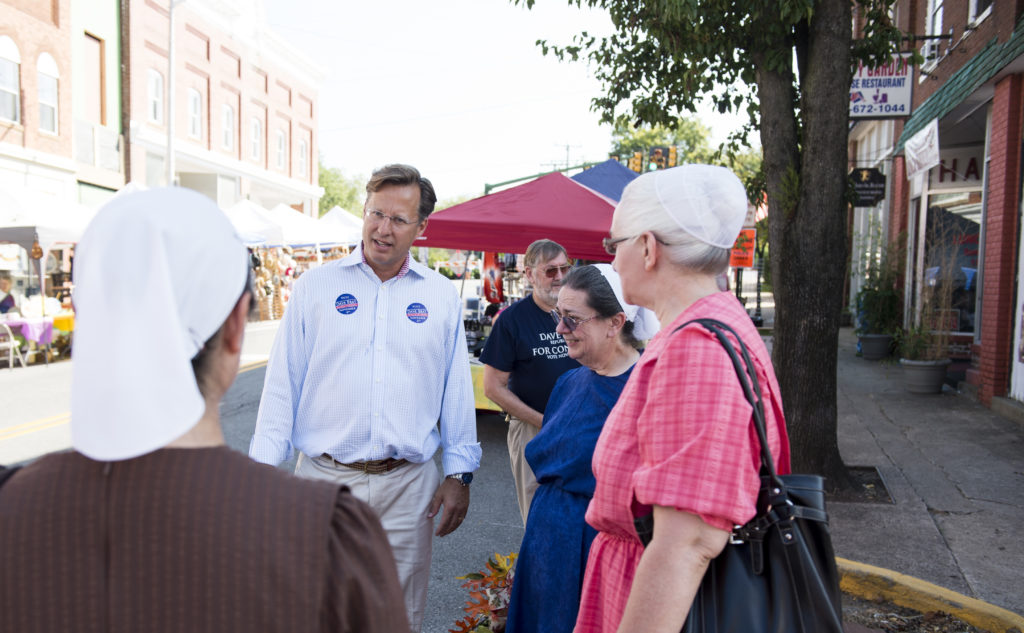 But in recent weeks polls show the enthusiasm gap between the two parties is shrinking. Republicans credited the shift to the GOP’s response to the contentious confirmation hearings for Justice Brett Kavanaugh.

Since the Civil War the party that doesn’t control the White House has gained on average of 32 House seats in midterms.

As Virginia-based GOP strategist Tucker Martin put it, Republican voters are “motivated right now. It’s just that the Democratic base may be more motivated.”

For many liberal female voters in Virginia’s 7th District, the Kavanaugh hearings sparked feelings of anger and frustration that lingered from Clinton’s loss in 2016.

When it came to the congressional race, “we knew we wanted that good candidate and that we better damn get out there and support her,” said Kim Wright, a founding member of the group Liberal Women of Chesterfield County, which formed after the 2016 elections. She added, “We can’t just sit around with our heads in our hands and expect someone else to do it. It’s all of our jobs.”

Republicans argued that groups like the Liberal Women of Chesterfield County are out of step with the district’s moderate electorate. Russell predicted that voters would reward Brat for remaining an outsider after going to Congress.

“There’s times he’s had to say no to the President and times that he’s been on board,” Russell said of Brat. “He hasn’t become part of the swamp, and that’s important to people who live where we live.”

Democrats said they were determined to prove Brat’s supporters wrong. “We’re all about expanding the map,” said Purcell, the Indivisible group leader from Louisa. “And letting people know that there are progressives everywhere.”