‘Those shootings happen all the time in America.’ The view from Juárez

Ciudad Juárez, Mexico — Pedro Enriques plans to cross the border from Juárez to El Paso to shop at the city’s Walmart as soon as the store reopens following Saturday’s mass shooting.

The idea of shopping at the store where a gunman killed 22 people is eerie, Enriques said in an interview Tuesday in Juárez, the Mexican city located just over the border from El Paso. But he needs a new pair of dress shoes, and the Walmart in El Paso — popular among Mexican shoppers because of the $1.50 bus that runs directly between there and Juárez — has better prices than the stores on Mexico’s side of the southern border.

“The reality is, people on the border are used to life in El Paso and Juárez, and going back and forth” between the two cities, he said. “Eventually, things will go back to normal,” adding that he’d go to the Walmart “this weekend if it’s open.” (A person who answered the phone for the number listed for the store said it was closed until “further notice.”)

The routine is a small window into the cross-border way of life for many in Juárez and El Paso. Families have long lived on both sides of the border, and residents on both sides make trips daily across the Rio Grande River to work, shop and see friends and relatives. The shooting in El Paso won’t change that, Enriques said.

“Those shootings happen all the time in America.”

Other agreed. At a busy bus stop near one border checkpoint in Juárez, Jose Rodriguez said the shooting wouldn’t stop him from visiting El Paso. “I’m not afraid,” he said.

Rodriguez noted that he wasn’t surprised when he learned of the attack on the news. “Those shootings happen all the time in America,” he said.

But several people said they were rattled that a deadly attack was carried out so close to home, in a city whose officials claim is one of the safest in the U.S.

Earlier this year, El Paso was at the center of a debate over border safety after President Donald Trump singled it out in his State of the Union speech.

In promoting his plan to build a border wall between the U.S. and Mexico, Trump claimed without evidence in the speech that El Paso had “one of highest” violent crime rates in the U.S., but that a barrier at the border had made the city much safer.

Officials from El Paso responded that Trump’s claim was false and pointed to statistics that show crime rates in El Paso went down in the mid-1990s and early 2000s.

Maria Ravelo said she frequently crossed over the border into El Paso to shop at the Walmart where the shooting took place, and other stores, without running into any issues. But the recent attack was giving her pause, she said. 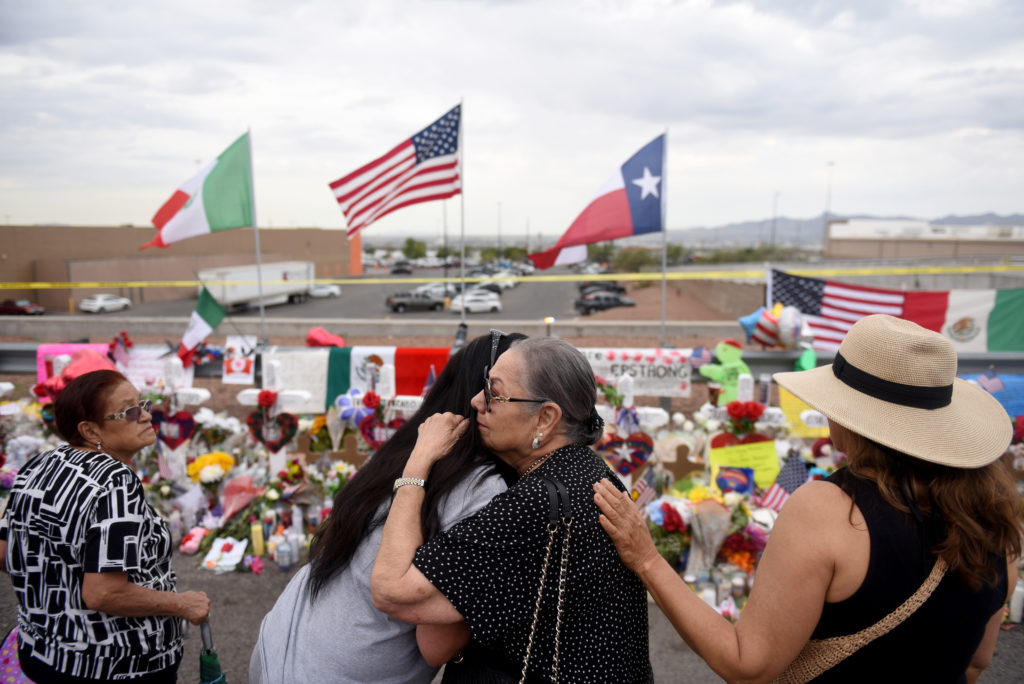 People gather to pay their respects at a memorial three days after a mass shooting at a Walmart store in El Paso, Texas. REUTERS/Callaghan O’Hare

“I’m scared. I’m thinking about not going to the stores in El Paso for a while,” she said. But Ravelo added that staying away from El Paso altogether was not an option, since some goods were cheaper on the U.S. side of the border.

It was difficult to independently confirm the difference in prices between stores in Juárez and the Walmart that was attacked last Saturday, because it remains closed. But there was a noticeable difference in the cost of some goods on both sides of the border.

On a shop-lined street in Juárez approaching one border crossing, women’s sandals and flats sold for 200 to 400 pesos — or $10 to $20. Similar items in stores directly over the bridge in El Paso sold for as little as $1.99.

Margarito Valdez, who was born in Juárez but lives in El Paso, said the economies of both cities were deeply intertwined in ways that extended beyond the cost of basic goods. Valdez and his wife Jacinta had stopped to talk on the way to a dentist’s appointment in Juárez. He said he crosses over the border into Mexico for dental care because the costs are so much lower than in El Paso.

The Valdezes seemed in agreement that the shooting would not disrupt their daily routines. On the issue of who is to blame for the attack, however, the couple and others interviewed in Juárez had mixed feelings.

Rodriguez said that Trump could not be held accountable for the attack, even if some of the views the shooter espoused in an online manifesto published shortly before the massacre mirrored the president’s anti-immigrant rhetoric .

“I don’t think Trump is responsible. He didn’t send the guy to do it,” Rodriguez said.

But others expressed more anger with Trump, citing his long history of anti-immigrant rhetoric as a candidate and president. While Trump has defended his characterization of Mexicans, sometimes saying he wasn’t referring to all Mexicans when he spoke that way, many said they took his verbal attacks personally, and felt Trump had made it more acceptable for other Americans to do the same.

“I think it all comes from the president. He came in with all this racism,” Jacinta Valdez said.

Enriques, for his part, said he believed Trump’s rhetoric and the attack in El Paso were linked.

“Would I say he’s directly responsible? No. But Trump has a tendency to show aggression to Latinos and [especially] Mexicans,” he said. “This massacre is connected to Trump and his rhetoric.”

Left: A mourner takes part in a vigil near the border fence between Mexico and the U.S after a mass shooting at a Walmart store in El Paso U.S. in Ciudad Juarez. August 3, 2019. REUTERS/Carlos Sanchez