WASHINGTON — Officials across the country pleaded with Americans to curb their enthusiasm for large Fourth of July crowds Saturday even as President Donald Trump enticed the masses with a “special evening” of tribute and fireworks staged with new U.S. coronavirus infections on the rise.

Several hours before Trump’s “Salute for America” celebration, people filed to the National Mall in baking heat and took shade under the scattered trees while, not far away, music wafted from a party on the White House South Lawn. To come: Trump’s speech from the White House grounds, a military air show and a more ambitious fireworks display than has been seen in years.

The early crowds were noticeably thinner than on the afternoon of last year’s jammed celebration on the National Mall. Many who showed up wore masks.

But not Pat Lee of Upper Dublin, Pennsylvania, or the two friends she came with, one a nurse from Fredericksburg, Virginia, whose only head gear was a MAGA hat.

“POTUS said it would go away,” Lee said of the pandemic, using an acronym for president of the United States. “Masks, I think, are like a hoax.” But she said she wore one inside the Trump International Hotel, where she stayed.

By the World War II Memorial, the National Park Service handed out packets of five white cloth masks to all who wanted them. People were not required to wear them.

In many parts of the country, authorities discouraged mass gatherings for the holiday after days that have seen COVID-19 cases grow at a rate not experienced even during the deadliest phase of the pandemic in the spring.

In New York, once the epicenter, people were urged to avoid crowds and Nathan’s Famous July Fourth hot dog eating contest happened at an undisclosed location without spectators on hand, in advance of the evening’s televised fireworks spectacular over the Empire State Building.

In Philadelphia, mask- and glove-wearing descendants of the signers of the Declaration of Independence participated in a virtual tapping of the famed Liberty Bell on Independence Mall and people were asked to join from afar by clinking glasses, tapping pots or ringing bells.

Yet Trump continued to crave big crowds when it came to his events.

He opened the holiday weekend by traveling to Mount Rushmore in South Dakota for a fireworks display Friday night near the mountain carvings of George Washington, Thomas Jefferson, Abraham Lincoln and Theodore Roosevelt. In stark words, he accused protesters who have pushed for racial justice of engaging in a “merciless campaign to wipe out our history.”

Even as he pushed ahead with celebrations, the shadow of the coronavirus loomed closer to him. Kimberly Guilfoyle, a top fundraiser for the president and girlfriend of his eldest child, Donald Trump Jr., tested positive for the virus, Trump’s campaign said late Friday. Guilfoyle tweeted Saturday that she was looking forward to “a speedy recovery.”

In a presidential message Saturday on the 244th anniversary of the adoption of the Declaration of Independence, Trump acknowledged that “over the past months, the American spirit has undoubtedly been tested by many challenges.” 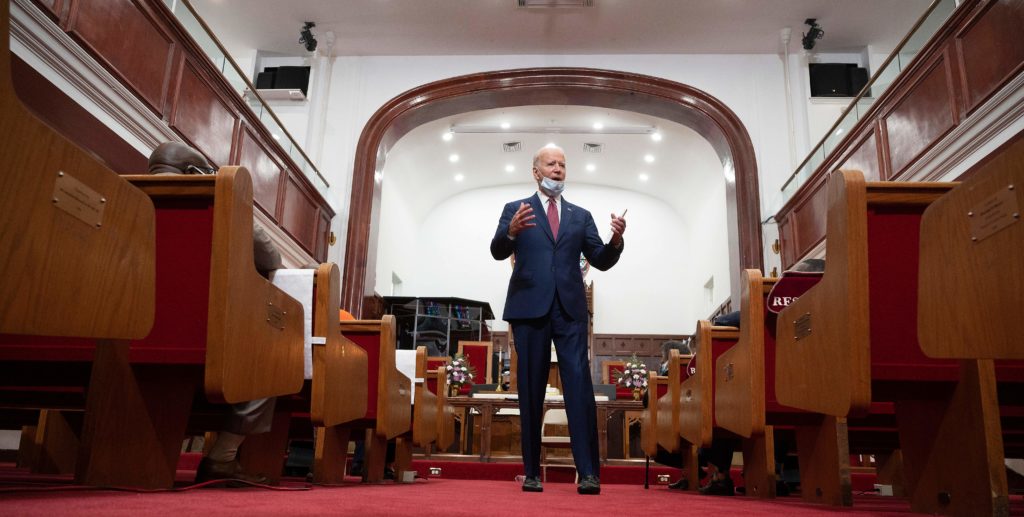 Former vice president and Democratic presidential candidate Joe Biden meets with clergy members and community activists during a visit to Bethel AME Church in Wilmington, Delaware on June 1, 2020. – Democratic presidential candidate Joe Biden visited the scene of an anti-racism protest in the state of Delaware on May 31, 2020, saying that the United States was “in pain”. “We are a nation in pain right now, but we must not allow this pain to destroy us,” Biden wrote in Twitter, posting a picture of him speaking with a black family at the cordoned-off site where a protesters had gathered on Saturday night. Photo by JIM WATSON / AFP)

His Democratic rival, Joe Biden, said in a statement that the U.S. “never lived up” to its founding principle that “all men are created equal,” but today “we have a chance to rip the roots of systemic racism out of this country.”

Trump planned to use the speech to salute the U.S. military and pay tribute to American values, heroes and accomplishment, according to a Trump aide who was not authorized to comment by name. The aide added that Trump sought to use the speech to contrast his outlook with Biden’s remarks suggesting that America has not always lived up to its ideals.

Trump’s endorsement of big gatherings at the National Mall and at Mount Rushmore came as many communities decided to scrap fireworks, parades and other holiday traditions in hopes of avoiding yet more surges in infection.

Confirmed cases are climbing in 40 states, and the U.S. set another record Friday with 52,300 newly reported infections, according to the tally kept by Johns Hopkins University. 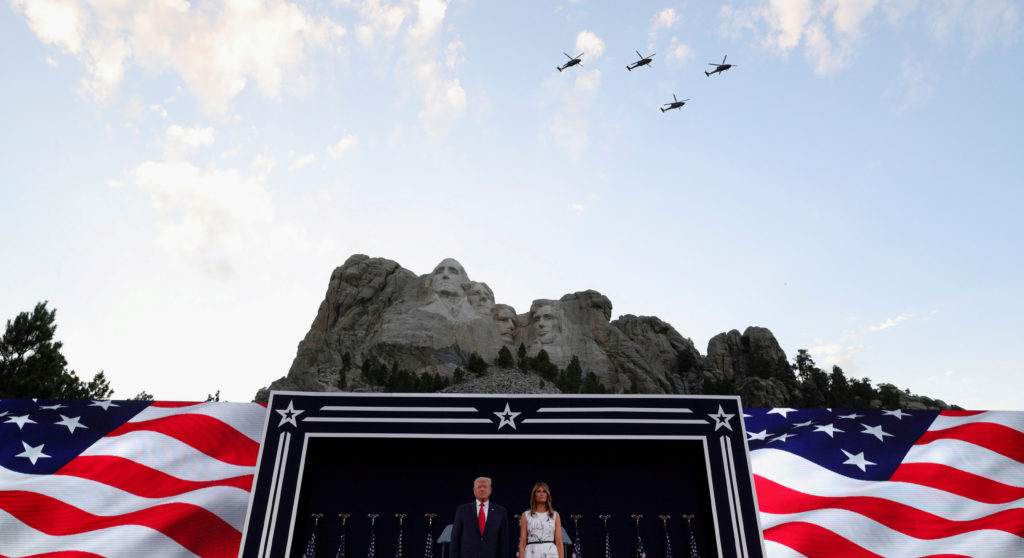 The Centers for Disease Control and Prevention cautions that mass gatherings like the one scheduled for Washington present a high risk for spread of the virus. Yet Surgeon General Jerome Adams sidestepped when asked if he would caution a loved one against attending a large gathering. He said people should wear masks and otherwise make up their own mind.

Trump has been aching to see the nation return to normalcy, and has been willing to push the envelope farther than many states and big city mayors are willing to go.

District of Columbia Mayor Muriel Bowser said she didn’t have the right to shut down the holiday spectacle because it’s on federal land. But she warned the federal government about the dangers of such a large crowd and told her constituents: “Just because someone invites you to a party doesn’t mean you have to go.”

For Trump and the country, it was yet another holiday clouded by a pandemic that the U.S. has failed to bring under control.

In late March, a little more than a week after he bowed to the need to shut down much of the country, Trump spoke of reopening with “packed” churches by Easter Sunday. He relented on that push as his medical advisers warned that it was far too ambitious. Then he spent chunks of his Memorial Day weekend fuming about critics who he said were ignoring falling cases and deaths at the time.

With the Independence Day holiday, he told Americans that the nation is “getting close to fighting our way” back. His rosy outlook was out of sync with officials in swaths of the South and West pulling back on reopening because of a surge of cases in their communities.

“A lot of things are happening that people don’t quite see yet, but you’ll see over the next couple of months,” Trump said in a video message on Twitter.

In other holiday weekend developments:

—California’s Gov. Gavin Newsom warned counties that they risked losing state money if they failed to enforce health orders on the holiday weekend. He urged residents not to gather with people they don’t live with and to avoid crowds. Fireworks shows in Los Angeles, San Francisco, San Diego and elsewhere in the state were canceled.

—Illinois Gov. J.B. Pritzker, also a Democrat, said he would not hesitate to close down businesses that don’t abide by capacity requirements. He, too, encouraged people to avoid large crowds.

—Florida’s most populous county, Miami-Dade, closed beaches through the weekend, and South Florida municipalities from Vero Beach to Broward County did the same. Beaches in the Florida Keys were closed, too. In California, beach closures extended from Los Angeles County northward through Ventura and Santa Barbara counties. To the south in Orange County, officials ordered hugely popular beaches such as Huntington and Newport closed Saturday and Sunday.

—Four East Coast cities — Boston, New York, Philadelphia and Baltimore — were to get their own mini-displays of air power before an extensive military air show over Washington.

—About 150 preachers, rabbis and imams were framing holiday sermons around the theme “What to the Slave is the Fourth of July?” That speech was delivered in Rochester, New York, 168 years ago by abolitionist Frederick Douglass, who was born in slavery.

Left: A couple dressed with the colours of the U.S. flag ride their motorcycle in front of the U.S. Capitol Building Washington, U.S., July 4, 2020. Photo by Joshua Roberts/Reuters.