Trump wouldn’t sit down with Mueller’s team. Read his written responses instead

Toward the end of Robert Mueller’s report is a much sought-after component to the two-year-long Russia investigation: written responses to the special counsel’s questions from the man at the center of the probe.

Mueller and his team interviewed hundreds of witnesses across 22 months, but President Donald Trump’s legal team repeatedly declined the special counsel’s requests for a sit-down interview with the president. The report released Thursday said that Mueller’s team tried to interview Trump for more than a year.

Trump “stated on more than 30 occasions that he does not ‘recall’ or ‘remember’ … information called for by the questions,” the report noted.

The agreement Mueller ultimately made with Trump’s lawyers was for the president to submit written responses to questions, excluding any queries related to obstruction of justice. Trump’s answers, provided in the full report across 12 pages, were sent in late November 2018. Mueller’s team found them “inadequate.”

Trump “stated on more than 30 occasions that he does not ‘recall’ or ‘remember’ or have an ‘independent recollection’ of information called for by the questions,” the Mueller report noted. Other answers were deemed “incomplete” or “imprecise.” And when Mueller’s team requested a follow-up with Trump to ask more questions, he declined.

Following the submission of Trump’s questions, there were questions of whether Mueller would issue a subpoena to have the president testify before a grand jury — but that never happened. The Mueller report explains why on pg. 418: It could have meant a protracted legal battle that would have delayed the investigation.

The report also said: “We determined that the substantial quantity of information we had obtained from other sources allowed us to draw relevant factual conclusions on intent and credibility, which are often inferred from circumstantial evidence and assessed without direct testimony from the subject of the investigation.”

Trump answered questions on several Russia-related threads in the ongoing investigation, including WikiLeaks and hacked emails, Russian hacking efforts, and a 2016 Trump Tower meeting between Trump campaign officials and a Russian contact.

Trump largely said he wasn’t aware of “specific efforts by foreign individuals or companies to assist [his] campaign through the use of social media postings or the organization of rallies.”

Read the president’s full answers below. 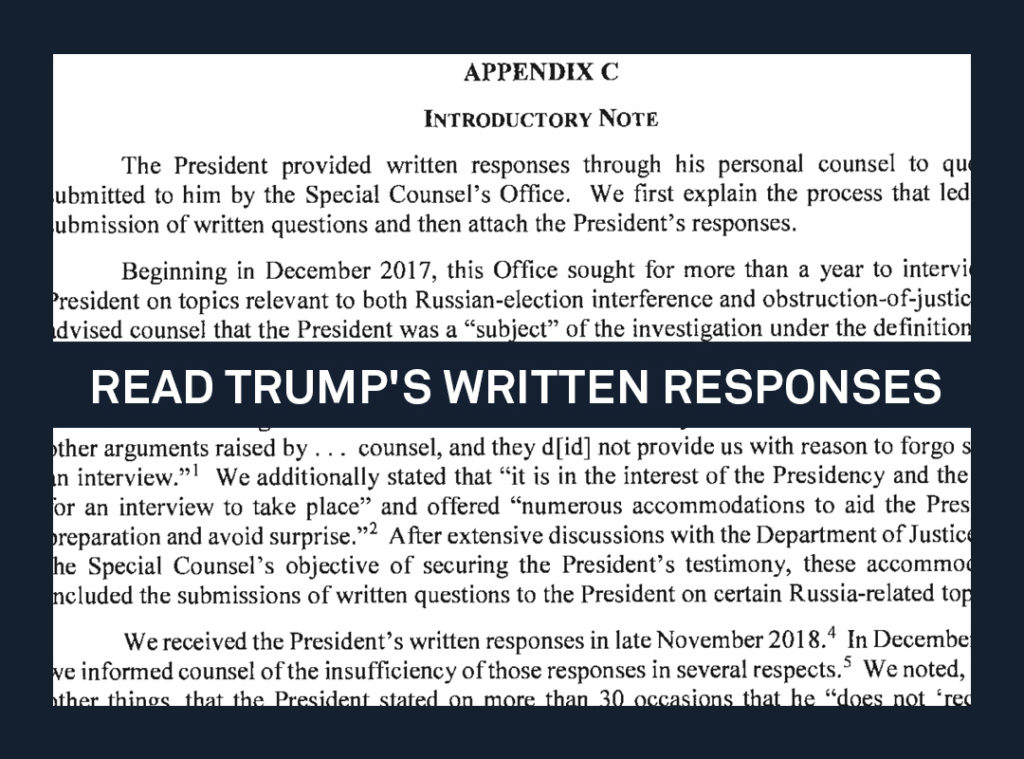 READ MORE: What Trump and lawmakers are saying now that the Mueller report is public

Left: Media films a few pages of special counsel Robert Mueller's report on Russian interference in the 2016 election which was printed out by staff in the House Judiciary Committee's hearing room. Photo by Tom Williams/CQ Roll Call