U.S. claims reducing refugee numbers helps with the asylum backlog. Will it?

The Trump administration has claimed that capping the number of refugees admitted to the U.S. will reduce the significant backlog of asylum seekers. But immigration experts argue that backlog can be cut in other ways.

For the 2020 fiscal year, which started Tuesday, the U.S. plans to cap the number of refugees admitted into the U.S. at 18,000–the lowest admitted under the modern-day refugee system.

In announcing the shift, Homeland Security Secretary Kevin McAleenan said reducing refugee admissions will allow the Department of Homeland Security to focus more resources on immigration at the U.S.-Mexico border and reduce the asylum case backlog. But, asylum seekers and refugees go through two separate processes and history shows the U.S. has the ability to accept more refugees than it is currently accepting.

“The U.S. is more than capable of processing both refugee and asylum claims at the same time,” said Eleanor Acer, the director of Human Rights First’s Refugee Protection program.

When the modern-day system for resettling refugees in the U.S. was created in 1980, for example, the federal government admitted more than 207,000 refugees in a single year. 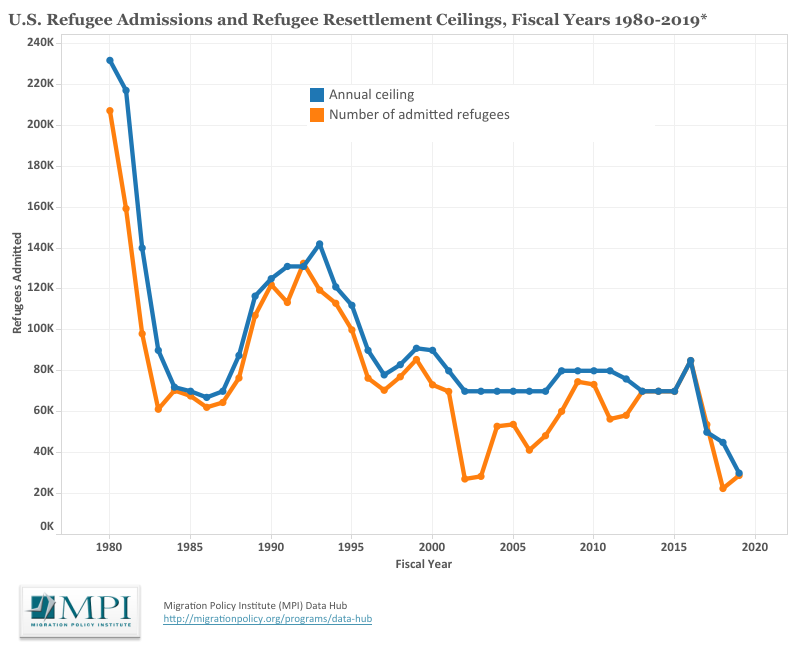 The cut in refugee admissions to the U.S. comes as the world has a record number of refugees–25.9 million, according to the United Nations. The largest share of the refugees are from Syria, where the U.S., supported rebel groups in that nation’s ongoing civil war for years.

This latest move will mark the third time the Trump administration has reduced the refugee cap.

In his first month in office, President Donald Trump limited the admission of refugees from majority-Muslim nations and slashed the refugee cap to 50,000 from 85,000, citing national security. The move, known widely as the “Muslim Ban,” was subject to several lawsuits, but a version of it was ultimately maintained. When the administration further cut the cap to 45,000 in 2018, Trump and other government officials cited a number of reasons, including national security, the asylum backlog and the cost of resettling refugees.

What is the asylum backlog?

There are more than 338,000 people waiting for asylum decisions from the U.S. Citizenship and Immigration Services, the department told the PBS NewsHour. That’s up from 320,000 cases in June of 2018, according to the Migration Policy Institute, which attributes the increase to an increase in asylum requests.

The spike in requests likely is the result of a number of factors, including worsening violence and climate change in Central America as well as the strong U.S. economy and smugglers telling migrants that they need to make the journey before the Trump administration makes it more difficult to enter the U.S.

“There is a crisis at our southern border where many people seeking economic opportunity are taking advantage of our asylum system to attempt to gain entry to the United States,” USCIS told the PBS NewsHour in a statement. “This continued abuse of our laws creates longer lines for legitimate asylum seekers and forces USCIS to divert resources to deal with this large, legally required workload.”

Over the past two years, USCIS has employed on average between 500 and 550 asylum officers and between 120 and 190 refugee officers. Currently about 80 refugee officers are already helping with asylum workloads, according to USCIS.

There are a number of places throughout the immigration system where the Trump administration has said they are overloaded. They claim not to have enough officers to apprehend people at the border, enough beds to house migrants, or enough judges to hear immigration cases. Congress has allocated money to alleviate some of those problems, but Democrats have also expressed belief that the Trump administration could do more to reduce backlogs without more resources.

How refugees differ from asylum seekers

When it comes to U.S. immigration, refugees are defined as people who are displaced from their homes and apply for entry to the U.S. while living abroad in places such as in a refugee camp. Asylum seekers have already come to the U.S., or at least reached the U.S. border, and are seeking permission to stay.

Both refugees and asylum seekers must prove that they fear persecution in their home country. USCIS makes that initial determination.

Refugees speak to a USCIS refugee officer while living abroad. If they are approved, their case continues through the process, which involves numerous other steps overseen by a handful of government agencies.

Asylum seekers are also interviewed by a USCIS officer, but that person initially only determines whether the person has a “credible fear.” If they meet the threshold, their cases are generally referred to immigration court, where a judge will make the final determination on whether a person is granted asylum.

In both cases, USCIS is only part of a much larger process.

The State Department, U.S. Department of Health and Human Services and countless nonprofit organizations handle other aspects of refugee cases, from determining where they will be resettled, to providing support for refugees to find jobs, and to get comfortable in cities across the U.S. 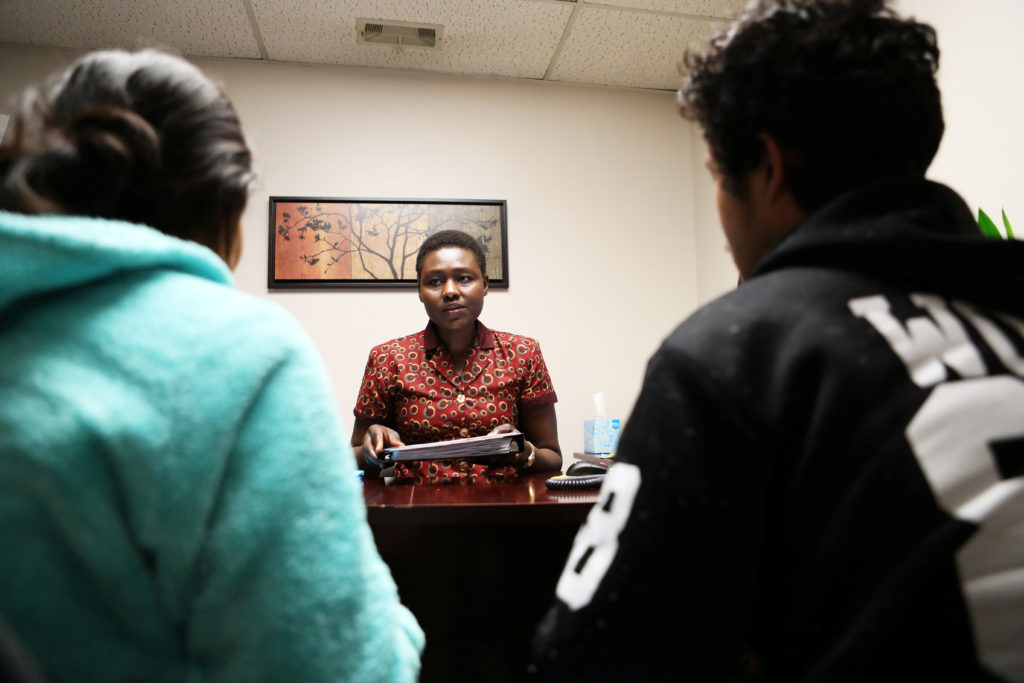 Eskinder Negash, CEO of the nonprofit U.S. Committee for Refugees and Immigrants, points out that refugees are supported, in part, through private donations through religious institutions.

The refugee system is “probably the most successful government partnership with local communities,” said Negash, who is a refugee himself and the former director of the U.S. Office of Refugee Resettlement.

For asylum seekers, the Department of Justice, Immigration and Customs Enforcement (ICE) and various nonprofits also play roles in getting migrants through the process and in the end, either deported to their home countries, or resettled in the U.S.

What is being done to reduce the asylum backlog?

Leon Rodriguez, USCIS director under President Barack Obama, said because USCIS is involved in the initial stages of both asylum and refugee cases, refugee officers can be easily retrained to handle asylum cases.

Key to moving from processing refugee cases to asylum cases is understanding what constitutes “credible fear” and being well-versed on the conditions in the Central American countries where most asylum seekers are coming from.

But, Rodriguez added, “the idea that the only option available to the administration is to take refugee officers away from their core tasks and to reassign them to asylum processing, presents a false choice.”

The Migration Policy Institute and other nonprofit organizations have suggested numerous other procedural changes to streamline the asylum process and reduce the backlog.

A larger share of the USCIS’ $4.8 billion budget for fiscal year 2020 could go toward hiring more asylum officers, or the Trump administration could send refugee officers to Central American countries to process claims there before people make the journey to the U.S., Rodriguez said.

The Trump administration has also implemented a metering system at ports of entry, so only a set number of asylum seekers are allowed into the U.S. each day. The rest have to wait in Mexico either in long lines near ports of entry or in shelters that are often overflowing with migrants.

The 338,000 asylum case backlog does not account for those migrants who have not yet been allowed into the U.S. 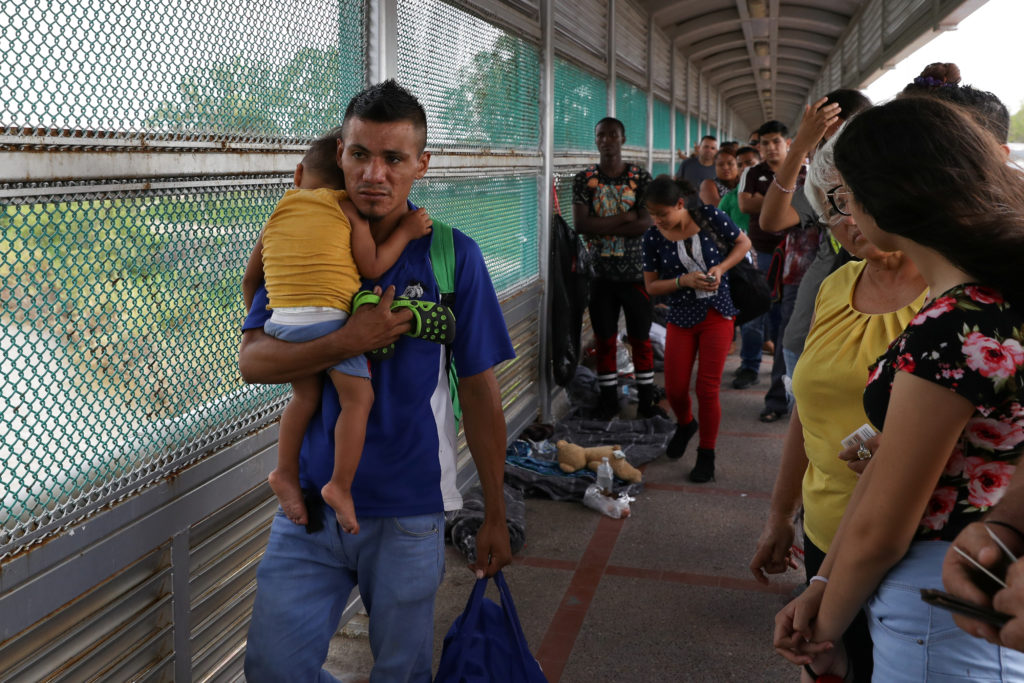 A Honduran father seeking asylum and his 2-year-old son are called by U.S. Customs and Border Protection officers for entry after waiting on the Mexican side of the Brownsville-Matamoros International Bridge near Brownsville, Texas, on July 2, 2018. In a process known as “metering,” U.S. immigration officials have only been allowing a set number of migrants through ports of entry each day. Photo by Loren Elliott/Reuters

The Trump administration also changed its policy to “last in, first out,” where it reviews the latest cases first and works backward. A USCIS report from earlier this year said since that process has been implemented, backlogs have dropped in some offices but increased in others.

Even if USCIS could eliminate the backlog for its asylum cases, many of those cases would likely be referred to immigration courts, where another backlog has ballooned in recent years.

There are more than a million pending cases in U.S. immigration courts, according to Syracuse University’s Transactional Records Access Clearinghouse, which tracks immigration cases.

Critics have argued the Trump administration’s own efforts to deport all undocumented immigrants, not only those with criminal histories, are making the immigration court backlog worse.

Nonprofit organizations have also recommended a host of other ways to reduce the larger immigration case backlog, such as hiring more judges and changing some of the rules of the immigration proceedings in order to make them more efficient.