US governors aim to boost production of medical supplies

JEFFERSON CITY, Mo. — Frustrated by scarce supplies and a chaotic marketplace amid the coronavirus outbreak, some U.S. governors are seeking to bolster their home-state production of vital medical and protective equipment to ensure a reliable long-term source for state stockpiles.

The efforts come as states have been competing against each other, the federal government, hospitals, emergency responders and even other countries to get items such as N95 masks, gloves, medical gowns and hand sanitizer — often paying higher-than-usual prices because of the high demand.

Before the coronavirus pandemic, the U.S. got much of its medical supplies from China. But China limited exports earlier this year amid its own fight against the virus, which began there. When the federal stockpile ran short, states that had only minimal supplies were left scrambling to try to buy needed equipment.

Governors in Florida, Indiana and Massachusetts — all, like Parson, Republicans — made similar statements this week, as states start to shift from triaging current needs to planning for a potential second wave of the coronavirus or some unknown future disease. While numerous U.S. companies have shifted production lines temporarily to make needed supplies, some states are looking for a long-term commitment. 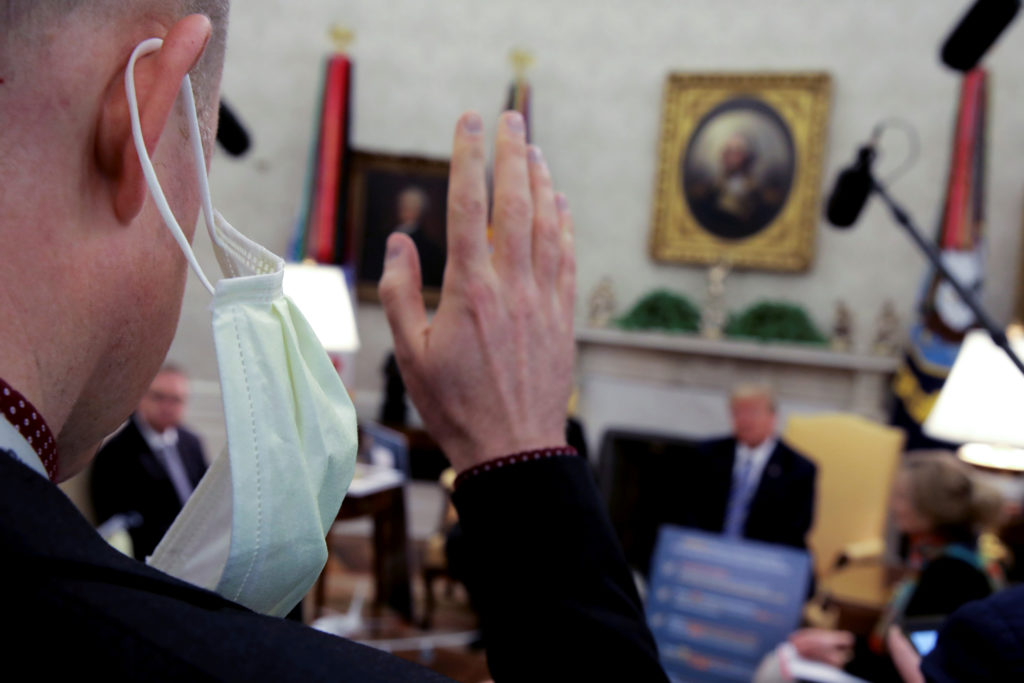 A reporter briefly removes his mask to ask a question as U.S. President Donald Trump meets with Florida Governor Ron DeSantis about the coronavirus response in the Oval Office at the White House in Washington, U.S., April 28, 2020. Photo by Carlos Barria/ Reuters.

The efforts align with a common campaign theme of Republican President Donald Trump, who has railed against American companies that moved jobs overseas. Trump has particularly accused China of unfair trade practices.

Florida Gov. Ron DeSantis, one of Trump’s closest allies, said at a press conference that one of the biggest problems the state faced when trying to obtain personal protective equipment is that much of it was manufactured in China and is slow to arrive.

“All this stuff should be made in the United States and not in China. We don’t want our health destiny resting in the hands of a communist dictatorship,” DeSantis said. “We would certainly welcome any of the manufacturing of the masks, the PPE kits, whatever you are doing. Come to Florida.”

The Federal Emergency Management Agency said in a statement to the AP that it “always encourages strengthening local capacity before requesting national assistance.” If states can get personal protective equipment through their own producers or donations, they may not need to request as much from the federal government, FEMA said.

To highlight the need for more local manufacturing, Massachusetts Gov. Charlie Baker toured a plant that has been working with his administration to adjust its textile production lines to make isolation gowns for health care workers. Though U.S. labor costs remain higher than in many foreign countries, he said the in-state production ultimately could be more affordable.

An AP review of more than 20 states last month found that before the coronavirus outbreak, many had only a modest supply of N95 masks, gowns, gloves and other medical equipment that, in some cases, were well past their expiration dates. The insufficient stockpiles stemmed from a variety of factors — a decline in public health funding, an assumption that more supplies could be quickly obtained when needed and a belief that the federal government could come to the rescue with its Strategic National Stockpile.

But the federal stockpile also proved insufficient, and states rapidly depleted their reserves.

Parson said he wants Missouri to build up a 30- to-60-day supply of personal protective equipment, which he said could help spur demand for new in-state manufacturers.

Ohio Gov. Mike DeWine, a Republican, announced this week that 19 local manufacturers will produce up to 1 million face shields over the next five weeks to add to the Ohio Department of Health stockpile.

When Honeywell announced plans last month to start making N95 face masks at a Phoenix facility, Republican Gov. Doug Ducey quickly announced that more than 6 million of those masks would go to the Arizona Department of Health Services over the next year to distribute to local health and safety agencies. The Arizona facility, when paired with another new Honeywell production site in Rhode Island, is expected to make about 20 million N95 masks a month.

Indiana Gov. Eric Holcomb said the coronavirus crisis provides “a huge opportunity” to build a supply chain for personal protective equipment in Indiana that not only could fulfill the state’s needs but also be sold elsewhere.

“This is a state (where) we make things; we always have,” Holcomb said. “This is a time that allows us to move into this field like maybe no other time.”

Left: Florida Governor Ron DeSantis speaks during a news conference at the Miami Beach Convention Center on the Army Corps' building of a coronavirus field hospital inside the facility, amid the coronavirus disease (COVID-19) outbreak, in Miami Beach, Florida, U.S. April 8, 2020. Photo by Al Diaz/Pool via REUTERS.