With Senate split 50-50, here’s what Democrats can and can’t do

Democrats now have a thin majority control in Congress, but passing sweeping legislation still won’t be easy. A rule requiring votes from 60 of the Senate’s 100 members in order to advance legislation may force President Joe Biden’s administration to modify its priorities on economic relief, climate change, racial equity and immigration in order to gain support from Republicans and moderate Democrats.

With just 50 members and a tie-breaking vote from Vice President Kamala Harris, Senate Democrats will have the power to confirm executive and judicial nominees and launch investigations in a range of areas.

While the 60-vote threshold remains the party’s biggest hurdle for change, Democrats have some mechanisms to potentially avoid the rules — or even upend them.

Why do Democrats have control in a 50-50 split Senate?

Control of the Senate came down to two January Senate runoff races in Georgia that resulted in historic Democratic victories for Raphael Warnock and Jon Ossoff who ousted two incumbent Republican senators. With an even split of senators, majority control goes to the party of the vice president, who under the Constitution acts as the president of the Senate. As vice president, Harris can cast a tie-breaking vote on measures if, and only if, the chamber is deadlocked.

Are Democrats in control of the Senate at this point?

Technically, yes, but they still have to work out some logistics. Chuck Schumer, D-N.Y., became majority leader, but he and Minority Leader Mitch McConnell, R-Ky., are working out an agreement over the rules that will guide Senate operations, such as how many members of each party will be on each committee. Until the final organizing resolution passes, Republicans retain control over Senate committees.

The two party leaders had been in a stalemate over the agreement; the filibuster, a tactic used to block legislation, has been a key sticking point. McConnell was seeking reassurance that Democrats will keep the filibuster, before he would agree to the rules needed for the new Senate.

MORE: Senate reaches agreement on filibuster rule, but reform is still on the table

Unless lawmakers unanimously agree to send measures directly to a final vote, most are subject to filibuster, which means they can be indefinitely delayed by debate until at least 60 members vote to end it. Without those 60 senators, the measure cannot move to a final vote, which generally requires a simple majority. Altering the filibuster, which McConnell fears, could give Democrats almost unchecked ability to pass their agenda in both chambers without any Republican support.

On Monday, McConnell backed away from his demand after Sens. Joe Manchin, D-W.V., and Kyrsten Sinema, D-Ariz., affirmed their opposition to eliminating the procedure, leaving Democrats without the numbers to move forward with such a measure.

The final power-sharing agreement has not yet been reached, but is expected to resemble a 2001 resolution reached when the Senate last had an even split. Democratic and Republican senators are expected to have equal representation on the chamber’s committees and any tie votes on nominees and legislation will go before the full Senate.

What advantages do Senate Democrats have in this bare majority?

Perhaps the most significant advantage for Democrats is the ability to confirm Biden’s Cabinet and Supreme Court nominations with a simple majority, or 51 votes. Each of these processes once required a 60 percent majority vote until senators moved in 2013 to lower the threshold to 51 votes to advance confirmations for most executive-level and federal judicial nominations. In 2017 senators established the same lower threshold to approve Supreme Court nominations.

Four Cabinet or Cabinet-level members have been confirmed by large margins for Biden’s administration so far, including Lloyd Austin as the first Black secretary of defense and Janet Yellen as the first woman to serve as treasury secretary. Austin and Yellen were confirmed by 93-2 and 84-15 votes, respectively. Nineteen of Biden’s nominees are still awaiting confirmation votes.

As the majority party, Democrats are expected to control the agenda for Senate operations, including policy and oversight committees.

READ MORE: How does the filibuster work?

Such committees include the Senate Judiciary, charged with confirmation hearings for federal judges and Supreme Court justices, as well as oversight of the Justice Department. The incoming Senate Judiciary chair Dick Durbin, D-Ill., has already expressed plans to probe former President Donald Trump’s efforts to overturn the 2020 election results.

On specific legislation, Schumer can also bring measures to the Senate floor for debate that would force members to vote on whether to end debate and move to final passage. This can be valuable for a majority party even if the bill does not pass, said Josh Chafetz, a professor of law with Georgetown University.

“Sometimes forcing members of the other party to vote against something is really valuable. It gives you a sort of talking point in the next election,” Chafetz said.

What limitations will Senate Democrats face in passing legislation?

Most proposed legislation can be filibustered by members of the minority party, which means 60 members must agree to end debate and move the bill to a final vote.

The use of the Senate filibuster has become increasingly more common since the 1700s and is now a routine way of obstructing legislation. Concerns about increasing partisan gridlock have sparked debate over whether to reform the legislative filibuster, which would give the majority party vast authority to pass bills. During the recent filibuster debate between McConnell and Schumer, President Joe Biden remained silent on the issue. Other lawmakers in the past, including Sen. Elizabeth Warren, D-Mass., have called to do away with it. 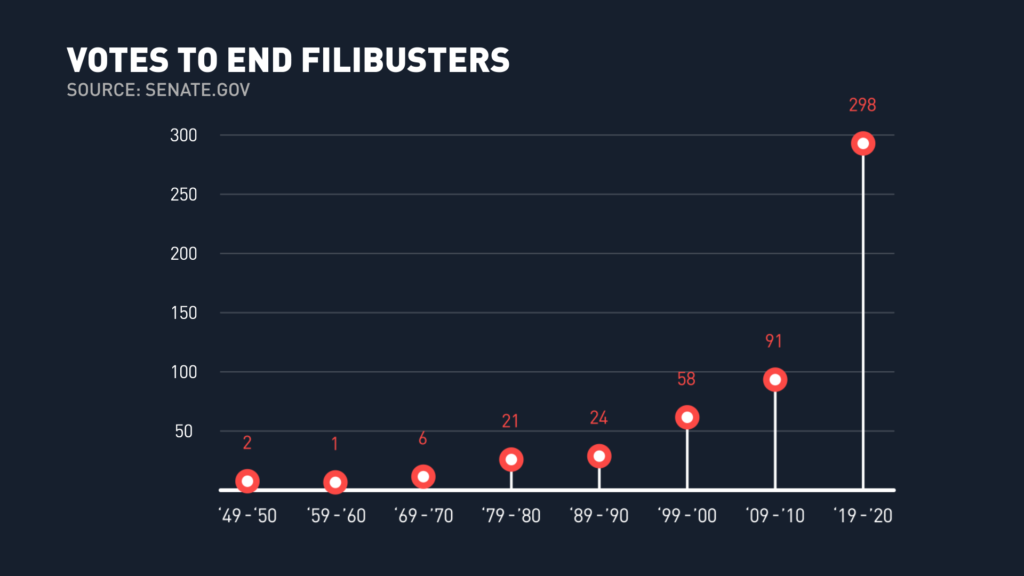 Senate filibuster use over time. Graphic by Danny Davis and Kate Grumke/PBS NewsHour.

Even with the filibuster intact, Democrats can still pass some major budget-related measures through a process known as reconciliation, which allows legislation to be passed with only 51 votes. Lawmakers can pass one reconciliation bill per budget cycle, but there are restrictions, said Eleanor Neff Powell, an associate professor of political science at the University of Wisconsin-Madison.

“There are some very narrow rules around it. … It has to have budgetary implications. You can’t just stick on any random thing. It has to actually be pretty narrowly tailored,” Powell said.

Biden’s goal of working across the aisle indicates his interest in pursuing legislation through bipartisan negotiation first before considering the reconciliation process. But some Democratic senators, including Bernie Sanders, I-Vt., appear prepared to push that tool.

Among Biden’s priorities, his administration has proposed a $1.9 trillion COVID-19 relief package that would include $400 a week in extended federal unemployment insurance through September, and $1,400 economic relief checks, among other assistance. His platform also calls for a $1.7 trillion investment over 10 years in clean energy and environmental justice.

READ MORE: What we know about Trump’s second impeachment trial

Democrats could use reconciliation to pass Biden’s pandemic relief and tax reform proposals and to accomplish some climate change or health care reform. Sanders has also suggested using reconciliation to establish a $15 minimum wage. But hotly debated progressive proposals such as “Medicare for All” and the Green New Deal are unlikely to pass.

Powell said two areas where Republicans and Democrats could potentially be more successful reaching a bipartisan agreement are infrastructure and criminal justice. However, those will likely take a back seat to pandemic-related goals.

Outside of reconciliation, Biden can use executive action to push through some of his stated priorities on COVID-19 assistance, immigration and racial equity. The president has already signed more than 40 actions on such issues, but the power of executive orders is limited because they can be quickly undone by Biden’s successor. And ultimately, Biden will still need Congress to enact measures that can have a lasting legacy.

“Some of the things he wants to do definitely require legislation. If he wants the $1.9 trillion COVID package, he’s going to have to get Congress to pass it,” Chafetz said. “To really follow through on a lot of his campaign promises he’s going to need help from Congress.”