Nearly one in three Americans have been personally affected by an extreme weather event in the last two years, according to a new poll from the PBS NewsHour, NPR and Marist. Those types of events — think hurricanes, floods, tornadoes and wildfires — are expected to increase in severity and frequency worldwide as the planet continues to warm due to climate change, and also affect more people in the process.

Severe weather can wipe out homes and businesses, and take a significant toll on social and economic stability. Communities of color, low-income communities and other marginalized groups are most vulnerable to those potentially devastating impacts because they are less likely to have the financial resources to “prepare for and cope with” these events, according to the 2018 National Climate Assessment.

For many, the question is not as simple as choosing to pack up and move away from a place to escape the threat of extreme weather, or the devastation left in its wake. It’s also true that every part of the country will continue to be affected by climate change to varying degrees. Some people view that reality as an indication that there’s no point in trying to avoid areas that are already seeing those dramatic effects on a regular basis. 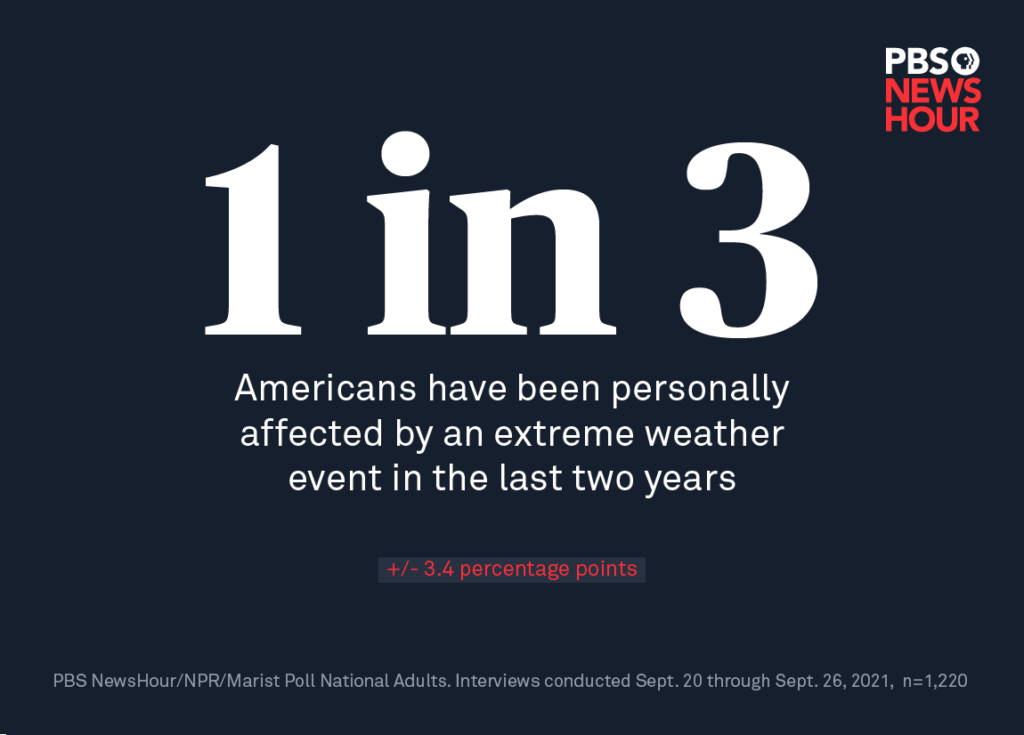 Twenty-nine percent may sound like a relatively small portion of the population. But the devastating impacts of extreme weather events are far-reaching, and often come with an enormous price tag. A record-breaking 22 billion-dollar weather and climate disasters occurred in the United States in 2020, costing the country a total of $95 billion in damages, according to the National Centers for Environmental Information.

While most Americans report not having directly experienced an extreme weather event within the last few years, research suggests that a vast majority of people are on the same page about what’s fueling them.

A poll published Monday by Monmouth University found that three in four Americans believe that global climate change is causing more extreme weather patterns, as well as sea level rise — an established scientific fact that some people continue to doubt or deny. More than half — 56 percent — characterized climate change as a “very serious” issue, with strong political divides: 85 percent of Democrats and 56 percent of independents agreed with that statement, compared to 21 percent of Republicans.

“Increasingly [in our polling,] the Republican respondents either think [climate change is] not a serious problem, and they certainly do not think that the government should be taking more action to address it,” said Tony MacDonald, director of the Monmouth University Urban Coast Institute.

It may seem intuitive to assume that the threat — or the direct experience — of losing your home to a wildfire or a flood is enough to significantly influence which places you’d want to live, and which you’d rather avoid. But the reality is rarely so straightforward.

For those who have endured such a disaster, the choice of what to do next is informed by myriad questions, including whether they have the resources to stay and rebuild in the first place, said Gabrielle Wong-Parodi, an assistant professor in the Department of Earth System Science at Stanford University. 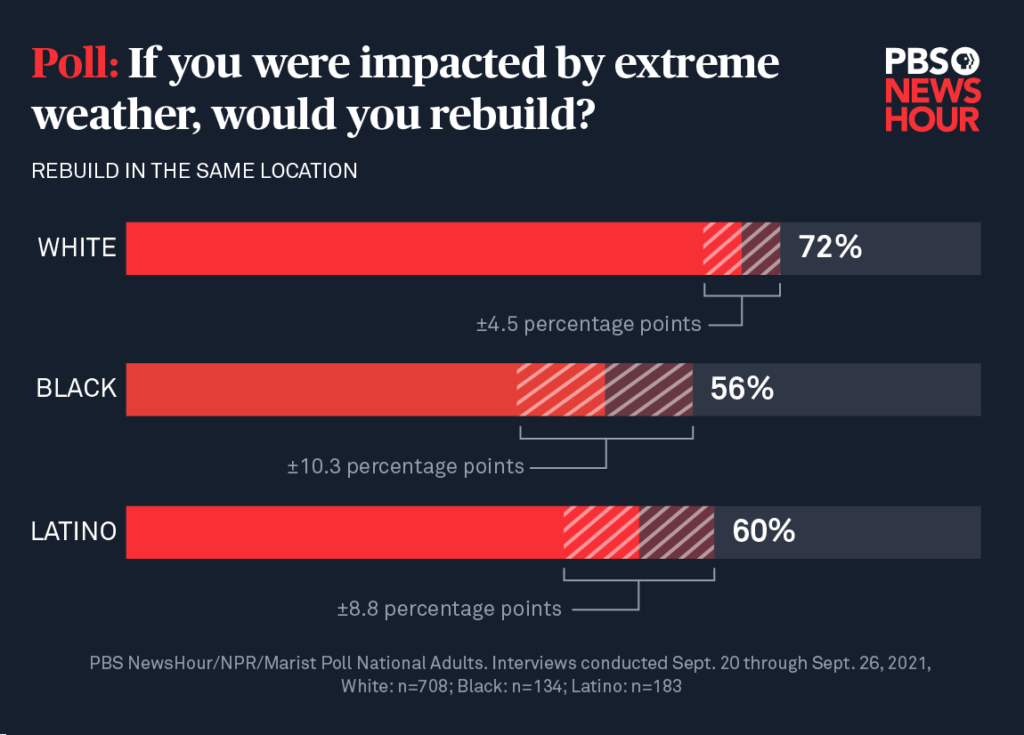 “Persons of color tend to hold higher perceived risks in the face of these types of events,” which may have to do with resources, i.e. personal wealth, Wong-Parodi said.

In the United States, a significant racial wealth gap has persisted for centuries as a direct and intended result of systemic racism.

“The typical white family has eight times the wealth of the typical Black family and five times the wealth of the typical Hispanic family,” an analysis of 2019 data by the Federal Reserve found. Those numbers, drawn from the 2019 Survey of Consumer Finances, do not account for the coronavirus pandemic, which has taken a disproportionate economic toll on Black and Latino people in the U.S.

After Hurricane Sandy devastated New Jersey in 2012, those who chose to stay and rebuild “tended to be more affluent, [white] individuals,” Wong-Parodi said.

Wealthier people tend to have more resources available to them, which means they may be less likely to feel the need to move or change their lifestyles even if they know they’re at risk of experiencing a severe weather event, MacDonald said. The same logic could extend for those who have actually been affected by a disaster and are deciding what to do next. More resources means more options. In this poll, people whose household income was $50,000 or more were slightly more likely than those making less than $50,000 to say they would rebuild (68 percent versus 65 percent).

When it comes to generational divides, multiple experts pointed to the increased mobility associated with youth compared to older age. Younger people may feel more equipped to reevaluate their options in terms of where to live compared to those who have been rooted in a community for years or even decades.

“Younger people are just going to be more mobile and able to move, whereas older people may have a home, they’re more deeply entrenched in their communities, there’s probably a stronger place attachment and physically what they’re able to do — there’s just more to lose if they have to pick up and go,” Wong-Parodi said.

And for those who have experienced a severe weather event, those community ties can outweigh concerns about something bad happening again.

“Americans who have been impacted [by extreme weather events] have very similar attitudes about their neighborhoods — whether they would rebuild, whether they were likely to stay where they are — than Americans who hadn’t,” said Barbara Carvalho, director of the Marist Poll.

Wong-Parodi echoed that sentiment. People tend to experience “strong place attachment,” she said, and it’s not easy to leave everyone and everything you know behind.

Rudy Lopez, a resident of Los Angeles, said that the term “extreme weather” for him summons far-away images of hurricanes and flooding more so than the seasonal wildfires that occur in his own state.

Lopez said that brush fires have ignited in the hills near his home over the years, but that the city is typically fairly quick to put those out. His location doesn’t typically make him feel at immediate risk of being in the path of the larger fires that tend to burn farther outside the city. And though air quality from wildfire smoke is a long-term health concern, Wong-Parodi noted that not all people would see that as a reason to leave.

“This is home. It’s been home now for a little bit over five years, and this is where home will continue to be, God willing,” Lopez said. “So if something — and God forbid — were to happen, I think I would [rebuild].”

Where extreme weather hits the hardest 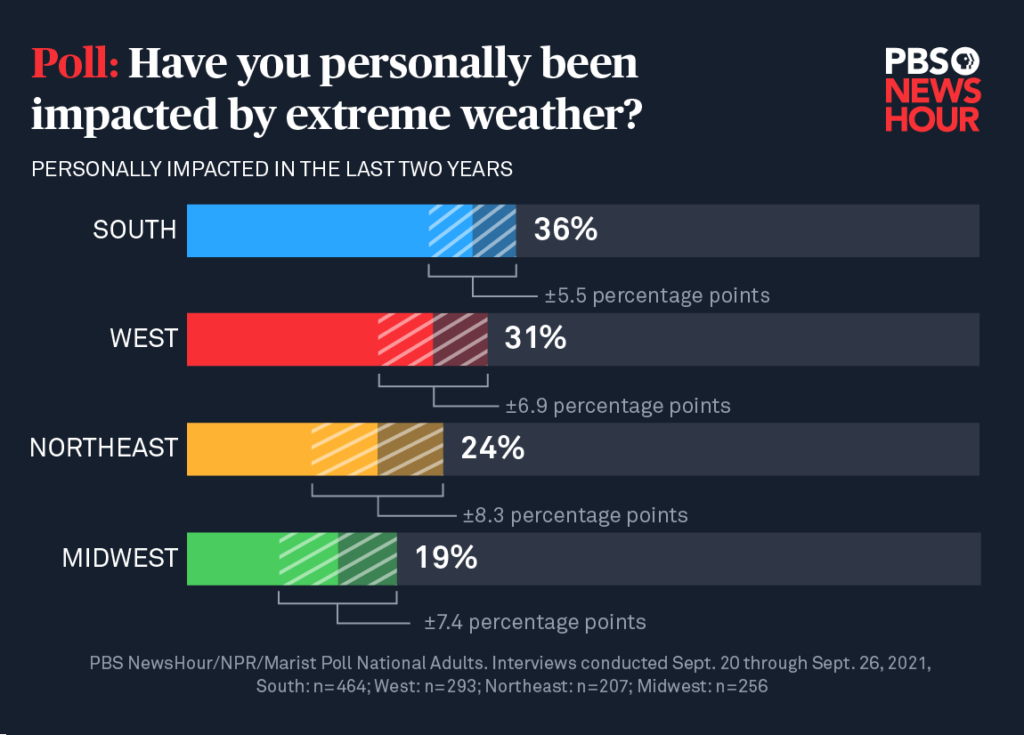 There are several different types of severe weather events, from the highly unusual blizzard that gripped Texas in February, to wildfires and hurricanes that occur every year but have grown more destructive and more frequent. All of the above can have devastating impacts on communities.

Though people who live in the South or West are more likely to say they have been impacted by extreme weather events in recent months, those responses don’t necessarily correlate with willingness to move elsewhere after that event.

In fact, 16 percent of people overall said they were likely or very likely to move to an area that has seen impacts from severe weather. Poll respondent Kristi Barnwell, who lives in Illinois, said she’s aware that these events are expected to become more frequent, which in her view means that they’re “going to affect most of us at some point or another.”

“There are increasingly extreme weather events, so I don’t think that it’s becoming a concern that would prevent me from moving somewhere,” Barnwell added.

No matter where they live, a majority of Americans accept the widespread reach of climate change, a significant contributing factor to extreme weather.

Fifty-six percent of both inland and coastal residents reported considering climate change to be a “very serious problem” in Monmouth’s Oct. 4 poll. Compared to polling from three years ago, the proportion of inland residents who gave that response has risen 12 points, from 44 percent. The share of coastal residents who felt that way has shrunk in that time, but less dramatically by 5 points.

“Now [there] does seem to be more of a sense that this is a national issue,” MacDonald noted. “So it really is impacting everybody — not only coastal flooding, but also inland flooding and fires.”

That sense of inevitability and universal vulnerability point to the importance of making sure people have the support they need to recover from disasters, and ideally become more resilient in the process.

“We’re going to have to help people adapt and cope with the extremes that they experience in place,” Wong-Parodi said. “Because these events are happening, they’re going to increase and more people are going to be affected.”

Left: A couple in Montecito, California, comfort each other as the 2017 Thomas fire burns in the background. File photo by Mel Melcon/Los Angeles Times via Getty Images