2 years in, Perseverance has given us these clues about Mars

Nearly two years since the Mars 2020 mission first launched, the robot astrobiologist known as Perseverance has given us a novel and sometimes surprising look at the Red Planet.

Outfitted with a wealth of scientific instruments and cameras, it’s captured a whopping number of images – more than 282,000 so far – and recorded humanity’s very first audio recordings on Mars, which, in addition to adding a new sensory element to our remote exploration of the planet, helps scientists better understand its atmosphere.

To the untrained eye, our planetary neighbor’s barren, dusty terrain may not exactly look like a wealth of scientifically invaluable information. But just like the geology here on Earth, the rocks on Mars keep a record of what they’ve been exposed to across millennia. The search for biosignatures – possible hints of past life within those rocks – is integral to Perseverance’s mission.

Perseverance’s turret, halfway through sampling the second core from the rock Sid this March. Credits: NASA/JPL-Caltech.

The rover spent the first part of its journey traversing the crater’s floor, where it picked up eight rock samples. Researchers intend to transport them to Earth in an unprecedented, complicated mission that could take place in the early 2030s, using a special isolation system to ensure that they don’t jeopardize life here at home.

Before then, more work awaits. The sights and sounds collected by Perseverance so far can help us understand what the rover will pursue next, and why that’s important to its search for ancient life.

Here’s a look at how this mission is using geology to answer questions about our solar system.

How rocks help us keep time 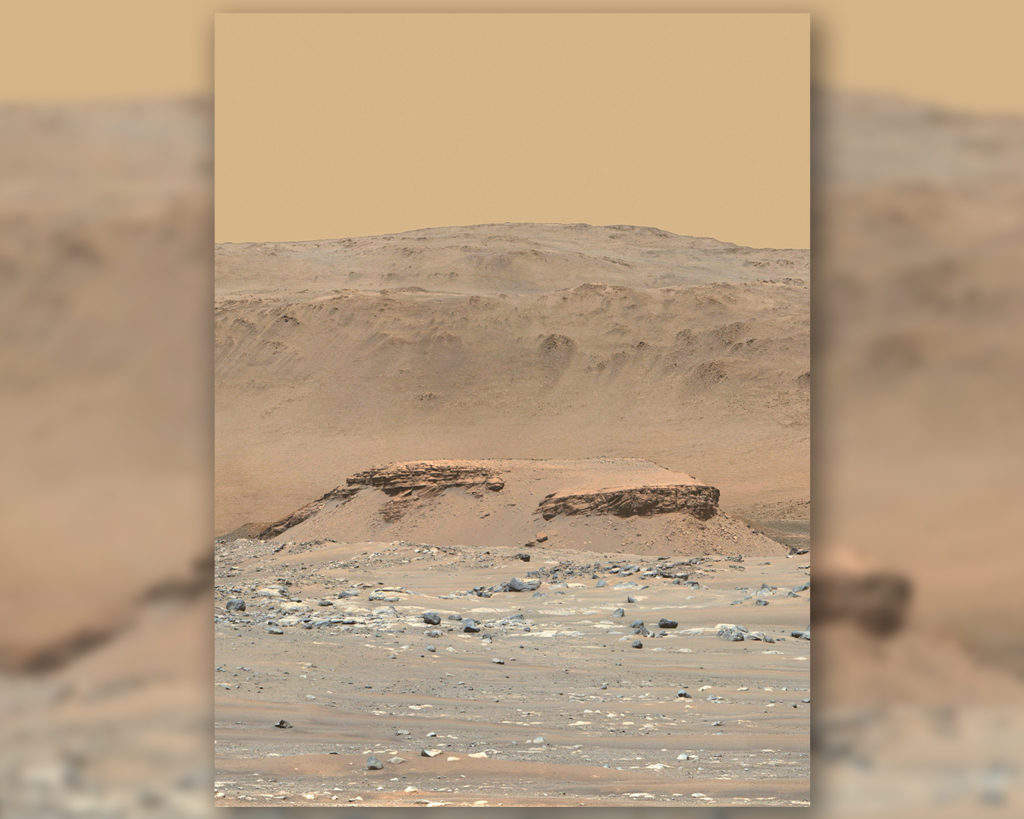 This enhanced color image was acquired by the Mastcam-Z instrument aboard NASA’s Perseverance Mars rover on April 18, 2021 (sol 57). Kodiak, the prominent layered mound, stands approximately 2 km from the rover and is a remnant of the ancient Jezero delta. Credits: NASA/JPL-Caltech/ASU/MSSS

Through Perseverance, scientists are parsing the history of a heavily eroded river delta inside Jezero crater, which dates back around 4 billion years to an asteroid collision. They already know the crater was once the site of a standing lake, fed by a river that deposited sediment and rocks.

Chemical or physical clues of long-gone life, also called biosignatures, are most likely to have been preserved in the sedimentary rocks that make up Jezero’s delta, if they exist at all.

A tale of two deltas

Deltas are valuable collections of physical material here on Earth, too. If you explore the area where the nearly 2,500 mile-long Mississippi River meets the Gulf of Mexico, you might find a piece of Minnesota landscape that traveled across the country with the current.

On both planets, whether actively aquatic or long dried up, “deltas are good amalgamations of material from a fairly wide watershed,” said Mitch Schulte, a Perseverance program scientist at NASA headquarters. With the right scientific instruments to decode that material, researchers can help piece together what Mars’ Jezero Crater and its delta were like when water flowed.

They’re the type of rock that “often represent environments that we think ancient life, if it existed on Mars, might have liked to be in,” said Katie Stack Morgan, deputy project scientist with the Mars 2020 mission. That’s because in the delta environment, they would have been exposed to liquid water, which — as far as we know — is required in order for life on any planet to thrive.

But there was a surprise for researchers when Perseverance began to explore the area. Anticipating that the floor of Jezero crater would be littered with sedimentary rocks — which are accumulations of pre-existing rocks or, on Earth, long-dead organisms — they instead discovered igneous rocks, which form when molten rock solidifies. That means it’s likely that the crater was once filled with lava, which they did not expect.

Since all of the rock samples collected so far are igneous, they don’t quite boast the same potential for astrobiological discovery, Stack Morgan said. But they’re still useful. Igneous rocks are excellent timekeepers — researchers have used them to collect geologic timescales on Earth and the moon — and right now, our current understanding of Mars’ geologic time scale is fairly fuzzy, Stack Morgan noted. If the core samples Perseverance has collected successfully make it to Earth one day, scientists will be able to use them to pin major geologic events across Martian history “onto an actual geologic time scale with real dates.” 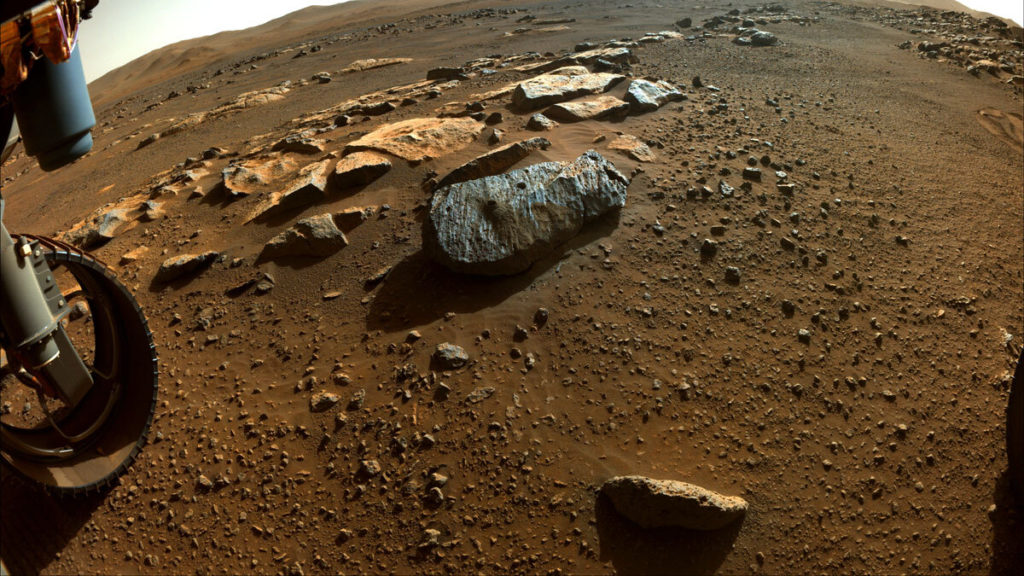 Perseverance is guaranteed to come across sedimentary rocks in the river delta, so the surprise discovery of igneous rocks on the crater floor is actually a major win for the mission.

“You can learn a lot of exciting things from sedimentary rocks or all igneous rocks,” Stack Morgan said. “But having both of those rocks is really what we want because they each tell you something different and special.”

Searching for evidence of ancient life

Stromatolites — layered rock structures formed by microorganisms that trapped, bound and cemented sediments — are some of the earliest evidence of biological activity on Earth, said Mitch Schulte, a Perseverance program scientist at NASA headquarters. Over time, those layers built up and turned into rock, preserving them as geological evidence researchers can now analyze billions of years later. 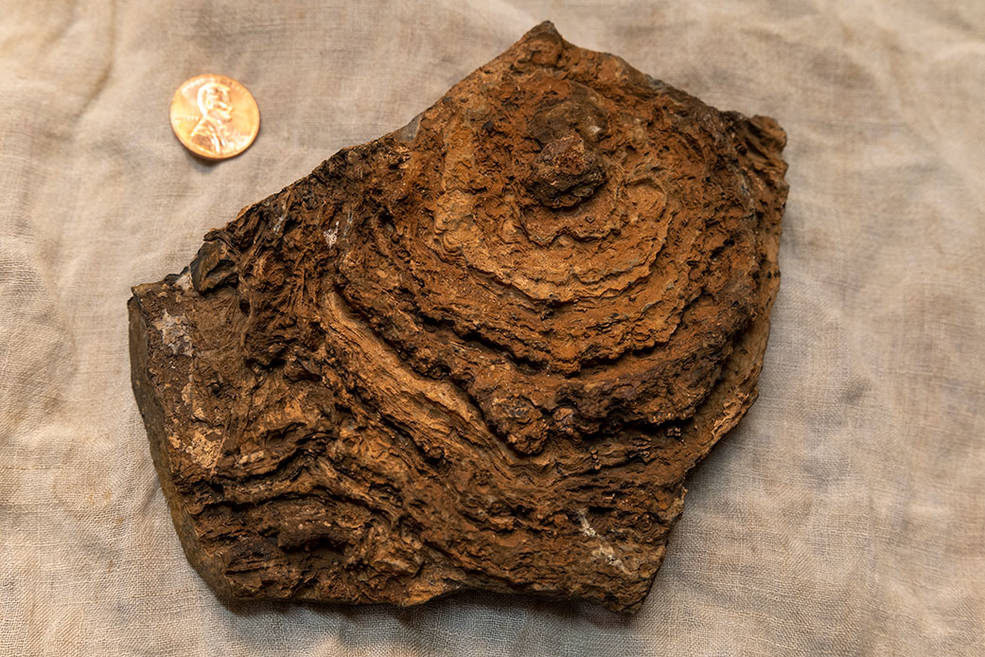 This image shows the finely layered internal structure of a stromatolite from the Pilbara Craton in Western Australia. Credits: NASA/JPL-Caltech

On Mars, it’s possible Perseverance could come across a visual cue akin to stromatolite that points toward the existence of ancient life. But such a discovery would take time to confirm since some strictly geological processes can visually mimic biological ones, Schulte added.

The rover identifies ideal rock samples by using instruments on its arms, including two dubbed PIXL and SHERLOC. It scratches the surface of an intriguing rock and removes dust and debris so it can identify what exactly it’s made of and whether it warrants further investigation.

“Looking at that fresh rock is really what our instruments on the rover’s arm were meant to do,” said Katie Stack Morgan, deputy project scientist with the Mars 2020 mission. “That way we can get rid of the dust, get rid of the coating, and actually see what those rocks are.”

Perseverance is equipped with a range of bells and whistles designed to identify the chemical composition of its observations. Finding organics, the molecules that are the elemental building blocks of life as we know it, would be another potential sign of ancient life, and one which Perseverance is capable of detecting. (Stack Morgan offered the acronym CHNOPS, which stands for carbon, hydrogen, nitrogen, oxygen, phosphorus and sulfur, as a way of remembering the elements.)

Stack Morgan said her team believes the rover has detected several different types of simple organics within the igneous rocks that it’s collected so far that are consistent with ones that other missions, including the Curiosity rover, have observed.

She emphasizes that we can’t yet know whether these organics are biological in origin — they could have rained down on Mars via meteors of various origins — and that the bar is “very high” to make a definitive declaration about ancient life on Mars. That’s why she’s excited about the potential of the sample return mission, because only then will such a conclusion become a possibility.

“We have organics, and when those samples come back to Earth, we can actually definitively — we hope — make a statement about whether that involved life or not,” Stack Morgan said.

Getting pieces of Mars to Earth

Right now, Perseverance is carrying a total of 10 sealed tubes. Eight of those contain rock samples, one contains an atmospheric sample and one is a “witness” tube that was sealed back when the rover was still on Earth to serve as a control sample within its caching system.

That atmospheric sample was somewhat of a disaster-turned-happy accident for researchers. When they began to sample the very first rock core of Perseverance’s mission, the tube came up empty. Researchers were briefly panicked by what Stack Morgan dubbed “the case of the missing sample” as they scrambled to figure out what went wrong, and feared what the outcome could imply for the rest of the mission.

But they eventually discovered that the inaugural rock wasn’t the kind the system was designed to drill, and had been pulverized during that process. The team was able to seal up that empty tube as its first atmospheric sample, and drilling other rocks has been smooth ever since. 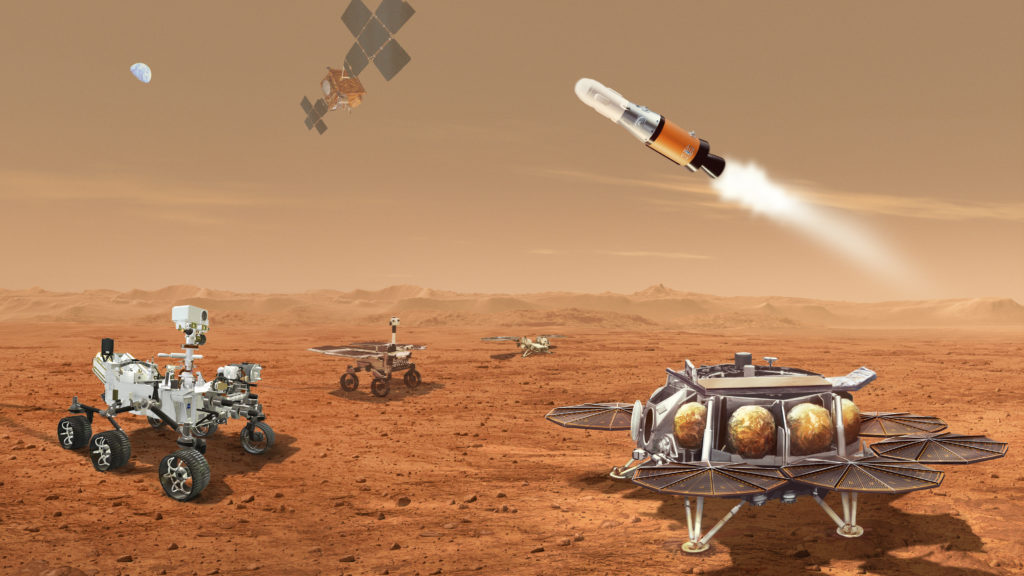 This illustration shows a concept for multiple robots that would team up to ferry to Earth samples collected from the Mars surface by NASA’s Mars Perseverance rover. Credit: NASA/ESA/JPL-Caltech

Perseverance collects double samples, which means it takes two cores from each rock, in anticipation of a return mission. But that mission has yet to be detailed and is also years away. It’s possible that the rover could place its samples on the Martian surface so that another mission could come retrieve them. Or it could hold on to them and eventually hand them off to the lander tasked with bringing the samples to Earth. Taking two samples at a time, Stack Morgan said, keeps their options open for that future return mission.

For now, researchers are focusing on delving into the new delta science campaign and the new discoveries that await Perseverance there.

Left: In the latest leg of its Mars mission, the Perseverance rover is tasked with exploring what once was a river delta within the Jezero crater. In this image taken on April 19 (or Sol 413) using one of the rover's many cameras, a delta remnant known as Kodiak looms in the background. On its journey, Perseverance picked up a pet rock along the way, which now resides on its front left wheel. Image courtesy NASA/JPL-Caltech