How a snail’s shell gets its twist

Symmetry is a feature of many plants, animals and even some molecules — like water. But that’s not the case with snails and their coiled shells.

They are chiral — asymmetrical in such a way that they can’t be superimposed on mirror images of themselves. Golf clubs have chirality, as do scissors and shoes. There are clubs and scissors made for right-handed and left-handed people, and good luck walking with a left shoe on your right foot.

According to a study published Tuesday in Development, this fundamental spiral is all down to one gene.

“There aren’t many phenotypes you can just put your finger on,” said Reiko Kuroda, a chemist and developmental biologist from Chubu University in Japan who is the study’s senior author.

Most characteristics in living things are based on a slate of genes, like the 10 or more genes that affect a person’s eye color, or the hundreds of genes that each contribute to a person’s height. In this rare case, a single gene affects a single protein, which changes the way the cells grow their structure and eventually affects the shape of the entire snail, inside and out.

Moreover, her team found a snail’s chiral nature starts from its earliest moment as a single cell.

Great pond snails — Lymnaea stagnalis — grow almost as big as a golf ball. Nearly all of them feature right-handed bodies and shells, but about 2 percent of the population spirals the other way.

That twist has fascinated researchers back to the Victorian age, said Kuroda. In 2016, she and her team proposed that a single gene — known as Lsdia1 — was likely related to snail chirality, but she didn’t feel that the question was fully settled. Even with the earlier study, there was still a chance that the true “handedness” gene was simply located near Lsdia1 on the snail chromosomes. 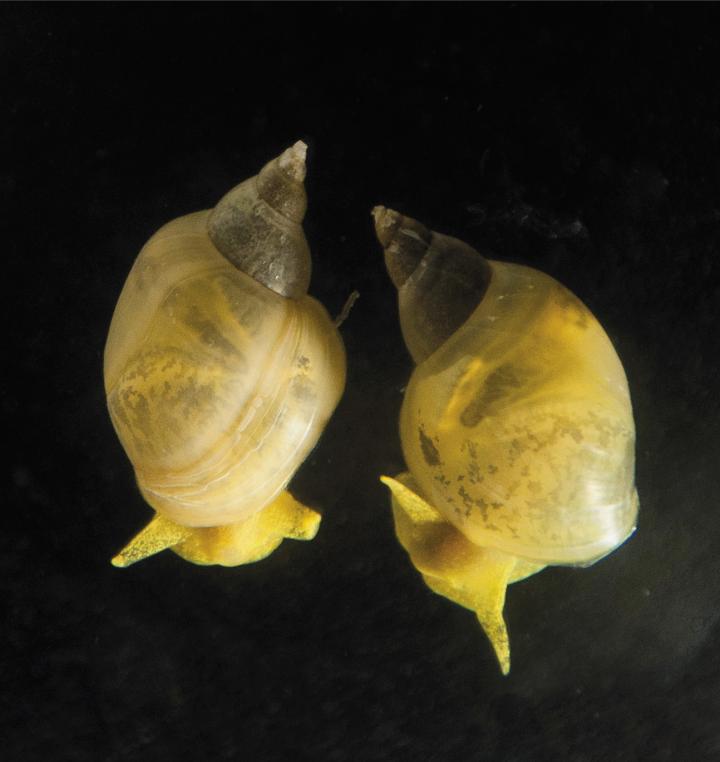 Just one gene in these snails controls whether their shells — and the rest of their bodies — coil to the left or the right. Image by Hiromi Takahashi via dev.biologists.com

With the 2015 discovery of CRISPR, a gene-editing tool that can accurately snip out sequences of DNA, Kuroda realized that she and her team could “knock out” Lsdia1 and see if its absence could create mirror-image snails.

Under a microscope, the researchers injected snail eggs with CRISPR, which worked as a molecular pair of scissors, seeking out and removing just the copies of Lsdia1 from the snail’s genes. Recent work with CRISPR technology has revealed that it can have off-target effects, cutting into genetic material that researchers didn’t intend to alter, but in this case the researchers reported no evidence that any gene but Lsdia1 was harmed. As proof of its accuracy, the team checked another very similar gene — Lsdia2 — and found it intact.

They told me, maybe it’s a good time for you to retire and take it easy. I said, “No, thank you.”

That’s important because Lsdia1 and Lsdia2 both act as genetic blueprints for two versions of a protein called formin.

Formin helps assemble tiny strands of actin, another protein that’s crucial to engineering the basic structure of life. Actin is the most abundant protein in most animal and plant cells.

The formin sits at the top of each actin strand — a filament — and helps them grow, said cell biologist Tim Mitchison of Harvard Medical School, who was not involved in this study.

“You can think of it as a molecular dance,” Mitchison said. As a formin builds actin filaments, the filaments spread out in a cell, pushing against its sides and propping up our bodies’ 3-D shape. Aside from forming our cells’ internal structure, actin filaments aid the contractions of muscle and non-muscle tissue.

After CRISPR chopped out Lsdia1, a developing snail had to rely entirely on the slightly altered formins encoded by Lsdia2 to build vital actin fibers. And in the absence of Lsdia1, the team found whole generations of snails developed left-handed shells — a trait rarely seen in nature. The researchers concluded that Lsdia1 must have been the gene responsible for giving snails their more typical right-handed twist. 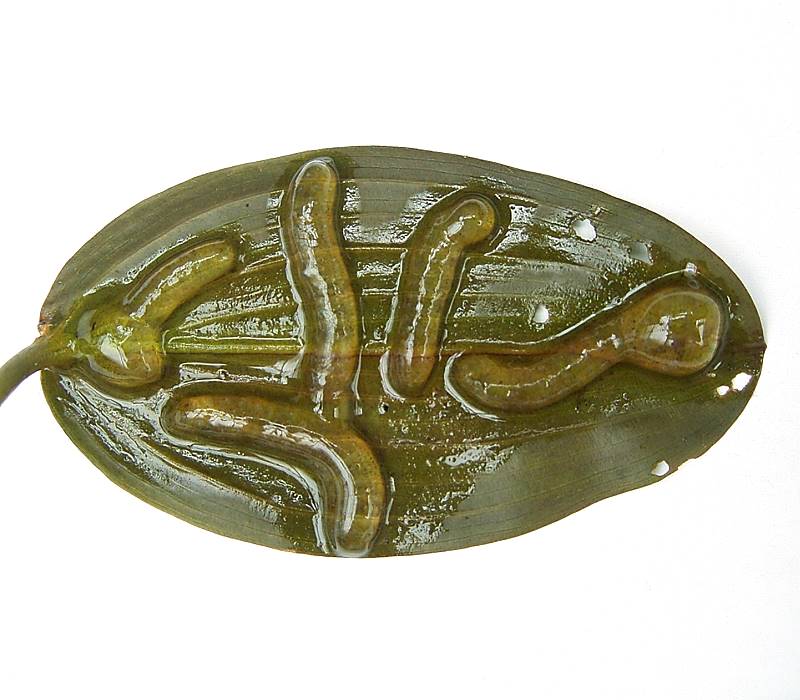 By the time these snail eggs are a single cell each, their mother’s genes have already determined whether they will be right- or left-handed. Image by Frank Vincentz/Wikimedia

Then, they delved a little deeper into the development of left-handed snails, looking at the growth of their offspring.

That’s because snails actually develop their twist based on their mother’s genes — the genes that formed the egg from which they grow. By the time that a single egg cell is fertilized and begins to split into two, a snail’s right- or left-handed fate is decided.

Kuroda could actually see the beginnings of asymmetry from the single-cell stage.

Chirality is abundant in the microscopic world of molecules. Amino acids are all left-handed when they serve as the building blocks of life on Earth, yet out in the cosmos, they’re both right- and left-handed. The artificial sweetener aspartame in your diet soda is always left-handed, while its mirror image is tasteless.

Kuroda’s work links a single gene to an entire body plan, demonstrating how chirality can stretch from the atomic scale of molecules to the visible, tangible world of a snail.

“It’s sort of a lovely problem in biology,” Mitchison said. “It’s not going to cure cancer or save the rainforest. It’s one of those curiosity problems for its own sake, although you never know — there could be medical applications, too.”

Mitchison studies the way that cell structure — namely a molecule similar to actin called a microtubule — affects human health. Some types of chemotherapy, for example, work to stabilize or destabilize microtubules. Inflammatory diseases like gout are linked to an overabundance of microtubules, and neurodegenerative diseases like ALS and Alzheimer’s feature missing microtubules in nerve cells. Given that, he’s charmed by the idea of research undertaken for its own sake in order to answer a fundamental biological question.

“What Kuroda is really looking for is a way that the chirality of building blocks gets amplified up into the chirality of the organism,” Mitchison said. “These snails have a wonderful story to tell us.”

Kuroda began her research career as an X-ray crystallographer, a chemist who studied the way proteins and other molecules fit their atoms together. Although her current research deals with sticky snails rather than the elegant images produced in X-ray diffraction, she’s still fascinated with the way billions of molecules gather to form crystals, DNA, proteins and eventually living creatures.

In Japan, where she does her work, Kuroda is just past the country’s mandatory retirement age. But, she said, she still has too much left to do.

According to Kuroda, “They told me, maybe it’s a good time for you to retire and take it easy. I said, ‘No, thank you.’”

Instead, she’s moved her equipment and her colony of snails (which she transported via bullet train) to a new lab.

Left: Gene-editing with CRISPR reveals why snail shells are asymmetrical and coil either left or right. Image by Sultan/Adobe