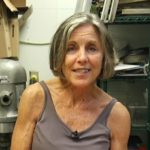 During a recent visit to the Birchwood Cafe in Minneapolis, chef and author Beth Dooley showed PBS NewsHour Weekend how to cook Kernza pancakes.

The cafe, a local institution known for its commitment to local and sustainable ingredients, was one of the first restaurants to start cooking with Kernza, an experimental grain similar to wheat. Twin Cities chef and author Beth Dooley helped Birchwood develop its Kernza recipes and co-authored the “Birchwood Cafe Cookbook.”

Future of Food: How a new grain could help combat climate change

So, what is Kernza? As we’ve been reporting in our “Future of Food” series, most of the plants that we eat are annuals, which die in the fall and are then replanted the next year. And that process has a host of negative impacts on the environment. Tilling the soil to prepare it for seeding can damage the land and release carbon dioxide into the atmosphere. And after plants die in the fall, cropland often has nothing growing on it for months, which can lead to erosion and water contamination. 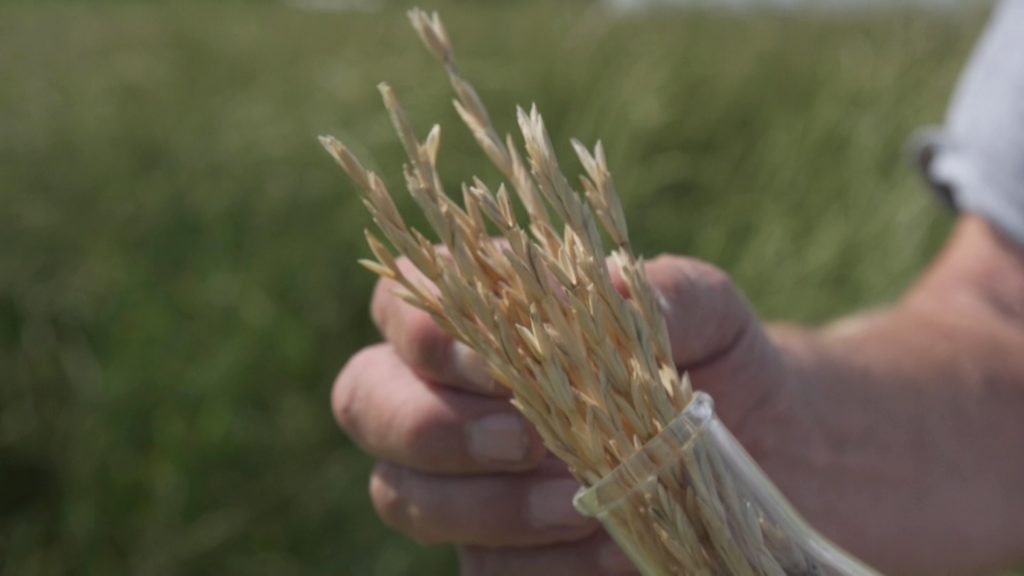 Kerza, a greener alternative to wheat, in its raw form. Photo by PBS NewsHour Weekend.

Back in the 1980’s, scientists at The Land Institute in Kansas started to develop a perennial grain, genetically similar to wheat, that is now known as “Kernza.” It’s a tall version of intermediate wheatgrass that can live for more than a decade.

Kernza has extremely long roots, which stay in the ground for years, helping trap carbon dioxide and protecting soil health and water quality. Kernza can also provide wildlife habitat. And farmers can get a lot of bang for their buck because it’s a “dual use” crop: cattle can forage it in the spring before the grain is harvested later in the fall. 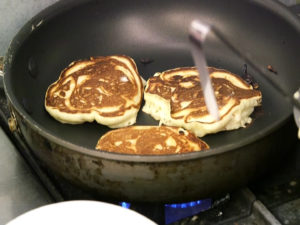 Beth Dooley whips up a batch of Kerza pancakes, a recipe from her book, “the Birchwood Cafe Cookbook.” Photo by by PBS NewsHour Weekend.

Proponents now want to make Kernza a mainstream, commercially viable grain. But there are a lot of hurdles. Compared to annual wheat, Kernza’s seeds are tiny and the plant’s overall yields are about 75 percent less. And those yields tend to drop off after about three years.

Scientists at the University of Minnesota, which has one of the largest Kernza research programs, are hard at work selectively breeding the plant to solve some of the issues. And the University’s “Forever Green Initiative” is getting food producers big (like General Mills) and small (like Birchwood), interested — ensuring that when, or if, Kernza ever hits the big-time, there will be a market for farmers to sell to.

About five years ago, a University of Minnesota researcher dropped off a 50-pound bag of Kernza and Birchwood’s chefs and bakers started experimenting. It’s high in protein and antioxidants. But its gluten content is lower than traditional wheat, so bread baked with Kernza flour, for instance, doesn’t rise quite as high. Today Birchwood uses Kernza in everything from crackers to tortillas, desserts (in a puffed form) and in pancakes.

Left: During a recent visit to the Birchwood Cafe in Minneapolis, chef and author Beth Dooley showed PBS NewsHour Weekend how to cook Kernza pancakes. The cafe, a local institution known for its commitment to local and sustainable ingredients, was one of the first restaurants to start cooking with Kernza, an experimental grain similar to wheat that is easier on the environment to grow.

Melanie Saltzman reports, shoots and produces stories for PBS NewsHour Weekend on a wide range of issues including public health, the environment and international affairs. In 2017 she produced two stories for NewsHour’s “America Addicted” series on the opioid epidemic, traveled to the Marshall Islands to report on climate change, and went to Kenya and Tanzania to focus on solutions-based reporting. Melanie holds a BA from New York University and an MA in Journalism from Northwestern University, where she was a McCormick National Security Fellow. In 2010, she was awarded a Fulbright scholarship in Berlin, Germany.

Beth Dooley is a Twin Cities chef and author, and co-authored the “Birchwood Cafe Cookbook.”