Blue flames, toxic gas clouds. How does Kilauea’s latest eruption compare to its past disasters?

Early Wednesday morning, officials from the U.S. Geological Survey spotted blue flames rising from cracks in a country road in Leilani Estates, near where lava is spewing from the Kīlauea volcano’s lower east rift zone. The tiny blue blazes are a result of buried vegetation catching fire and filling cracks in the road with ignitable methane.

On the heels of toxic gas clouds, which formed over the weekend as lava spilled into the ocean, the blue flames raise ideas of a Hawaii on the verge of an apocalypse. But if you take a broad view of the hazards, you’ll find a serious local disaster, but not the worst event in Kilauea’s 280,000-year history.

Kilauea’s lava is seeping from nine of the 23 fissures created since the volcano began emitting lava 20 days ago. Fissure 22, located in the neighborhood of Lanipuna Gardens, remains one of the most active. Its fountains form two main channels of lava that are flowing three miles due southeast and into the sea. This channels are now pouring into the ocean at three spots, producing a billowing haze.

The lava from other fissures is either feeding into the primary channel or pooling where it stands.

“Fissure 7 is producing the most volume of lava. It opened up very recently,” USGS volcanologist Wendy Stovall said Thursday. “There are lava flows that are going to the east from that vent, and they’re reaching about 1,300 feet away from the source.” 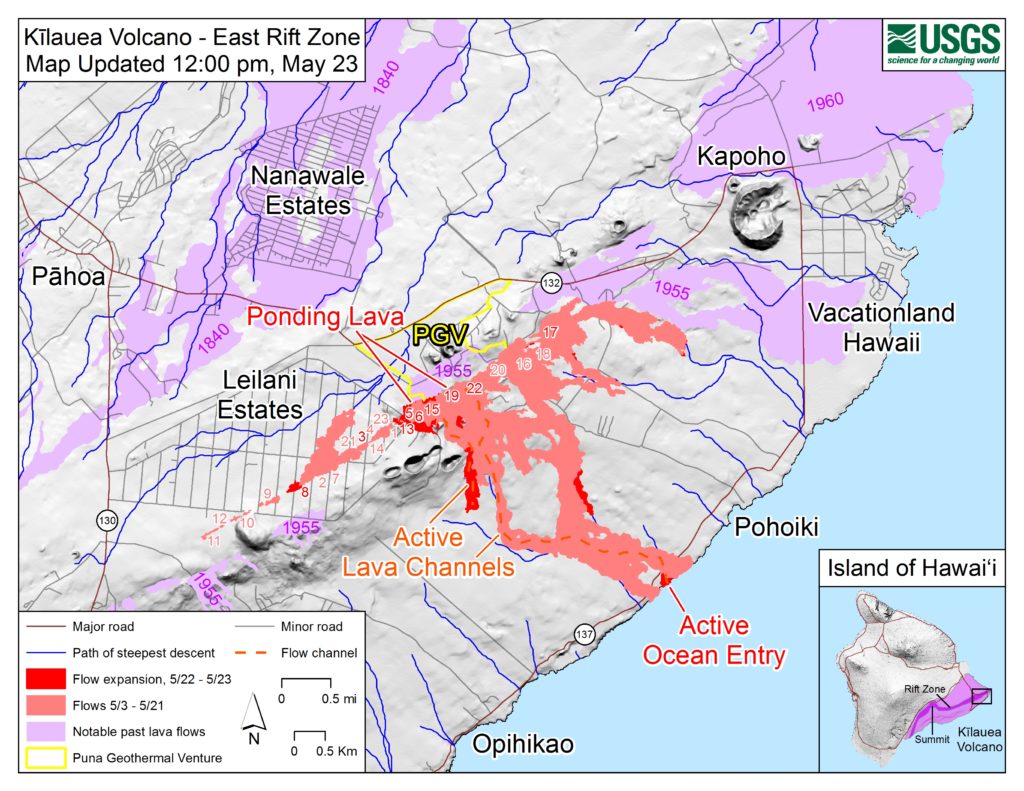 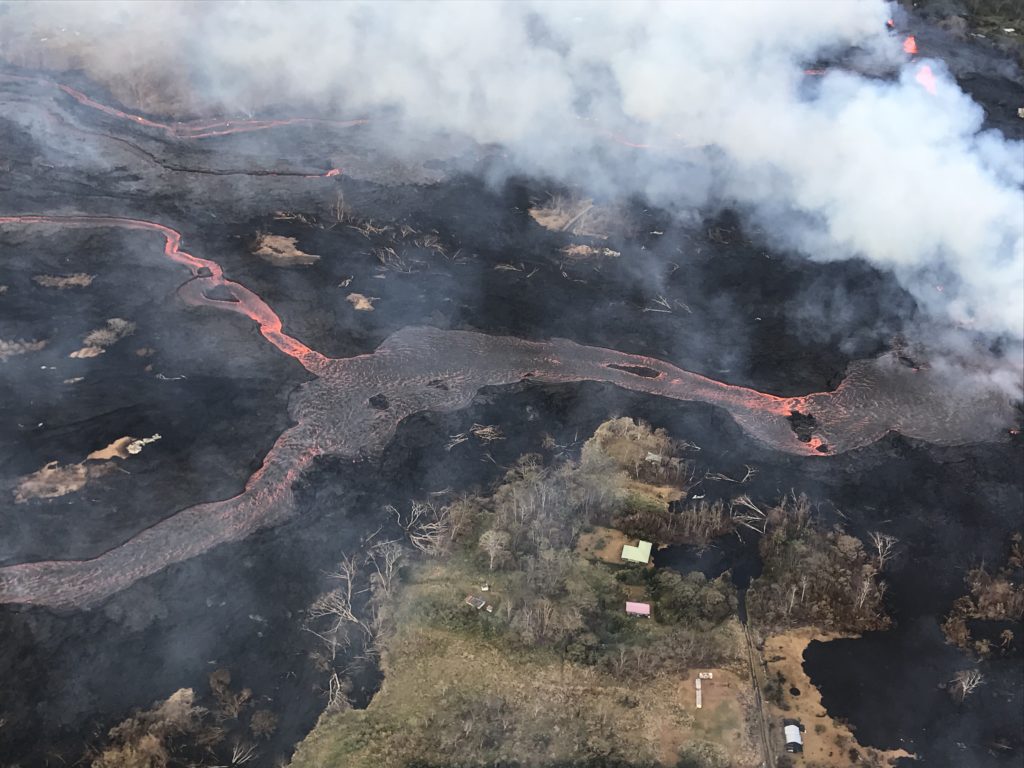 The lava channel emerging from Fissure 22 (not visible, but to the center, far right of the image). The lava is flowing downhill, from right to left in the photo. Photo by U.S. Geological Survey

Some of the pooling lava approached the Puna Geothermal Venture plant earlier this week, where it came within 1,000 feet of underground wells containing toxic hydrogen sulfide gas.

But by Wednesday, USGS officials said a wall of lava has been forming from the fissure nearest the plant, preventing molten rock from reaching the facility. Hawaii County Civil Defense announced Thursday the situation remains stable.

Despite the epic imagery, Kilauea’s recent activity is a blip when compared to its previous episodes since 1983, when the current eruption technically began. The first fissure created 44 fountains, one every three to four weeks, for more than three years. In March 1990, an 80-foot pile of lava buried a church, a store and 100 homes. This 34-year eruption has produced enough lava to cover more than 55 miles of land. 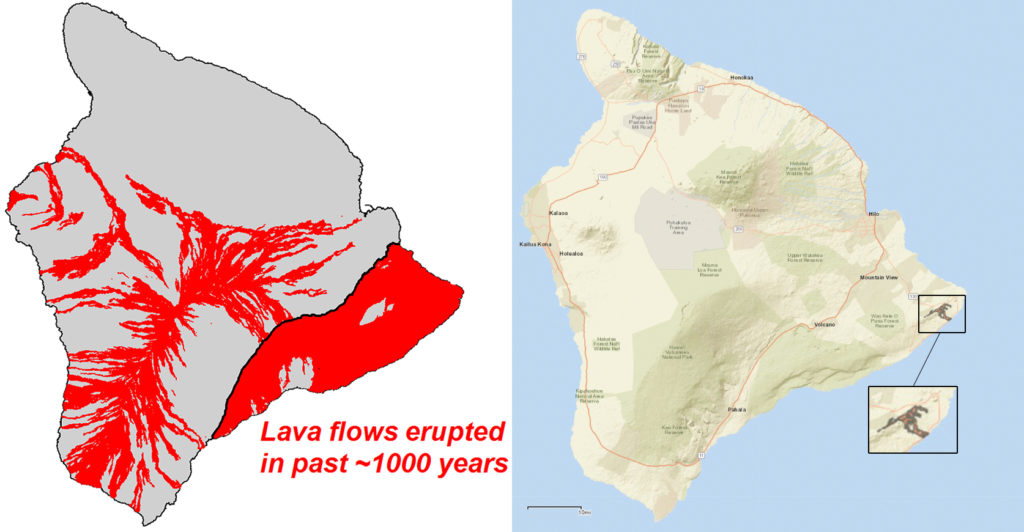 So far, this month’s lava flows have been confined to a handful of rural neighborhoods in Puna, one of the nine districts on Hawaii’s Big Island.

Puna covers as much ground as Los Angeles, but its population is much smaller, hovering around 45,000 people. Of those, about 4 percent — 2,000 residents — have been forced to evacuate. The eruption has destroyed 50 buildings, including nearly two dozen homes. 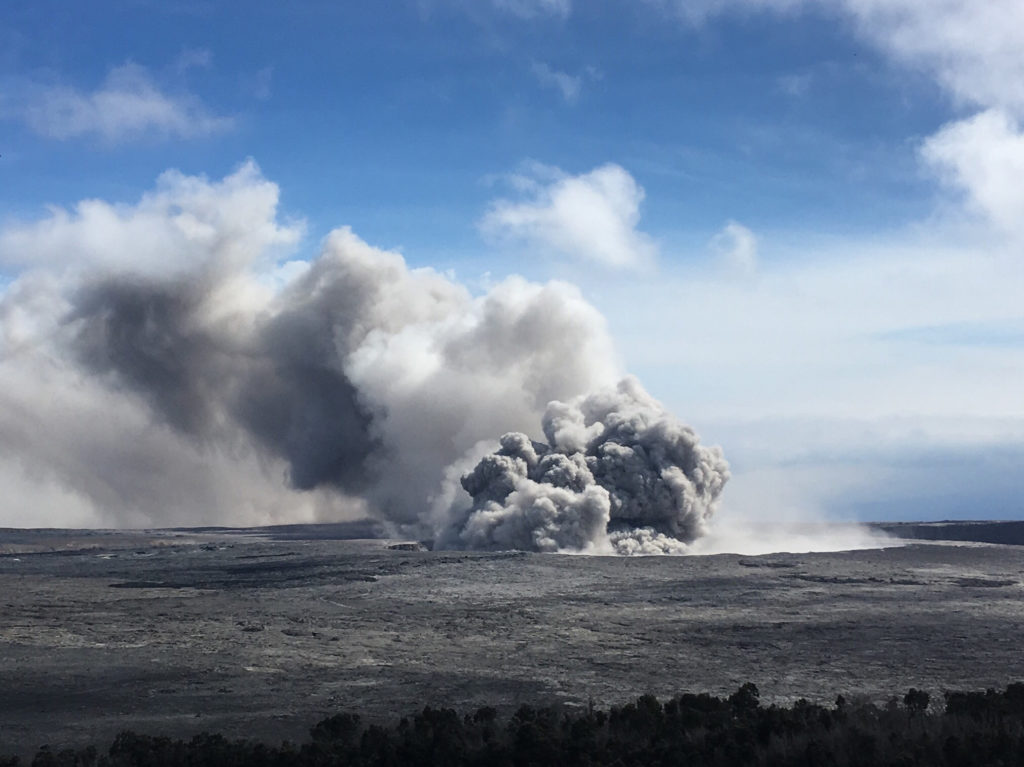 A pulse of ash rises from Halema‘uma‘u as part of semi-continuous emissions at Kīlauea’s summit on May 23. Ash can be seen falling from the plume as it is blown downwind. Photo and caption by U.S. Geological Survey

The ash, vog and the lava haze — laze — produced at the coastline represent breathing hazards for anyone unlucky enough to be standing downwind, which you can track via these vog forecasts. Emergency room visits due to respiratory issues are up 30 percent. The state officials are distributing free masks to protect against ash, but not gases or vapors.

While one man nearly lost his leg to flying lava splatter, no one has died yet in connection to the volcanic activity. Kilauea is the most lethal volcano in American history, but this reputation comes mostly from a 1790 eruption that killed 400. Historic reports and geologic remnants suggest the locals were overwhelmed by a pyroclastic blast — a surging mass of gas and volcanic rock.

Since then, Kilauea has killed 21 people. For comparison, 23 people have died due to volcanic activity at Yellowstone over approximately the same time period.

Left: A blue burning flame of methane gas was observed in the cracks on Kahukai Street. When lava buries plants and shrubs, methane gas is produced as a byproduct of burning vegetation. Methane gas can seep into subsurface voids and explode when heated emerge from cracks in the ground several feet away from the lava. When ignited, the methane produces a blue flame. Image and caption by U.S. Geological Survey