Kilauea’s lava is now spilling into the ocean. Here’s why that’s dangerous

Late Saturday, Kilauea’s lava oozed into the Pacific Ocean for the first time since the volcano began erupting on May 4. The resulting cloud prompted the U.S. Geological Survey to issue a warning for “laze,” better known as “lava haze” — the dense white plume created when the molten rock meets water. This violent collision emits a mixture of glass shards and a corrosive substance on par with battery acid, to the peril of anyone downwind.

As bad as it sounds, this poisonous haze may not be the most dangerous part of lava sliding into the ocean. The PBS NewsHour spoke with a pair of scientists about the hazards that Kilauea might pose before it finishes erupting.

Glass cement for your lungs

If you could stare into the milky plume of Kilauea’s laze, you would see lava cooling very quickly into clear glass.

“When you pick up a chunk of lava in Hawaii, it has this almost iridescent glassy sheen to it because it’s cooled into a volcanic glass. There are no crystals in it,” said Erik Klemetti, a volcanologist at Denison University in Ohio.

But the combination of hot rock and water also produces steam, which has enough force to instantly shatter the lava-based glass into miniscule shards.

Klemetti said people see these glass shards all the time, even if they don’t realize it — the shards are the main component of volcanic ash. They’re smaller than grains of sand, he said, but if you look at them under a microscope, their edges are shaped into cusps or crescents. 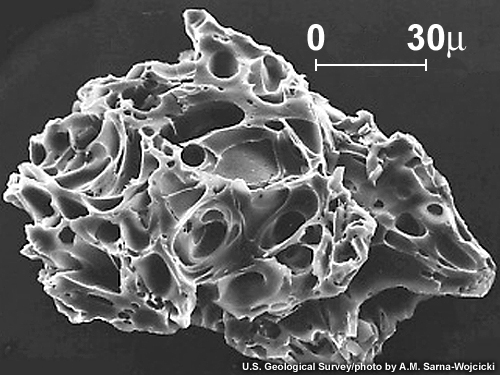 Glass shard of ash from the 1980 eruption of Mount St. Helens. Its total length is just over 0.1 millimeters. Photo by U.S. Geological Survey

This cuspate ash, as it’s called, is hazardous to humans in two ways. “One is that you’ll end up cutting the inside of your lungs,” Klemetti said. The second: “If you breathe enough of it, then it forms like a cement in your lungs as well because it’s mixing with all the moisture.”

That’s why so many people die of asphyxiation in giant eruptions of ash, such as with Mount St. Helens in 1980.

These glass shards can also pile up near the coastline, posing a risk to wildlife and beach walkers, but they tend to settle out quickly, Klemetti said.

The laze’s second aerial threat comes in the form of a mist made of hydrochloric acid.

“The lava is so hot that it is boiling the ocean water completely dry,” said Michael Poland, a geophysicist with USGS. “So even the solids in ocean water like salt — sodium chloride — are incorporated into the chemistry of the plume.” 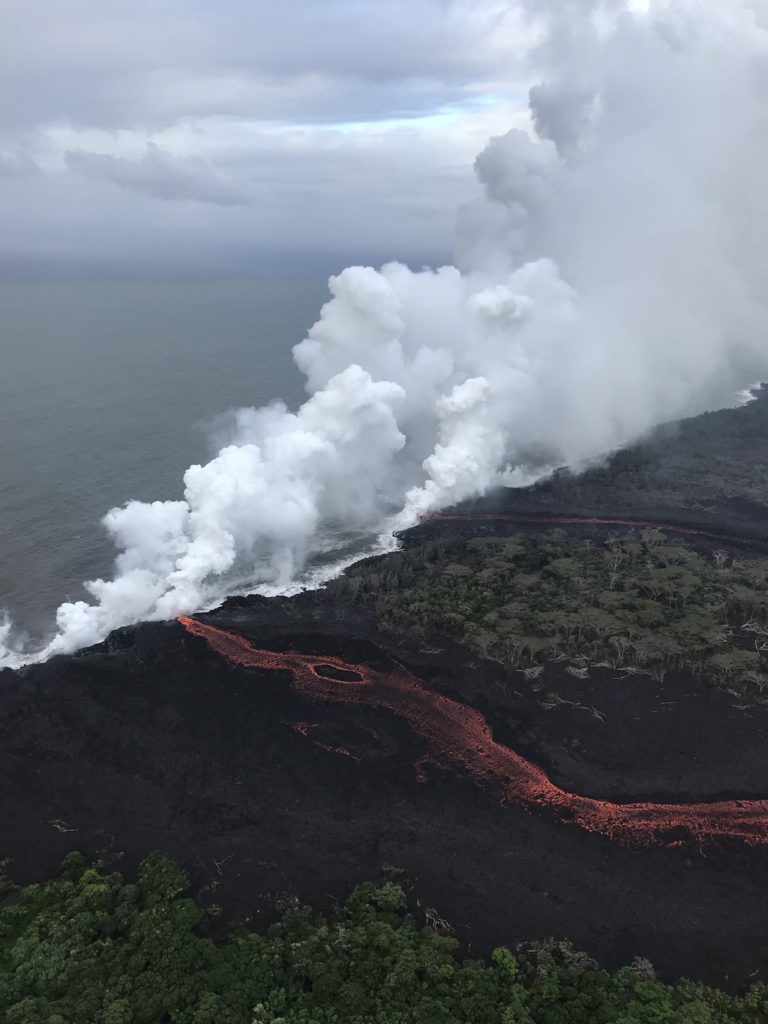 Lava continued to enter the sea at two locations on the morning of May 21, 2018. The wind was blowing the “laze” plumes along the shoreline toward the southwest. Photo by U.S. Geological Survey

Some of this airborne table salt reacts chemically with hydrogen in the water vapor, creating the hydrochloric acid.

This acid mist can cause irritation and burning, particularly to the eyes, skin and respiratory tract. But it and the glass shards are only dangerous if you’re standing or sailing in the immediate vicinity.

The ongoing eruption has created nearly two dozen fissures, and Poland said it’s unclear how many of the resulting lava flows might enter the ocean. The lava flows reshape the land, creating an array of channels. Some lava follows the same path, while others “may butt up against the existing flows and be diverted into new ocean entries,” Poland said.

One thing is clear: Kilauea’s lava is moving swiftly.

Klemetti speculates this speed might mean the lava is hotter than normal. So even though the lava is the consistency of honey, it’s less sticky than usual because of the extra heat.

“As the lava flows, the edges cool and start to build up — like a levee or wall on each side. They eventually develop a channel as the walls get taller,” Klemetti said. “Channels that are forming can help sort of insulate the lava flows and keep them hotter for longer so they can travel further down down slope.”

It’s official: Hawaii is growing because lava seeping into the ocean is adding new land mass to the Big Island. But you should hold off on buying this land for beachfront property.

One collapse of a lava bench in 2016 created such a big explosion of ash and steam that it could be seen from space.

Both Klemetti and Poland warned of so-called “lava benches” or “lava deltas” — places along the coast where the lava cools and builds outward. The lava benches are made of splotchy rock with a foundation comprised of sand.

Their cooled rocky surface may not burn your feet, but they have a tendency to collapse. Many people have been killed this way, Poland said.

“They were caught up in the collapse and swept out to sea,” Poland said. “Or when the collapse happened, it exposed a tremendous amount of hot rocks to the ocean all at once — that generated small explosions of rock.”

One collapse of a lava bench in 2016 created such a big explosion of ash and steam that it could be seen from space. The collapses can also create large waves and threaten nearby boats.

Over the weeked, Hawaii officials reported the first injury due to the eruption, a broken leg caused by flying lava spatter. The good news: At this point, we’ve pretty much seen Kilauea’s full hand of hazards, Poland said, listing the lava entry into the ocean and other risks, like volcanic fog (“vogs”) of sulphuric acid, fast-moving lava and spattering gas emissions.