The New York pizza slice is a perfect hot, quick lunch that you can grab as you head to the subway. From the streets of Manhattan to Sydney to

How did a single version of a simple food become an international standard bearer?

You can get a taste of the answer in “Food Routes” — a new book by Robyn Metcalfe that explains how certain food producers, like New York City pizza makers, came to dominate their food supply chains.

“As I traveled around the world looking at the way very, very simple dishes came together on people’s plates,” said Metcalfe who directs the the Food + City lab at the University of Texas at Austin, “no matter what city I went to, whether it was Istanbul or Tokyo or New York City, there were the same four themes that emerged every time.”

These four ingredients are reliability, adaptability, trust and technology — and Metcalfe said if one goes missing, it can break down the supply chains for our favorite foods. 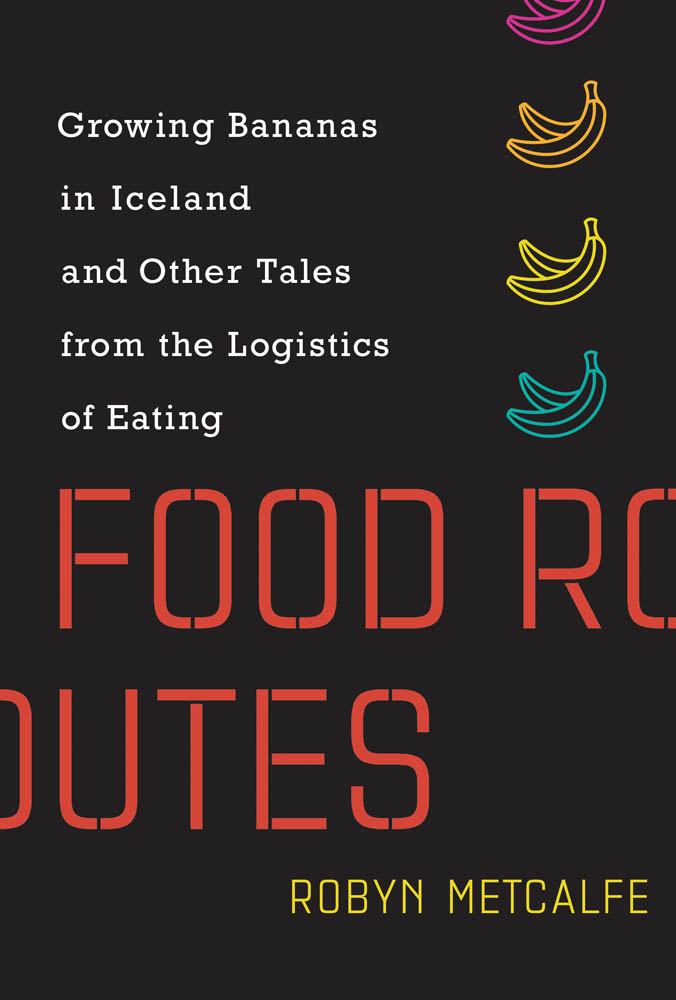 New York pizza makers rely on the consistency of their food suppliers to deliver core ingredients — pecorino cheese from Italy and mozzarella from Wisconsin. If those deliveries stop arriving, such as during a natural disaster like 2012’s Superstorm Sandy, it can cripple service for months.

Metcalfe also visited pizzerias that adapted to such calamities, some by having a handy, backup food source. This flexibility helps build trust between the restaurants and their customers, who can always count on their pizza, notwithstanding mother nature.

In the case of the New York pizza slice, the key piece of technology arrived in the 1930s: the invention of the gas-fueled deck oven. Most New York slices around the world — whether served from a food truck, an Italian restaurant or a pizza chain — are cooked in these deck ovens.

PBS NewsHour spoke with Metcalfe, a pizza historian and pizza makers about about how this unassuming oven turned the New York slice into an international icon.

Where did the New York pizza oven come from?

Let’s rewind to the early 1900s, when Italian migrants streamed into the Northeastern United States. By 1920, nearly a quarter of the 1.6 million Italian immigrants in America lived in New York City — and they brought along a bunch of bedroom-sized coal- and wood-fired ovens.

“They were built by masons to bake bread, but they were being utilized to make pizza,” said Scott Wiener, a pizza historian and pizza tour guide. “So that’s the foundation of pizza in New York.”

These Neapolitan bakers would begin at dawn because it took time for the coal-fired ovens to warm to the 900 degrees Fahrenheit needed to cook bread. That temperature is way too hot for pizza dough, unless you enjoy charred crusts, so the first pizza purveyors primarily baked slices early in the morning. Today, coal-fired pizza remains a precision art — even with more modern hearth ovens.

Frank Mastro sits with his invention, the gas-fired pizza oven (left). He stands in front of a later model in 1934 (right). Photo courtesy of Vincent Mastro

New York pizza began stepping away from coal-fired hearths in the 1930s — thanks to Frank Mastro.

Mastro, an Italian immigrant and salesman, wanted New York pizza to become a household commodity, but coal-fired ovens required too much time to make the dish in large quantities. And once this pizza was made, you couldn’t reheat it because the crust was too crispy.

So, Mastro designed a gas-fueled oven packed into a rectangular box.

“That totally changed all things pizza,” Wiener said. “That put a flame underneath an oven floor instead of inside the oven, so you could get indirect heat.”

With Mastro’s invention, pizzas baked more evenly and bronzed on the top without charring, unlike with coal ovens. At 550 to 600 degrees Fahrenheit, the deck ovens prepared pizza in minutes, and the resulting slices can be quickly handled without scorching your fingertips. This advantage set the stage for prebaking pizza that could be easily reheated by the slice, for service and sale to the public, Wiener said.

“The New York slice is unique among pizza styles because it’s a grab and go style,” Wiener said. “It’s the kind of food that lends itself very well to urban environments where there’s a lot of pedestrian traffic. Foot traffic equals pizza by the slice.”

Pizza makers rode the gas-fueled deck oven from the mid-1900s into the 2000s without making many changes. New York Pizza Suprema, a joint located across the street from Manhattan’s Penn Station, still uses its original deck ovens from 1964.

“With the gas-fired ovens, it cooks the water out more, and the slice gets crispier,” said Pizza Suprema’s Nick Satchell. “You get a better life out of the slice. When you reheat it comes back to life, and it tastes just as good.”

Two futures for the pizza oven; one electric and one with lasers

You can easily see how the technological innovation of deck ovens helped support the three other ingredients listed in Metcalfe’s book.

Deck ovens, as their name suggests, can stack like packs of playing cards. This portability allows New York City pizza purveyors to set up joints on every street corner, meaning they can adapt to their surroundings.

The oven’s cooking properties mean thousands of sellers around the world can provide a recognizably reliable product, which builds trust.

Up until the turn of the century, you couldn’t have a New York slice without the gas-fueled deck oven.

But Mastro’s invention has now inspired a new generation of pizza ovens — ones equipped with infrared or electric panels on the floor and on the ceiling. With these tools, pizza makers can set separate temperatures for the top and bottom sections of the oven.

“The advantages to an electric deck oven versus gas deck oven is more control and consistency,” said Mike Bergemann, chef and owner of Corner Slice, a grab-and-go pizza place in Hell’s Kitchen. “We wanted to be able to bake bread, pastries and other items at a much lower temperature — all while doing our pizza at a higher temp.” 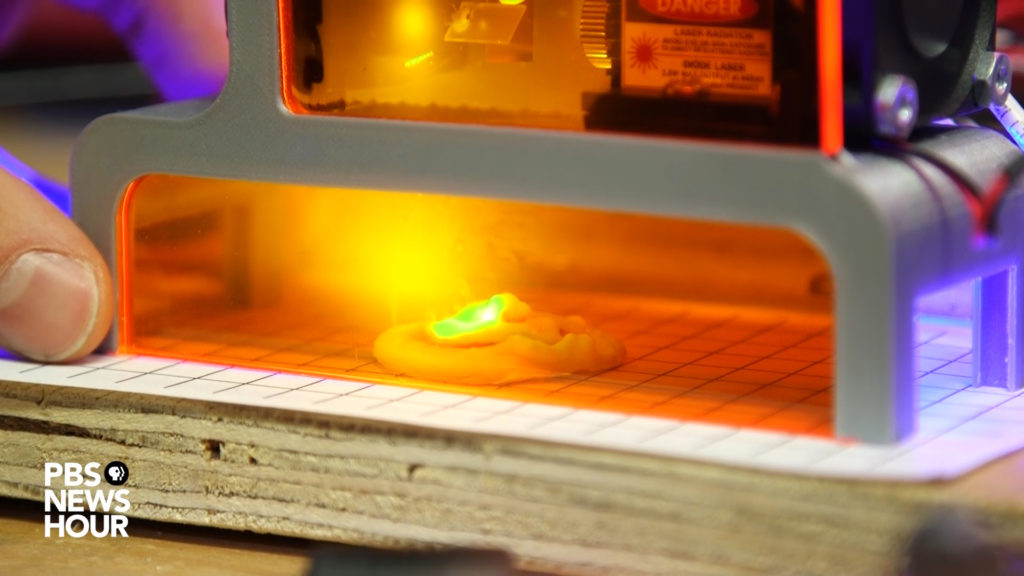 At Columbia University, Hod Lipson’s Creative Machines Lab is 3-D printing pizza — and then cooking it with lasers. Image by Sam Weber

Greater flexibility means more room to customize. Corner Slice makes what Bergemann calls a grandma-style pizza — thinner than a Sicilian, with the chunky tomato sauce on top of the cheese, fresh mozzarella and basil. Who’s hungry?

And yet, some people say there’s still room to improve. Uptown at Columbia University, Hod Lipson’s Creative Machines Lab is 3-D printing pizza — and then cooking it with lasers.

“The printer has an array of food cartridges — where each one of these cartridges you can have a different material. So dough, sauce and cheese, for example,” said Jonathan Blutinger, a PhD student and mechanical engineer in the lab.

The laser is baked into a miniaturized oven. It shines at two different mirrors, which are moved by motors guided by custom software, flashing it across the top of the pizza, cooking it one millimeter at a time. That provides greater precision.

The end product, in truth, looks and tastes like a tiny pizza bagel rather than a New York slice, but Blutinger has ideas about advancing it to make bigger portions for settings where space is tight. NASA has invested in a similar 3D-printing project for its astronauts since 2013. Blutinger thinks 3D-printed food could also be great for hospitals where people may have certain vitamin deficiencies or need medicine delivered via their food.

“The biggest value is the fact that you can customize nutrition for someone,” he said.

WATCH: Folding pizza makes it easier to hold, and here’s the proof

Metcalfe agrees on the potential for 3D-printed food, though she said the idea will need a lot more validation. In the immediate future, she is excited by how digital ledgers might change the industry.

“Blockchain could be one of those ways that can not only track food all the way through the system, but also ensure that the system hasn’t been tampered with for food safety,” Metcalfe said. “Blockchain really promises to be potentially a good solution for some critical problems within the food supply chain.”

Though, innovation doesn’t always yield better quality. Wiener said when he thinks about food ordering apps — think Caviar or Uber Eats — he recalls stories of pizza boxes bouncing around the front seats of cars. Pizza chains solved this issue years ago by designing insulated delivery bags that can be strapped into car seats — third-party drivers don’t typically own these bags. “Without a doubt, the biggest development is needed in pizza box technology,” Wiener said.

Regardless of where the technology goes, people will always want the New York Pizza slice to maintain the basics, Metcalfe said.

Left: The New York pizza slice became a triumph of the modern food system thanks to one simple innovation. Video by Jamie Leventhal and Nsikan Akpan