Laze, vog and other volcano vocabulary inspired by Kilauea

This week marks a month since Kilauea began spouting lava across the southeast corner of Hawaii’s Big Island. Fountains of basaltic molten rock — more than enough to fill 1,200 Olympic-sized swimming pools — have wiped out more than 600 homes.

The eruption has devastated the island’s Leilani Estates neighborhood and surrounding areas, threatened people’s lungs with toxic fumes and injured at least one man.

But it has also reminded us of the seismic contribution that Kilauea has made to volcanology: It offers insights into how the Hawaiian islands formed and has improved eruption prediction worldwide. Its 33-year eruption exposed the guts of our planet in ways previously unseen.

And along the way, Kilauea has inspired a number of volcanology terms. We turned to four volcanologists to help understand the words used and their origins.

“Pāhoehoe” flows are those long streams of ribbon-like lava being captured by photographers in helicopters circling Kilauea.

Volcano vocab from around the world

Lahar is an an Indonesian word that refers to a torrential mudflow created when volcanic material mixes with water.

Geyser is named after the Great Geysir, a geyser located in southwest Iceland. It first erupted in the 14th century.

Caldera is the Spanish word for cauldron. It refers to the large volcanic crater formed at the mouth of a volcano, typically due to the exterior collapse of a magma chamber.

These rivers start as lava that oozes through a cooling outer crust, like warm honey leaking from a balloon.

A‘ā lava moves like cookie batter but is much more gooey and crumbly. Its lava cools at the leading edge and then is repeatedly engulfed by the advancing molten interior. Pāhoehoe burns slightly hotter than ‘A‘ā. But as Pāhoehoe cools, it can become ‘A‘ā.

Both Pāhoehoe and ‘A‘ā are considered basaltic flows, due to their iron-rich nature which makes the flows liquidy.

Both are different than pyroclastic flows, such as the deadly ones created this week by Guatemala’s Fuego Volcano. With a pyroclastic eruption, the magma exits the volcano as a spray of solid rock, which tumbles and knocks out everything in its path.

“A pyroclastic flow is a kind of volcanic avalanche,” said Janine Krippner, a volcanologist at Concord University who studies pyroclastic flows. “It cascades down the volcano at extremely high speed and very high temperatures.”

Prior research has shown pahoehoe is more likely to cause damage to structures than A’a, unless the A’a lava is especially deep (on the order of yards).

Pāhoehoe and ‘A‘ā happen in outer space too.

People use the same terms when referencing lava flows on Mars or on Venus, said Tracy Gregg, a planetary volcanologist at the University of Buffalo.

Laze — or lava haze — is the dense cloud of glass shards and hydrochloric acid created when basaltic lava enters into the ocean.

“You get more vog in tropical climates where the atmosphere is already kind of moist and humid.”

“It’s not like Mount Saint Helens, where you had so much ash that if you’re in the wrong place and you breathe it in, then you’re done,” said Erik Klemetti, a volcanologist at Denison University in Ohio. “For the laze material, there’s not enough ash in it to fill your lungs, but the shards and acid are enough to damage your lungs severely.”

Vog is volcanic fog, a choking vapor filled with hazardous gases — like sulfur dioxide — which are released from burping vents.

“Vog is what you get when sulfur dioxide emissions — from an active eruptive vent or the lava lake at the summit of Kilauea — gets in the atmosphere and it starts mixing with water vapor,” said

While the origins of vog and laze are unclear, the terms didn’t hit mainstream culture until the Honolulu Advertiser used laze and vog in March 1990. Soon after, both started appearing in newspapers across the country.

Kilauea is one of the most prominent sources in the world for vog, though its appearance is somewhat tied to climate, Gregg said. “You get more vog in tropical climates where the atmosphere is already kind of moist and humid.”

Kipuka is a Polynesian word that means hole or window, and it refers to what happens when lava flows around a tract of land.

These little islands of untouched forest or dirt create hotspots for adaptation and evolution. Organisms left behind on kipukas become cut off and begin to adapt to the environment. Hawaii has more than 800 species of fruit flies in part because of kipukas. 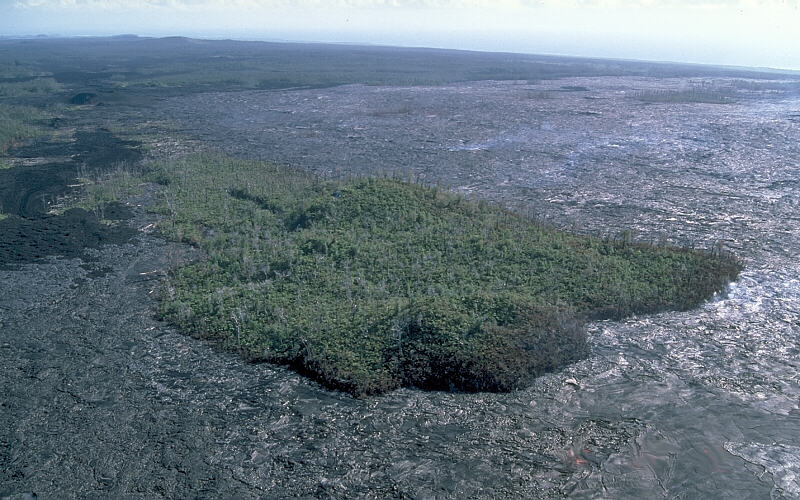 This kipuka formed during the Pu`u `O`o-Kupaianaha eruption on the east rift zone of Kilauea Volcano, Hawaii. Photo by J.D. Griggs/via wikimedia

Hawaiian refers to the weakest of the five main types of magma eruptions. Hawaiian eruptions, like Kilauea’s, are gentle.

“The lava doesn’t explode when it comes out, but it sort of bubbles like spaghetti sauce or oatmeal on a stove,” Gregg said. “The bubbles pop, and the lava kind of spatters and makes a mess. But it’s not violently shooting up into the atmosphere.”

Hawaiian eruptions can happen anywhere, even on the moon. Orange soil sampled by Apollo 17 astronauts in 1972 turned out to be tiny spherical beads of glass once formed by a Hawaiian-style eruption on the moon.

Though Kilauea has tossed lava hundreds of feet into the air, the power of its eruptions in comparison to some other types.

Plinian eruptions, such as Mount St. Helens in 1980, are the largest and most violent. They’re named after Pliny the Younger, a Roman lawyer who witnessed the destruction of Pompeii by Mount Vesuvius in 79 AD, and after his uncle Pliny the Elder. Plinian eruptions shoot enormous columns of gas and ash up to 35 miles high. 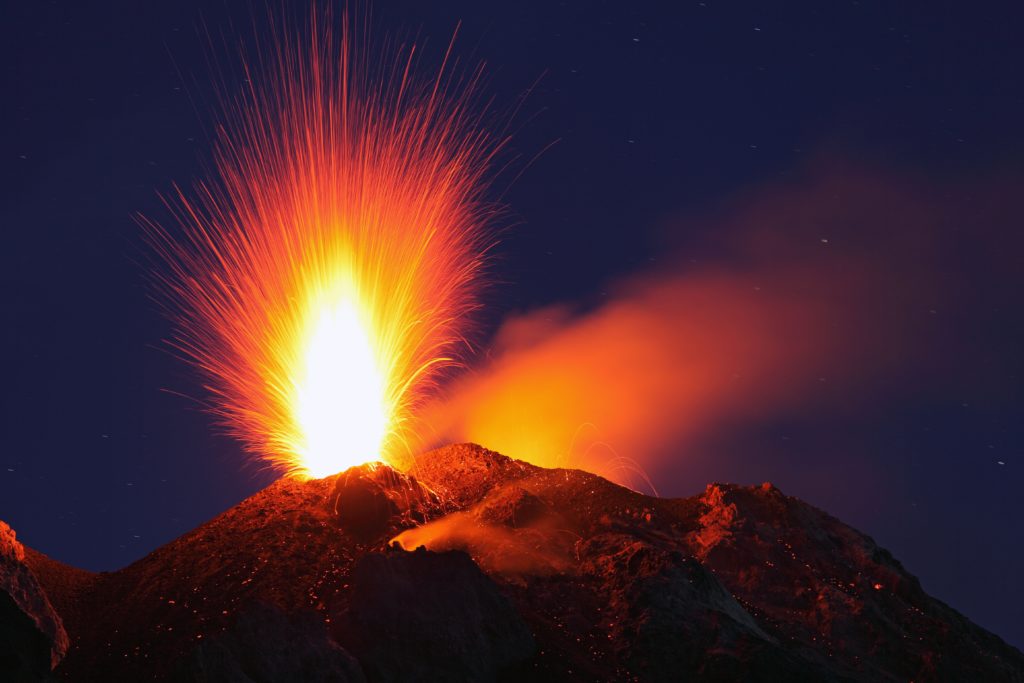 A typical, but strong strombolian eruption from the summit vent of Mt. Stromboli on May 09, 2009 in Stomboli Island, Italy. Photo by Martin Rietze / Barcroft Media / Getty Images

Guatemala’s Fuego Volcano is known for its past vulcanian eruptions, but Klemetti said Sunday’s event showed signs of being plinian or subplinian, that is, not quite as gigantic as a Plinian eruption.

Peléan explosions, like the Mayon Volcano in the Philippines earlier this year, make large quantities of gas, dust ash along with long, tonguelike lava flows. Their name hails from Mount Pelee in Caribbean. They produce thick slurries — made of gas, dust, ash and incandescent lava fragments — that move down a mountain at speeds up to 100 miles per hour.

Finally, Strombolian eruptions, named after the Italian volcano Stromboli, feature repetitive booming explosions — which can resemble sparkler fireworks. These explosions are caused by bubbles in the magma called gas slugs.

Left: Aerial views of the ocean entry on Kīlauea Volcano's lower East Rift Zone on June 12, 2018, around 6:30 a.m. HST, show multiple small lava streams spilling into the ocean along the southern portion of the lava delta in Kapoho Bay. The interaction of molten lava and ocean water creates "laze," a corrosive mixture of seawater steam, hydrochloric acid, and fine volcanic glass particles that can irritate the skin, eyes, and lungs. Image by U.S. Geological Survey