Cruising through the cool, dim waters off the coast of Northern California, Chippy the great white shark was in search of a meal — seals and sea lions.

At some point, the 14-foot-long predator saw a dark form and a silhouette. Was it potential prey? The shark rose, revealed its rows of triangular teeth and took a bite.

His “sea lion” was actually two layers of sturdy outdoor carpet, sandwiching a foam pad. Nothing about it was edible except perhaps one tasty-looking morsel of elephant seal fat trailing behind the disappointing lure, which disappeared down Chippy’s gullet.

That piece of fat included an activity-monitoring tag, activated before the big animal disappeared back into the depths.

The tags collect critical information about the elusive sharks, including body temperature, tail movements water depth and feeding behavior. But instead of regurgitating the scientific tracking tags after a few days or a week, like most sharks do, Chippy swam with the tag for a full 30 days. And when he finally got rid of it, the tag didn’t contact satellite networks that help researchers retrieve the data. Salvador Jorgensen, leader of the research team that created the “blubber burrito” — the ball of bait and miniaturized instruments that Chippy swallowed — gave it up as lost.

A great white shark approaches a “blubber burrito,” a piece of seal fat wrapped around a tag. When the shark swallows the tag, researchers can record their activities. Image courtesy of the Monterey Bay Aquarium

More than a year passed — fall, winter, spring, summer, fall again. As winter set in, California’s great white sharks embarked on their annual migration out to the center of the Pacific Ocean. Near Hilo, Hawaii, Ka’eo Paradis, a boy then 8 years old, and his grandmother Patricia Kaleiwahea drove down to Onekahakaha Beach Park to set up for a friend’s baby shower.

Paradis has “always been an explorer,” Kaleiwahea said. As Kaleiwahea worked, Paradis went for a walk along the sand, bringing her back her an object that had washed up on the nearby rocks. With one look, she said, she knew he’d really found something special.

Chippy the shark’s tag, containing a full 30 days of precious information on great white shark behavior, had arrived on a beach on an island more than 2,000 miles away and 15 months after he had swallowed it.

Months later, in July, Paradis and his grandmother visited the Monterey Bay Aquarium and brought the story full circle.

Chippy’s tag started its journey in California, detoured to Hawaii and then made the return trip, bringing with it an enthusiastic pair of amateur shark scientists and a reminder for Jorgensen, a marine ecologist at the Monterey Bay Aquarium in California, that while his research is aimed at understanding sharks, science is built by human connections.

“I think it’s cool that the animals we’re studying are making a connection between people, too,” Jorgensen said.

How the tag got to the islands

Great white sharks are striking animals. Reaching up to nearly 20 feet in length, a fully grown white shark could outweigh four adult grizzly bears. They’re individually identifiable by the scars, nicks and notches that accumulate on their dorsal fins. And they’re more likely to be seen near shore than other large migratory shark species.

But despite their size, horror movie reputations and close proximity to cities like San Francisco, we don’t know much about what these animals do. We don’t know, for example, why sharks frequent certain food-rich areas over others, or where they are most successful at hunting prey, Jorgensen said. “That’s where the blubber burrito comes in.”

“Blubber burritos” entice sharks into swallowing an activity-monitoring tag. When the sharks regurgitate the tag, researchers rely on the satellite antenna to find it again. Image courtesy of the Monterey Bay Aquarium

Chippy’s tag and others like it track 10 different measurements 50 times per second, according to Jorgensen. With all of the movement trackers, thermometers, pressure monitors and light sensors packed inside a tag, packed inside the blubber burrito, researchers can keep an account of white shark activities from inside the sharks themselves.

“Anytime an animal is submerged below the surface, they’re cut off from any radio signals like Bluetooth signals or GPS trackers,” Jorgensen said. That’s why most underwater tags are loggers — they record information but don’t send it back to researchers in real time, instead storing it for later recovery. But in order to collect that detailed data, the researchers have to find the tags and bring them back to computers on shore.

As Chippy swam along the California coast, something malfunctioned in the delicate electronics bumping around in its belly. Thirty days after swallowing the activity tracker, Chippy regurgitated it — sans satellite antenna.

Instead of signaling to researchers for pickup, the floating tag bobbed its way in silence across thousands of miles of ocean.

The journey back to California

There’s a failsafe on every tag, Jorgensen said. Each one lists a manufacturer’s phone number and a message asking finders to return the data for a reward. But sometimes, in the vastness of the Pacific, things just disappear.

This tag, however, crossed paths with an inquisitive young boy and his science-loving grandmother. “I think he was meant to find this tag,” Kaleiwahea said.

As a social worker with CARE Hawaii, Kaleiwahea thinks that her background in research helped her recognize how important the tag was when Paradis brought the scruffy-looking instrument to her. She had to scrape sand and algae off the tag with a knife before she could find the phone number to call, but she said she knew it was important. She knows the frustration of conducting surveys without getting responses.

Kaleiwahea mailed the tag back to the Monterey Bay Aquarium and then started planning a trip to follow it home. “We’ve been on an adventure ever since,” she said. 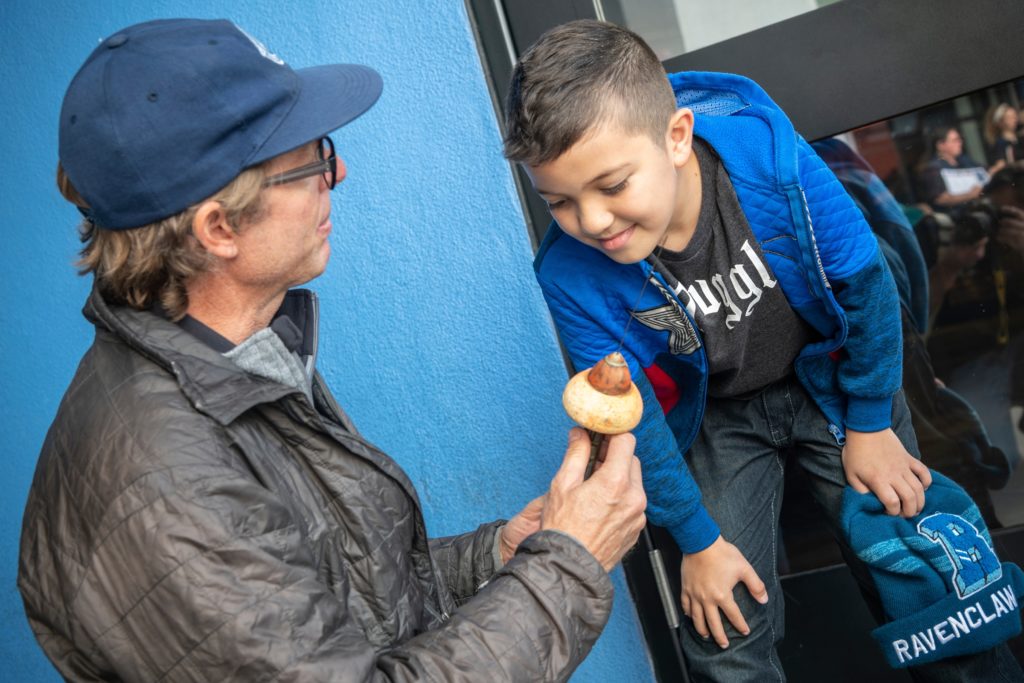 Paradis and Kaleiwahea reminded Jorgensen of his own childhood and his own grandmother. When he was just a year older than Paradis, Jorgensen’s family moved to Mozambique. After Jorgensen and his sister compiled a thorough — perhaps too thorough — list of the area’s sharks, thrilled at the opportunity to see them, his parents firmly banned all ocean swimming. “I was kind of devastated,” he said.

But Jorgensen’s grandmother intervened, and bought him his first set of snorkel gear — a gift that helped him pursue his passion for the underwater world that would someday become his career.

He sees himself in Paradis, whose recent trip to Monterey was his first time visiting the mainland, his first chance to visit a research lab and see sharks of any kind. “That kind of thing can have a big impact on a person’s life,” Jorgensen said.

Putting the pieces together

Paradis brought a cool story to the shark lab, Jorgensen said, but he also brought back important information.

“One of the things we’ve learned is the sharks feed far less frequently than one might think,” Jorgensen said. “In the hundreds and hundreds of hours of stomach time that we’ve logged, we’ve only recorded a few natural feeding events.”

Chippy’s tag, though slightly damaged, had recorded two such events — sudden drops in the recorded temperature showed the shark had swallowed cold ocean water along with chunks of food, which were digested at a higher temperature than the shark’s normal body warmth.

Later, when Chippy spat the tag back out, the cold water surrounding the tag proved that the shark was still near the California coast, where currents keep water at a brisk 50 to 60 degrees Fahrenheit. That’s valuable data, Jorgensen said. It’s more evidence that white sharks do most of their feeding close to shore.

But neither Jorgensen nor Paradis consider all their questions to be answered — both have big ambitions for future shark research. Jorgensen will keep tagging sharks to better understand which areas might be most vital to preserve as shark habitat.

And though he cut his teeth on great whites, Paradis, now 9, says he wants to study hammerhead sharks. “I’m planning to be a biologist when I grow up,” he said. 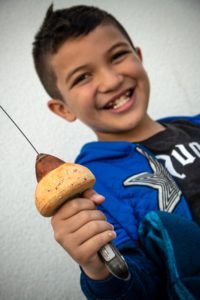 Ka’eo Paradis and the shark tag he found on a beach in Hawaii. Image courtesy of the Monterey Bay Aquarium

Left: Great white sharks are often found near shore. Researchers want to know when, where, and how they feed. Image courtesy of the Monterey Bay Aquarium