As a field biologist, Charlotte Devitz traverses the University of Michigan campus scooping up squirrels, trying to understand what causes some to boldly steal pizza from people’s hands while others hide at the drop of a hat.

She weighs, measures and tags them, and then drops them into a custom-made box that allows her to watch their behavior. Then she sets them free to scale another tree or gnaw on another nut.

A little more than a year ago, she wasn’t sure this work toward a master’s degree — vital to her future career as a biologist — would be possible.

“Especially after I had to start using a wheelchair, I didn’t think I could stay in STEM,” Devitz said.

Taking classes, teaching classes and doing the independent field research necessary to pursue a career as an evolutionary biologist — it all seemed insurmountable on top of her illness, she said. 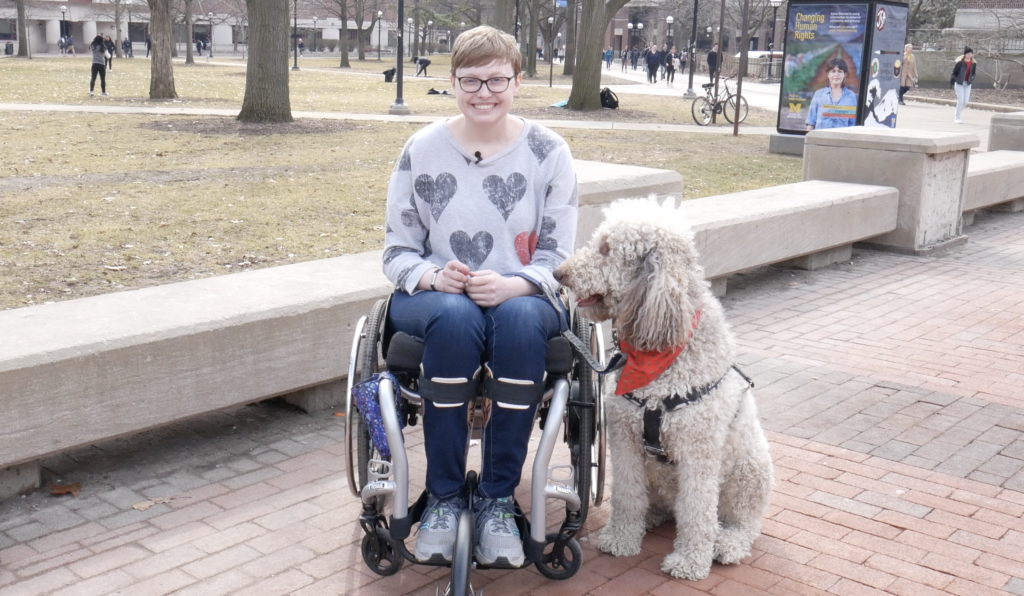 Charlotte Devitz, a researcher, and Fish, a service dog. Image by Sean Moore/University of Michigan News

Devitz has Ehlers-Danlos Syndrome, a set of inherited disorders that affect her body’s connective tissues, like her joints, skin and blood vessels. In addition to her wheelchair, she must use a feeding tube. Her service dog, a labradoodle named Fish, accompanies her around campus.

But Devitz successfully navigated student accessibility services and medical procedures, carving out a place for herself to pursue field research despite her medical issues. She’s part of a trend: researchers expanding the boundaries of accessible science.

“People with disabilities are incredible innovators. We have to figure things out on a daily basis in a world that is not built for us.”

More than 25 percent of adults in the United States identify as having a disability — some physical or cognitive condition that limits their movements, senses or activities.

That’s a huge group of people who are underrepresented in scientific breakthroughs and technological development at the professional level, said volcano geophysicist and geoscience education researcher Anita Marshall of the University of Florida.

And that lack of representation leaves science as a whole worse off.

As the world faces a climate crisis and a growing global population, we’ll need all hands on deck, Marshall said. “People with disabilities are incredible innovators. We have to figure things out on a daily basis in a world that is not built for us — that kind of innovation, in science, could be amazing. And it is amazing.”

Accessibility in the field can make a career

Field research is considered a necessity for some sciences. For example, 99 percent of geology degrees surveyed in 2008 required a field component, meant to give students a taste of the tools and techniques used by professional geologists. Archaeologists and anthropologists value time spent in their study systems, collecting first-hand knowledge in new and unfamiliar places.

Epiphanies happen in the field, a young student might be told. One could see biological processes in motion in a remote tropical forest or on a busy coral reef that could never be recreated in a lab.

“When we exclude people, that’s excluding them from building the social capital that they’ll need to succeed in the field.”

“We have a culture that says that, if you cannot hike up that mountain with a pack on your back, you are less of a geoscientist,” Marshall said. Peers and potential employers consider physical — and mental — toughness a necessity for a budding researcher, or a way to weed out the candidates who presumably care less from those who are “serious.”

“Those activities are bonding activities. That’s how scientists find collaborators. That’s how students find letter-writers and potential grad student advisors,” Marshall said. “When we exclude people, that’s excluding them from building the social capital that they’ll need to succeed in the field.”

How to improve accessibility in fieldwork

That awareness is a paradigm shift for most non-disabled people. Marshall was hit by a drunk driver in graduate school — a collision that left her with what she describes as “a pretty mangled left leg,” among other injuries. She came back to research with a new understanding. “Many things hadn’t even crossed my mind in terms of accessibility, or the daily challenges that people with disabilities face,” Marshall said.

Researchers with physical disabilities might be able to use drones, satellite imaging and long-distance photography, Marshall said. With some resources, people can modify those kinds of tools to operate from a tablet. Devitz physically goes into the field, using her wheelchair and a device called a FreeWheel that attaches to the front of her chair and allows her to “go off-roading,” as she calls it, through mud, grass and snow.

“If you think about it,” Marshall said, “the moon is also inaccessible. Mars is inaccessible. And yet we do science on them anyway.”

That means it isn’t necessarily physical barriers that keep researchers with disabilities out of field research.

It’s rules and policies in class descriptions or job ads that imply that only able-bodied people need apply, Marshall said, and it’s the implication that a disabled person will be left out of important activities because class leaders or principal investigators aren’t willing to make accommodations. 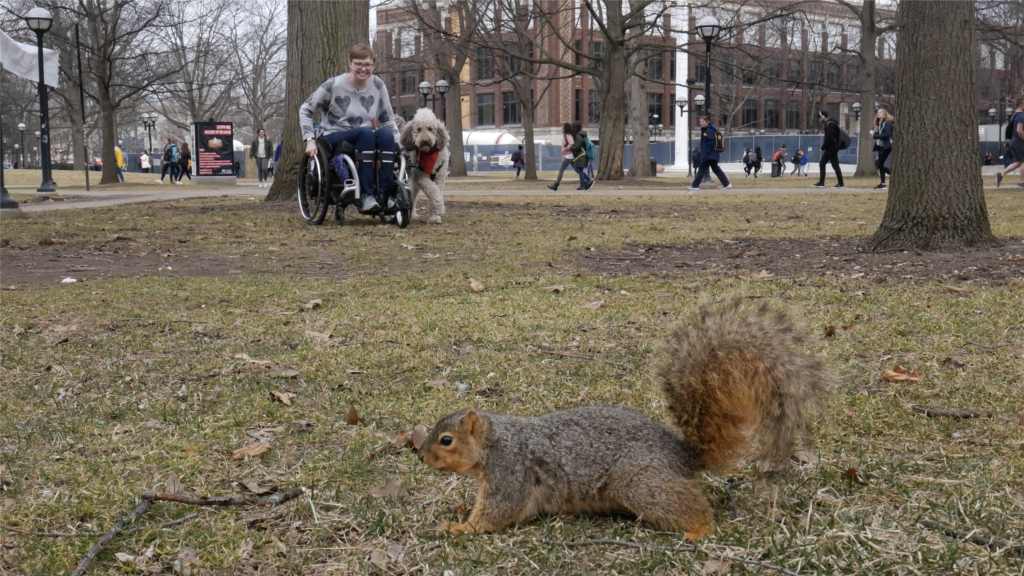 Devitz uses a wheelchair to navigate parks and urban environments while researching squirrels. For her, that’s an accessible research environment. Image by Sean Moore/University of Michigan News

“Boilerplate accommodation statements will not cut it,” Marshall said. “People read that as ‘you don’t care.’”

Marshall and Devitz agreed a clear statement that every student or employee’s participation matters is a good first step.

“Just being open and clearly willing to work with a person is, I think, the most important thing,” Devitz said.

In her blog, The Bendy Biologist, where she writes about science and accessibility, Devitz has discussed “access anxiety” — the awkward feeling of needing to ask for accommodation at every turn, even where it should be expected by law or common courtesy.

Blasting away those social and institutional boundaries may take time, but Marshall is optimistic.

It’s all about mindset on the part of institutions, Marshall said. Field science “is only inaccessible because we’ve decided it is. We’ve decided: Mars — we’re going there, so we are going to invent what we need to get there. We changed that mindset. We can change this, too.”