Scientists and the public agree on very little when it comes to climate change, childhood vaccine requirements and more, but both groups feel more pessimistic about the direction of science, according to a new study released today from the Pew Research Center.

In fact, when Pew staff looked for overarching patterns that helped to explain why scientists and the public share some opinions but not others, they couldn’t find any, said Lee Rainie, director of Internet, science and technology at Pew Research Center.

“What was really striking about this is that you really had to go issue by issue. There were no really broad patterns,” Rainie said. “There is just such interesting variance in these answers, and there was no single explanation.”

Conducted in collaboration with the American Association for the Advancement of Science, the study used surveys conducted in 2014 with about 2,000 adults and more than 3,700 U.S.-based scientists who are AAAS members. They were asked both about specific issue and policy areas related to scientific research and technology as well as science’s contributions to society, revealing a wide gulf in opinions between the two groups. 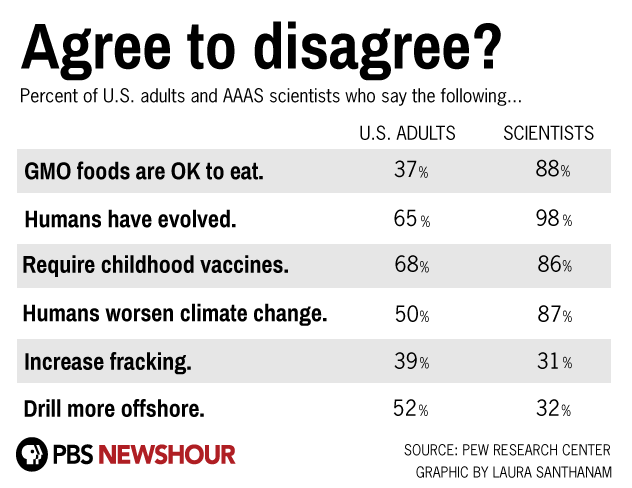 Some figures might raise questions at first glance. For example, the finding that 87 percent of scientists agree that humans are largely responsible for climate change (only half of the general public think so) may initially appear as if evidence that the scientific consensus on climate change, which has been supported by 97 percent of scientists, is not as strong as it once was.

However, the Pew study asked this question of scientists from multiple disciplines, whereas the 97 percent figure is among climate scientists.

The magnitude of perceptions differ due to sampling and the exact questions asked, but the overall finding supports what most scientists see as established fact — that is, humans are the primary cause of climate change, said Cary Funk, associate director of research at the Pew Research Center.

“These findings are broadly consistent with those kinds of figures,” she said.

That unwavering message doesn’t mean that wide swaths of the general public accept the premise of manmade climate change or other issues largely supported by scientists, Rainie said.

“For some of the most contentious issues, scientists would say, ‘We’re speaking with relatively much consistency,’ and the public says, ‘Well, that’s not what we’re hearing,’” he said.

Beyond issue agreement, scientists feel worse about the state of science now than they did five years ago, according to the study.

Slightly more than half of scientists think now is a good time for science, compared to more than three-quarters of scientists in 2009. Funk described this as “a pretty large drop” from just five years ago. Most scientists said it is difficult to secure research funding, and few scientists agreed that the best science influences certain policy areas, such as environmental issues and land use.

Support for the government’s continued funding of science remains strong. Nearly two-thirds of the public still consider government-funded research as “essential for scientific progress,” compared to one-third of the public who said, “Private investment will be enough,” the report said.

One finding that may jar the scientific community is that little more than half of the general public surveyed think this country’s scientific achievements are either above average or the best worldwide, compared to 92 percent of the scientists who thought so.

That’s a big problem, according to Alan I. Leshner, the chief executive of the AAAS and the executive publisher of Science, in an editorial he wrote called “Bridging the Opinion Gap” that will run in the Jan. 30 issue of the journal.

“Such disparity is alarming because it ultimately affects both science policy and scientific progress,” he wrote.

If the general public is to share more opinions with members of the scientific community, scientists themselves cannot ignore concerns that people may have about research process or findings, Leshner wrote.

“[T]here needs to be a conversation, not a lecture. The public’s perceptions of scientists’ expertise and trustworthiness are very important but they are not enough. Acceptance of scientific facts is not based solely on comprehension levels.”

Editor’s note: The graphic has been updated to accurately reflect the figures for fracking and offshore drilling.

Left: A recent study from Pew Research Center reveals gaping differences in opinion between scientists and the general public about issues related to scientific research and the direction science is taking. Photo by Reuters