The Earth’s magnetic north pole is shifting rapidly – so what will happen to the northern lights?

Like most planets in our solar system, the Earth has its own magnetic field. Thanks to its largely molten iron core, our planet is in fact a bit like a bar magnet. It has a north and south magnetic pole, separate from the geographic poles, with a field connecting the two. This field protects our planet from radiation and is responsible for creating the northern and southern lights – spectacular events that are only visible near the magnetic poles.

However, with reports that the magnetic north pole has started moving swiftly at 50km per year – and may soon be over Siberia – it has long been unclear whether the northern lights will move too. Now a new study, published in Geophysical Research Letters, has come up with an answer.

Our planetary magnetic field has many advantages. For over 2,000 years, travelers have been able to use it to navigate across the globe. Some animals even seem to be able to find their way thanks to the magnetic field. But, more importantly than that, our geomagnetic field helps protect all life on Earth.

This rapid wandering of the north magnetic pole has caused some problems for scientists and navigators alike.

Earth’s magnetic field extends hundreds of thousands of kilometers out from the centre of our planet – stretching right out into interplanetary space, forming what scientists call a “magnetosphere”. This magnetosphere helps to deflect solar radiation and cosmic rays, preventing the destruction of our atmosphere. This protective magnetic bubble isn’t perfect though, and some solar matter and energy can transfer into our magnetosphere. As it is then funneled into the poles by the field, it results in the spectacular displays of the northern lights.

Since Earth’s magnetic field is created by its moving, molten iron core, its poles aren’t stationary and they wander independently of one another. In fact, since its first formal discovery in 1831, the north magnetic pole has travelled over 2,000km from the Boothia Peninsula in the far north of Canada to high in the Arctic Sea. This wandering has generally been quite slow, around 9km a year, allowing scientists to easily keep track of its position. But since the turn of the century, this speed has increased to 50km a year. The south magnetic pole is also moving, though at a much slower rate (10-15km a year).

This rapid wandering of the north magnetic pole has caused some problems for scientists and navigators alike. Computer models of where the north magnetic pole might be in the future have become seriously outdated, making accurate compass-based navigation difficult. Although GPS does work, it can sometimes be unreliable in the polar regions. In fact, the pole is moving so quickly that scientists responsible for mapping the Earth’s magnetic field were recently forced to update their model much earlier than expected.

Will the aurora move?

The aurora generally form in an oval about the magnetic poles, and so if those poles move, it stands to reason that the aurora might too. With predictions suggesting that the north pole will soon be approaching northern Siberia, what effect might that have on the aurora?

Fortunately, for those aurora hunters in the northern hemisphere, it seems as though this might not actually be the case. A recent study made a computer model of the aurora and the Earth’s magnetic poles based on data dating back to 1965. It showed that rather than following the magnetic poles, the aurora follows the “geomagnetic poles” instead. There’s only a small difference between these two types of poles –- but it’s an important one. 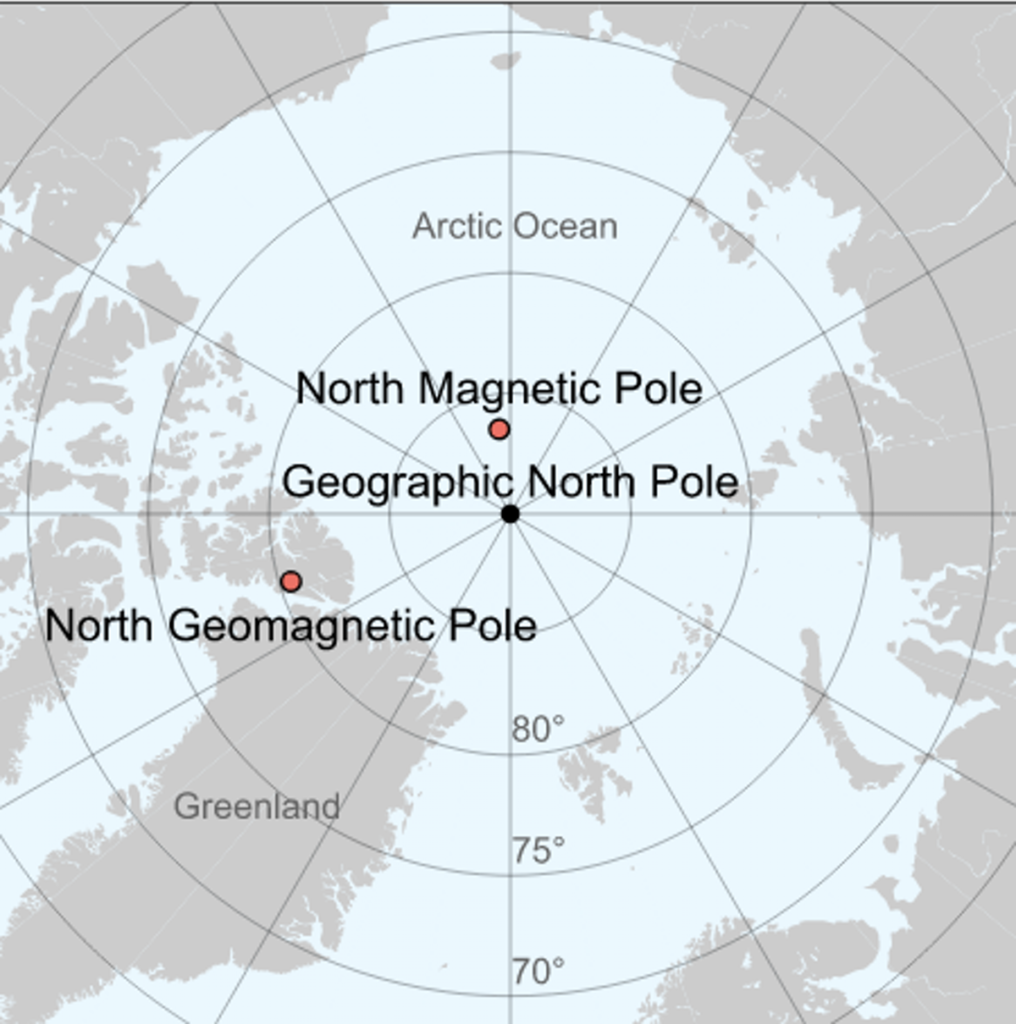 The magnetic poles are the points on the Earth’s surface where a compass needle points downwards or upwards, vertically. They aren’t necessarily connected and drawing a line between these points, through the Earth, would not necessarily cross its centre. Therefore, to make better models over time, scientists assume that the Earth is like a bar magnet at its centre, creating poles that are exactly opposite each other – “antipodal”. This means that if we drew a line between these points, the line would cross directly through the Earth’s centre. At the points where that line crosses the Earth’s surface, we have the geomagnetic poles. 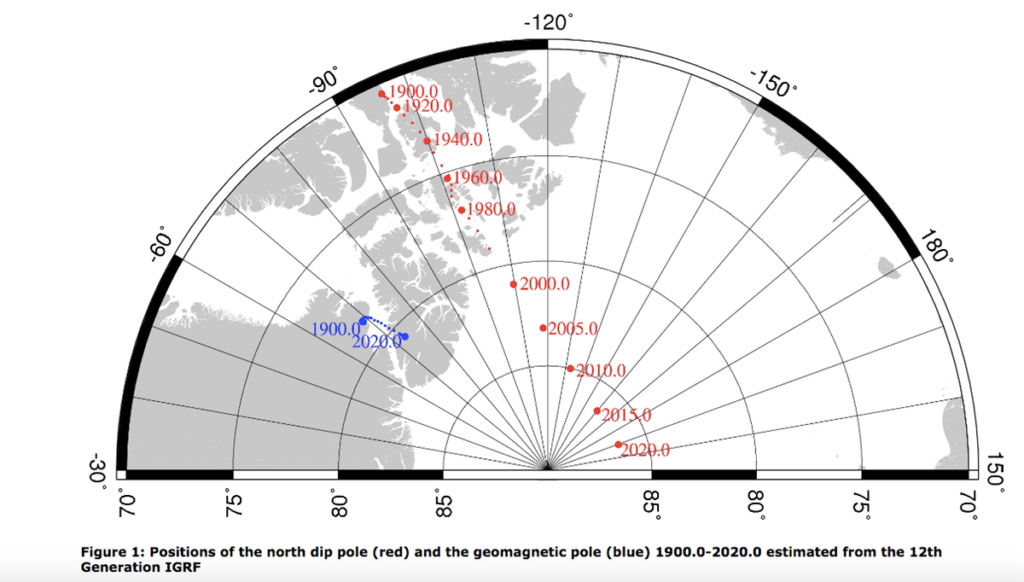 Positions of the north magnetic pole (red) and the geomagnetic pole (blue) between 1900 and 2020. Image via British Geological Survey, CC BY-SA

We already know that the magnetic pole moves. Both poles have wandered ever since the Earth existed. In fact, the poles even flip over, with north becoming south and south becoming north. These magnetic reversals have occurred throughout history, every 450,000 years or so on average. The last reversal occurred 780,000 years ago meaning we could be due a reversal soon.

So rest assured that a wandering pole, even a fast one, shouldn’t cause too many problems – except for those scientists whose job it is to model it.

Nathan Case is a senior research associate in Space and Planetary Physics at Lancaster University. This article was originally published on The Conversation. Read the original article.