Early Tuesday morning, local news outlets reported another explosive eruption at the Kilauea summit, the fourth to strike the 4,000-foot-high cauldron in three days. This ash plume arrived hours after Hawaii officials announced that lava had reached the grounds of a geothermal plant on Big Island.

The creeping lava has stalled thanks to a large mound of dirt — called a berm — but Honolulu Civil Beat reports the molten rock is merely 650 to 1,000 feet away from underground wells containing toxic gas:

But if the lava interacts with the wells of the Puna Geothermal Venture, it could trigger an uncontrolled release of deadly hydrogen sulfide, Thomas Travis, administrator of the Hawaii Emergency Management Agency said during a press conference Monday. 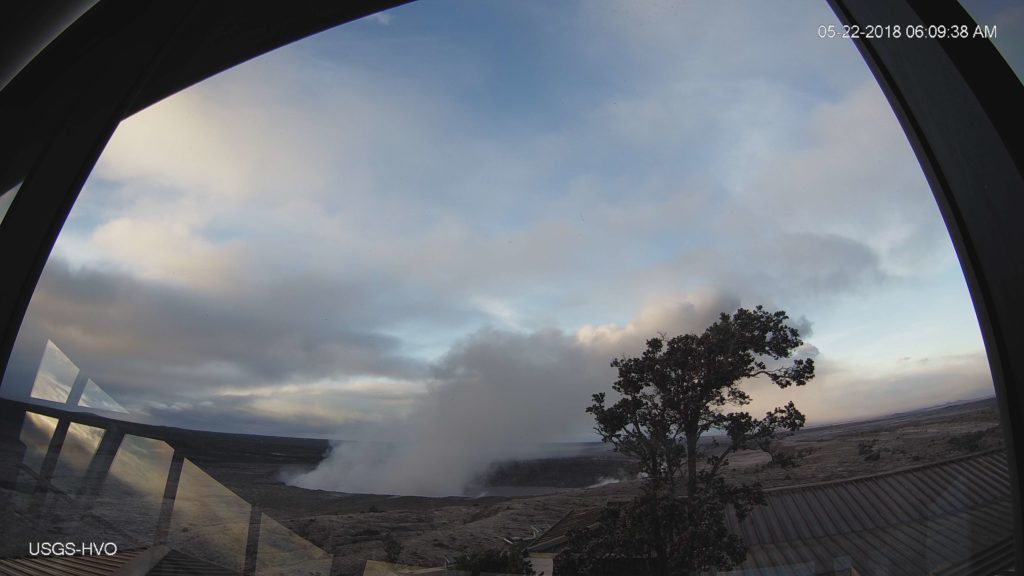 Overlook of the Halemaʻumaʻu vent at the Kilauea summit at 6:10 a.m. Hawaii Standard Time. Photo by U.S. Geological Survey

Puna Geothermal Venture sits two miles northeast of where lava from Kilauea’s fissure 20 is pouring into the Pacific Ocean. When the lava, which is anywhere between 1,100 and 2,100 degrees Fahrenheit, encounters the water, it cools rapidly into glass.

As PBS NewsHour reported Monday, some of this glass shatters, due to the explosive force of the steam being made, creating a shard-filled mist. The heat can also cause chemical reactions between the salty mist and water vapor, creating hydrochloric acid. Here is a map of the lava flows, courtesy of the Hawaii County Civil Defense.

Hawaii News Now reported emergency room visits at Kohala Hospital have increased by 30 percent in the last week. The Honolulu Star-Advertiser, the largest daily newspaper in Hawaii, wrote that the low-income communities in Puna are struggling with bouts of respiratory illnesses like chronic obstructive pulmonary disease.

On Monday, the National Park Service said the lingering eruption has cost Hawaii at least $166 million in lost tourism.