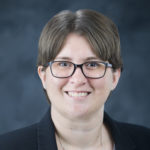 Why everyone should stand still on an escalator

Love them or hate them, traffic laws exist to keep people safe and to help vehicles flow smoothly. And while they aren’t legally enforceable, pedestrian traffic also tends to follow its own set of unwritten rules.

Most pedestrians use walking etiquette as a way to minimize discomfort – “Oops! Sorry to bump you!” – and to improve efficiency – “I want to get there faster!”

Without even thinking about it, you probably abide by the common pedestrian traffic rule that faster walkers should move to the inside of a path while slower walkers gravitate to the outside. In the United States, this aligns with street traffic rules, where vehicles pass on the left, while slower vehicles stay in the right lane of the road.

This approach to passing leads to the formation of pedestrian lanes of traffic. While they’re not painted on sidewalks like they are on roadways, these functional lanes can help pedestrians move more comfortably and quickly. Human systems engineers like me know that pedestrian lanes emerge naturally in crowded environments. 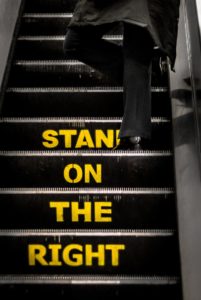 Is this the best advice? Photo by Barney Moss, CC BY

Within the built environment, designers have used different techniques to encourage particular pedestrian traffic patterns. One example is signs that encourage pedestrians to “stand to the right” on escalators. Riders will use the right half of the step if they are standing and the left half if they’re walking (or running!) to reach the end of the escalator.

But do two lanes of pedestrian traffic on an escalator actually help you reach your destination more quickly? Should there be a walking lane and a standing lane, or should both lanes be used for standing only? One study reported that 74.9 percent of pedestrians choose to stand on the escalator instead of walking. Should an entire lane of the escalator be left open for a small, impatient proportion of the crowd?

When designers plan spaces such as roads, buildings and corridors, they consider the space needed for each person in the environment. The space needed changes depending on how the space will be used. For a pedestrian, the “buffer zone” describes how much space a person needs to feel comfortable, and varies by activity. Someone standing needs, on average, a little over three square feet (0.3m²) of space, whereas a walking pedestrian needs more than eight square feet (0.75m²).

That means a constrained space such as an escalator can comfortably hold more than twice the number of standing pedestrians as walking pedestrians.

In London, planners reaped a 27 percent increase in the hourly capacity by switching to a “standing only” policy…

In London, planners reaped a 27 percent increase in the hourly capacity by switching to a “standing only” policy on a typically congested escalator at a subway station. No walking was allowed on the crammed escalator, which allowed more people to move through the station in the same amount of time as before. A highly efficient escalator is one that has the most output – that is, carries the most people to the destination.

But the change was contentious. Social convention in transport has often favored the individual traveler. For example, allowing people to walk up the left does allow some individuals to move faster, even though it reduces the capacity of the escalator and slows down the overall travel time for others. While using one of the escalator lanes for walking can help the walking pedestrian exit more quickly, walkers’ varied speeds relative to the rest of the traffic hinders overall efficiency. To improve the overall system, the system-level efficiency is what should be considered. 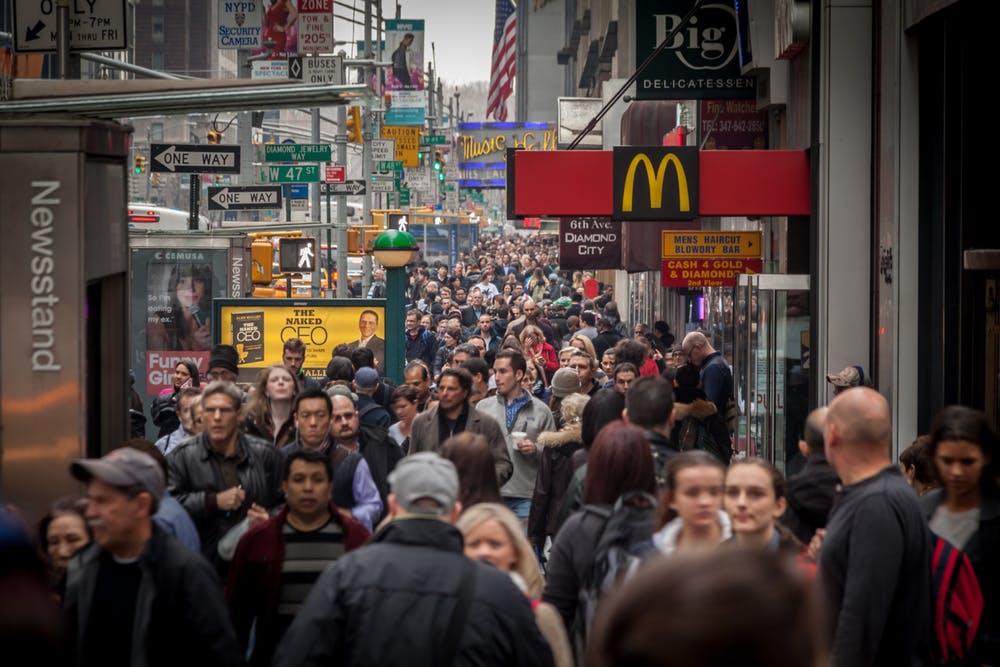 Engineers consider a lot of pedestrians in one area a high-density crowd. In these situations, pedestrians tend to walk much slower than when in a low-density or open space. This slower pace is caused by both a lack of space, as well as the need for each pedestrian to make more decisions – should I speed up? Slow down? Pass this person? Just wait? The overwhelming number of small decisions can lead to pedestrians behaving like those around them. This literally go-with-the-flow mentality makes walking less mentally fatiguing.

Stand on both sides of the escalator. The others will follow. Counterintuitive as it may seem, this one change will help everyone get to the destination faster, especially when things are crowded.

Left: Do two lanes of pedestrian traffic on an escalator actually help you reach your destination more quickly? Should an entire lane of the escalator be left open for a small, impatient proportion of the crowd? The answers may surprise you. Photo by Pavel Losevsky/Adobe Stock

Lesley Strawderman is a professor of industrial and systems engineering at Mississippi State University.