Why you should embrace your foot calluses

For most of our 200,000 years of existence as a species, humans have walked the planet barefoot. It’s only in the last 40,000 years that shoes have come into style. We evolved to feel the ground under our feet and to develop thickened skin, known as calluses, that protected us from heat, cold and abrasion. Now, many of us walk on cushioned soles that take the place of calluses.

Those cushioned shoes might also be changing the way we walk, dulling our sense of the ground below us, and eventually damaging our bodies, says a new paper published Wednesday in Nature.

In the study, biological anthropologist Nicholas Holowka of Harvard University and a team of researchers from the U.S., Germany and Kenya investigated how our new, manufactured foot protection compares to the old.

“These calluses do something that our footwear can’t. They protect our feet, but allow us to feel the ground,” Holowka said. 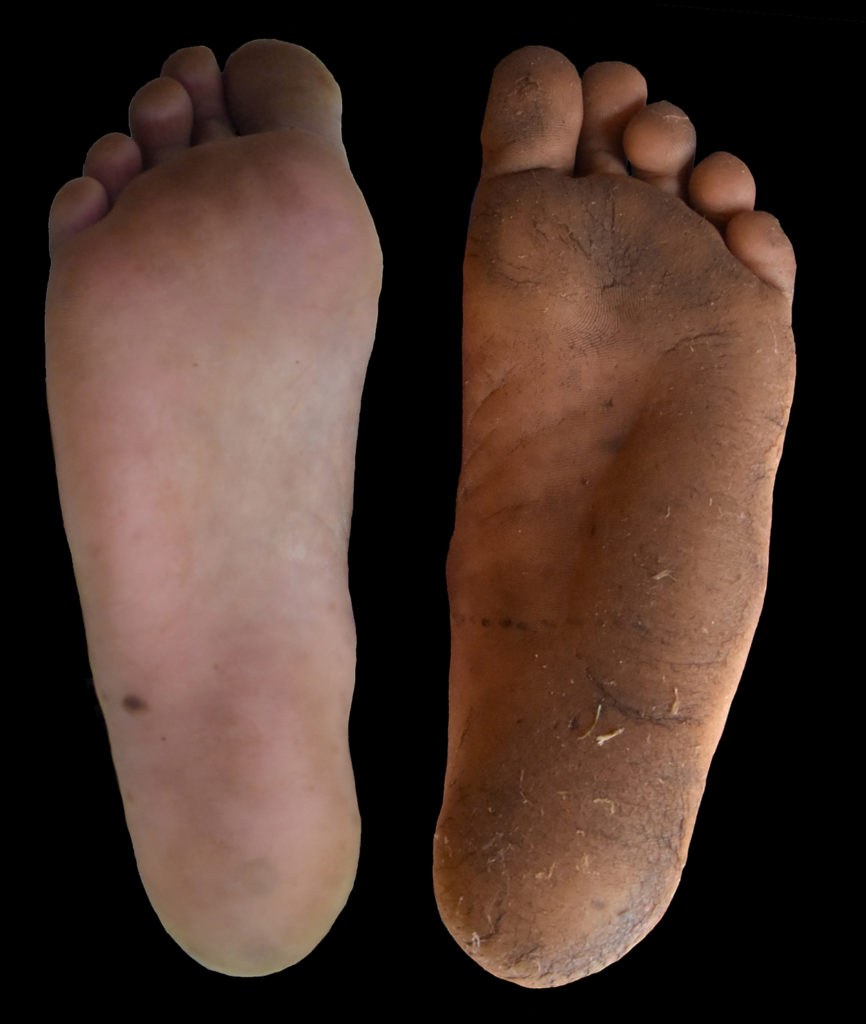 Holowka and his coauthors thought a tradeoff might exist when it comes to calluses, too — the tougher the skin on the bottom of our feet, the less sensitivity we might have when our feet touch the ground.

For people with diabetes or simply aging nerves, shoes without padding might help them retain sensitivity.

Instead, they found that calluses on habitually barefoot people don’t decrease their sense of touch.

That means there may be benefits to bare feet versus cushioned shoes — people who can feel the ground might be less likely to fall or be better able to balance on uneven surfaces. For people with diabetes or simply aging nerves, Holowka said, shoes without padding might help them retain sensitivity.

Others have walked away from cushioned shoes before. The barefoot running trend, popularized over the past ten years, looks for healthy running inspiration in the way unshod people’s feet strike the ground, although the movement has had mixed results when it comes to preventing injury. Professional and hobbyist race car drivers look for thin-soled shoes as well, not to feel the ground, but to feel the pedals and vibrations from their vehicles.

“We certainly don’t intend this study to be a criticism of shoes or wearing shoes,” Holowka said. After all, he pointed out, shoes serve a practical function and protect our feet from modern obstacles like asphalt or broken glass, as well as parasites and extreme weather — not to mention their benefits to fashion. “But we can recognize how they affect the way we walk.”

Boston-based Holowka traveled to western Kenya along with an international team including members from Harvard, Chemnitz University of Technology in Germany, Moi University in Kenya and Addis Ababa University in Ethiopia.

“We went to an area [near the city of Eldorat] where we could collect data from two populations that were genetically identical — part of the same ethnic group,” Holowka said. (That ethnic group, the Kalenjin people who live in the area, are known for dominating long distance races worldwide.)

By testing relatively similar people whose lives differed in one important way — whether they lived in the city and wore shoes, or in rural areas and usually went barefoot — the team hoped to isolate changes based on shoe use.

In their study population of 41 city-dwellers and 40 rural participants, the researchers looked for callus thickness and protectiveness on the sole of each participant’s foot.

“We had this cool portable ultrasound probe plugged into a tablet, and we basically captured images in which we could measure the thickness of the callus,” Holowka said. Then, they could test how much callused or un-callused skin indented under pressure, or how resistant it might be to stones, thorns and other abrasive hazards.

The researchers also tested participants on their foot sensitivity. While laying on a bed wearing noise-cancelling headphones, participants closed their eyes. Meanwhile, the team used a specially-designed probe that vibrated at different intensities to test the soles of their feet. The participants pressed a button to indicate when they could feel the vibrations. 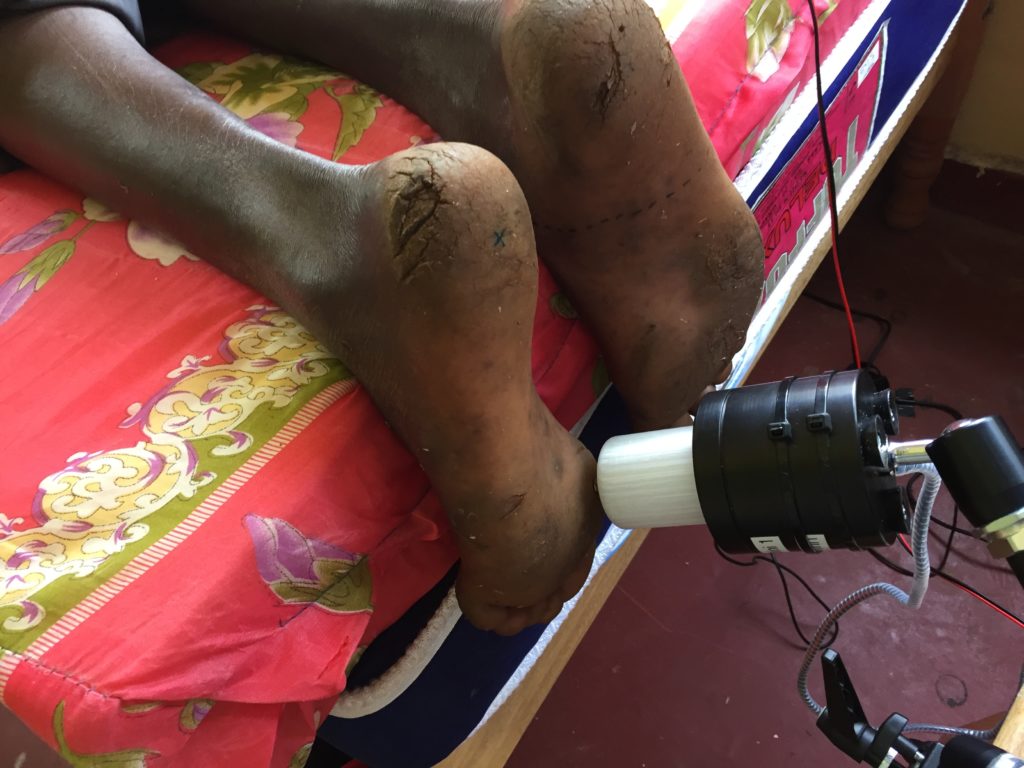 The custom-built device that researchers could use in the field to test a person’s sense of touch on the bottoms of their feet. Image by Daniel Lieberman

Finally, they tested whether callused and un-callused people walk differently, or if these foot abrasions change a person’s gait or manner of walking in the same way that shoes do. The participants walked over a platform that could measure the impact of their footsteps.

The group returned to Boston and searched for a second study population.

“There is a barefoot community near Boston,” Holowka said, “but they’re hard to recruit.”

Still, the researchers found a group of seven habitually barefoot people along with 15 shoe-wearing people for a follow-up experiment.

The Boston participants each walked across the impact-measuring platform in cushioned shoes, thin-soled shoes and bare feet to see if the amount of force they transmitted changed based on their footwear.

As expected, thicker calluses developed on people who usually walked barefoot, and those calluses were more protective than the thinner skin of shoe wearers.

But less intuitively, as calluses grew thicker, the participants didn’t lose sensitivity to touch on the soles of their feet. That meant they could feel whether the ground was slippery or rough, uneven or smooth — sensations that are lost when we replace calluses with shoes. 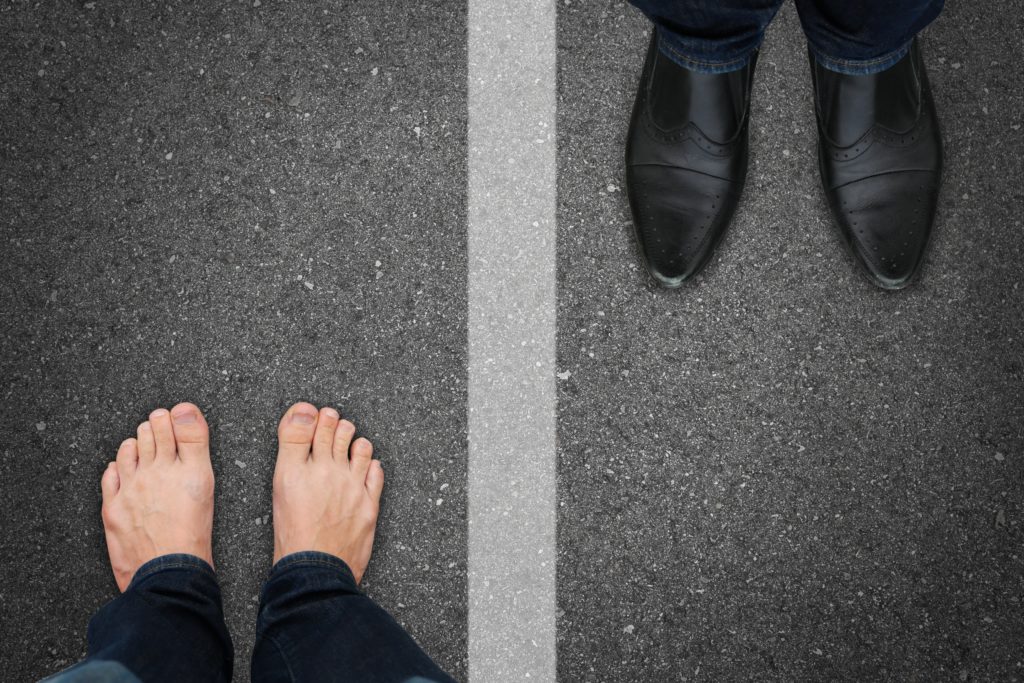 Some people in the study wear shoes to protect their feet from temperature, parasites or abrasion. Others go barefoot, by choice or economic necessity. Image by WoGi/Adobe

That retention of sensitivity can be explained with simple physics, Holowka said: “[A callus] is essentially a stiff layer of skin, so pressure is transmitted through it without being dampened.”

The researchers think that the preservation of touch explains why people with and without thick calluses walk with a similar gait when barefoot.

But people with both callused and un-callused feet change their gait while wearing cushioned shoes, altering the forces transmitted into their bones and joints. In shoes, all participants experienced less of an initial jolt, but more force in the long run — force that our bodies didn’t evolve to handle.

“At this time we’re not sure what the consequences of this are,” said Holowka. On a hard surface it’s more comfortable to walk in a cushioned shoe, he added, but the team doesn’t know whether a change in gait could damage a person’s body in the long run.

What they didn’t study was the transmission of pain in the foot. For ethical reasons, the research team didn’t want to cause pain or injury to their study participants, so they didn’t draw any conclusions on whether thick calluses dampened that kind of sensation.

This study doesn’t mean everyone should stop wearing shoes.

Osteoarthritis is on the rise, and research suggests that while obesity has been blamed for the increase in joint inflammation, it may not be the sole cause. Shoes could be a part of the story. Flat-footedness, plantar fasciitis and back pain could all implicate modern shoes, too.

This makes sense, said François-Xavier Li, a sports scientist from the University of Birmingham in the United Kingdom who was not involved in the study.

In the human foot, Li said, “there are roughly 18 muscles, 26 bones and five nerves — it’s a really complex system.” The process of natural selection wouldn’t likely have preserved such a complex system, calluses and all, if it didn’t make a compelling contribution to our survival, he said. Our feet must be more important than we’ve given them credit for.

Both Li and Holowka warn, though, that this study doesn’t mean everyone should stop wearing shoes.

“When barefoot running became popular, people jumped two feet in, no pun intended, and then they got injured. Being barefoot is not a panacea for everything,” Li said. Shoes protect skin from infections and abrasions, and cushion foot bones that are unused to the stress of sustained barefoot walking and running.

Instead, Li thinks the new study’s final recommendations are sound: more research on thin-soled shoes like sandals or moccasins for athletes, people with nerve damage and aging people who could use a boost to their balance.

“There are quite a lot of papers showing that essentially when you wear shoes, you’re less careful and you land more heavily,” Li said. “If the shoes were really absorbing all of that impact, we should be happy to jump on our heads with shoes on our heads… and we’re not.”

Left: Humans evolved to walk barefoot and develop calluses that would protect our feet. Now, many of us walk in cushioned shoes and never develop those calluses. Image by annuoka/Adobe