MOSCOW (AP) — As Russian troops were closing in on the Ukrainian capital, more and more Russians spoke out Saturday against the invasion, even as the government’s official rhetoric grew increasingly harsher.

Street protests, albeit small, resumed in the Russian capital of Moscow, the second-largest city of St. Petersburg and other Russian cities for the third straight day, with people taking to the streets despite mass detentions on Thursday and Friday. According to OVD-Info, rights group that tracks political arrests, at least 460 people in 34 cities were detained over anti-war protests on Saturday, including over 200 in Moscow.

Open letters condemning Russia’s invasion of Ukraine kept pouring, too. More than 6,000 medical workers put their names under one on Saturday; over 3,400 architects and engineers endorsed another while 500 teachers signed a third one. Similar letters by journalists, municipal council members, cultural figures and other professional groups have been making the rounds since Thursday.

READ MORE: What to know as Russian forces target Ukraine’s capital of Kyiv

A prominent contemporary art museum in Moscow called Garage announced Saturday it was halting its work on exhibitions and postponing them “until the human and political tragedy that is unfolding in Ukraine has ceased.”

“We cannot support the illusion of normality when such events are taking place,” the statement by the museum read. “We see ourselves as part of a wider world that is not divided by war.”

An online petition to stop the attack on Ukraine, launched shortly after it started on Thursday morning, garnered over 780,000 signatures by Saturday evening, making it one of the most supported online petitions in Russia in recent years.

Statements decrying the invasion even came from some parliament members, who earlier this week voted to recognize the independence of two separatist regions in eastern Ukraine, a move that preceded the Russian assault. Two lawmakers from the Communist Party, which usually toes the Kremlin’s line, spoke out against the hostilities on social media.

Oleg Smolin said he “was shocked” when the attack started and “was convinced that military force should be used in politics only as a last resort.” His fellow lawmaker Mikhail Matveyev said “the war must be immediately stopped” and that he voted for “Russia becoming a shield against the bombing of Donbas, not for the bombing of Kyiv.”

Russian authorities, meanwhile, took a harsher stance towards those denouncing the invasion, both at home and abroad.

Dmitry Medvedev, the deputy head of Russia’s Security Council chaired by President Vladimir Putin, said Moscow may respond to Western sanctions by opting out of the last nuclear arms deal with the U.S., cutting diplomatic ties with Western nations and freezing their assets.

He also warned that Moscow could restore the death penalty after Russia was removed from Europe’s top rights group — a chilling statement that shocked human rights activists in a country that has had a moratorium on capital punishment since August 1996.

Eva Merkacheva, a member of the Kremlin human rights council, deplored it as a “catastrophe” and a “return to the Middle Ages.”

The Western sanctions imposed new tight restrictions on Russian financial operations, a draconian ban on technology exports to Russia and froze the assets of Putin and his foreign minister. Russian membership in the Council of Europe was also suspended.

Washington and its allies say even tougher sanctions are possible, including kicking Russia out of SWIFT, the dominant system for global financial transactions.

Medvedev was a placeholder president in 2008-2012 when Putin had to shift into the prime minister’s seat because of term limits. He then let Putin reclaim the presidency and served as his prime minister for eight years.

During his tenure as president, Medvedev was widely seen as more liberal compared with Putin, but on Saturday he made a series of threats that even the most hawkish Kremlin figures haven’t mentioned to date.

Medvedev noted that the sanctions offer the Kremlin a pretext to completely review its ties with the West, suggesting that Russia could opt out of the New START nuclear arms control treaty that limits the U.S. and Russian nuclear arsenals. 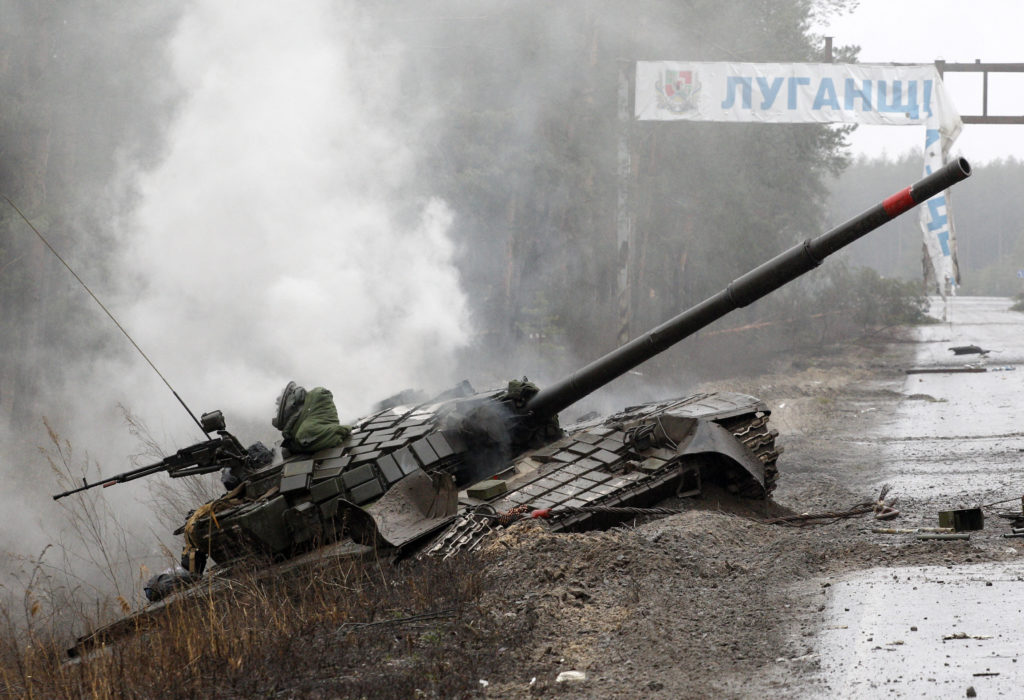 Smoke rises from a Russian tank destroyed by the Ukrainian forces on the side of a road in Lugansk region on February 26, 2022. Photo by ANATOLII STEPANOV/AFP via Getty Images.

The treaty, which Medvedev signed in 2010 with then-U.S. President Barack Obama, limits each country to no more than 1,550 deployed nuclear warheads and 700 deployed missiles and bombers, and envisages sweeping on-site inspections to verify compliance. The pact, the last remaining U.S.-Russian nuclear arms control agreement, had been set to expire in February 2021 but Moscow and Washington extended it for another five years.

WATCH: ‘Russia has to pay a high price,’ NATO’s Stoltenberg says of the war in Ukraine

If Russia opts out of the agreement now, it will remove any checks on U.S. and Russian nuclear forces and raise new threats to global security.

Medvedev also raised the prospect of cutting diplomatic ties with Western countries, charging that “there is no particular need in maintaining diplomatic relations.” Referring to Western threats to freeze the assets of Russian companies and individuals, Medvedev warned that Moscow wouldn’t hesitate to do the same.

Cracking down on critics at home, Russian authorities demanded that top independent news outlets take down stories about the fighting in Ukraine that deviated from the official government line.

Russia’s state communications watchdog, Roskomnadzor, charged that reports about “Russian armed forces firing at Ukrainian cities and the death of civilians in Ukraine as a result of the actions of the Russian army, as well as materials in which the ongoing operation is called ‘an attack,’ ‘an invasion,’ or ‘a declaration of war’” were untrue and demanded that the outlets take them down or face steep fines and restrictions.

On Friday, the watchdog also announced “partial restrictions” on access to Facebook in response to the platform limiting the accounts of several Kremlin-backed media.

On Saturday, Russian internet users reported problems with accessing Facebook and Twitter, both of which have played a major role in amplifying dissent in Russia in recent years.

Left: The police detain a demonstrator during an unsanctioned anti-war protest in Pushkin Square in central Moscow. Photo by Sergei SavostyanovTASS via Getty Images.