BRUSSELS — The leaders of Germany, France and about a dozen other European Union nations are converging on Brussels for an afternoon of informal talks on differences over migration ahead of a full EU summit that starts next Thursday.

There are deep divisions over who should take responsibility for arriving migrants, how long they should be required to accommodate them, and what should be done to help those EU countries hardest hit like Italy and Greece.

Facing a domestic political crisis in Germany over the topic, Chancellor Angela Merkel will be seeking to get EU leaders to forge a joint approach to manage the influx of migrants and refugees, a divisive issue which is now back at the heart of the EU too.

There are deep divisions over who should take responsibility for arriving migrants, how long they should be required to accommodate them, and what should be done to help those EU countries hardest hit like Italy and Greece.

Italy’s populist 5-Star Movement demanded Sunday that European countries step up and actually take action to deal with hundreds of thousands of migrants on the continent. The 5-Stars, who are in a ruling coalition with the anti-migrant League party, penned a blog titled “The migrant hypocrisy sinks Europe.”

“It’s time for Europe to find itself again in the principles that everyone preaches, but few sincerely practice,” the party said, adding “the future of Europe as a political community” is at stake.

Looking for common ground among a few key nations, the informal mini-summit now involves about 16 member states, as others demanded to take part.

And to further complicate matters, four eastern EU countries — the Czech Republic, Hungary, Poland and Slovakia — refused to attend and reject taking in migrants in general. It means that whatever is agreed upon Sunday, it would still face a full test when the full two-day EU summit starts Thursday.

Two issues have brought the crisis back to haunt the leaders: In Germany, Christian Democrat coalition partners CDU and CSU are haggling over the right approach in what is seen as one of the toughest challenges Merkel has faced in her entire political career.

In Italy, the new populist government caused a fight with Malta and France over who should take responsibility for 630 people rescued from the Mediterranean Sea off the coast of Libya, the main departure point for people trying to reach Europe. Amid the mud-slinging, Spain’s new Socialist government agreed to take charge of the migrants last weekend.

On Saturday, Spain also announced it had rescued 569 more migrants at sea, many from boats in the Strait of Gibraltar, a busy shipping lane with treacherous currents. 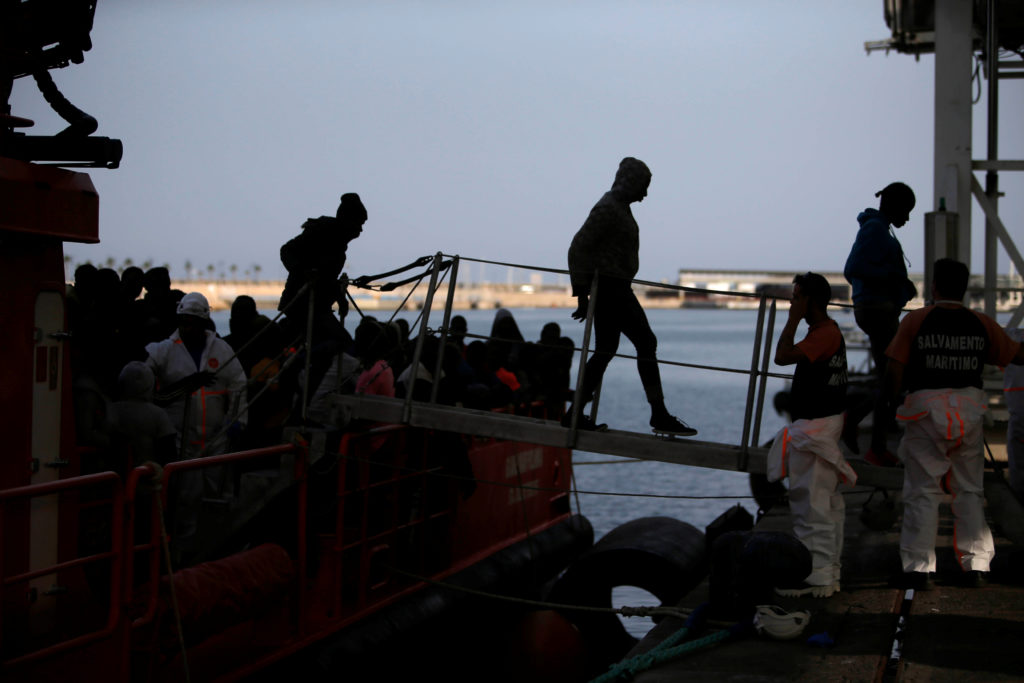 Migrants, part of a group intercepted aboard dinghies off the coast in the Mediterranean Sea, leave a rescue boat upon arrival at the port of Malaga, Spain, on June 23, 2018. Photo by Jon Nazca/Reuters

But Italy and Malta were at it again Saturday, refusing to let a German rescue ship with 234 migrants dock. The German aid group said a cargo vessel, the Alexander Maersk, had another 113 migrants and was also waiting for a port to receive them.

One of the key accomplishments of the EU is the Schengen free travel zone and some fear that closing internal borders between EU nations to keep migrants out would undermine that cornerstone of EU cooperation.

“We want to have real controls at the external borders to make sure we can safeguard the free travel zone of Schengen,” said Belgian Prime Minister Charles Michel.