‘It’s been such a long time since I’ve seen a flower’: Life in a Syrian refugee camp

AMMAN, Jordan — Mohammed al Hari lost part of his leg in 2013 while trying to move his family away from Syria’s ongoing civil war. He was hit by shrapnel when his hometown Daraa came under siege and his leg had to be amputated.

A year later, al Hari, his wife Asmaa and their children escaped successfully, bringing only the clothes on their backs across the desert terrain. They met a Bedouin family, who took them in for the night, gave them a meal and drove them to the Jordanian border.

They crossed into Jordan and settled in the rural community of Azraq, about 60 miles east of Amman, a town of 60,000 with a growing Syrian population. 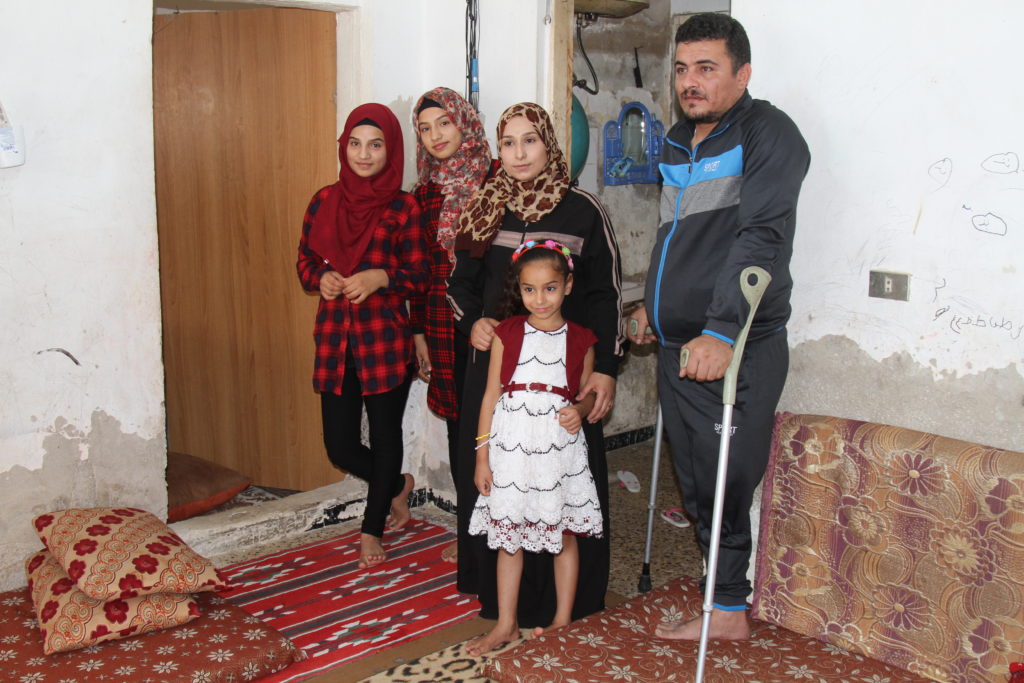 “Even if there’s war, but my village is safe, I would go back” to Syria, said Mohammed al Hari (right) with his wife Asmaa and three of their daughters, (from left) Walaa, 15, Safaa, 17, and Ayatalruhman, 7. Photo by Larisa Epatko/PBS NewsHour

Today, al Hari helps manage a coffee shop. His 13-year-old son Nasr al Deen does what his father’s legs can’t. When someone pulls up in a car and shouts his coffee order, Naser runs it out.

“I couldn’t work without him,” al Hari says.

Since the war began, Jordan has taken in about 666,100 Syrian refugees, but the Jordanian government estimates the number is actually double, including those who have not registered with the U.N. refugee agency. The U.N. Global Trends report released Tuesday says Syria is still the source of most refugees. Syrians account for 6.3 million of the total 68.5 million refugees who have been displaced from their homes as of the end of 2017. 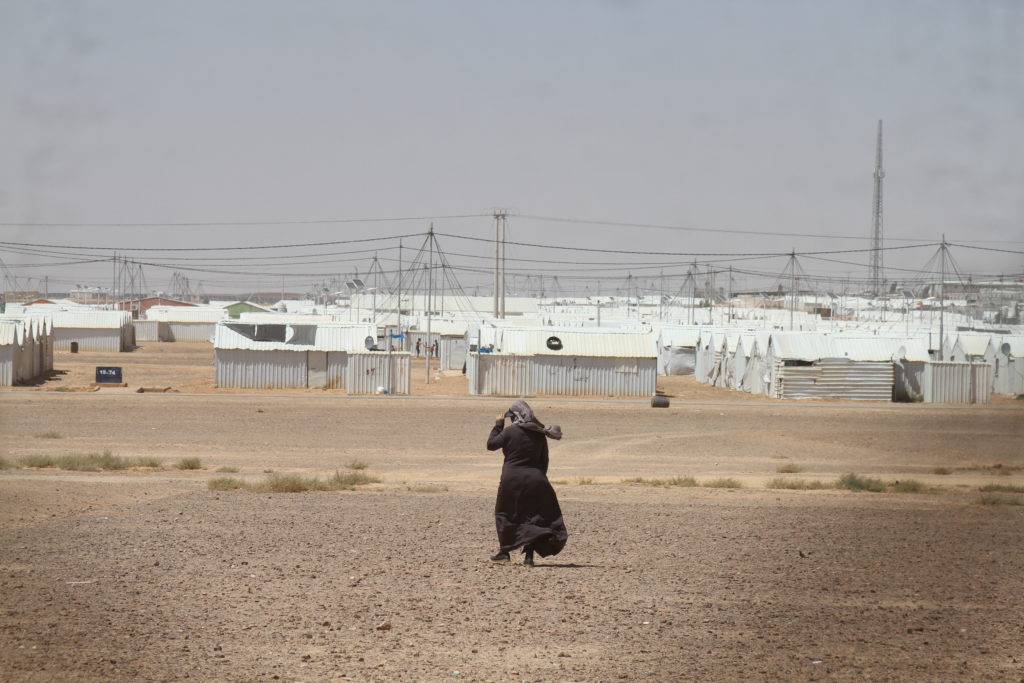 The corrugated metal shelters lined in rows are partitioned into villages in Azraq camp. Photo by Larisa Epatko/PBS NewsHour

Near the town of Azraq, the U.N. High Commissioner for Refugees operates a refugee camp that goes by the same name, home to 50,000 Syrians who made journeys like al Hari’s. Rows of white corrugated metal huts are partitioned into villages and powered by solar panels. The camp has helped accommodate the overflow of migrants from the Zaatari camp, which is closer to the Syrian border and now houses about 83,000 refugees.

The influx of Syrians has increased tensions over jobs. The Syrians are willing to work for lower wages, said Nouf Fayez, who runs the international nonprofit CARE’s community center in the town of Azraq, which means they are more likely to find employment. That’s frustrated Jordanians, who feel they are being passed over for work. In response, nongovernmental organizations like CARE include both Jordanians and Syrians in their aid programs, such as providing vocational training to start home businesses like cooking and sewing.

To accommodate the growing Syrian youth population in Azraq, the Jordanian government runs the school day in shifts. Jordanians go to school in the morning, and Syrians attend for two hours in the afternoon. 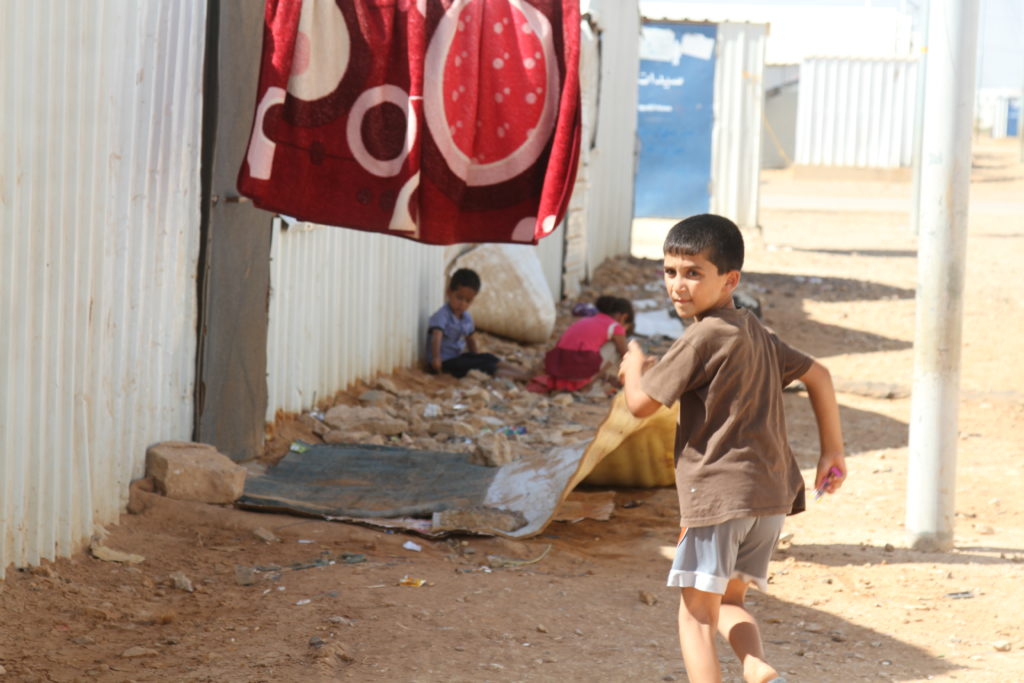 Jordan has the third most refugees from Syria, after Turkey and Lebanon. Photo by Larisa Epatko/PBS NewsHour

“The hardest part about being in the camp is the shock of seeing the desert,” Rayan said through an interpreter. “It’s been such a long time since I’ve seen a flower. In Syria, it’s so green and there are flowers everywhere.”

Still, Zainab said she and her sister get to learn new things, like taekwondo. The girls’ brother, who enrolled in the classes first, convinced their mother to let the girls learn, too, Rayan said. His reasoning: “If another war breaks out, they have to defend themselves.” 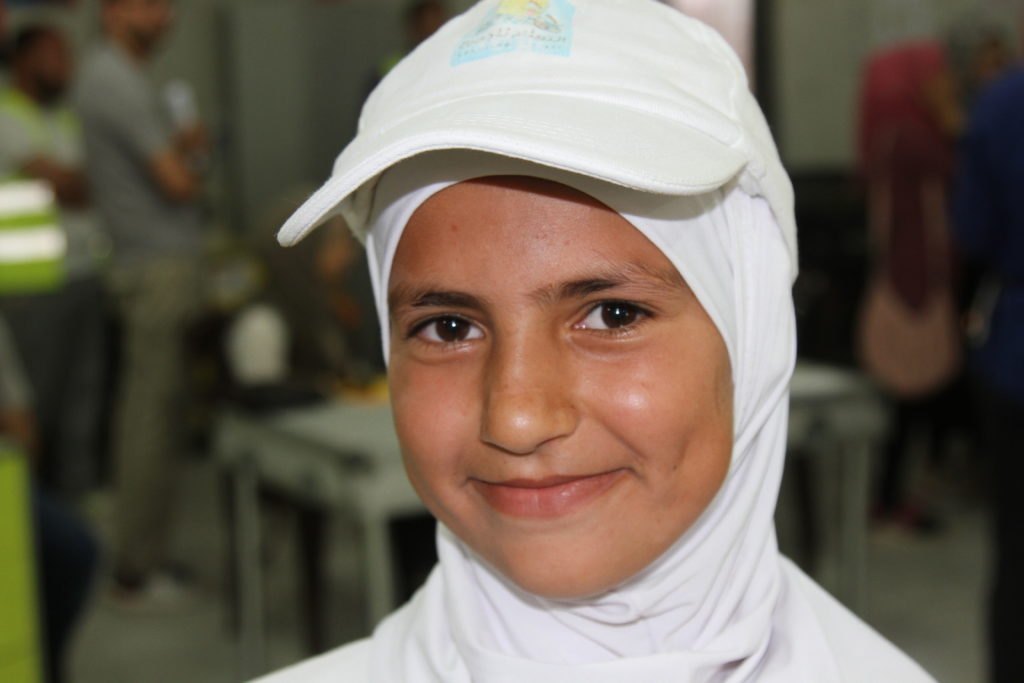 The girls demonstrate what they’ve learned by breaking a plywood board in half with a powerful kick.

Another member of the taekwondo team is Wael, 16, who came to the camp at age 12 from the Syrian city of Homs. He earned his black belt in the sport and aspires to compete on the refugee team in the 2020 Olympics.

“I want to meet other champions and be just like them,” he said through an interpreter. “The biggest loss was the loss of my country, but everything else I’m working to get back.”