Firefighters winched from helicopters to reach the cluster of fewer than 200 Wollemi Pines in a remote gorge in the Blue Mountains a week before a massive wildlife bore down, National Parks and Wildlife Service Director David Crust said.

The firefighters set up an irrigation system to keep the so-called dinosaur trees moist and pumped water daily from the gorge as the blaze that had burned out of control for more than two month edged closer.

“That helped just to slow the intensity of the fire as it approached the site,” Crust told Australian Broadcasting Corp.

“The Wollemi Pine is a particularly important species and the fact that this is the only place in the world where they exist and they exist in such small numbers is really significant,” he added. 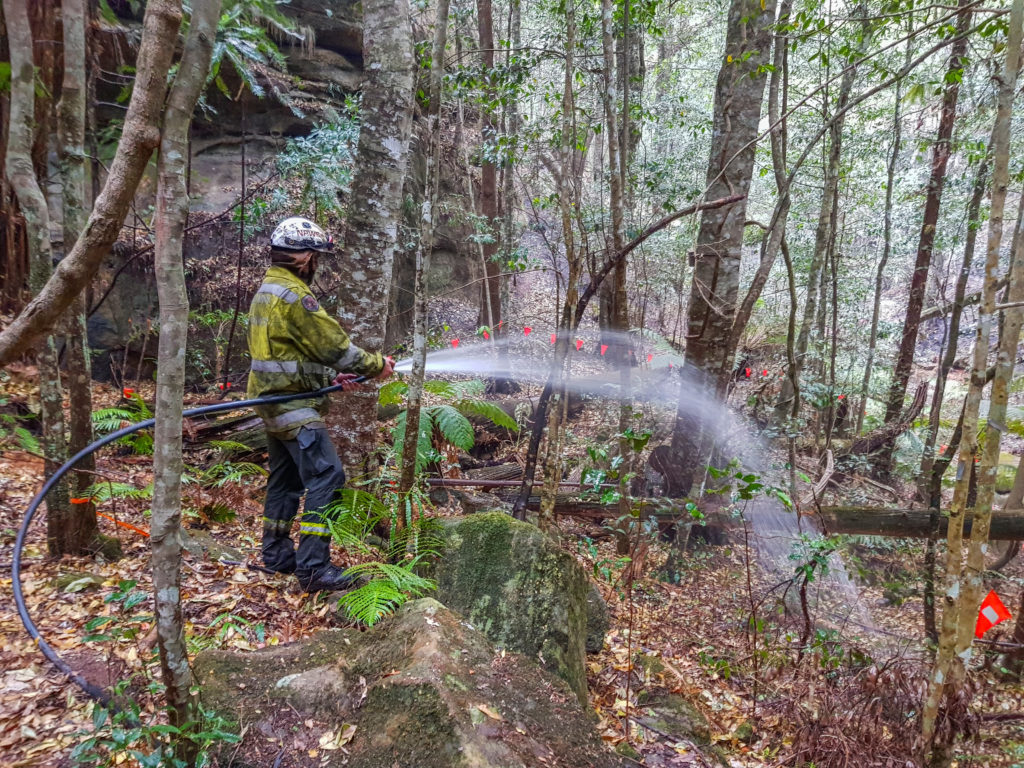 A member of the specialist team of remote-area firefighters and parks staff sprays water on an area with endangered Wollemi Pines to protect them from bushfires at Wollemi National Park, New South Wales, Australia mid-January 2020. NSW NPWS/Handout via Reuters

New South Wales state Environment Minister Matt Kean said the operation had saved the stand, although some plants had been singed.

“These pines outlived the dinosaurs, so when we saw the fire approaching we realized we had to do everything we could to save them,” Kean said.

The Wollemi Pine had only been seen in its fossilized form and was thought long extinct before the stand was found in 1994.

The fire that threatened it was brought under control this week after razing more than 510,000 hectares (1.26 million acres). The fire also destroyed 90% of the 5,000-hectare (12,400-acre) Wollemi National Park, where the rare trees grow, Crust said.

READ MORE: How to help the victims of Australia’s wildfires

The exact location of the stand remains a closely guarded secret to help authorities protect the trees.

The Wollemi’s survival is one of the few positive stories to emerge from the unprecedented wildlife crisis in southeast Australia.

The fires have claimed at least 28 lives since September, destroyed more than 2,600 homes and razed more than 10.3 million hectares (25.5 million acres), mostly in New South Wales state. The area burned is larger than the U.S. state of Indiana.

But the fire danger has been diminished by rain this week in several areas. The first green buds of regrowth have already emerged in some blacked forests following rain.