Beirut braces for more violence, after night of riots

Security forces, including Lebanese military, were heavily deployed across downtown Beirut after the worst violence since the unrest erupted three months ago. They spent the day reinforcing concrete barriers and stringing coils of razor wire across main thoroughfares, ahead of calls from protesters for more rallies.

Lebanon’s public prosecutor ordered Sunday the release of 34 people detained in clashes between security forces and anti-government protesters that wounded hundreds in the capital the previous night.

The public prosecutor said all those detained during the riots would be released except those with other pending cases, the official National State News agency reported.

At least 377 people were injured in Saturday’s clashes, according to the Red Cross and the Lebanese Civil Defense. More than 120 of those were treated in hospitals, including a protester who sustained an eye injury, as well as security force members. Lebanon’s Internal Security Forces said 142 of its members were injured, including 7 officers, some with serious concussions.

The clashes took place amid a rapidly worsening financial crisis and an ongoing impasse over the formation of a new government. The Cabinet headed by Prime Minister Saad Hariri resigned in late October.

Security forces and the military were girding themselves for more violence, following protester calls for more rallies on Sunday. 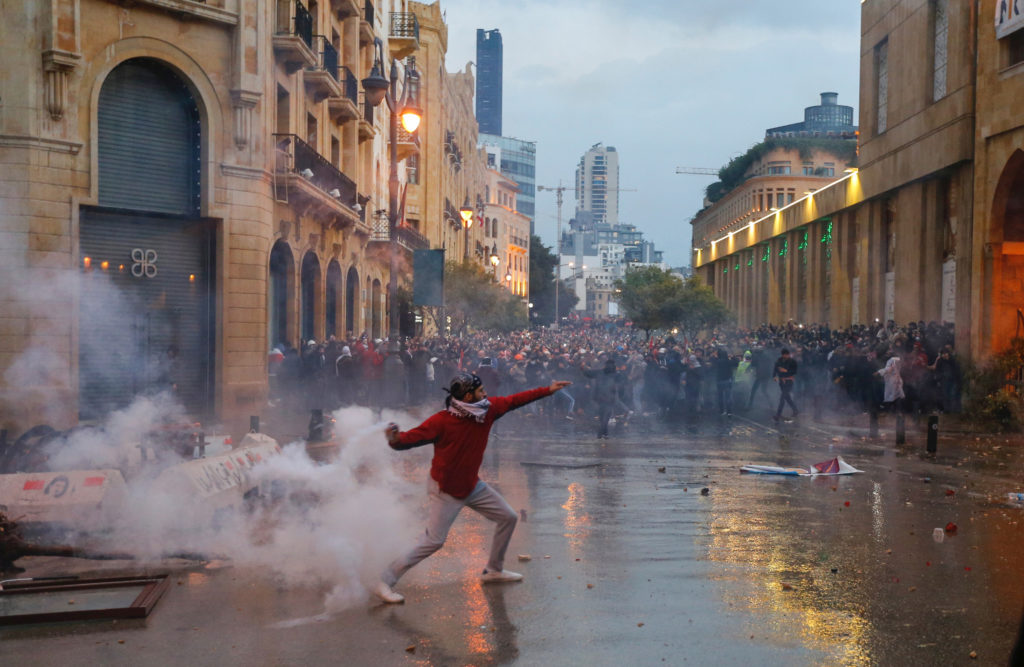 A demonstrator throws a tear gas canister during a protest against a ruling elite accused of steering Lebanon towards economic crisis in Beirut, Lebanon January 18, 2020. Photo by Mohamed Azakir/Reuters.

Government forces blocked access to some buildings in central Beirut with razor wire, closing off access to areas that included a popular tourist site. Workers also welded fencing together across roadways that lead to Parliament to make it harder for demonstrators to push through.

On the quiet, rainy streets Sunday, shopkeepers, banks and other businesses swept up broken glass and boarded up windows. Workers at one bank took down the large sign with its name to remove any identifier and avoid soliciting anger from protesters, who smashed the windows and the facade of Lebanon’s Banking Association headquarters with metal bars the previous night. The demonstrators widely blame Lebanese financial institutions, alongside government corruption, for the crippling economic crisis.

Nearby soot and ashes still littered the ground where security forces burned the tents of the protesters’ sit-in during the chaotic melee.

Riot police had fired volleys of tear gas and rubber bullets late into the night Saturday to disperse the thousands of demonstrators. The protesters, who came from the country’s north, east and the capital itself, clubbed security forces with tree branches and metal bars and fired flares and fireworks, while lobbing stones and other projectiles at them.

The clashes also took place on the steps of a mosque downtown. The top Muslim Sunni Fatwa office called it “inappropriate” and said protesters had taken refuge inside the mosque and were taken care of.

The pitched street battles lasted for nearly nine hours, with both protesters and the government trading blame for the violence.

Interior Minister Raya El Hassan said that security forces were ordered to protect peaceful protests. “But for the protests to turn into a blatant attack on the security forces, public and private properties, this is condemned and totally unacceptable,” she tweeted Saturday.

However, Human Rights Watch described the security force response as “brutal” and called for an urgent end to a “culture of impunity” for police abuse.

“There was no justification for the brutal use of force unleashed by Lebanon’s riot police against largely peaceful demonstrators in downtown Beirut,” said Michael Page, deputy Middle East director at HRW. “Riot police showed a blatant disregard for their human rights obligations, instead launching teargas canisters at protesters’ heads, firing rubber bullets in their eyes and attacking people at hospitals and a mosque.”

The protesters have been rallying against the country’s political elite who have ruled Lebanon since the end of the 1975-90 civil war. They blame politicians for widespread corruption and mismanagement in a country that has accumulated one of the largest debt ratios in the world.

Panic and anger have gripped the public as their local currency, pegged to the dollar for more than two decades, plummeted. The Lebanese pound lost more than 60% of its value in recent weeks on the black market. The economy has seen no growth and foreign inflows dried up in the already heavily indebted country that relies on imports for most of its basic goods.

Prime Minister-designate Hassan Diab had been expected to announce an 18-member Cabinet on Friday, but last minute disputes among political factions scuttled his latest attempt.

Left: Fireworks are set off in front of police officers standing in position behind riot shields during a protest against a ruling elite accused of steering Lebanon towards economic crisis in Beirut, Lebanon January 18, 2020. Photo by Mohamed Azakir/Reuters.