BERLIN — Thousands of people rallied across Australia to honor George Floyd and voice their support for the Black Lives Matter movement Saturday, part of a worldwide wave of solidarity that has also sought to highlight racial discrimination outside the United States.

Further protests were planned over the weekend in European cities, some defying restrictions imposed by authorities because of the coronavirus pandemic.

In Sydney, protesters won a last-minute appeal against a Friday ruling declaring their rally unauthorized. The New South Wales Court of Appeal gave the green light just 12 minutes before the rally was scheduled to start, meaning those taking part could not be arrested.

Up to 1,000 protesters had already gathered in the Town Hall area of downtown Sydney ahead of the decision.

Floyd, a black man, died in handcuffs on May 25 while a Minneapolis police officer pressed a knee on his neck even after he pleaded for air and stopped moving.

His death has struck a chord with minorities protesting discrimination elsewhere, including deaths of indigenous Australians in custody.

In Sydney, there was one early scuffle when police removed a man who appeared to be a counter protester carrying a sign reading, “White Lives, Black Lives, All Lives Matter.”

The rally appeared orderly as police handed out masks to protesters and other officials provided hand sanitizer.

“If we don’t die from the (coronavirus) pandemic, then we will die from police brutality,” Sadique, who has a West African background and said he goes by only one name, said in Sydney. 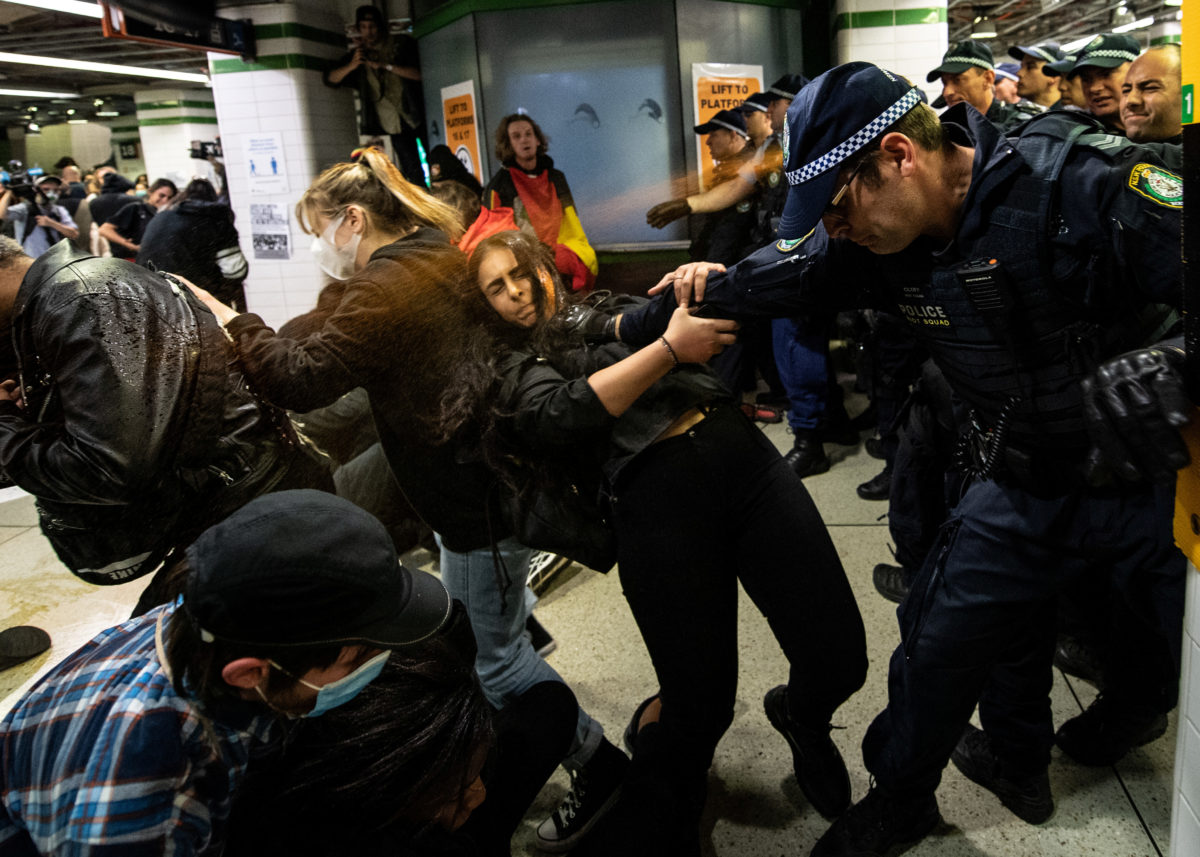 Bob Jones, 75, said it was worth the risk to rally for change despite the state’s chief health officer saying the event could help spread the coronavirus.

“If a society is not worth preserving, then what are you doing? You’re perpetuating a nonsense,” Jones said.

In Brisbane, the Queensland state capital, organizers said about 30,000 people gathered, forcing police to shut down some major downtown streets. The protesters demanded to have Australia’s Indigenous flag raised at the police station.

Indigenous Australians make up 2% of the the country’s adult population, but 27% of the prison population. They are also the most disadvantaged ethnic minority in Australia and have higher-than-average rates of infant mortality and poor health, as well as shorter life expectancies and lower levels of education and employment than other Australians.

Wearing masks and black shirts, dozens of demonstrators marched through a commercial district amid a police escort, carrying signs such as “George Floyd Rest in Peace” and “Koreans for Black Lives Matter.”

“I urge the U.S. government to stop the violent suppression of (U.S.) protesters and listen to their voices,” said Jihoon Shim, one of the rally’s organizers. “I also want to urge the South Korean government to show its support for their fight (against racism).”

In Tokyo, dozens of people gathered in a peaceful protest.

“Even if we are far apart, we learn of everything instantly on social media,”

“Can we really dismiss it all as irrelevant?” Taichi Hirano, one of the organizers, shouted to the crowd gathered outside Tokyo’s Shibuya train station. He stressed that Japanese are joining others raising their voices against what he called “systematic discrimination.”

In Paris, police banned a protest planned for Saturday, citing the risk of spreading COVID-19 and fears of public unrest. The police decree noted that social distancing regulations ban gatherings of more than 10 people.

Preparing for the eventuality that protesters would ignore the ban, French police sealed off roads around the U.S. Embassy early Saturday.

The British government urged people not to gather in large numbers and police have warned that mass demonstrations could be unlawful.

Though the demonstrations — such as one planned Saturday on Parliament Square in central London — have not been banned directly, they could fall foul of lockdown restrictions. In England, for example, gatherings of more than six people are not permitted. That restriction didn’t stop thousands gathering on Wednesday in a largely peaceful protest in central London over Floyd’s death.

“The reason that it is vital that people stick to the rules this weekend is to protect themselves and their family from this horrific disease,” British Health Secretary Matt Hancock said.

“So please, for the safety of your loved ones, do not attend large gatherings including demonstrations of more than six people.”

In Berlin, where a Black Lives Matter rally was scheduled for Saturday afternoon, police said several store windows were smashed overnight and walls were painted with slogans referring to George Floyd’s death.

Another graffiti read: “No justice, no peace.”

Left: People wearing masks hold placards during a protest march over the alleged police abuse of a Turkish man, in echoes of a Black Lives Matter protest, following the death of George Floyd who died in police custody in Minneapolis, in Tokyo, Japan June 6, 2020. Photo by Issei Kato/Reuters.