Crime drops around the world as COVID-19 keeps people inside

CHICAGO — The coronavirus pandemic that has crippled big-box retailers and mom and pop shops worldwide may be making a dent in illicit business, too.

In Chicago, one of America’s most violent cities, drug arrests have plummeted 42% in the weeks since the city shut down, compared with the same period last year. Part of that decrease, some criminal lawyers say, is that drug dealers have no choice but to wait out the economic slump.

“The feedback I’m getting is that they aren’t able to move, to sell anything anywhere,” said Joseph Lopez, a criminal lawyer in Chicago who represents reputed drug dealers.

Overall, Chicago’s crime declined 10% after the pandemic struck, a trend playing out globally as cities report stunning crime drops in the weeks since measures were put into place to slow the spread of the virus. Even among regions that have the highest levels of violence outside a war zone, fewer people are being killed and fewer robberies are taking place.

Still, law enforcement officials worry about a surge of unreported domestic violence, and what happens when restrictions lift — or go on too long.

It’s rare for a city to see a double-digit drop in crime, even over a much longer period. During New York City’s 1990s crime decline, one of the biggest turnarounds in American history, crime dropped about 40% over three years. That makes the drop-offs occurring now — in a period of just a couple of weeks — even more seismic.

Across Latin America, crime is down to levels unseen in decades.

“Killings are down, and the gangsters aren’t harassing so much,’’ Eduardo Perdomo, a 47-year-old construction worker, said while getting off a bus in San Salvador. “I think they’re afraid of catching the virus, and they aren’t going out.’’ 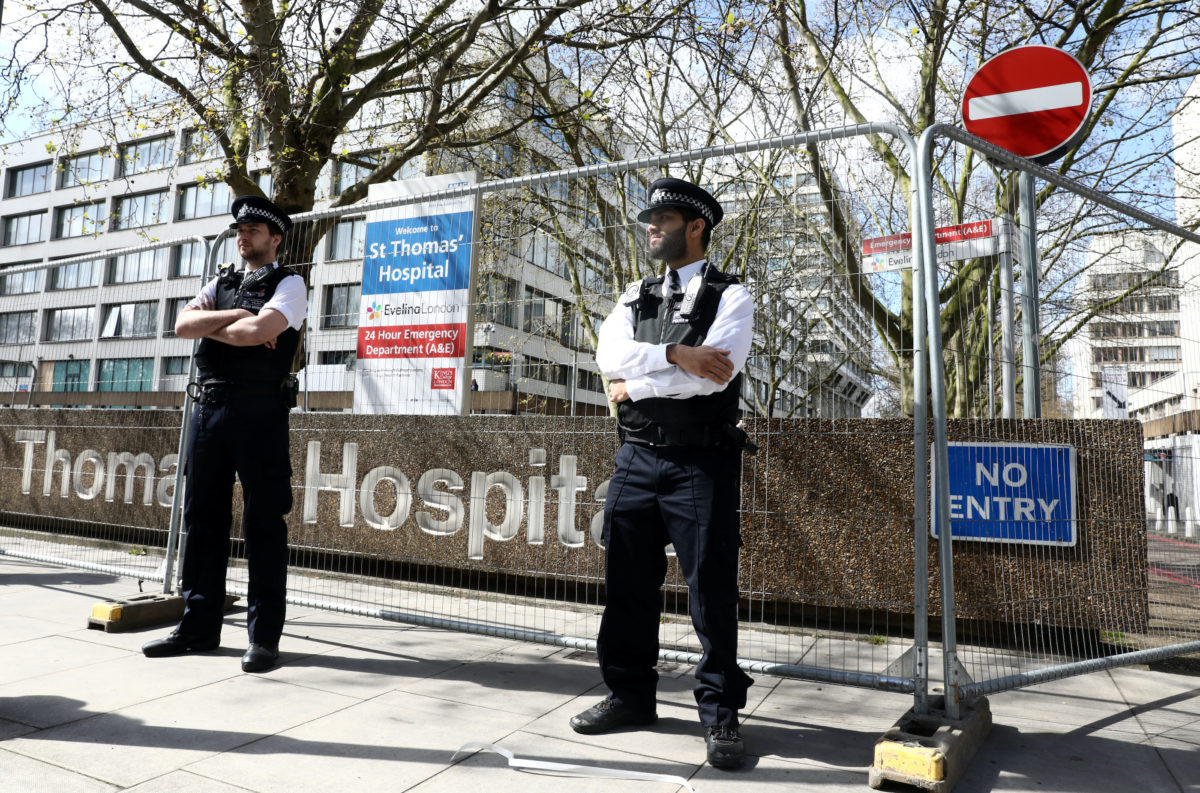 El Salvador reported an average of two killings a day last month, down from a peak of 600 a day a few years ago.

Much of the decrease has taken place because of tougher security policies and gang truces. But the imposition of near-total limits on movement is likely driving it down further, according to analysts and national statistics.

In Peru, where crime levels fell 84% last month, Lima mortician Raúl González usually has as many as 15 bodies a day — many are homicide victims. This week he napped on a bench after six hours without a client.

“There are almost no killings or car accidents these days,’’ González said.

In South Africa, police reported a stunning decline during their first week of lockdown measures. Police Minister Bheki Cele said reported rapes were down from 700 to 101 over the same period last year. Serious assault cases plummeted from 2,673 to 456, and murders fell from 326 to 94.

The U.S. virus epicenter in New York saw major crimes — murder, rape, robbery, burglary, assault, grand larceny and car theft — decrease by 12% from February to March. In Los Angeles, 2020 key crimes statistics were consistent with last year’s figures until the week of March 15, when they dropped by 30%.

“There’s a lot fewer opportunities for criminals to take advantage of,” said Joe Giacalone, a former New York Police Department sergeant who now teaches at John Jay College of Criminal Justice. “Most burglars, they wait for you to leave the house.”

Policing has also changed in the face of the pandemic. Officers are increasingly getting sick; the NYPD, the country’s largest department with more than 36,000 officers, has more than 7,000 officers out and more than 2,000 diagnosed with COVID-19.

And U.S. authorities say they’re issuing citations instead of making low-level arrests, policing social distancing and putting detectives into patrol cars — which could, in turn, bring down crime rates.

“In many respects, over the next weeks, they’re really in survival mode,” he said. 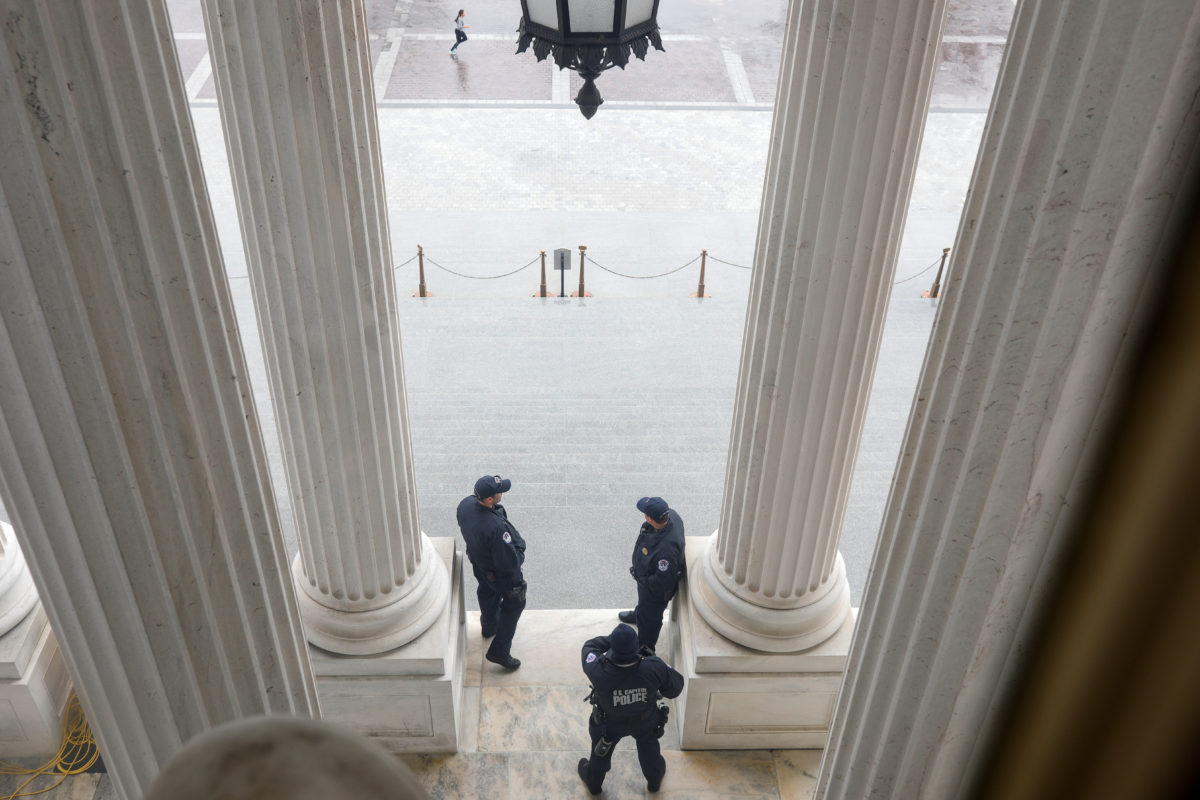 U.S. Capitol Police officers stand atop of the Senate stairway, ahead of a vote on the coronavirus relief bill, on Capitol Hill on March 25, 2020. Photo by REUTERS/Tom Brenner

But while narcotics arrests are down, drug sales continue, with dealers likely forced to change their strategies, said Rodney Phillips, a former gang member in Chicago who now works as a conflict mediator in the city.

“These guys already face poverty and death in these areas,” he said. “They might be selling more online now. But they aren’t going to give up just because of the coronavirus.”

A Maryland man accused of operating a Darknet store selling prescription opioids boasted on his vendor page: “Even with Corona Virus the shop is running at full speed.”

He told an undercover FBI agent he was just waiting for a shipment because “this corona virus (sic) is (expletive) up inventory,” according to court documents.

Other crimes, however, may be fueled by shutdown orders.

Houston Police Chief Art Acevedo said the city’s aggravated assaults were up 10% in the last three weeks, and half of those were domestic violence, a significantly higher proportion than normal. Calls to Missouri’s child abuse and neglect hotline dropped by half as the virus first struck the state. Advocates said the calls aren’t made because the kids aren’t in school.

And Chicago did see a spike in gun violence this week, according to the Chicago Sun-Times, which reported 60 shootings — 19 fatal — between Sunday and Thursday.

San Jose, California, Police Chief Eddie Garcia hopes the downward trend will continue after the pandemic is over. But his officers are preparing for the worst.

“The longer we’re in a lockdown,” he said, “the more we’re playing with fire.”

For most people, the coronavirus causes mild or moderate symptoms, such as fever and cough. But for others, especially older adults and people with health problems, it can cause severe symptoms like pneumonia. More than 1.5 million cases have been diagnosed worldwide.

Left: Mounted police patrol at Via dei Condotti street, as the spread of the coronavirus disease (COVID-19) continues, in Rome, Italy April 10, 2020. Photo by Alberto Lingria/Reuters.