MADRID — A divided Spain voted Sunday in its third general election in four years, with all eyes on whether a far-right party will enter Parliament for the first time in decades and potentially help unseat the Socialist government.

The incumbent prime minister, Pedro Sánchez, is set to win the most votes, but his Socialists seem far from scoring a majority in parliament to form a government on their own. 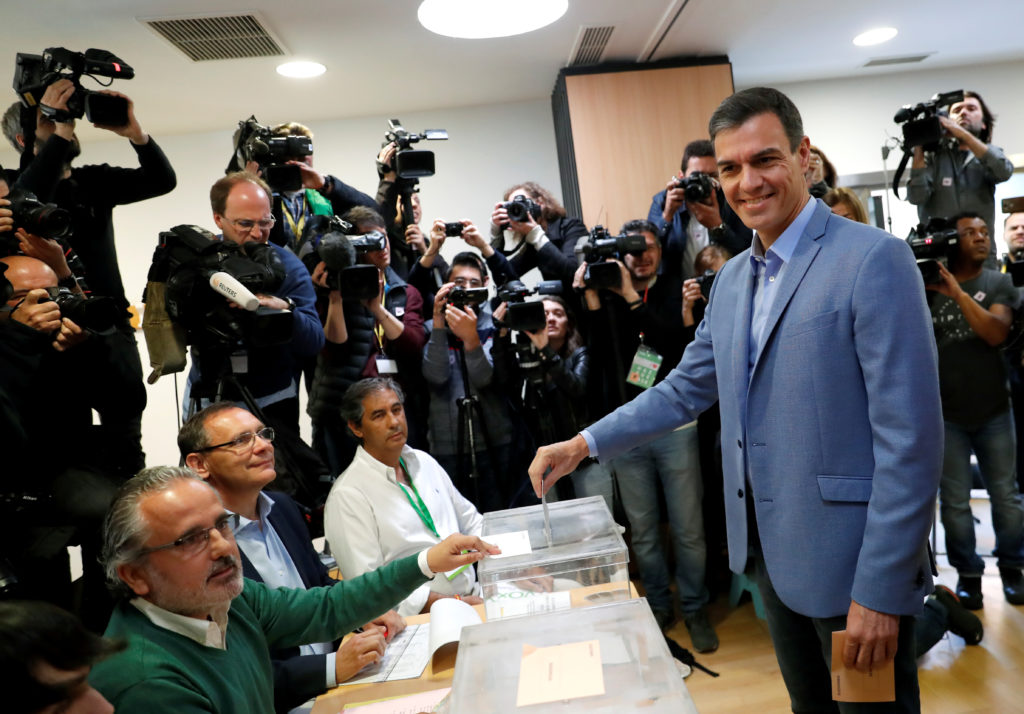 The fragmentation of the political landscape is the result of austerity that followed a recession, disenchantment with bipartisan politics and the recent rise of far-right populism.

Sánchez called Sunday’s ballot after a national budget proposal was rejected in the Lower Chamber by the center-right-conservative opposition and Catalan separatists pressing for self-determination in their northeastern region.

Polls a week ago found that about one third of the nearly 37 million eligible voters hadn’t decided how they would vote. Their decision, and the expected high turnout, could swing the result between the left and right wing blocs that have taken shape during the electoral race.

The anti-austerity Unidas Podemos (United We Can) party, has offered to enter a coalition with the Socialists, but they might need to rely on smaller parties, including the Catalan separatists. 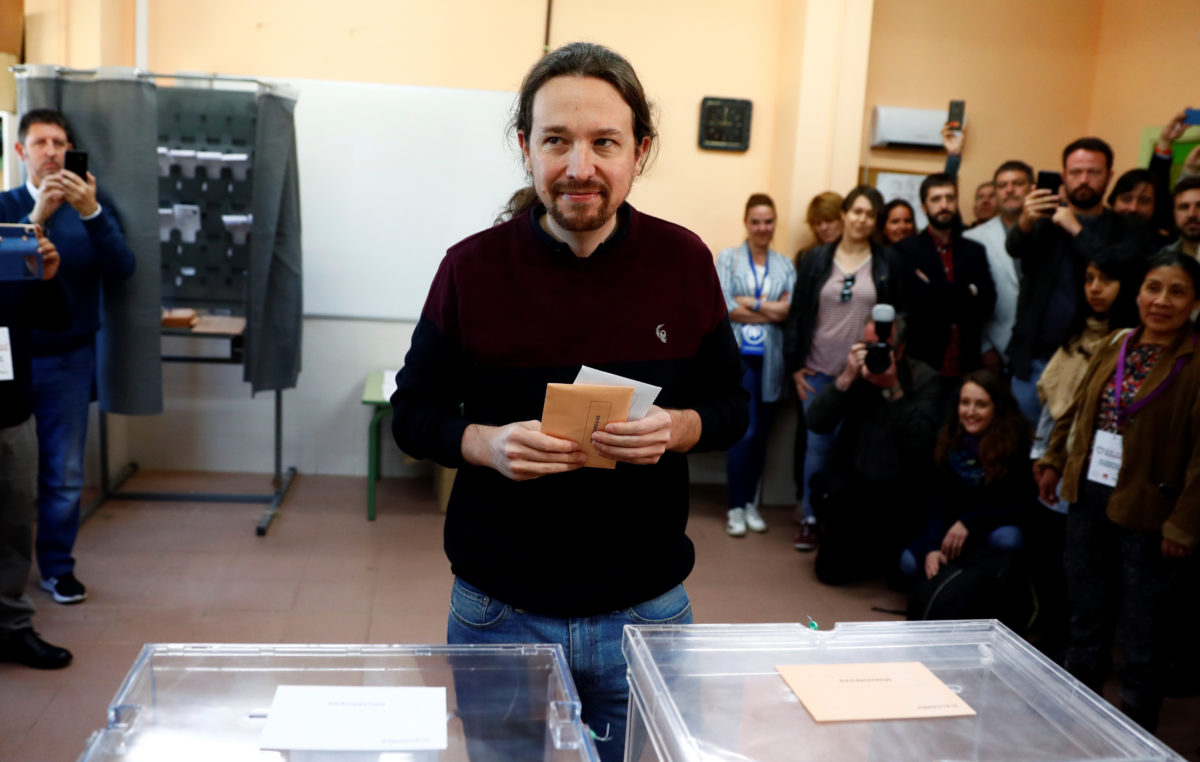 Unidas Podemos’ (Together We Can) candidate Pablo Iglesias casts his vote during Spain’s general election in Galapagar, Spain, April 28, 2019. Photo by Juan Medina/Reuters

On the splintered right, three parties are competing for leadership: the once-dominant conservative Popular Party (PP), the center-right Citizens, and the nationalist and anti-migrant Vox party, which looks set to enter the lower house of Parliament for the first time. Its arrival would mark a big shift in Spain, where the far right has not played a significant role since the country’s transition to democracy following the death of dictator Gen. Francisco Franco in 1975. 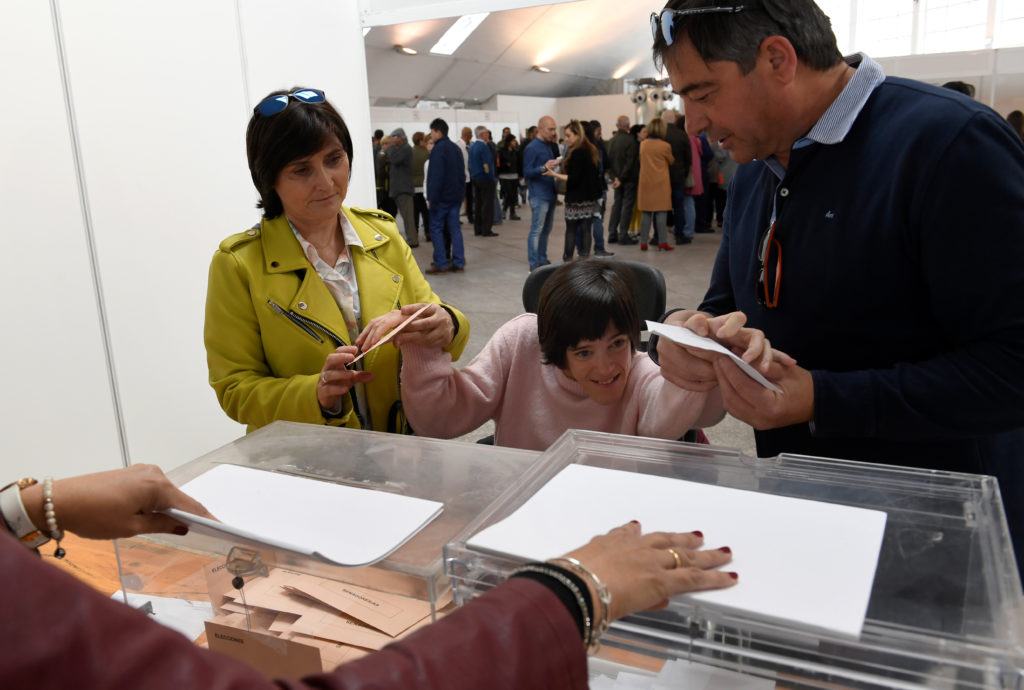 Laura Sanchez Herrero is helped by relatives to exercise her right to vote, during Spain’s general election, in Pola de Siero, April 28, 2019. For the first time in Spain people with intellectual disabilities have the right to vote. Photo by Eloy Alonso/Reuters

Speaking Sunday shortly after casting his ballot, Sánchez said he wanted the ballot to yield a parliamentary majority that can undertake social and political reforms in the country.

The prime minister said he wanted the lower house to support “a stable government that with calmness, serenity and resolution looks to the future and achieves the progress that our country needs in social justice, national harmony and political cleansing.”

Citizens and PP have focused their campaigns on unseating Sánchez, hinting at repeating the coalition government that with the help of Vox’s parliamentary backing ousted the Socialists from more than three decades in power in the southern Andalusia region earlier this year.

Citizens’ Albert Rivera said that a high turnout was needed Sunday to “usher in a new era.”

Pablo Casado, who recently took over leadership of the conservative PP and has steered it to the right in an effort to stop the draining of votes to Vox, called the ballot the country’s “most decisive” in recent years. 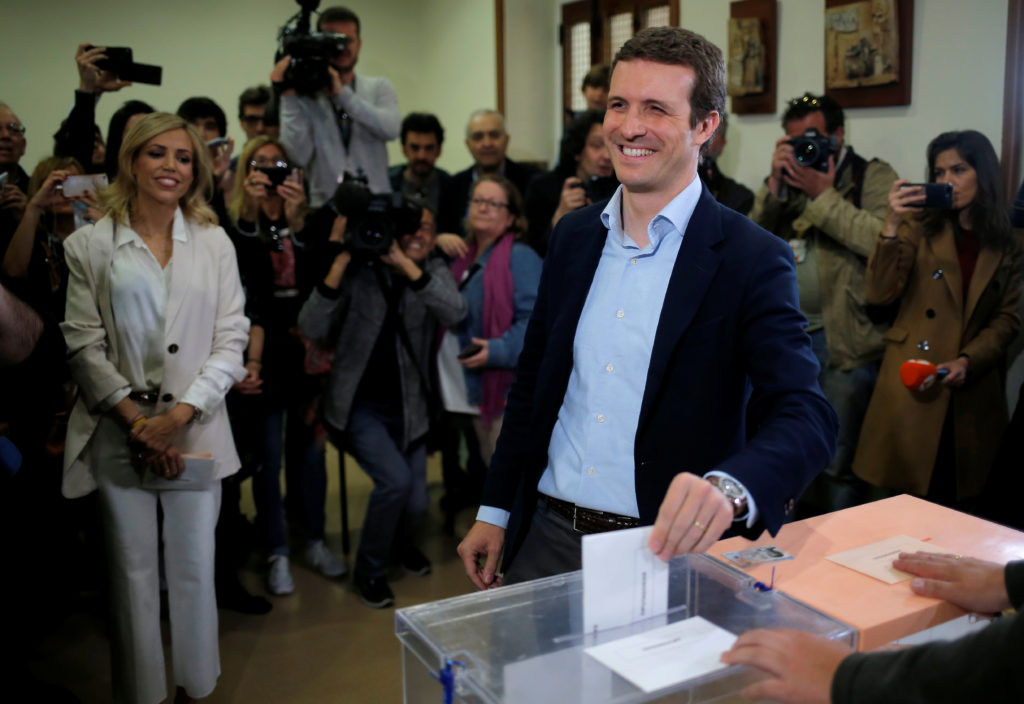 United We Can party leader Pablo Iglesias also stressed the importance of voting on Sunday.

“My feeling is that in Spain there is an ample progressive majority, and when there is high participation that becomes very clear,” Iglesias said.

Vox leader Santiago Abascal, who has been drawing the largest crowds during campaigning, told reporters in Madrid that “millions of Spaniards are going to vote with hope, they are going to do it without fear for anything or anybody.” 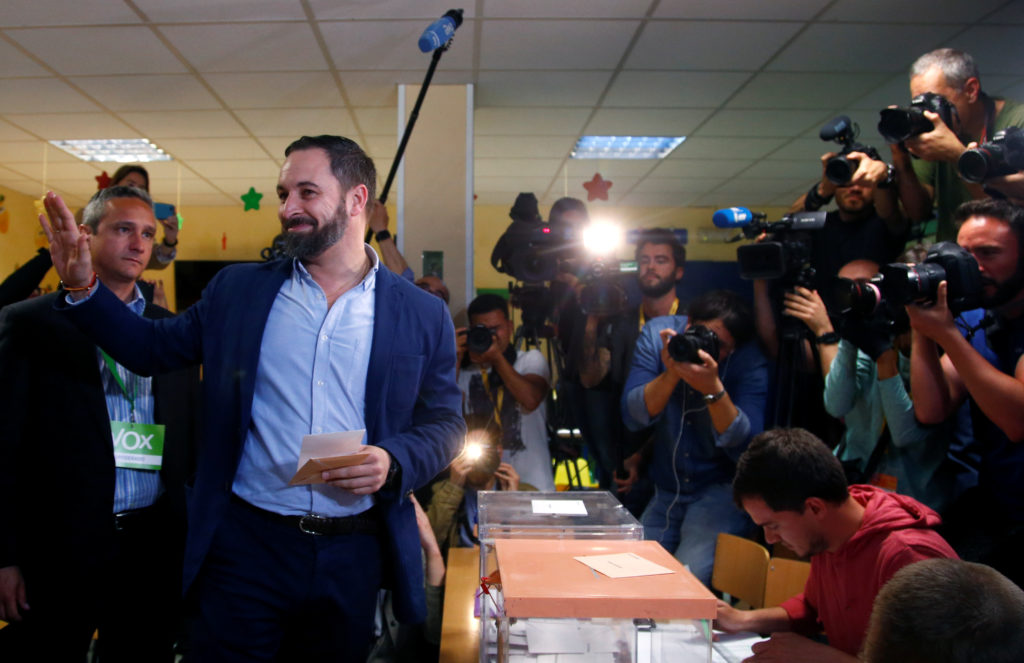 At the Palacio Valdes public school in central Madrid, voter Alicia Sánchez worried that the nationalist party could influence policy-making if they score a significant power grab on Sunday.

“I’ve always come to vote, but this time it feels special. I’m worried about how Vox can influence policies on women and other issues. They are clearly homophobic. Reading their program is like something from 50 years ago,” said the 38-year old administrative worker.

Having voted in all elections since Spain returned to democratic rule four decades ago, Amelia Gómez and Antonio Román, she 86 and he 90, said they had little faith in any candidate.

“All I want is for whoever wins to take care of the old people,” Gómez said, complaining that the two of them together receive less than 1,000 euros (1,100 euros) a month in state pensions.

The vote will decide the 350 members of the Congress of Deputies, who then choose a government, and also 208 senators for the Upper House.

For the first time since Spain transitioned to democracy in the 1970s, more than 100,000 people with mental disabilities are allowed to vote in the general election.