MADRID — As Christians around the world observed a Good Friday like no other, at home watching livestreams instead of at church, pressure mounted on governments to restart some industries and fend off further economic devastation from the coronavirus.

Worldwide, the death toll headed toward 100,000, with the confirmed number of infected topping 1.6 million, according to Johns Hopkins University. Another 355,000 have recovered. The true numbers are believed to be much higher because of limited testing, different rules for counting the dead and cover-ups by some governments.

In addition to the lives lost, the pandemic has sideswiped economies around the world. The head of the International Monetary Fund has warned that the global economy is headed for the worst recession since the Depression. The U.N. labor organization says 195 million full-time jobs could be lost in the second quarter alone.

In Europe, the 19 countries that use the euro currency overcame weeks of bitter divisions to agree on spending $550 billion to cushion the recession caused by the virus. Mario Centeno, who heads the eurozone finance ministers’ group, called the package “totally unprecedented… Tonight Europe has shown it can deliver when the will is there.”

As weeks of lockdowns were being extended in nation after nation, governments were pressed to ease restrictions on key businesses and industries. 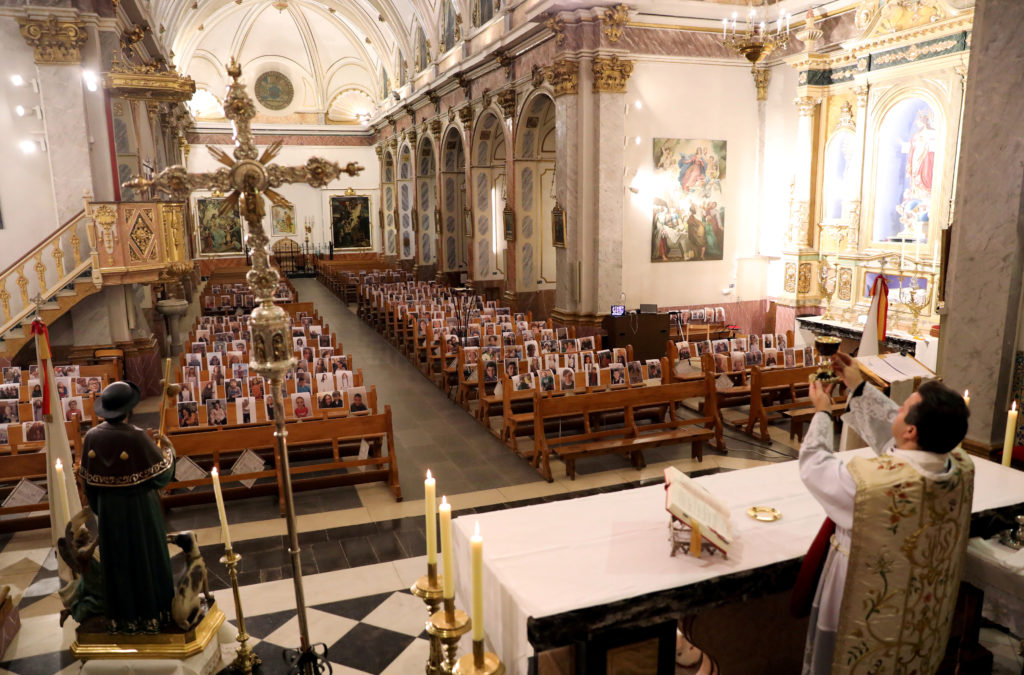 Priest Raul Garcia officiates a Holy Week mass in front of pictures of the faithful of the Nuestra Senora de la Paz church, placed on the church’s benches, during the coronavirus disease (COVID-19) outbreak, in the Villar del Arzobispo village, near Valencia, Spain. Photo by Nacho Doce/Reuters

The Spanish government was meeting to establish a 20 billion-euro fund to help small businesses and the self-employed cope with the economic fallout of the outbreak. After a two-week freeze of all non-essential economic activity, factories and construction sites in Spain can resume work Monday, while schools, most shops and offices will remain closed.

Spanish authorities say they trust that plans to allow non-essential workers back into factories and construction sites won’t cause a significant surge in infections.

Yet some experts warned that relaxing the two-week “hibernation” of economic activity comes too early.

In Italy, the industrial lobbies in regions representing 45% of the country’s GDP urged the government to ease its lockdown on all non-essential manufacturing imposed two weeks ago.

The lobbies in Lombardy, Emilia Romagna, Piedmont and Veneto regions said if their industries don’t relaunch “in a short period, the country risks definitively shutting down its own motor, and every day that passes the risk grows not to be able to restart it.’’

Malaysia’s prime minister on Friday announced a two-week extension to the country’s lockdown until April 28 but said selected economic sectors can reopen in phases while following strict hygiene rules.

The Association of Southeast Asian Nations endorsed several steps to fight the pandemic, including creating a COVID-19 response fund, sharing information and strategies to ease impact of the crisis that aid group Oxfam International estimates could push half a billion people worldwide into poverty.

In April, millions of Christians, Jews and Muslims around the world mark Easter, Passover and Ramadan — some of the holiest observances of the year. But how are followers of these religions expressing faith and community when the pandemic makes traditional gatherings impossible? John Yang reports.

In the Kenyan capital of Nairobi, people desperate for a planned food distribution briefly stampeded, pushing through a gate at a district office in Kibera slum. Police fired tear gas, injuring several people.

Travel restrictions in many African countries are creating widespread pain for low-income workers who often have little or no savings.

In a measure of just how fast the coronavirus is bringing world economies to their knees, a staggering 16.8 million Americans have lost their jobs in three weeks, with more expected to follow. The U.S. unemployment rate in April could hit 15% — a number not seen since the end of the Great Depression.

President Donald Trump brushed off fears the U.S. economy won’t quickly rebound, saying he had a “strong feeling” that “the economy is going to do very well.” The U.S. Federal Reserve announced it will provide up to $2.3 trillion in loans for households and businesses.

In Japan, the world’s third largest economy, many have criticized Prime Minister Shinzo Abe for being too slow to action against the pandemic. In a rare rebuke, the Japanese prefecture of Aichi, home to the Toyota car company, declared its own state of emergency Friday, saying it cannot wait for the government.

“The situation is critical,” said Aichi Gov. Hideaki Omura. “We decided to do everything we can to protect Aichi residents’ lives and health.”

Japan has the world’s oldest population and COVID-19 can be especially serious for the elderly.

Toyota CEO Akio Toyoda said he was worried the Japanese economy might be destroyed before the world can win the fight against the virus.

In some of the worst-hit countries, Italy and Spain, new infections, hospitalizations and deaths have been leveling off. But the daily tolls remain shocking.

The 605 new deaths announced Friday in Spain were the lowest increase since March 24. The coronavirus has claimed at least 15,843 lives there and has officially infected 152,446 people, although both the rate of contagion and mortality are dropping.

British Prime Minister Boris Johnson was moved out of intensive care after spending three nights there being treated for the virus. The 55-year-old remained hospitalized in London. His father, Stanley Johnson, said the prime minister needed to “rest up” and was unlikely to be back at work imminently.

A spike in deaths in Britain and New York show the battle is far from over.

New York state reported a record-breaking number of dead for a third straight day Thursday, 799. More than 7,000 people have died there, accounting for almost half the U.S. death toll of more than 16,500.

“That is so shocking and painful and breathtaking, I don’t even have the words for it,” New York Gov. Andrew Cuomo said.

Politicians and public health officials have warned that the hard-won gains against the pandemic must not be jeopardized by relaxing social distancing over the Easter holiday weekend.

Major religious denominations were holding virtual services on television or online. Others arranged prayer at drive-in theaters, where people can stay in their cars.

In locked-down Paris, fire-scarred Notre Dame Cathedral was coming back to life briefly. Just days before the first anniversary of the April 15 inferno that ravaged the landmark, the French capital’s archbishop was leading Good Friday celebrations in proceedings that were broadcast live.

Becatoros reported from Athens, Greece. Associated Press journalists around the world contributed to this report.

How state and city officials around the U.S. are preparing for virus surge