PARIS — French yellow vest protesters set life-threatening fires, smashed up luxury stores and clashed with police Saturday in the 18th straight weekend of demonstrations against President Emmanuel Macron. Large plumes of smoke rose above the rioting on Paris’ landmark Champs-Elysees Avenue, and a mother and her child were just barely saved from a building blaze.

French police tried to contain the demonstrators with tear gas and water cannon with limited success. 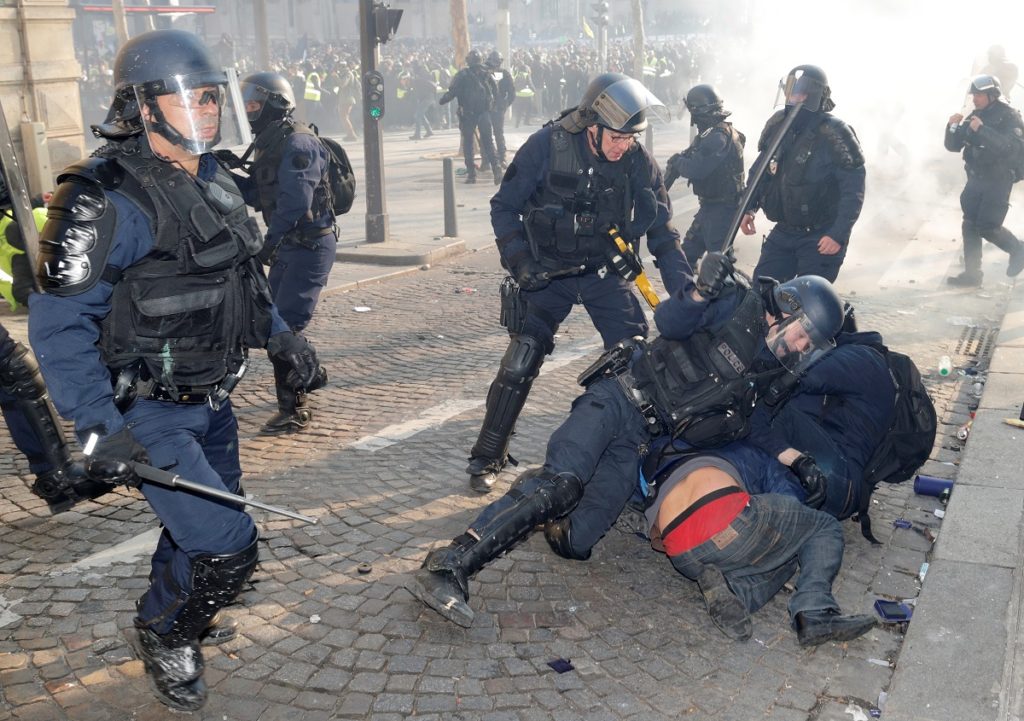 French riot police detain a protester during a demonstration by the “yellow vests” movement in Paris, France, March 16, 2019. Photo by Philippe Wojazer, Reuters

One perilous fire targeted a bank on the ground floor of a seven-story residential building. As firetrucks rushed over, a mother and her child were rescued as the fire threatened to engulf their floor, Paris’ fire service told The Associated Press. Eleven people in the building, including two firefighters, sustained light injuries, as other residents were evacuated to safety.

Newsstands burn in Paris as French yellow vests protest against their president for the 18th straight weekend https://t.co/UDh8iT3FEG pic.twitter.com/pUxdn8iR6g

The rioting comes at the end of a two-month national debate that Macron organized to respond to protesters’ concerns about sinking living standards, stagnant wages and high unemployment.

After the weekly protests dwindled recently, protesters were hoping to breathe new life into their movement against a president who they see as favoring the elite.

The violence started Saturday when protesters threw smoke bombs and other objects at officers along the famed avenue — scene of repeated past rioting — and started pounding on the windows of a police van, prompting riot police to retreat.

Simultaneous fires were also put out from two burning newspaper kiosks, which sent black smoke high into the sky. Several protesters smiled as they posed for a photo in front of one the kiosk’s charred remains.

Demonstrators also targeted symbols of the luxury industry, as shops including brands Hugo Boss and Lacoste were smashed up and pillaged, and mannequins thrown out of the broken windows. A posh eatery called Fouquet’s, which is associated with politicians and celebrities, was vandalized and set on fire. A vehicle burned outside the luxury boutique Kenzo, one of many blazes on and around the Champs-Elysees. 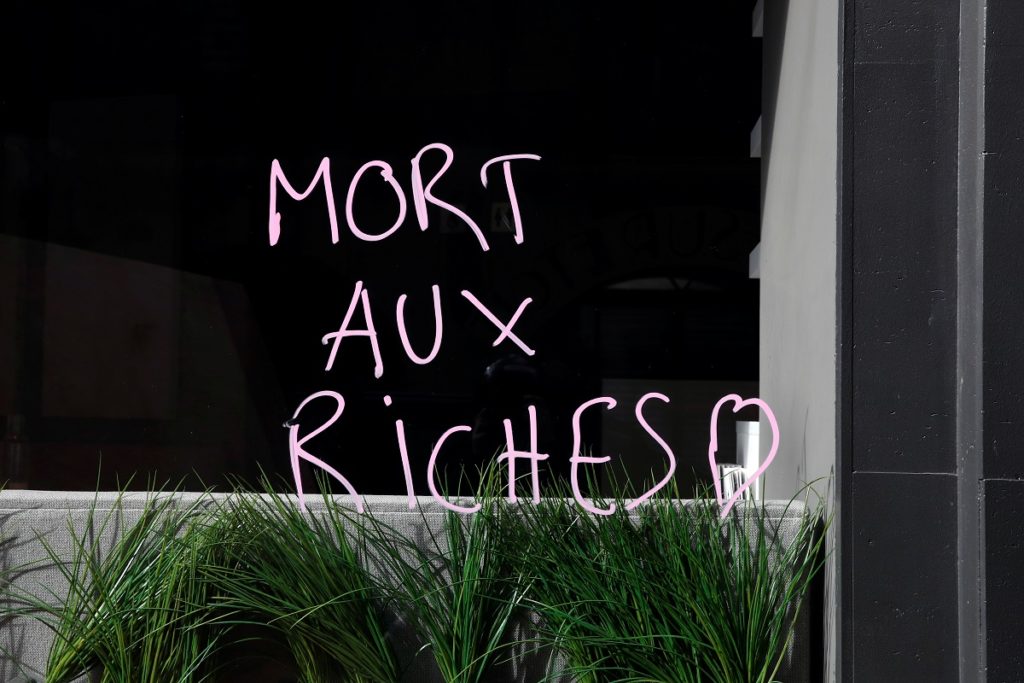 Graffiti reads “Death to the rich” near a burnt Tarneaud Bank near the Champs-Elysees avenue, during clashes with riot police forces during a demonstration by the “yellow vests” movement in Paris, France, March 16, 2019. REUTERS/Benoit Tessier – RC1DDAF4E6C0

Interior Minister Christophe Castaner said up to 8,000 demonstrators were in Paris on Saturday, including 1,500 “ultraviolent ones that are there to smash things up.”

Castaner ordered police to retaliate against these “inadmissible” acts, condemning those who “call for violence and are here to ferment chaos in Paris.”

Paris police told The Associated Press that 82 people were arrested by mid-afternoon. Police closed down several streets and fanned out around the Right Bank.

Yellow vest groups representing teachers, unemployed people and labor unions were among those that organized dozens of rallies and marches Saturday in the capital and around France.

Protesters dismiss Macron’s national debate on the economy as empty words and a campaign ploy by Macron to gain support for the European Parliament elections in May. Protesters are angry over high taxes and Macron policies seen as coddling business.

“Those who participated in this great debate are mostly retirees and upper middle class, meaning Macron’s electorate, even though we understood this great national debate was supposed to respond to the yellow vest crisis,” lawyer and protester Francois Boulo told Europe-1 radio.

Left: A burning barricade is seen during a demonstration by the "yellow vests" movement in Paris, France, March 16, 2019. Photo by Philippe Wojazer, Reuters