MOSCOW (AP) — Russian opposition leader Alexei Navalny, who has been in a coma for more than a day, will be flown to Berlin for treatment.

The reversal came after more than 24 hours of wrangling over Navalny’s condition and treatment.

“At this moment, we took the decision that we aren’t opposed to his transfer to the other hospital,” Anatoly Kalinichenko, deputy chief doctor of Omsk Ambulance Hospital №1 said in a press conference outside the hospital.

Navalny, a 44-year-old politician and corruption investigator who is one of Russian President Vladimir Putin’s fiercest critics, was admitted to an intensive care unit in the Siberian city of Omsk on Thursday.

The German doctors later examined Navalny and said he was fit to be transported, according to a representative of the charity that has organized the plane to bring him to Berlin.

A plane with German specialists and equipment necessary to transfer Navalny landed at Omsk airport on Friday morning, prepared to take the politician to a top clinic in Berlin. Doctors at the Siberian hospital initially said his condition was too unstable to transport him.

Navalny’s supporters denounced the medical verdict as a ploy by the authorities to stall until any poison would no longer be traceable in his system. But a senior doctor in Omsk said no poison had been so far found in Navalny’s body.

Kremlin spokesman Dmitry Peskov said he wasn’t aware of any instructions to stop the transfer and that it was purely a medical decision.

“It may pose a threat to his health,” Peskov said.

WATCH: Is Putin’s ‘paranoia’ to blame for apparent poisoning of Russian opposition leader?

Leonid Volkov, a close associate of Navalny, said Friday that German doctors now have access to him after they were initially not allowed to see him.

Volkov said even though that was good news, Navalny’s family and allies still lacked any reliable “independent data” on his condition and were standing by their demand that he needs to be brought to Germany.

“We are still very far away from having this situation resolved,” he said at a news conference.

Navalny’s wife told reporters that hospital staff and men she suspected were law enforcement operatives didn’t let her speak to the German specialists, who she said were brought into the facility in secrecy, through a back door.

“I was forcibly kicked out in a rude manner,” Yulia Navalnaya said, her voice shaking. “This is an appalling situation. They are not letting us take Alexei. We believe that clearly something is being hidden from us.” 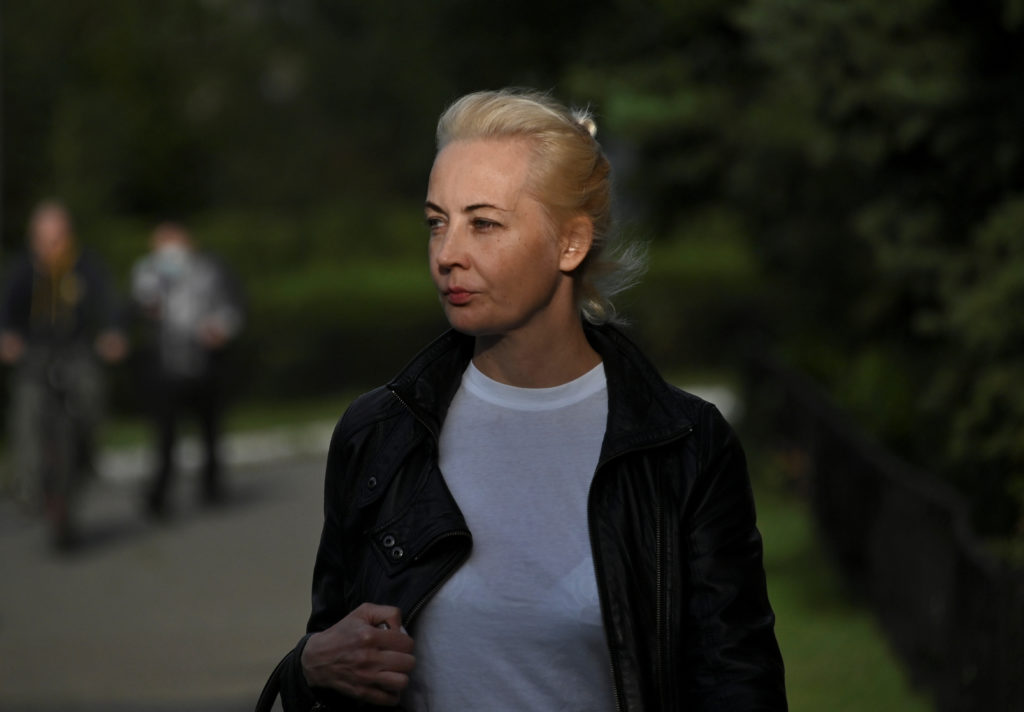 Yulia Navalnaya, wife of Russian opposition leader Alexei Navalny walks near a hospital, where Alexei receives medical treatment in Omsk, Russia August 21, 2020. Navalny was taken ill with suspected poisoning en route from Tomsk to Moscow on a plane, which made an emergency landing in Omsk. REUTERS/Alexey Malgavko

She submitted a written request for a transfer on Friday to Putin.

The most prominent member of Russia’s opposition, Navalny campaigned to challenge Putin in the 2018 presidential election but was barred from running. His Foundation for Fighting Corruption has been exposing graft among government officials, including some at the highest level. Last month, he had to shut the foundation after a financially devastating lawsuit from a businessman with close ties to the Kremlin.

Navalny fell ill on a flight back to Moscow from Siberia on Thursday and was taken to the hospital after the plane made an emergency landing. His team made arrangements to transfer him to Charité, a clinic in Berlin that has a history of treating famous foreign leaders and dissidents and insisted that the transfer is paramount to saving the politician’s life.

“The ban on transferring Navalny is needed to stall and wait until the poison in his body can no longer be traced. Yet every hour of stalling creates a threat to his life,” Navalny’s spokesperson, Kira Yarmysh, tweeted.

German officials have been in contact with both Russians and a private group that sent a plane to pick Navalny up.

Dr. Yaroslav Ashikhmin, Navalny’s physician in Moscow, told The Associated Press on Friday that there are no conditions, with the exception of severe and multiple traumas, in which patients can not be transported these days.

Being on a plane with specialized equipment, including a ventilator and a machine that can do the work of the heart and lungs, “can be even safer than staying in a hospital in Omsk,” Ashikhmin said.

Yarmysh posted pictures of what she said was a bathroom inside the hospital that showed squalid conditions, including walls with paint peeling off, rusting pipes, and a dirty floor and walls.

While his supporters and family members continue to insist that Navalny was poisoned, Omsk hospital deputy chief doctor, Anatoly Kalinichenko, said that doctors didn’t find any trace of poison and don’t “believe the patient suffered from poisoning.”

Omsk news outlet NGS55 published a video statement of the hospital’s chief doctor, Alexander Murakhovsky, saying that a metabolic disorder was the most likely diagnosis and that a drop in blood sugar may have caused Navalny to lose consciousness.

Navalny will remain in Omsk until his condition stabilizes, Murakhovsky said on Friday evening after a meeting with German doctors.

“They’re not allowing the transport of Alexei because of a metabolic disorder and a plunge in blood sugar?!” Ivan Zhdanov, a close ally of Navalny, said in a tweet.

Another doctor with ties to Navalny, Dr. Anastasia Vasilyeva, who flew to Omsk with the politician’s wife on Thursday, said poisoning with a toxic substance could have caused a metabolic disorder.

Ashikhmin, who’s been Navalny’s doctor since 2013, said the politician has always been in good health, regularly went for medical checkups and didn’t have any underlying illnesses that could have triggered his condition.

European Union spokeswoman Nabila Massrali said Friday the the 27-nation bloc expects “a swift, independent, transparent investigation” into what happened to Navalny. The EU and urged Russian authorities to “stand by their promises to allow Mr. Navalny to be safely and speedily transferred abroad in order to receive medical treatment in line with the wishes of his family,” she said.

Like many other opposition politicians in Russia, Navalny has been frequently detained by law enforcement and harassed by pro-Kremlin groups. In 2017, he was attacked by several men who threw antiseptic in his face, damaging an eye.

Last year, Navalny was rushed to a hospital from prison, where he was serving a sentence following an administrative arrest, with what his team said was suspected poisoning. Doctors said he had a severe allergic attack and discharged him back to prison the following day.

Navalny set up campaign offices across Russia and has been promoting opposition candidates in regional elections, challenging members of the ruling party, United Russia. One of his associates in Khabarovsk, a city in the country’s Far East that has been engulfed in mass protests against the arrest of the region’s governor, was detained last week after calling for a strike at a rally.

Left: Alexander Murakhovsky, chief doctor of a hospital, where Alexei receives medical treatment, speaks with the media in Omsk, Russia August 21, 2020. Alexei Navalny began feeling ill, en route from Tomsk to Moscow, on a plane which made an emergency landing in Omsk due to his serious condition. REUTERS/Alexey Malgavko TPX IMAGES OF THE DAY

Is Putin’s ‘paranoia’ to blame for apparent poisoning of Russian opposition leader?