Who Is Alexei Navalny and Why Is He on Trial in Russia? 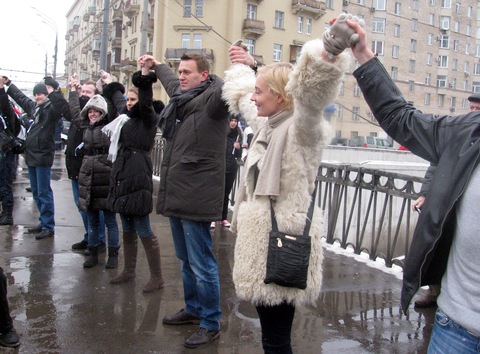 Alexei Navalny, second from right, takes part in an anti-government protest in Moscow in February 2012. Photo by Morgan Till/PBS NewsHour.

Russian lawyer and political activist Alexei Navalny faces 10 years in prison for embezzlement charges in a trial that resumed this week in Russia.

His defenders call the trial politically motivated — retribution, they say, for his blogs critical of Russian President Vladimir Putin and his United Russia party, which Navalny famously labeled the party of “crooks and thieves.”

The criminal charges against Navalny, 36, include stealing $500,000 from a state-owned timber company during his time as adviser to the governor of Kirov, Russia, a city about 900 miles northeast of Moscow. Despite the distance, more than 100 people reportedly made the 12-hour train ride to show their support at his trial.

According to the Associated Press, Navalny first made a name for himself by buying shares in state-run companies and using his stakeholder position to acquire internal documents that he said showed officials had siphoned off millions of dollars.

Despite a growing opposition to the government led in part by Navalny, Putin’s popularity has remained strong within the country, and he resoundingly won re-election as president in March 2012.

In a Feb. 29, 2012, interview on the PBS NewsHour, Navalny said of Putin prior to his re-election that even though he’s “a very power-hungry politician, he’s a smart, flexible person” who could lead reforms in the country.

Navalny’s hearing continues Thursday. A guilty verdict, and even a suspended sentence, would prevent Navalny from running for public office.