HONG KONG — Hundreds of silver-haired activists joined young Hong Kong protesters for a unity rally Saturday, vowing that their monthslong movement will not fade away until there is greater democracy in the Chinese territory.

The rally at a park downtown was among several peaceful gatherings by protesters this week to keep up pressure on the government amid a lull in violence following a local election victory by the pro-democracy bloc and the gaining of U.S. support for their cause.

A local boys’ band belted out songs to tell protesters that “the whole Hong Kong is supporting you.” Speakers reminded the crowd that it wasn’t time to celebrate and that the fight for real autonomy must persist.

The protesters are angry over creeping Chinese interference in Hong Kong that they say is eroding their rights promised when the former British colony returned to Chinese rule in 1997.

“The government wants us to desert the front-liners and young protesters, but we will stick with them,” rally organizer Tam Kwok-sun, 64, said to loud cheers from the crowd. “Sometimes their actions are violent and aggressive, but we are more unhappy with the government’s behavior.” 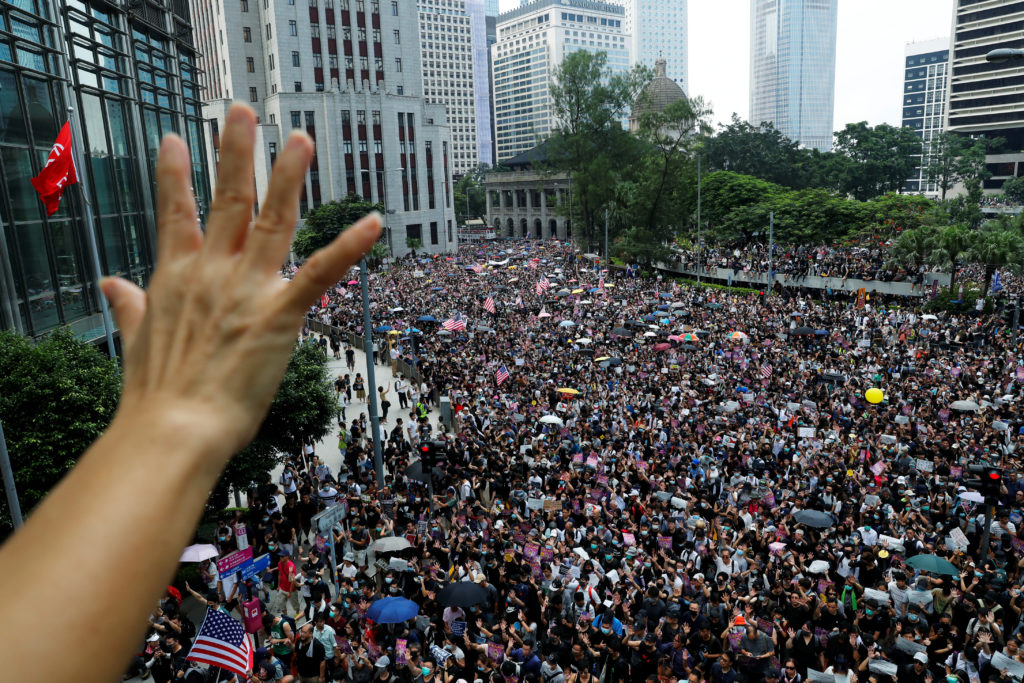 A protester holds up five fingers during a rally to the U.S. Consulate General in Hong Kong, China, September 8, 2019. Photo by Anushree Fadnavis/Reuters

Since the unrest broke out in June, protesters have disrupted traffic, smashed public facilities and pro-China shops, and hurled gasoline bombs in pitched battles with riot police who have responded with volleys of tear gas and water cannons.

The occupation of several universities by protesters earlier this month after fiery clashes with police capped one of the most violent chapters in the turmoil, which has contributed to the city’s first recession in a decade.

Hong Kong’s leader, Carrie Lam, has appealed for the current calm to continue but has refused to bow to protesters’ demands, which include free elections for her post and the legislature as well as an independent probe into alleged police brutality.

“It’s still a very early stage of the revolution,” a masked activist, who gave her name as Mai, 26, said Saturday. “People are tired physically and mentally, so we are waiting for the right moment for a fightback.”

Hong Kong police have arrested 5,890 people as a result of the protests.

“The government is still stubborn. Every one of us, young and old, must contribute in our own way. The movement will not stop,” a woman, 63, who identified herself as Mrs. Tam, said as she distributed Japanese honey candies to slogan-chanting young activists at the park. 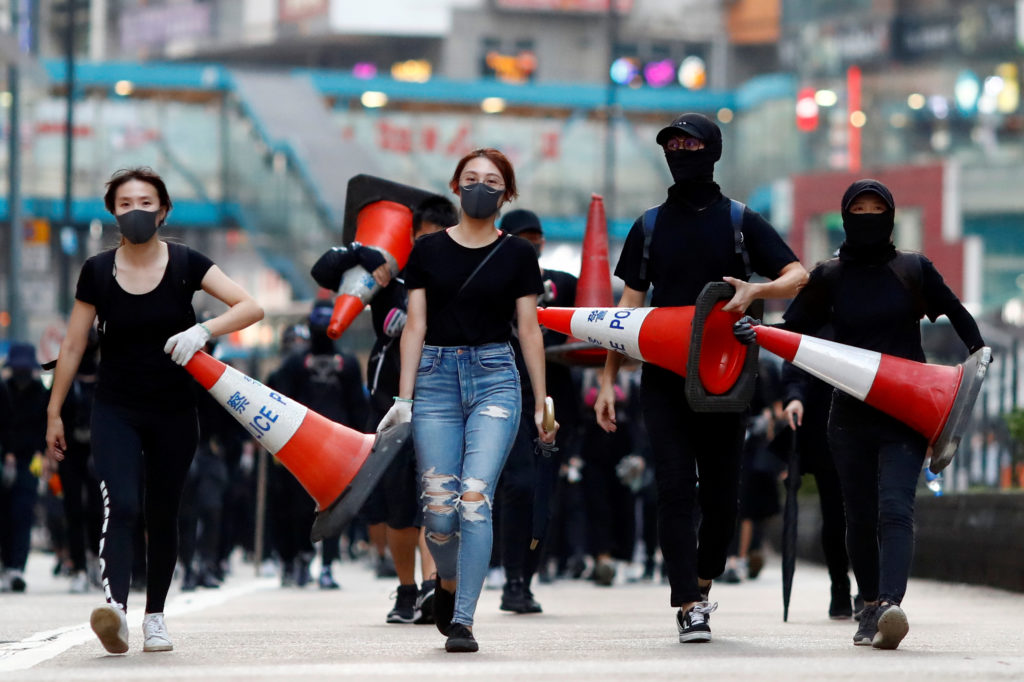 Protesters walk down the road with traffic cones to build a barricade in Causeway Bay, Hong Kong, China November 11, 2019. Photo by Thomas Peter/Reuters

Some protesters returned to the streets Saturday night, using metal fences, cartons and bricks to block traffic in the Mong Kok area in Kowloon. Dozens had gathered there to mark three months since police stormed a subway car in the area and hit passengers with batons and pepper spray. Most left after police reportedly fired pepper balls and issued warnings.

In an opinion piece Saturday in the South China Morning Post, she also urged Lam to hold an “independent and impartial judge-led investigation” into alleged use of excessive force by police to restore trust and repair rifts.

The U.S. earlier this week legislated two laws to support the protest movement. One law prescribes sanctions on officials found guilty of human rights abuses and requires an annual review of the city’s special trade status. Another bans export of nonlethal munitions to Hong Kong police.

China has warned of strong countermeasures and Hong Kong’s government has slammed the U.S. move as unwarranted meddling in its affairs.

The reports also said a Taiwanese man, Lee Meng Chu, was held for “allegedly spying and leaking China’s national secrets” and backing the Hong Kong protests. Beijing had confirmed earlier that Lee was held after he went missing during a trip to mainland China in August, but didn’t give details.

In August, a British Consulate employee in Hong Kong was arrested during a trip to the mainland and was freed 15 days later after confessing to soliciting prostitution. But Simon Cheng says it was a forced confession and that he was tortured by Chinese police and pressed for information about Hong Kong’s activists.

More rallies are being planned in Hong Kong for Sunday, including an anti-tear gas protest and a gratitude march to the U.S. Consulate.