HONG KONG — Police in Hong Kong drew their guns Sunday night after a small group of protesters attacked officers with sticks and rods, and used tear gas to clear pro-democracy demonstrators who had taken over a street.

The confrontations were the latest violence in a summer of protests that have shaken the city’s government and residents. Police also brought out water cannon trucks for the first time, though they did not use them directly on protesters.

The main showdown took place on a major drag in the outlying Tsuen Wan district following a protest march that ended in a nearby park. While a large crowd rallied in the park, a group of hard-line protesters took over a main street, strewing bamboo poles on the pavement and lining up orange and white traffic barriers and cones to obstruct police.

After hoisting warning flags, police used tear gas to try to disperse the crowd. Protesters responded by throwing bricks and gasoline bombs toward the police. The result was a surreal scene of small fires and scattered paving bricks on the street between the two sides, rising clouds of tear gas and green and blue laser lights pointed by the protesters at the police. 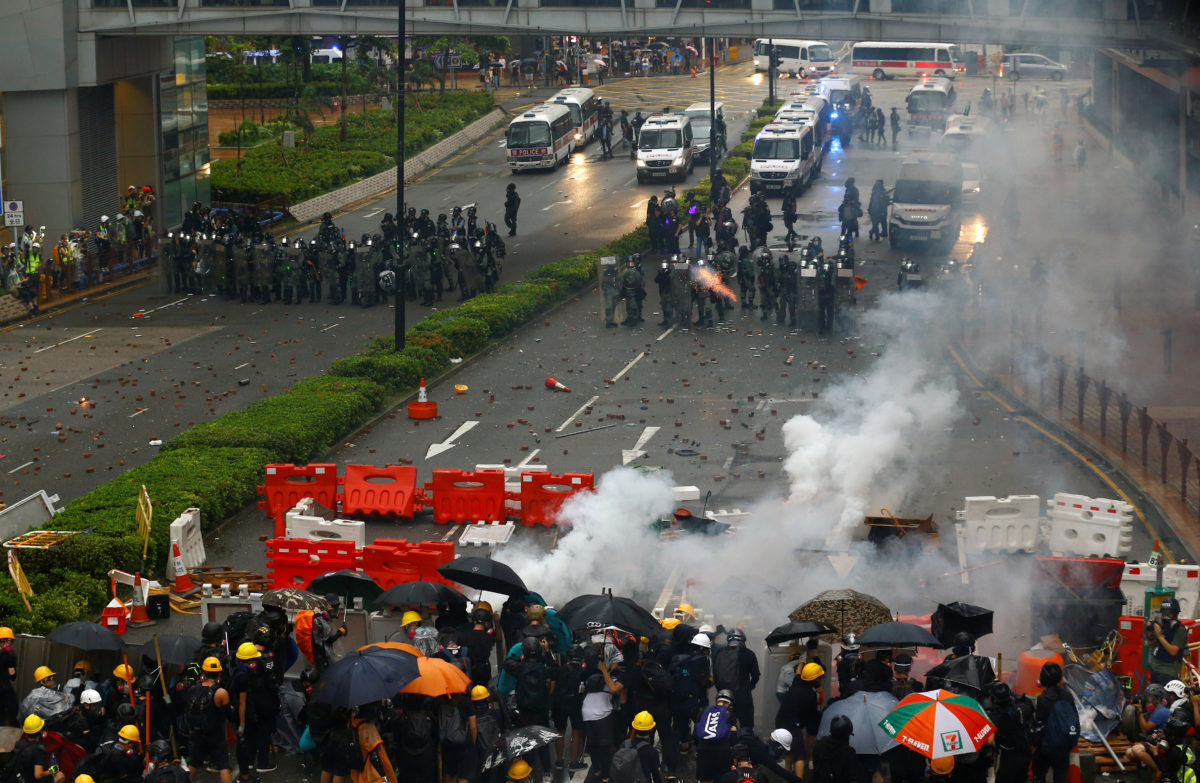 The protesters eventually decided to abandon their position. Two water cannon trucks and a phalanx of police vehicles with flashing lights joined riot police on foot as they advanced up the street. They met little resistance. Television footage showed a water cannon being fired once, but perhaps more as a test, as it didn’t appear to reach the retreating protesters.

Some protesters said they are resorting to violence because the government has not responded to their peaceful demonstrations.

“The escalation you’re seeing now is just a product of our government’s indifference toward the people of Hong Kong,” said Rory Wong, who was at the clash after the march.

One neighborhood resident, Dong Wong, complained about the tear gas.

“I live on the 15th floor and I can even smell it at home,” he said. “I have four dogs, sneezing, sneezing all day. … The protesters didn’t do anything, they just blocked the road to protect themselves.” 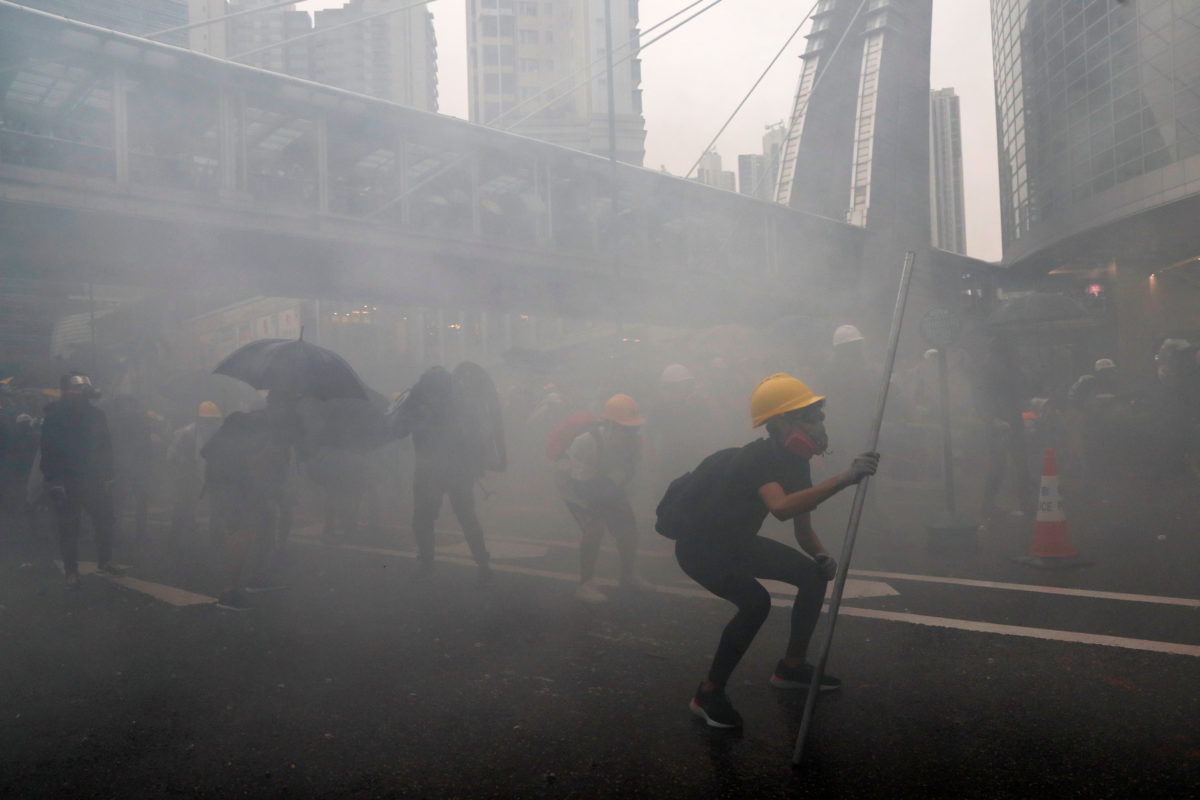 Anti-extradition bill protesters take cover from tear gas canisters as they clash with riot police during a protest to demand democracy and political reforms, at Tsuen Wan, in Hong Kong, China August 25, 2019. Photo by Tyrone Siu/Reuters.

Officers pulled their guns after protesters chased them down a street with sticks and rods, calling them “gangsters.” Public broadcaster RTHK said one of its reporters saw a uniformed officer fire a shot into the sky.

The march in Hong Kong’s New Territories started near the Kwai Fong train station, which has become a focal point for protesters after police used tear gas there earlier this month. Police with riot gear could be seen moving into position along the march route.

Protesters have taken to the semiautonomous Chinese territory’s streets for more than two months. Their demands include democratic elections and an investigation into police use of force to quell the protests. 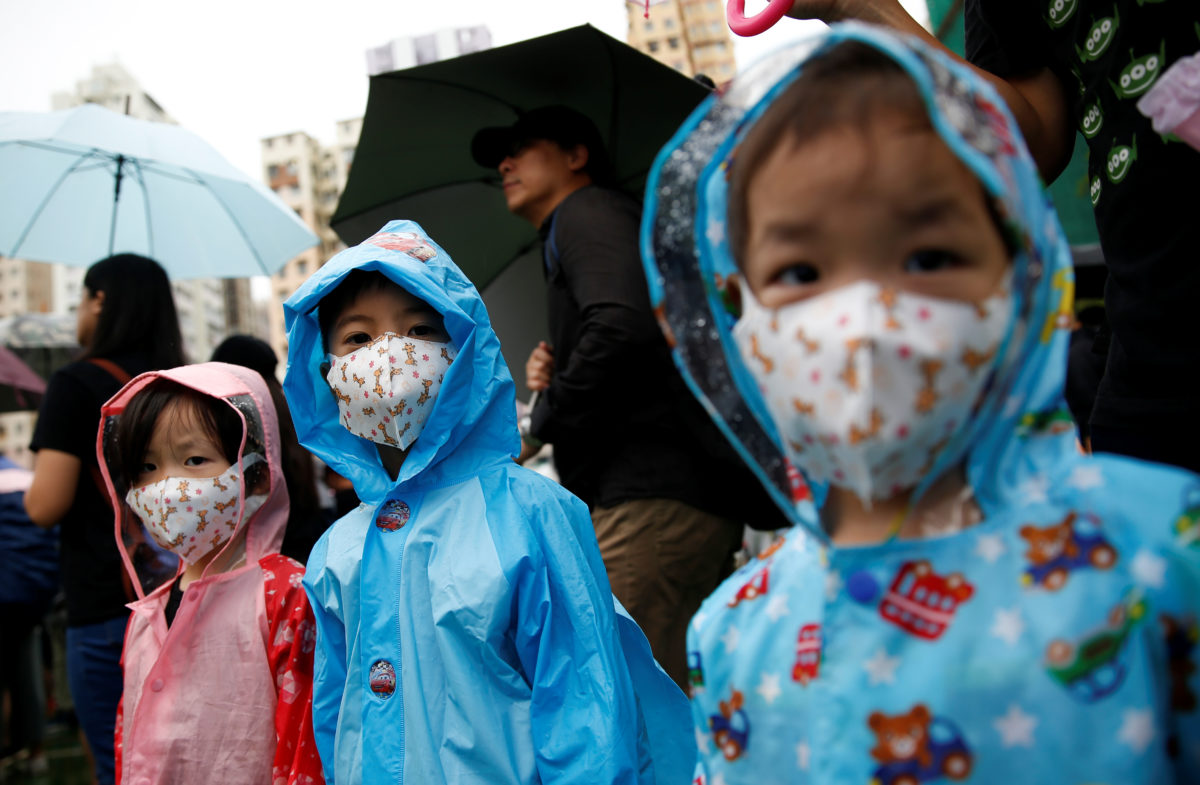 Children are pictured during a protest in Hong Kong, China, August 25, 2019. Photo by Willy Kurniawan/Reuters.

A large group clashed with police on Saturday after a march in the Kowloon Bay neighborhood, building barricades and setting fires in the streets. Police said they arrested 29 people for various offenses, including unlawful assembly, possession of offensive weapons and assaulting police officers.

The clashes, while not as prolonged or violent as some earlier ones, ended a brief lull in the violence. The protests, which began in early June, had turned largely peaceful the previous weekend, after weeks of escalating violence.

In nearby Macao, another Chinese territory, a pro-Beijing committee chose a businessman as the gambling hub’s next leader with little of the controversy surrounding the government in Hong Kong.

Ho Iat-seng, running unopposed, will succeed current leader Chui Sai-on in December. Asked about the protests in Hong Kong, the 62-year-old Ho said they would end eventually, like a major typhoon.

Protesters in Hong Kong have demanded that the city’s leader, Carrie Lam, also chosen by a pro-Beijing committee, step down, though that demand has evolved into a broader call for fully democratic elections.