HONG KONG (AP) — Hong Kong police fired tear gas and rubber bullets at protesters who had massed outside government headquarters Wednesday in opposition to a proposed extradition bill that has become a lightning rod for concerns over greater Chinese control and erosion of civil liberties in the territory.

The afternoon violence marked a major escalation in the semi-autonomous Chinese city’s biggest political crisis in years. It came after protesters earlier in the day forced the delay of a legislative debate over the bill, which would allow criminal suspects in Hong Kong to be sent for trial in mainland China.

The overwhelmingly young crowd had overflowed onto a major downtown road as they overturned barriers and tussled with police outside the government building. But when some appeared to have breached the police cordon around the building, the police launched their response, which also included firing pepper spray and water hoses. 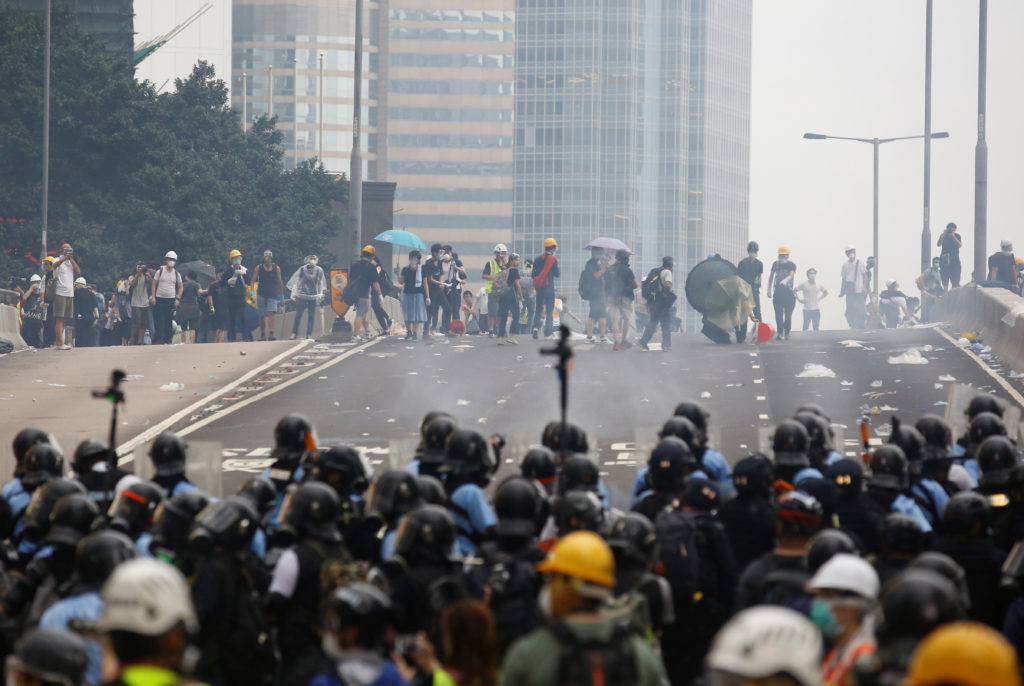 Protesters react during a demonstration against a proposed extradition bill in Hong Kong, on June 12, 2019. Photo by Thomas Peter/Reuters

Earlier, a curt government statement said the legislative session scheduled to begin at 11 a.m. would be “changed to a later time.” Officials gave no indication of when that would be and Hong Kong leader Carrie Lam canceled a scheduled news briefing.

The delay appeared to have been at least a temporary victory for the bill’s opponents, whose protests are the largest since pro-democracy demonstrations closed down parts of the Asian financial center for more than three months in 2014. Some businesses closed for the day, and labor strikes and class boycotts were called.

The protests are a challenge to China’s ruling Communist Party and President Xi Jinping, who has in the past said he would not tolerate Hong Kong being used as a base to challenge the party’s authority. But they are also giving vent to young Hong Kongers alienated by a political process dominated by the territory’s economic elite.

At a brief news conference held as the chaos swirled just outside, Police Commissioner Stephen Lo Wai-chung called the demonstration a riot. That could mean long jail terms for anyone arrested, adding to concerns that Hong Kong’s government is using public disturbance laws to intimidate political protesters.

“We condemn such irresponsible behavior,” Lo said. “There’s no need to hurt innocent people to express your opinions,” he said, adding that people should not “do anything they will regret for the rest of their lives.”

Protesters were seen throwing rocks, bottles, metal barricades and other projectiles at police. 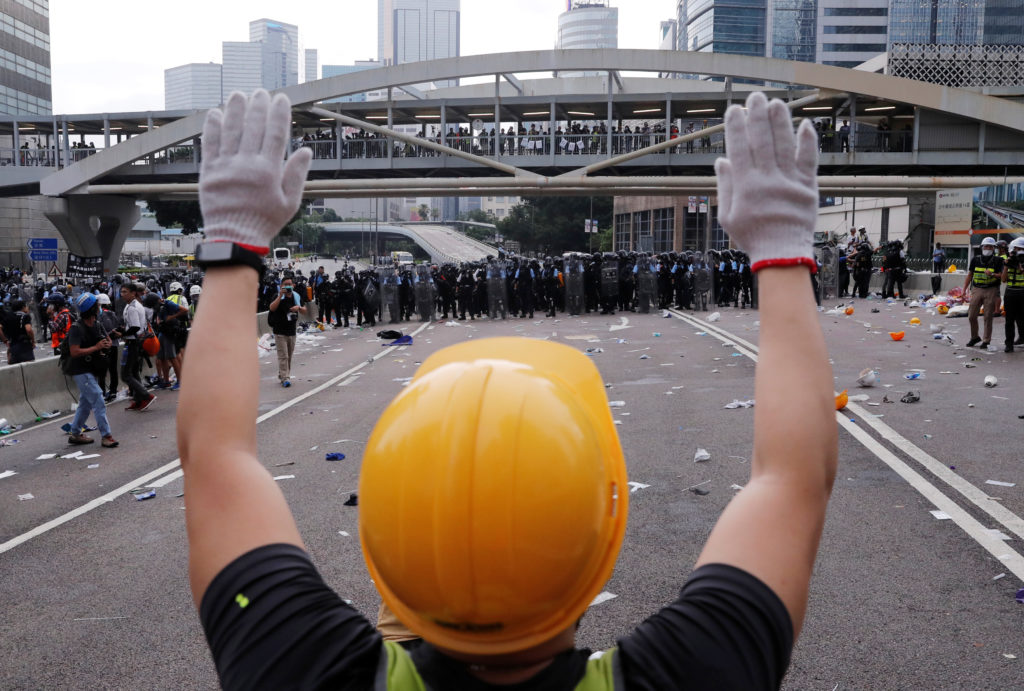 A protester gestures during a demonstration against a proposed extradition bill in Hong Kong, on June 12, 2019. Photo by Tyrone Siu/Reuters

Police spokesman Gong Weng Chun defended the decision to use tear gas and other non-lethal weapons, saying officers wouldn’t have had to do so if they weren’t facing a serious threat that could seriously injure or even kill them.

The state of the legislative process remained unclear following the violence, which had largely ended by about 5 p.m. after police herded demonstrators across a pedestrian bridge. Traffic in one of the busiest parts of the city remained blocked, however, and several hundred protesters seemed in no hurry to leave

WATCH: If bill allowing extradition to China passes, ‘nobody is safe’ in Hong Kong, says critic

Earlier in the day, protesters said they hoped the blockade would persuade Lam’s administration to shelve the proposed amendments.

“We want the government to just set the legislation aside and not bring it back,” said a protester who gave only his first name, Marco, to avoid possible repercussions from authorities.

Another protester, who gave her name only as King, also out of fear of repercussions, said the protest was a watershed moment for Hong Kong’s young generation.

“We have to stand up for our rights or they will be taken away,” she said.

Dressed in black T-shirts and jeans, many protesters appeared undaunted by demands to disperse from police. The demonstrators also appeared mindful of Beijing’s growing use of electronic surveillance such as facial recognition technology to build dossiers on those it considers politically unreliable, with many donning surgical masks to hide their features, as well as to safeguard against tear gas. 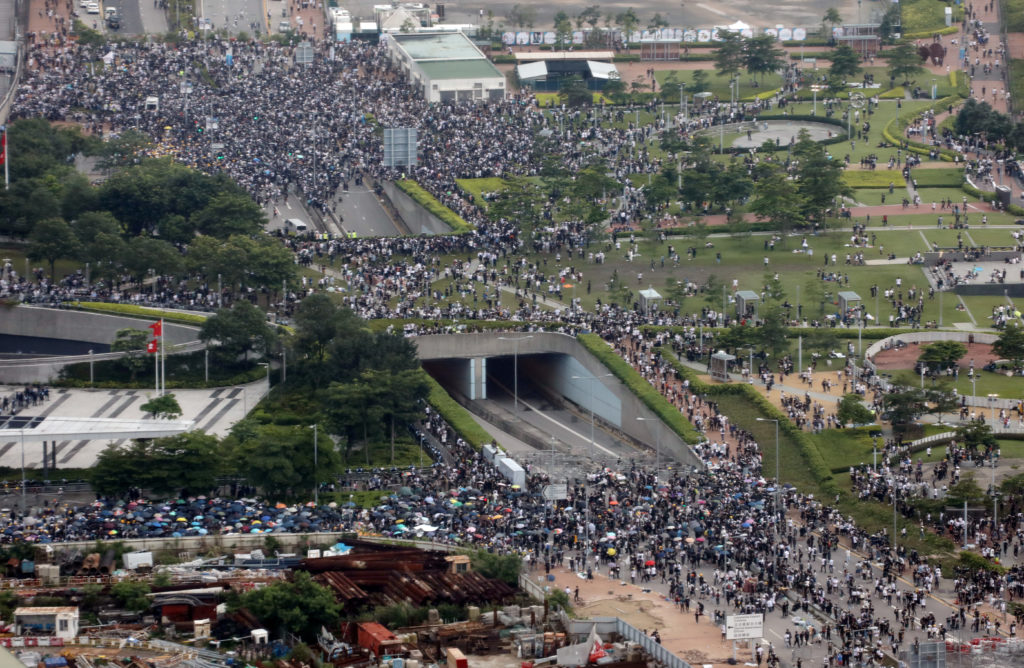 Protesters march along a road demonstrating against a proposed extradition bill in Hong Kong, June 12, 2019. Picture taken through a glass window. Photo by Athit Perawongmetha/Reuters

Such protests are never tolerated in mainland China, and Hong Kong residents can face travel bans and other repercussions if they cross the border.

“Most of these protesters don’t expect the government to compromise. They just want to express their own opinions,” said Joseph Cheng, a long-time observer of Chinese and Hong Kong politics now retired from the City University of Hong Kong.

“The anger is still there and the anger will burst again at the next opportunity,” Cheng said.

“The anger will burst again at the next opportunity.”

Under its “one country, two systems” framework, Hong Kong was supposed to be guaranteed the right to retain its own social, legal and political systems for 50 years following its handover from British rule in 1997. However, China’s ruling Communist Party has been seen as increasingly reneging on that agreement by forcing through unpopular legal changes.

The government pushed ahead with plans to present the amendments to the legislature on Wednesday despite a weekend protest by hundreds of thousands of people that was the territory’s largest political demonstration in more than a decade.

Lam has consistently defended the legislation as necessary to close legal loopholes with other countries and territories. A vote is scheduled on June 20. 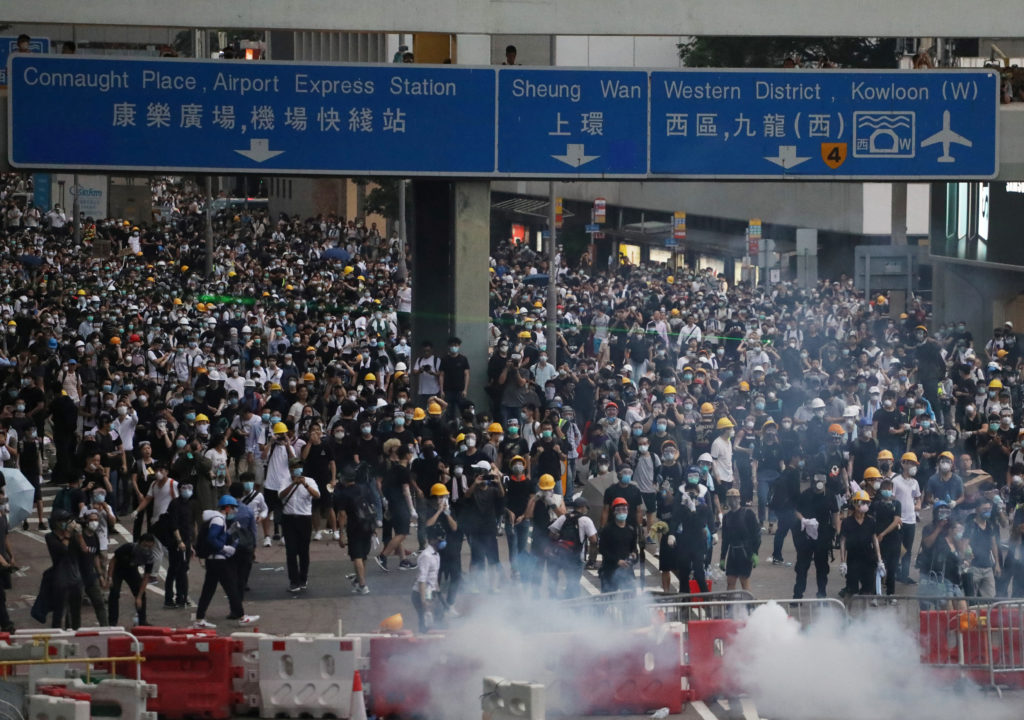 Protesters march along a road demonstrating against a proposed extradition bill in Hong Kong, China June 12, 2019. Photo by Athit Perawongmetha/Reuters

At regular briefing Wednesday, China’s Foreign Ministry repeated its support for the bill. Ministry spokesman Geng Shuang also denied Beijing has been interfering in the city’s affairs in a way that violates agreements made when Hong Kong was handed back to China.

“Hong Kong people’s rights and freedoms have been fully guaranteed in accordance with law,” he said.

The protests are widely seen as reflecting growing apprehension about relations with the Communist Party-ruled mainland, where Xi has said he has zero tolerance for those demanding greater self-rule for Hong Kong.

Critics believe the extradition legislation would put Hong Kong residents at risk of being entrapped in China’s judicial system, in which opponents of Communist Party rule have been charged with economic crimes or ill-defined national security offenses, and would not be guaranteed free trials. 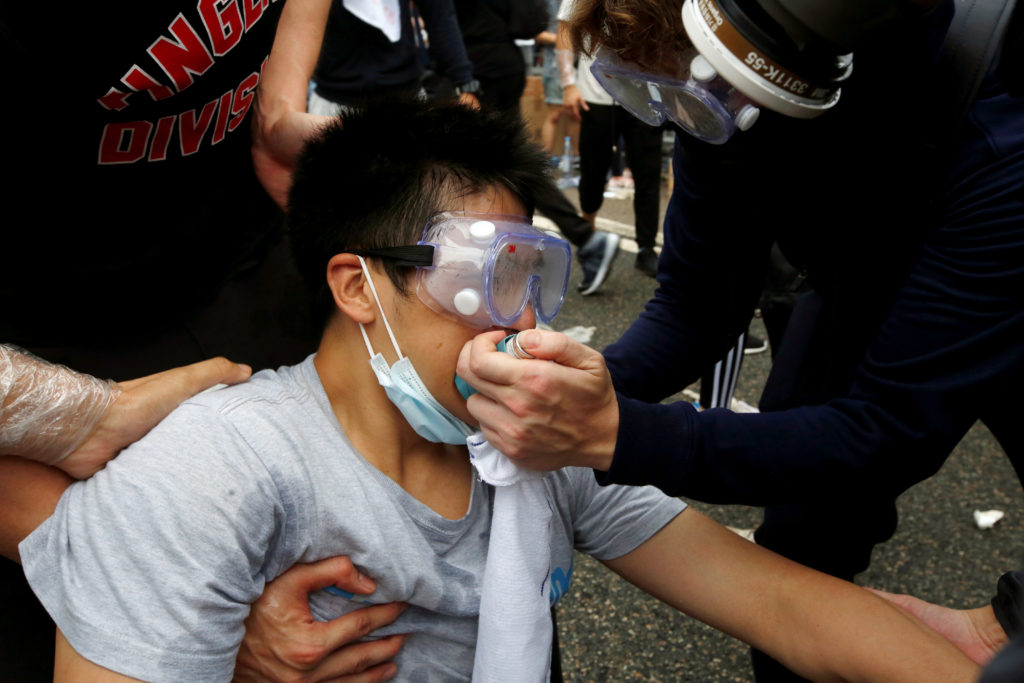 Protesters help a man during a demonstration against a proposed extradition bill where tear gas was fired, in Hong Kong, on June 12, 2019. Photo by James Pomfret/Reuters

Lam said the government has considered concerns from the private sector and altered the bill to improve human rights safeguards. She said without the changes, Hong Kong would risk becoming a haven for fugitives. She emphasized that extradition cases would be decided by Hong Kong courts.

Opponents of the proposed extradition amendments say the changes would significantly compromise Hong Kong’s legal independence, long viewed as one of the crucial differences between the territory and mainland China.

Hong Kong currently limits extraditions to jurisdictions with which it has existing agreements and to others on an individual basis. China has been excluded from those agreements because of concerns over its judicial independence and human rights record.